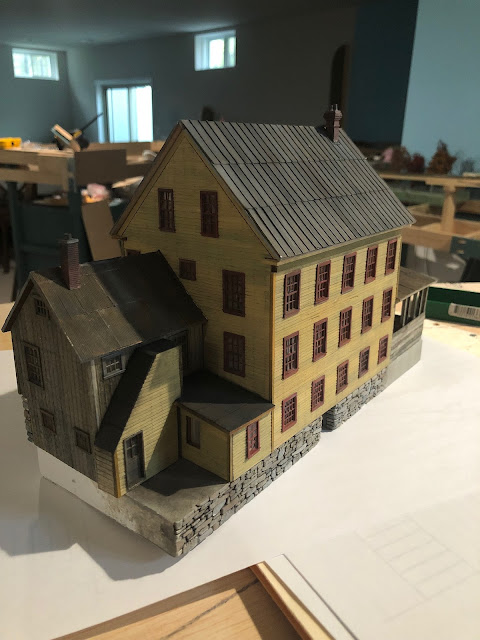 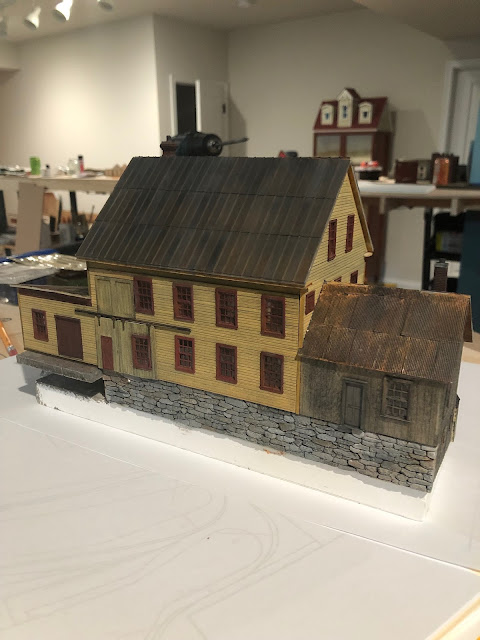 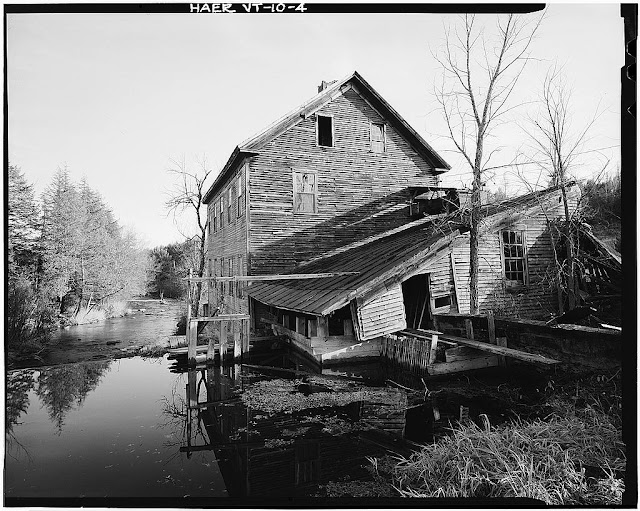 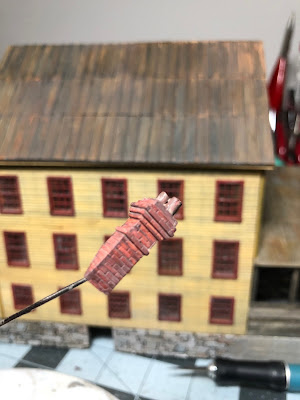 Although Thresher's Mill certainly existed in the mid 1950s, my model shows it in slightly better repair than the LOC photos and video. Meaning that it reflects the building more or less as it would have appeared in the 1910s-30s - certainly pre-WWII.
I’m enjoying this slightly earlier era modeling. I'm actually working on a blacksmith shop of all things at the moment - just found a couple of vintage photos that made modeling the building seem very appealing to me. No surprise to anyone who's read my blog post on my early model railroad influences.
Who knows, maybe some of this earlier era stuff may well leak off the modeling desk and onto the layout…..
Posted by CVSNE at 10:09:00 AM 2 comments: 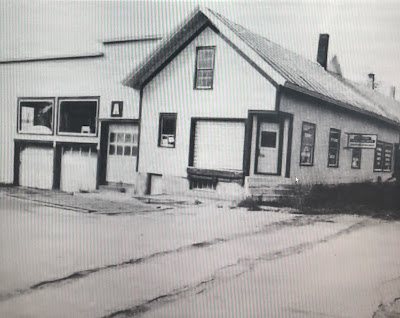 I need to get started on this since I've committed to doing a clinic on how I research and model prototype specific structures for the Mid Atlantic Railroad Prototype Modelers (MARPM) meet at the end of next month.
The series of blog posts for this project will not include all the photos/diagrams/etc... from the clinic - think of this as an overview of the project. For a more in-depth description consider attending the MARPM.

While I have some typical New England buildings left over from prior layouts that I will be using on the Richford Branch, I certainly plan to model some signature structures. The first of these is this "Agricultural Implement & Paint" dealer, which still stands in Enosburg Falls, Vermont.
I've known about this building, with its unusual front corner door, for a number of years. In fact, I first noticed it in an early issue of the CVRHS Ambassador when it appeared in an article on the Richford Branch.
Sanborn Maps label the structure as Agricultural Implement & Paint." What the name lacks in pizzazz it makes up for specificity. Reviewing the maps over the years show the building was originally L-shaped with peaked roofs. At some point between 1920 (the date of the latest Sanborn Map on the LOC website) and 1960 or so when the Ambassador photo was taken, the building received a flat roofed addition that converted the footprint to a rectangle from an "L."
Some places change radically from year to year or decade to decade, meaning the opportunity to a building from the 19th century standing relatively unchanged is pretty rare for some parts of the country. Luckily for me, rural Vermont is not one of those parts.
A quick wander around the streets of Enosburg Falls on Google Maps streetview show the building still stands, and is remarkably unchanged. I did screen captures showing all the sides of the building. I've included those below:


Full in the knowledge that I need to come up with a better name for this thing, I thought I had enough information to get started on the model.
I have two more potential sources of photos/information to check for this structure.
The first is the history of Enosburg Falls (if you've seen the video layout updates on my YouTube channel you've seen this book).
I also need to check the Central Vermont Railway in Steam, Volume 3, DVD which features a trip in a van up the Richford Branch to see if this store shows up at any point. It's surprising what shows up in that video - for instance, the only overall photo I've ever found of the Richford plywood plant happens to be in that DVD.
If anything turns up in either place I'll do a post highlighting what I've found. Otherwise, the next post in this thread will show the approach to site planning and mocking up the building. 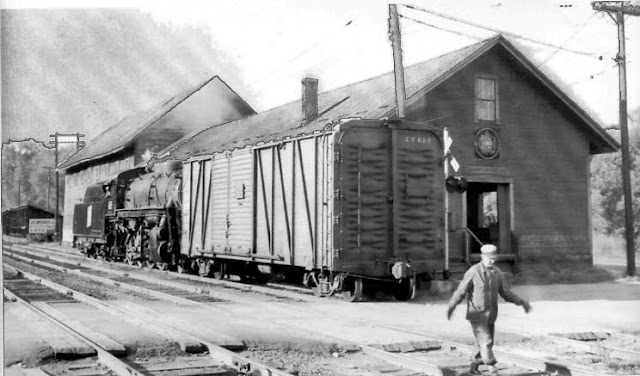 Considering their relatively small numbers, these cars seem to come up on the Steam Era Freight Car List with surprising regularity. They reared their heads again a week or so ago on that list. My response with a couple of tidbits about modeling these cars may help you with your models of these cars.

These cars were in service for a very long time – through the late 1960s, but they really didn’t change in appearance all that much over the decades.
For perhaps more detail than anyone wants on these cars, I’d refer you to the following:

Over the years I’ve built a dozen or so more of the Steam Shack/Funaro resin kits. A couple of things to note on the F&C kit include: 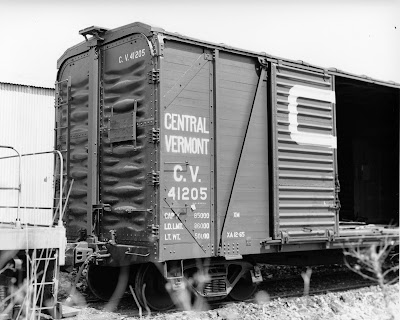 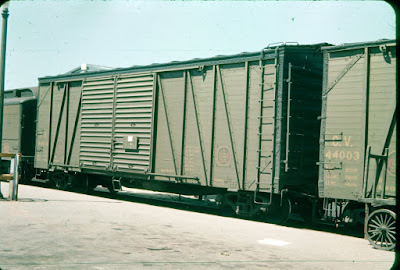 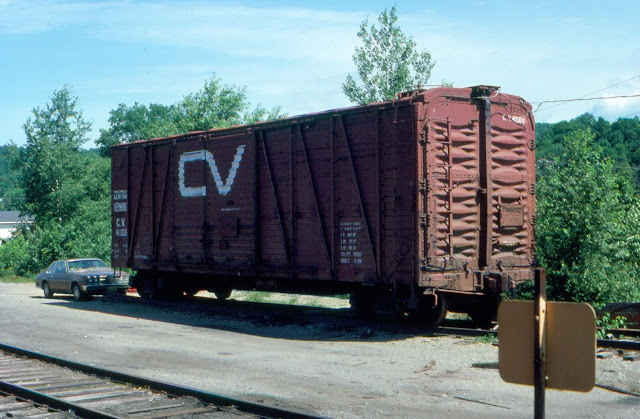 One issue that always comes up when discussing modeling these cars are the trucks.
The cars rode on cast steel ARA U-section trucks with spring planks and Barber lateral motion bolsters equipped with six springs per side frame--a style called "increased spring capacity trucks" by several manufacturers.
The MR article referenced above states the ECW 9074 70-ton "Bettendorf" trucks are closest. That’s a typo – it should be 9064 (I started editing the article, but had left the MR staff before it was published and a couple of minor, but annoying errors crept into the copy.) I got the reference to those trucks after extensive back and forth with Richard Hendrickson – and while those ECW trucks might look the closest, I’ve never bothered using them, or even trying to find a set since the operating qualities of ECW trucks are marginal at best.
I use Tahoe Model Works 50-ton Dalman 2-Level trucks. While certainly not an exact match they roll well, and at least have "extra" springs when viewed from the side.
As a side note, my first item published in a “real” model railroad magazine was a review of this kit (at the same marketed by Steam Shack but produced by Steve Funaro). Just for fun, here’s a photo of that model – warts and all - including its completely incorrect Kadee "Bettendorf" trucks! - on Paul Dolkos’ former B&M White Mountain Division: 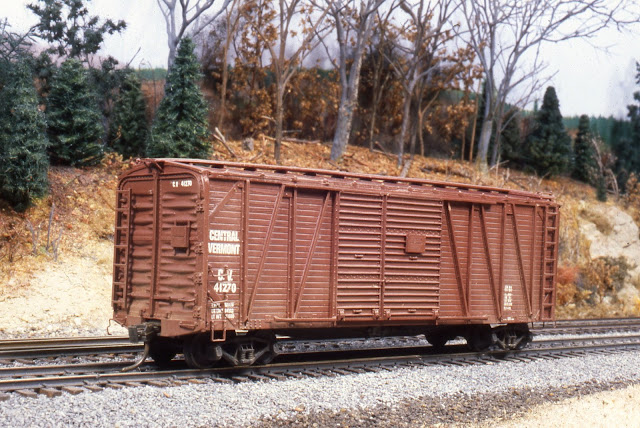 Layout Video Update for July 2019 can be found HERE

Unfortunately a lot more went on UNDER the layout than on top, entirely necessary of course but hardly photogenic! But here's a quick rundown:

1. All the track on the outer "loop," including all sidings and spurs (with the exception of the bridge and swing bridge) are complete. That's track down, wired, tested, and debugged.

2. Started laying out the track "full size" on the paper mill peninsula (I'm considering calling this area "Stafford Mills" since there's one too many "Sheldon <fill in blank>" on the layout. Someone mentioned that might confuse operators. I think it might since it confuses me.
You'll find Stafford Mills was the location of the paper mill complex on the original Southern New England (see MRP 2000). Besides, I came up with the name Stafford Mills for my first "real" model railroad back when I was in high school. I liked it then and I liked it now.

3. Continued with creating a realistic, and visually appealing, composition for the Enosburg Falls section. I sketched, and re-sketched some of the streets a half dozen times, but I think it's finally taking shape.

4. I didn't do a great of bench modeling this month, but I did finally finish this structure - Ben Thresher's Mill. You might remember it from the previous SNE layout in its unfinished state. I still don't quite know where (or if) it will find a home on this layout - at the very least I'm going to build a small diorama and install the mill pond and damn.

I'm on the docket to do a couple of clinics this fall. The first will be at the Mid-Atlantic Railroad Prototype Modelers Meet (MARPM) in September. The second will be at the Mid-East Region, NMRA Convention outside Philadelphia in October.