Sorry if it seems as if I've gone silent for the last week but between work at the office and getting ready for today's operating session I've not even looked at the computer at home most nights until now!
To summarize, thanks to an outstanding crew today's session was an unqualified success!
I rearranged the operating scheme to reflect more of the reality of the layout and less of the prototype timetable. What I was finding was the prototype timetable simply doesn't scale down to provide an engaging operating scheme on the model railroad. The following positions were staffed today:
1. Dispatcher
2. White River Yardmaster
3. White River Ass't Master
4. Southern Division operator/Crew
5. Three road crews (two of the road crews were two man crews) for a total of nine crew members.
The road crews didn't HAVE To be two man crews, but since both the north- and south-bound locals were operated in today's schedule, and since two people had never done much operating, it seemed helpful to put them under the tutelage of a more experienced crew member.
I think it also helped that several of the crew have been to a number of previous sessions, which meant I had fewer "basic" type questions to answer.
Couple of things I noted from the session:
1. Some of the locomotives are older engines with a lot of hours that are starting to have "issues."And frankly some have never worked all that well. In the several months since the last session I've made a concerted effort to repair or replace those bad actors. This session showed few, if any of the motive power issues that have plagued earlier sessions. Does it suck to have to admit a locomotive that you paid a decent amount of coin for is worthless? Yes it does. But a session with top-performers makes that pill much less painful to swallow.
2. To date I've played the role of "Southern Division Operator/Crew since most of it takes place in the utility room. I'd like to train some other people to do this job so I can do other things from time to time but it's hardly an appealing position in its current state. It was suggested the job which to date has been part station switcher, part fiddle yard "mole" could be recast to add specific WRJ hostler functions - I need to look into this.
3. I don't NEED nine operators (8+me) but no one spend an inordinate amount of time waiting around. Honestly, the layout can readily be operated with six. One thing I think I'm getting better at is crew management. As a project manager in my professional life I have no problem telling people what to do but model railroad "people management" has proven to be an interesting challenge. This time I arranged the train schedule and crewing assignments so that once one crew finished a run they would have a short break (10-15 minutes max) - before running another train. And I based the train schedule on that approach - not simply the prototype timetables. The result paid off in a great session.
4. The "paperwork" - timetable, Yardmaster instructions, and the like seem to have enough maturity that I don't feel the need to alter them before the next session. (For example, I've hosted 11 sessions and today we used Timetable No. 10…. You do the math!) I did get some questions on "Is this town north or south?" a few times - I think a linear map showing the towns with a "You are here" highlight on the town you're standing in front of may help. Easy enough to do. Thought of doing it at one point. For some reason I never did.
In any event, a good time was had by all (lunch was outstanding, thanks to Christine's efforts!) and I'm very pleased with how the layout performed.
Now I'd like to get some of the scenery finished.

Time to put away the tools, scenery supplies, etc.. and get ready for my next operating session which will take place on Saturday June 27.
Christine has the most important responsibility - making lunch! Provided that goes well most of my crew are willing to forgive a host of problems!
Seriously, I do want the layout to operate well, and since I've been doing a lot of work on the railroad and the structures and I have something to show off to those who haven't been here since the last session.
In the meantime, I have to get the track cleaned, make sure the locomotives and cars are all staged. So there is paperwork and layout prep involved.
There are two or three little projects I want to wrap up on the layout - mostly adding some more scenic texture and trees in a few spots to make them look a little more finished.
The last few sessions I've been doing "preps" as the crew came down the stairs. Going to avoid last minute scrambles this time.

Steve Daves actually had the foresight to shoot video of N&W 611 last weekend. Very, very brief runby as she passed through Gainesville, Va.
But hey, at least you get to hear the whistle.
Thanks to Steve for giving me permission to share it here.


As we were enjoying our morning coffee on the deck yesterday we heard the unmistakable "moan" of a steam whistle not far from the house. Ex-Norfolk & Western 4-8-4 no. 611 has been in Manassas since Thursday and ran a pair of excursions between Manassas and Front Royal, Va. yesterday and today. 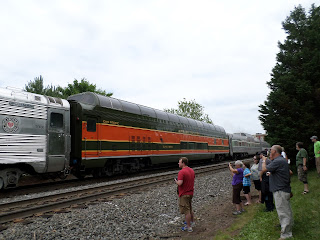 The whistle sounded closer than the station - it was. The engine was near the grade crossing in Manassas Park where the fire department had a pumper stationed to refill the tender before she made her first run to Front Royal. 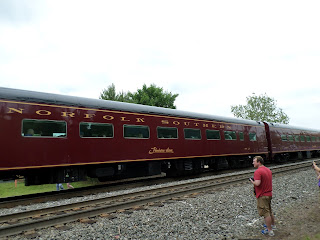 She was due back from that run around 1230, so I jumped in the car maneuvered around the hundreds of extra people in Old Town Manassas (normally on a Sunday morning it's a ghost town…) and worked my way over to the station.
I managed to get a couple of shots of the train pulling up to the station. The train actually stopped short of the platform and waited about 15 minutes for an Amtrak train. 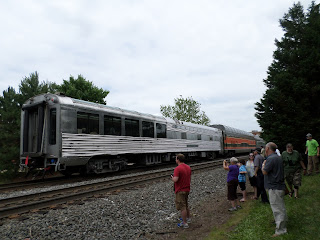 I walked along the tracks and got close enough to the cab to hear the radio speaker - the NS pilot in the the cab called the dispatcher and confirmed they were to head just north of the station and use the crossover track there to get on the platform track and back into the station.
"We'll be running up to Manassas Ave crossing to take on water" said the NS pilot in the cab.
"Roger, understood" the dispatcher came back. Then there was a brief (5-10 second pause).
"NS Train xxx …."You need to take on WHAT????"
Guess the dispatcher forgot for a moment this was a steam locomotive.

All was well, the engine looked and sounded great - search YouTube for one of hundreds of videos and photos that have been posted -
Well worth the trip through traffic to see her in action.

Stamping out the Shine...

I'm getting the layout ready for an operating session for our local operating group later this month. As I was staging a few trains I realized several of the cars had Accumate couplers. These two-piece plastic couplers don't uncouple easily enough and I usually replace them with Kadees.
The "ready-to-run" Atlas and Accurail cars also include unpainted - very shiny - silver wheels.
Since replacing the couplers meant removing the trucks to get to the coupler box cover, I went ahead and painted the wheels and the truck side frames at the same time.
Painting the trucks is the first step in weathering any car. I got extra motivated and did an initial coat of weathering on one or two cars - the yellow cars will be weathered at some point in the future.
In the end I spent some time last night and this morning and got the couplers replaced and wheel sets painted on about 15 cars.
Even without the "full" weathering treatment they look a lot better!

Wordless Wednesday #95 - The Story Behind the Story....

When I went to the Naperville RPM meet in October I took one of those "bargain" airlines that sell you a ticket for $49 DC-Chicago... and then charge you extra for everything from a cup of water to a suitcase... a "carry on" was included and since I was only staying one night I packed very minimally.


Of course at the show I bought some new kits and a few books...and I went up to the room to pack my bag and every time I tried I ended up with one thing not fitting - since the milk car kit was an old F&C kit I bought for $15 I almost pitched it. Then I remembered Pierre Oliver, proprietor of Elgin Car Shops was doing his clinic in less than an hour. So I went to the clinic and gave him the kit to bring home with him.
He delivered it to me on Friday at the Collinsville, CT meet. He did an excellent job on the model - so much so that I wanted to show it off. Since I was at the meet I put the car out on a table in the model display room. Got some nice compliments on it and I hope it drummed some business up for Pierre.

But the story doesn't end there - Pierre was also kind enough to bring me another winterization hatch to finish my ongoing RS-3 project. He put the part in the kit box.


When I was getting ready to pack up on Saturday the car was there but the box - with my winterization hatch - was no where to be found. I was beginning to suspect the milk car was somehow cursed, or at least didn't care to travel.


Pierre bailed me out with another box and some wrapping so I could get the car home in one piece.


Luckily the box turned up at some point (I suspect a local fellow accidentally piled it in with his stuff and realized it when he got home...) Dave Owens is sending the part to me so all is right with the world and order has been restored to the known universe. 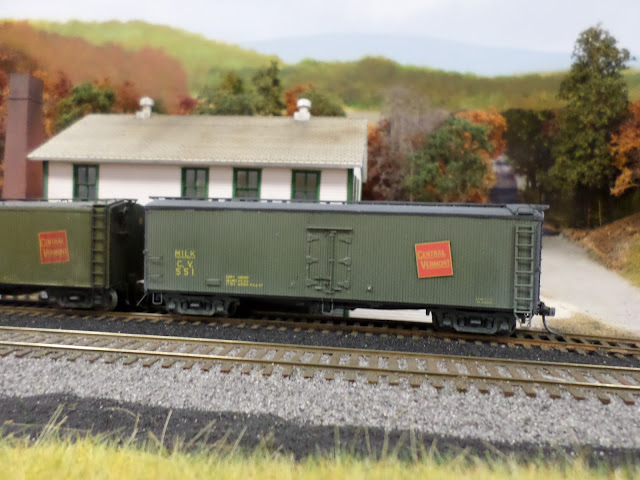