With the basic layout plan finally figured out, it’s time to resume the “Peninsula Campaign.” Like most peninsula campaigns throughout history, this one had bogged down.  I could keep planning, and planning but until I had some of the key structures complete I would never be able to move forward completing the scene. So, starting this weekend I turned my attention away from the layout proper and towards the modeling desk. I decided to start by building the BEST Trains Berry Machine Shop kit. This kit consists of three structures – a penstock, boiler house, and the machine shop itself.

These pictures are from the BEST trains web site, and show the kit and prototype: 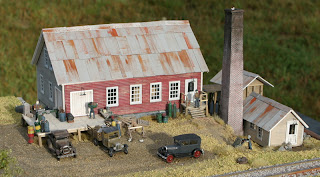 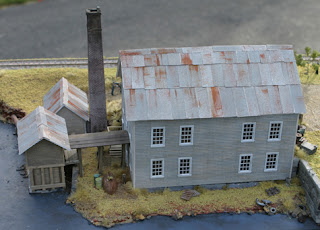 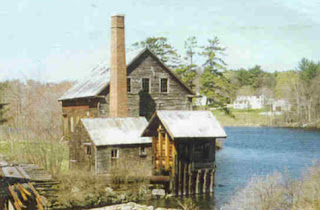 This is a mockup of the machine shop building in the approximate location on the layout: 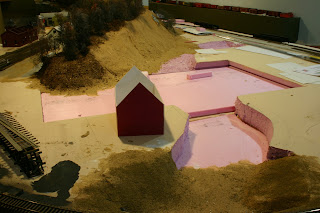 Here’s the obligatory photo of the kit parts spread out on the modeling desk: 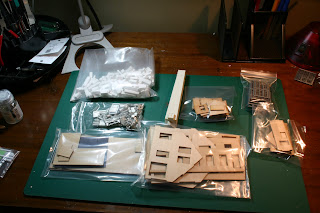 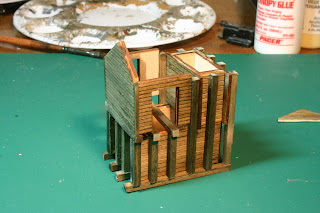 The good news? The parts of the kit are well made, fit, and seem complete. If this kit has a weak link it’s the instructions – frankly to say “They leave a lot to be desired” is kind. They aren't wrong, just incomplete. One example? There’s a mention in the instructions of “add the stairwell and platform” to the penstock – but not drawings, photos, or even an indication of which parts to use other than a reference to a piece of 1/16th” scribed sheet “3/4” x 1-1/14”. That’s all well and good, but there’s no piece of scribed stock that size! And, although the laser cut parts have locating tabs and the like, they are not made so there’s only one way to put together the building. In other words, it’s really easy to assemble a wall backwards . . . don’t ask me how I know.
Luckily, I have drawings of the prototype buildings from a different source (not included in the kit) that are proving invaluable at filling in the blanks left by the instructions.
Despite the frustration with the instructions, the kit is going together and I’m enjoying a chance to finally build a model again. It’s been too long.
I’ll post a follow up report once the boiler house and machine shop buildings are together. 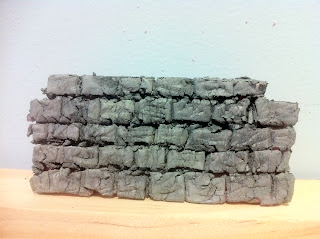 Although I highly recommend New England Brownstone plaster products, there are times when you need a “quick and dirty” stone retaining wall or abutment. In this case, I needed abutments and a short stretch of retaining wall for a street overpass.  Since these components will be obscured by other buildings when the scene is completed, they didn't need to be detailed or foreground models.


I was figuring this was going to be a long evening of trying to kit bash a Chooch abutment or casting my own out of plaster when Paul Dolkos mentioned he’s had some success carving them out of pink foam board.


The photo shows my first attempt (this is an experiment on some scrap foam) after about 10 minutes of effort.


Simply cut out the basic shape and then use a dull pencil or some similar instrument (I used a pencil and the blunt end of a fine paintbrush) to “carve” the stones into the Styrofoam surface. I found I could create the look of the face of the stones by pushing in on the foam with the pencil tip and dragging it. It’s important to avoid “breaking” the surface.  I went ahead and used an X Acto to carve some deeper crevices in an attempt to highlight the individual stones.


Some black and white paint, blended together to make a base gray, and some lighter gray and tan highlights, and finally a dry brushing of white, produced a pretty decent cut stone retaining wall. While I wouldn't consider this a "foreground" model, it's a quick and easy way to get the effect. And, considering how much Styrofoam I have laying around, the price can’t be beat!

A group of high school students in Hartford, Vt., have developed a really neat 3-d map of White River Junction using Google Maps and Sketch up to create very realistic renderings of the buildings. Also included are short histories of many of the key structures in the village.

You need Google Earth plug in to explore the 3-d map - but it's well worth spending a few minutes walking around town!

This screen shot shows the familiar White River Junction station in the center - the CV track is curving to the left from the bottom of the picture, the B&M line to Wells River curves to the right. On the extreme right you can see the B&M Northern Line to Boston.  Although the tracks aren't clearly indicated, you can see where the B&M diamonds were located. 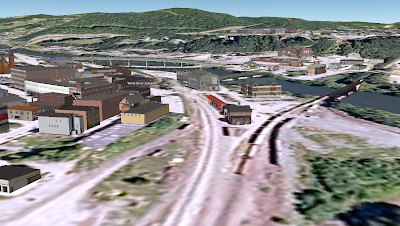 "Walking" up the river (yes, you can virtually wander around in the 3-D landscape) you can get a view of a number of key structures in White River Junction. One of the most familiar, forming a backdrop for the Central Vermont yard, is the billboard on the Ward Baking Co. 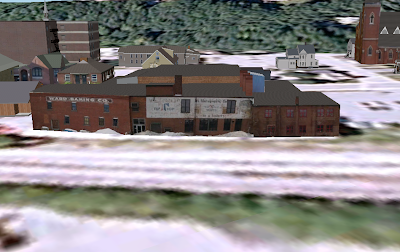 Over the last couple of weeks I've managed to find a fair amount of time to work on the layout. Although I did get a fair start at kitbashing the Cooley-Wright foundry for Waterbury, I haven't actually completed any projects in the last two weeks - and nothing is even remotely close to be being ready for photography.
Yesterday Dave Emery came by and we did some "3-D" planning and arranging of the mill stream scene. This scene, which is essentially the back half of the Waterbury peninsula, is intended to showcase several water-powered (or originally water-powered) New England mills. With Dave' help I was able to identify the key elements and get a good idea of how the scene will look. Some of the "mockups"we used were more than a bit unorthodox, including structure kit components, boxes, folded up pieces of paper, and even locomotive boxes! But even these unusual mockups served their purpose - letting us visual how the scene and each element would look. I'll try to get the new version of Illustrator loaded into the computer later and see if I can sketch up a version of the resulting plan.
Over the last couple of weeks I've studied the planned White River Junction scene. Without going into a lot of detail, while WRJ may "fit" in the space, it will never look "right" to me. I've been stressing over that scene for months - which includes full sized mockups of the key buildings. Anytime you get that stuck on a layout project it's a sure sign something just isn't right.
The solution?
The layout needs a freight yard and some sort of engine facility to execute the planned operating scheme - I also want to include a single large industry that takes a variety of freight cars.  Both of these items can be found in Palmer, Mass. So, the yard will be based on the CV yard in Palmer - a small yard that is ideally suited for a model railroad. It was even used as a base for several local freights during my era - the exact same purpose I need a yard to serve on my layout. The single large industry is covered by the Spencer Wickwire Plant.
I've started mocking up the scene this morning and have found it fits much, much better than WRJ did. With WRJ I was constantly fighting the space - that's not been the case with Palmer.
For a track plan, I didn't have to look any further than my the article I co-authored with Iain Rice in own Model Railroad Planning 2000.  The first Southern New England layout, featured in that issue, included a version of Palmer yard. The dimensions are almost the same!
So in a way I've come full circle!