Believe it or not, there are actually TWO Central Vermont Railway modelers in Manassas, Va., me, and my good friend John Paganoni. 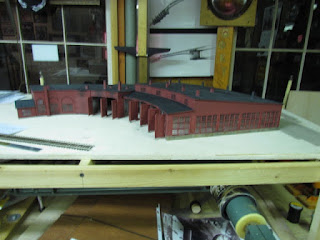 John is well known in CV modeling circles - although he hasn't built a huge number of models, the ones he has completed are universally excellent - and his latest, this roundhouse, is no exception.

The model is completely scratchbuilt, and accurately reflects the appearance of the structure in John's 1950s era.
Close study will reveal this is a building with history - the older arched stalls on the left side date to the pre-Civil War era (by John's era this section of the building had been converted to a shop area since the doors were too small for the power in use on the line at the time), the middle section - with the larger doors and longer stalls - built as six stalls but four of them burned down. And finally, the "new house" - the wooden section to the right with the larger windows and doors. 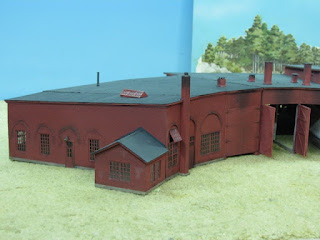 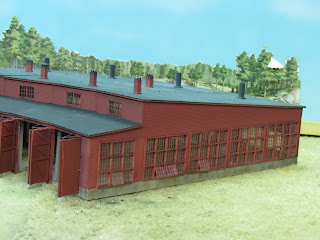 This was the last major component of the New London facilities John needed to complete - he's already built the coaling tower, water tank, and turntable.

Here's John's description of the project:

"Marty:
The New London roundhouse project is about complete except for some interior
detail in the newest section (4 stall section)that I will do before putting
the structure in place. The machine shop will be fully detailed inside, and
I have already completed the machines and floor as an insert when I put the
structure in place. Lighting is already installed.

There are a lot of things I would have liked to come out better, but I am
tiring of this project (it has taken far more time than I thought it would)
and want to get on with bench work.

Email ThisBlogThis!Share to TwitterShare to FacebookShare to Pinterest
Labels: Other modelers, Structures

After my friends Paul Dolkos and Mat Thompson came by late last month Paul mentioned that I should postpone scenery work and focus on getting the track and wiring done to the point where we can operate the railroad. "Then," Paul added, "you can get things tweaked and have the freedom to pick and choose whatever project you'd like." Certainly seems to make sense, and I remember the sense of accomplishment when I was able to declare the major benchwork construction done and get all the scraps of wood out of the basement. Could the same feeling of accomplishment accompany getting all the track in - at the time Paul visited there were stacks of flex track and turnouts all over the place.

I've decided to take his advice - perhaps the most "track intense" part of the railroad is White River Junction. I introduced the scene - at least how I'm using mockups to plan it - in the latest issue of Model Railroad Hobbyist ezine - there's even a video. Since that article was written I've made some decent progress getting the track in place in the freight yard and the WRJ locomotive terminal. I also ordered a couple of turnout kits from Proto:87 stores to see if the details on their plastic ties will blend better with the Micro-Engineering flex track.

Here's an overview of the freight yard, with the engine terminal in the background. 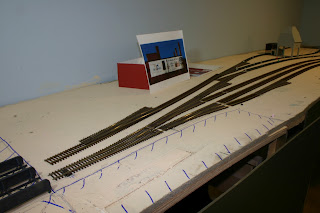 I needed to remove some of the Homasote and plywood for the Bridge Street overpass. Of course, before I could get out the saw I needed to know exactly where the yard ladder and mainline would be! 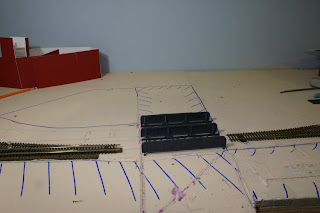 One of the signature spotting features of the White River Junction yard is the Tip Top bakery billboard. Tip Top was rail served in my era - even if it wasn't the billboard, shown here in about the same size that it will appear on the model, is an attention getter! 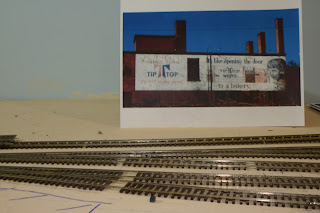