John McGuirk, age 82, husband of Marie McGuirk, passed away on Tuesday, June 15, 2021 at The Lakes at Litchfield in Pawley’s Island. 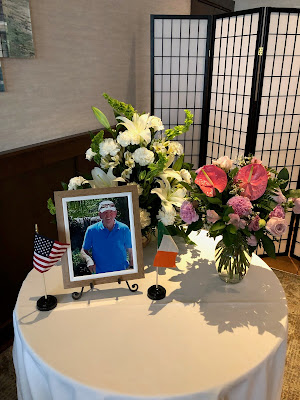 Born October 8, 1938 in Baldoyle, Ireland, John (“Sean” to his family and friends) was the son of the late Bernard and Ellen McGuirk. John was one of seven children. He and his wife, Marie emigrated from Ireland to the U.S. in 1964 where they settled in Connecticut until moving to South Carolina in 2017. John loved life, always had a smile on his face, and would join in singing any kind of music - especially Irish ballads, even if he was slightly off key. He started playing golf as a child in Ireland, and the game became a lifelong passion. Marie remained the true love of his life from the time they met. John enjoyed meeting new people and seeing new places, and he and Marie traveled extensively before moving to Murrells Inlet.

Survivors include John’s wife, Marie, of 57 years, their son, Martin McGuirk and his wife Christine of Virginia and three grandsons, Jeff, Sean, and Matthew, also of Virginia. He is also survived by three of his six sisters Annie, Carmel, and Veronica and leaves behind numerous nieces and nephews in the U.S., Ireland, the U.K., Australia, and New Zealand.

In lieu of flowers, expressions of sympathy can be made to Shriner’s Hospital Honor a Life and Give in Memory | Shriners Hospitals for Children® (lovetotherescue.org), and/or the National MS Society at Donate | National Multiple Sclerosis Society (nationalmssociety.org).

A couple of weeks ago I said goodbye for the last time on this earth to the wisest man I've ever met. About three years ago my father was diagnosed with Lewis Body dementia. At the time I hadn't heard of it. Over the past several years I've learned to loath this terrible disease.

Dad fought both the physical and mental effects of this disease until he simply couldn't fight it any more. Frankly the doctors were surprised he made it as long as he did. Any of us who knew him weren't shocked.

The last three or four months have been filled with hectic trips back and forth to South Carolina, lots of emotional conversations with my parents, my extended family and friends. What it hasn't been filled with is any hobby time. And that's okay.

But perhaps you'll indulge my thoughts just a little bit.

Now that I've had some time to reflect, I think my fondest memories of my father are the times we spent on the golf course when I was a kid. He would come home from work and we'd head to the course to try and play nine holes before it got dark. By the time we got to the last couple of holes it was typically pitch black. I don't remember much about the golf, but I do remember learning a lot from Dad on the golf course. He wasn't one to lecture or teach by telling - but he showed me through his actions how to be a good person.
One thing he did tell me was that you could learn everything you needed to know about someone's character by playing a round of golf with them.  I have found this to be true.

He also believed the world would be a far better place if people shared their own opinions less and listened to others more. I believe this to be true, but really need to work on it!

And while he wasn't a hobbyist in any sense of the word, he was a skilled and patient craftsman. Long before HGTV or "This Old House" my parents practically rebuilt our first house. He'd get a how-to book from Time Life (I think) - read how to do some project or another, buy the tools needed, and dive right in.

He was the first person to teach me "measure twice and cut once," to respect my tools and to never waste material.

One thing Dad was not was a model railroader. And while I don't think he ever completely understood the hobby, he certainly encouraged me. He bought my first train set, built my first train table, and would regularly take me to the hobby shop to get the latest issue of RMC or Model Railroader. 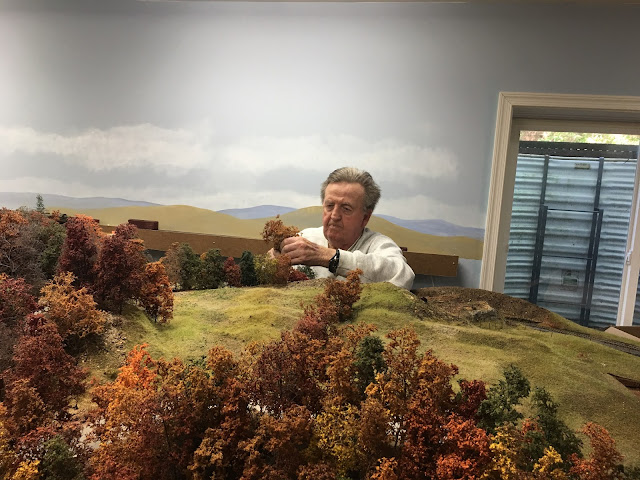 And, years later whenever my folks came to visit he'd spend time looking at the layout, and help out whenever he could. The last time he helped me out was the weekend we started disassembling the layout in our former house. The photo shows the reluctant model railroader carefully removing trees and packing them away in boxes.

On a visit to Myrtle Beach soon after my folks moved there I got to play a round of golf with my Dad. Dad, as usual, hammed it up for the camera!

At the time I looked forward to many more. On a lark I shot a very quick video with my phone. Turns out it would be the last time we'd play. I'd give anything to play just one more round with him again.

Marty sorry to hear of your loss.

Prayer's are with you and the family.

Sorry about your loss - my condolences. Scott

Very sorry for your loss, Marty.

Condolences for you and your family and will put you on our prayer list.

Marty I am sorry to hear about your dad. I know about having one more round of golf. Mine would be to go with him on a job call. He owned his own plumbing company. Prayer are with you and your family.
Tom Wilson