I managed to mess up my back during the weekend so I have not been able to work on the layout – I simply can’t stand for very long or hunch over anything. Luckily, today it feels better than it did yesterday and far better than on Saturday.
Since I can’t really work on finishing up the track work in Waterbury, and daytime television isn’t worth anything I decided to round up some photos of the Essex Junction trainshed. I have a lot of information on Essex Junction, but it’s scattered in numerous binders, books, and file folders. It was time to put it together in one “Essex Junction” reference binder. Included with this post are a few pictures of the shed.
When it was built (sometime just before the Civil War) the shed looked like three tunnel portals, side by side. 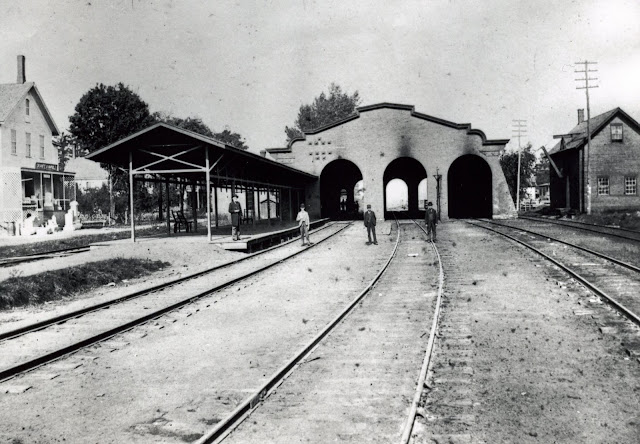 Over time as engines and cars got larger the shed portals were too small, so they were removed by the late 1880s and replaced by a wood gable ends that spanned all three tracks (when the B&L line was abandoned in the late 1930s, the third track – actually Track One – was removed leaving two tracks that ran through the shed. Here’s the way I’m going to model it (top photo is looking north, bottom photo is looking south): 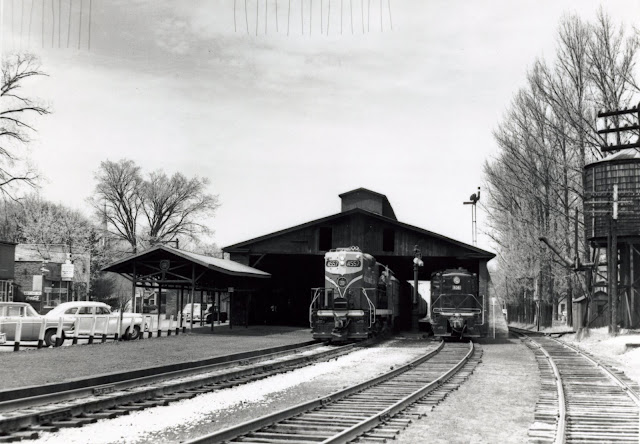 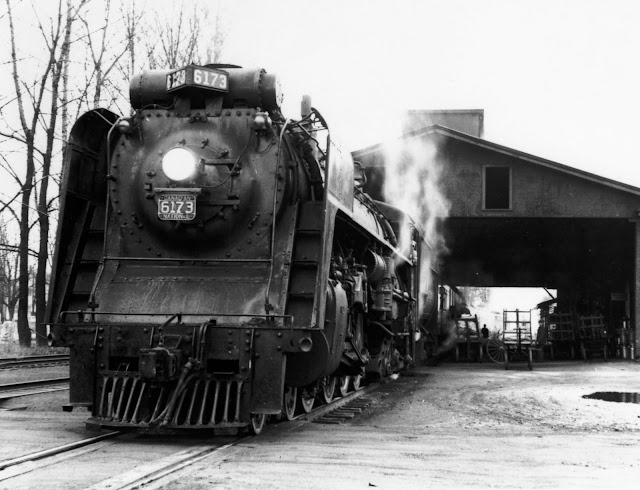 This is going to be one of those signature projects on the layout – it has to be done “right” since it’s such a critical element of the scene.
You can see lots of details on Essex Junction in my article that appeared in Model Railroad Planning 1998. I also wrote another article on Essex Junction, this one including plans of the station and trainshed drawn by my good friend Laz Scangus, in the February 1993 Mainline Modeler.
I’ve built an N scale model of the trainshed before (it appears in the MRP 1998 article). But for this HO scale model I want to take it a step further and include the ceiling truss work as well as some interior lighting. Mostly, I want to be able to recreate some of the photos shown here, taken inside the shed. 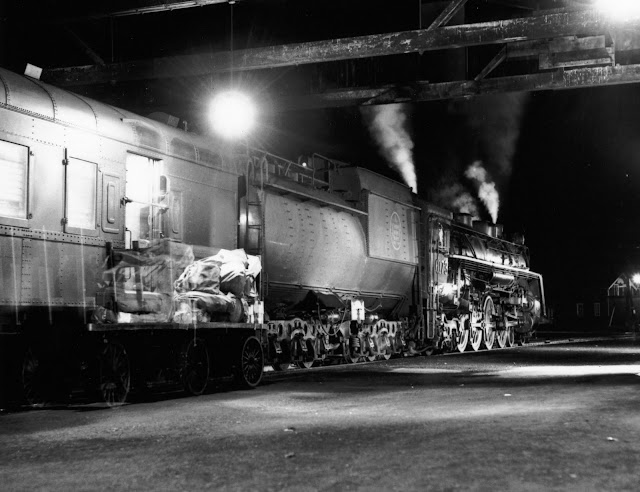 There is also the practical aspect of coupling and uncoupling cars inside the trainshed. Do I make the entire roof removable (for operating sessions we’d take the roof off) or add an opening in the roof – similar to what Jack Burgess did with his model of the Yosemite Valley’s El Portal station?
Perhaps what I need to do is leave one side wall removable, perhaps held in place with magnets. That way, if I want to shoot a picture from inside the shed I can take that sidewall off and get the camera lens “inside” the building.
I plan to build the shed almost exclusively from styrene. Once I figure out how the roof trusses were constructed I’ll draw them up and we’ll see if they can be cut on Bernie Kempinski’s laser.

Lay of the Lost Traveler

Essex Junction is the location where a short branch to Burlington connects to the Central Vermont’s mainline. Until the late 1930s, that branch didn’t end at the CV main, it actually crossed itt as the Burlington & Lamoille branch of the CV (named after the original B&L RR).
As one of the key scenes on my layout I've done a lot of research on Essex Junction over the years. One of the most interesting things to turn up in my research is the following poem. (I'm not particularly into poetry . . . oh heck, I can't stand it and never read it after I finished school and didn't have to . . .) But the following goes to show just how classy this blog is - not just poetry but 19th century poetry no less.
A number of railroad towns have been immortalized in poetry and song over the years, and Essex Junction is no exception. The poem, “Lay of the Lost Traveler” is said to have been inspired when the author, the Honorable Edward J. Phelps, left Burlington on the so-called “shuttle train” for Boston via Essex Junction.  He stepped off this train in Essex and waited for the arrival of the mainline train. The usual shifting of trains took place and Mr. Phelps, without inquiring, got on board the train he anticipated would take him to Boston. In fact, he had reboarded the “shuttle” train which promptly deposited Mr. Phelps back in Burlington, his starting point. There, on his arrival, he penned the following:

The Lay of the Lost Traveler

With saddened eye and battered hat
And eye that told of black despair,
On wooden bench the traveler sat,
Cursing the fate that brought him there.
“Nine hours,” he cried, “we’ve lingered here
With thought intent on distant homes,
Waiting for that delusive train
That, always coming, never comes,
Till weary, worn
Distressed, forlorn
And paralyzed in every function!
I hope in hell
His soul my dwell
Who first invented Essex Junction!

“Here Boston waits for Ogdensburg
And Ogdensburg for Montreal,
And late New York tarrieth
And Saratoga hindereth all!
From far Atlantic’ wave-swept bays
To Mississippi’s turbid tide
All accidents, mishaps, delays,
Are gathered here and multiplied!
Oh, fellow man avoid this spot
As you would plague or Peter Funk shun!
And I hope in hell
His soul may dwell
Who first invented Essex Junction!

“And long and late conductors tell
Of trains delayed or late or slow,
Till the e’en the very engine’s bell
Takes up the cry, 'No go! No go!'
Oh! Let me from this hole depart,
By any route so’t be a lone one,”
He cried, with madness in his heart,
And jumped aboard a train – the wrong one.
And as he vanished in the smoke
He shouted with redoubled unction,
“I hope in hell
His soul may dwell
Who first invented Essex Junction!”
Posted by CVSNE at 10:57:00 AM 3 comments: