An addition to the roster 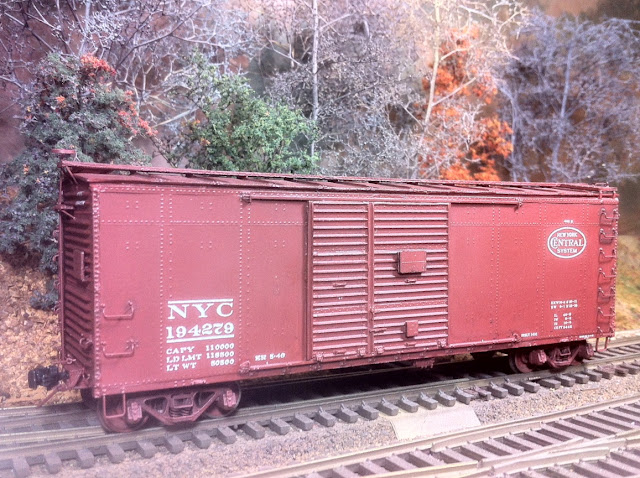 I've been so consumed with benchwork, track, and wiring over the last couple of years that I haven't added any new cars to the layout - although the pile of "to be built" kits certainly hasn't shrunk - in fact, it's grown.
So I was doubly thrilled to find a box from Elgin Car Shops arrived in today's mail - although I have to admit I was expecting it. A couple of weeks ago Elgin proprietor Pierre Oliver sent me a email asking for my home address, since he had something he wanted to send me. Imagine my surprise when I opened the box to find a Sunshine Models kit for a New York Central 1-1/2 door boxcar. That was great - but the best part was the fact that car was finished - on a railroad with precious few "Finished" cars anything "Done" is worthy of a blog post - and a sincere thank you.
Actually, this past week I've contracted with Pierre to build a couple of other cars. Having seen his work in person I highly recommend.

For details on Elgin Car Shops check out his website.

And  as requested Pierre, now I can say "Pierre Oliver built that car for me . . ." 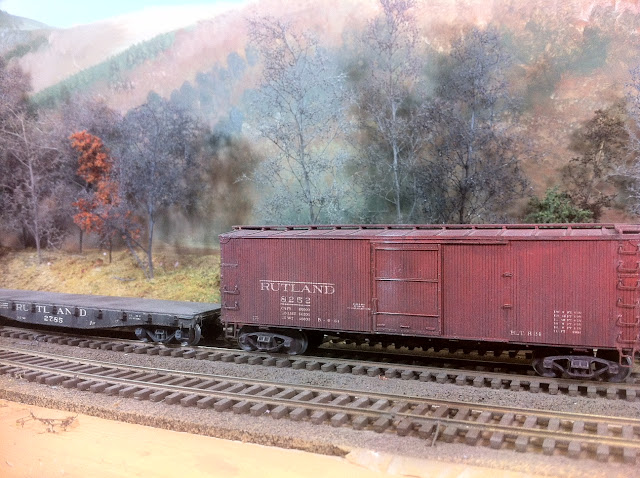 Paul Dolkos spent almost two decades building and detailing his beautiful Boston & Maine White Mountain Division. In addition to the layout itself, he created a roster of cars appropriate for his northern New England railroad. But, when he switched from modeling the B&M to the Baltimore Harbor District some of the New England cars seemed a little hard to justify.  . . . he also needed some Micro-Engineering track components to finish his latest addition to the new layout. The dealers were out of M-E turnouts, but I wasn't. And, while Paul found it hard to justify more than ONE Rutland car on his new layout, I can justify a couple on my layout. So, we made a swap. On Sunday I went over to Paul's to inspect progress on his railroad, and pick up the cars. I ended up with four of Paul's former freight cars - they are already performing yeoman service on the Winooski Sub. 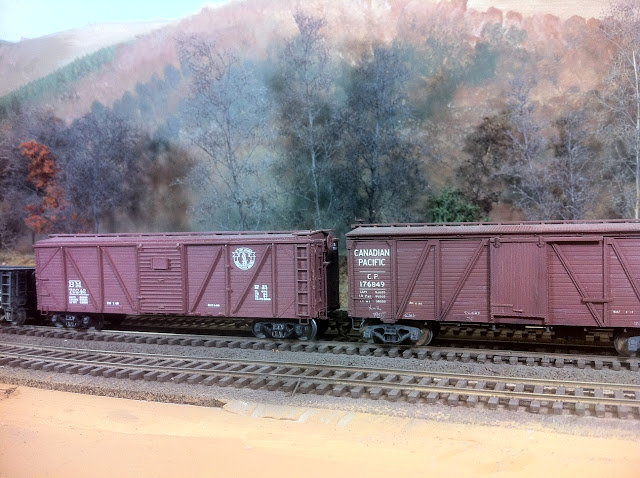 Paul didn't build all these cars - back in the early days of Paul's layout a mutual friend, Tom Underwood, built a number of cars for Paul. They are easy to identify by their "builders plates" that Tom added to the underside of the cars. This is the one from the Rutland flat car. In this case, this Rutland flat (detailed Athearn) was the 44th car Tom built, and he completed it in September 1993.

Note Tom also included information on the lettering (in this case, CDS dry transfers). I think the builder's plates are kind of a neat idea, and I may incorporate them on cars I build in the future. 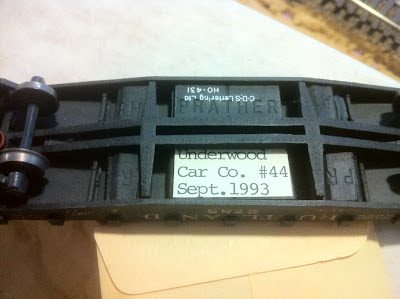 I ran across a tremendous resource at the University of Vermont web site. A collection of historic photo graphs of Vermont, many of which show scenes familiar to railroad modelers of the state. I found two of them of particular interest:

The first was this view of Essex Junction that shows the industries located in the around the wye - this shot dates from 1930 (the dates on some of the captions have been questioned, but the presence of the Burlington & Lamoille RR trackage in the middle of the wye makes me believe the 1939 date.

Another neat find was this photo showing a close up of the Demeritt Company in Waterbury. 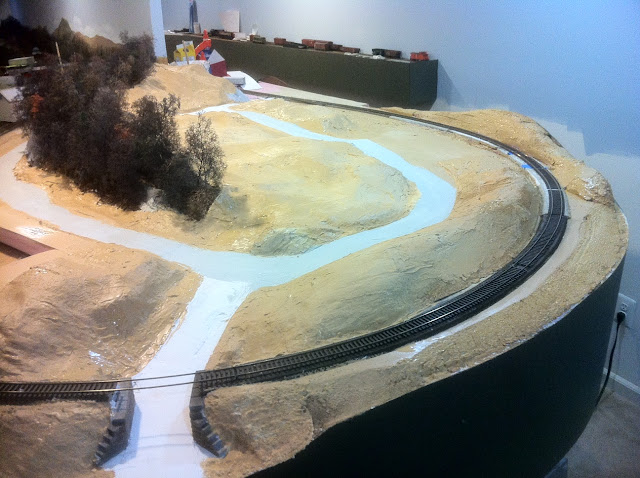 Although I've been working pretty steadily at track laying I just couldn't take the pink foam and white Sculptamold monstrosity at the entrance to the layout area.

My original plan for this section of the layout was a large mill scene - a river feeding several water-powered mill complexes. I even hogged the riverbed out of the pink foam layout surface - which believe me wasn't difficult but was hardly what I'd call fun.

Then it dawned on me - I have a big layout to build, with a lot of true signature structures - I didn't want to get bogged down building a bunch of mill buildings when I was trying to get the layout operational. Also, I was having trouble blending the freelanced mill river scene with the prototype based Waterbury scene on the other of the peninsula. I wanted to include the Demeritt Cannery in Watebury - but in order to place a hill as a view block between Waterbury proper and the river I didn't have enough room for the Cannery buildings.

The mill river obviously wasn't working for a bunch of reasons. So I stuffed a bunch of plastic bags with newspaper and used them to fill the riverbed. Then I applied a layer of plaster cloth - entombing the riverbed inside my new terrain.

In place of the river side mill complex will be a much simpler scene of pastureland - perhaps with a farm building or two up on the hill. A single industry - likely a creamery, will also be featured. The original culvert has been replaced with a road underpass. All that's there is the basic landforms and the rough outline of the roads, but I already like the scene more than the planned mill complex. The fact that it's an easy way out has been overshadowed by the fact that I think it looks more like rural Vermont than the developing scene it replaced. I guess I agree with Mike Confalone and George Dutka - as George wrote in his recent blog post, "From my point of view a barn built with little else around makes a great layout scene."

You can find the previous plan for this scene in an earlier blog post. The picture above shows the scene ready for the initial coat of scenic texture.