White River Junction from the air, 1953

A few months ago I found a neat UVM web site that featured vintage images of Vermont - including some aerial views of Essex Junction and even a close up a industry at Waterbury. While these images were extremely helpful, the White River Junction selection was pretty slim pickings. In fact all that came up in a search of "White River Junction" was a bunch of photos showing the interstate highway being built through the Green Mountains in the late 1950s. While somewhat interesting, it hardly was useful for my layout research.
That was a few months ago, and the internet is always changing. I've had some time during my lunch to wander around the internet over the last couple of days. Just for fun I went to the UVM site and entered "White River Junction" in the search window, fully expecting to find those same photos of interstate highway construction. Wow, those folks at UVM have been busy. There are dozens of photos of White River Junction - including this one dating from 1953 that at long last shows exactly how the turnouts between the station and the CV yard were arranged. If you go to the link you'll be able to use the "Zoomify" function to get some real close up views. 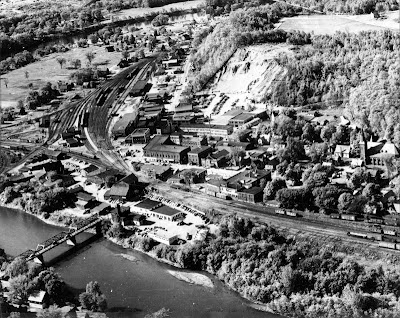 I get a lot of ribbing from my fellow modelers for my relative lack of written track plans. I do draw plans, I just don't often show them since I'm a terrible artist and the plans I draw wouldn't make much sense to anyone but me.
So here is a special treat - the sketch plan I drew (the last of several) before starting the ongoing rework on the peninsula.
Key elements include
(1) The Waterbury station scene (which includes the Waterbury station, a feed mill, the CV freighthouse and a coal dealer)
(2) a mill stream scene - this will be visually isolated from Waterbury proper by a low hill and trees. The mill stream will disappear behind the trees and dead end in the woods. Along the mill stream will be one, perhaps two, old non-rail served mills. These are strictly for atmosphere - not traffic generation.
Working our way around the peninsula we encounter a simple grade crossing that features a small country store - and not much else.
Finally, we end up at the river crossing scene with the large truss bridge that will end up "buried" in the tree-covered hillsides.
Still to come is a way to transition from the hilly bridge river crossing scene to the relatively flat Essex Junction scene. 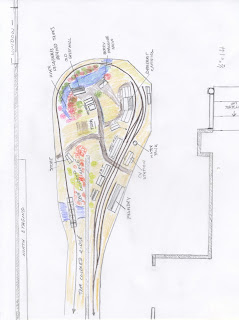