I've spent some time this morning gathering the information I have on the Atlas Plywood plant that once served as a backdrop to the CV's Richford yard. It didn't take long to gather the information since I don't really have all that much on it.

I do have the Sanborn Map that shows the footprint of the building, and a few photos. I've blogged about the plant previously - mostly in the post you can find HERE. That post covers the prototype - my goal this morning was to think through how to convert the information I have into a (compressed) model of the facility.

The brochure and Sanborn Map both date to the 1920s and early 30s. The only images I've found of the building after the war (it burned down in October 1954) were a partial view captured by Phil Hastings, and a quick snippet of the building on a DVD that was remastered from 8mm movie film shot from a moving caboose!

It seemed pretty obvious that I wasn't going to find any more detailed images than I already had. Besides, a quick scaling of the map image of the facility (called Richford Mfg. on the 1920 Sanborn) revealed it was about 550 feet from stem to stern. 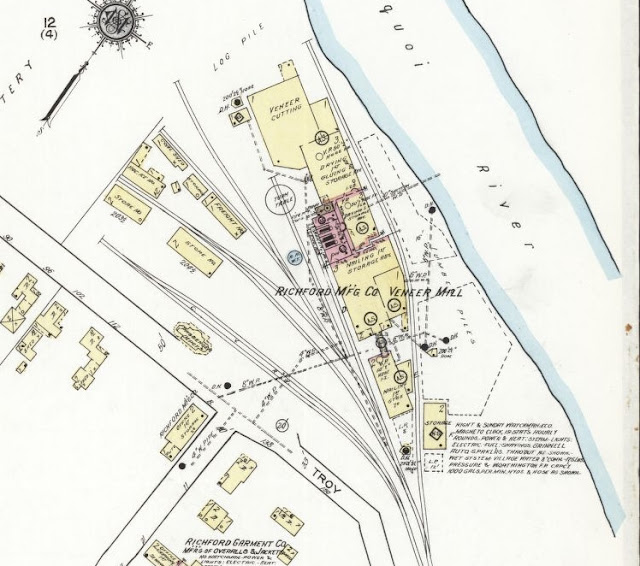 I'd left a large area for the model of the plywood plant - but building it full scale would completely dominant the view of the layout from anywhere in the room.

A compressed version of the plant seemed a better approach.

In the end I settled on a footprint about 36" long by 8" long at the widest point for the buildings themselves. That doesn't include some areas available for lumber stacks and the like.

I drew up a footprint that seemed to capture the key elements of the building. Some of the items I wanted to include were:

1.  The two story section between the tracks in the map image

2. The walkway between it and the larger building.

3. The portion of the three story section with the three smokestacks.

4. The large two story area at the top of the image in the Sanborn Map.

Rather than try to draw a scale plan of the building I blocked these key elements.

The first draft of how this could look is shown below. I started by drawing the overhead "footprint" view. Then I carried the lines where the building went from two to three stories and the like and blocked into the basic shapes. It looks like this will fit well and produce a convincing impression of the complex.

Before committing this to styrene I need to mockup the building in three dimensions.

This is the third post reviewing individual classes of Central Vermont freight cars; the two previous ones featured the 40,000-series Howe truss cars, and the 42,000, 43,000 and 44,000-series boxcars.

This time, our subject is perhaps the least documented of Central Vermont's roster, the four “drop bottom” gondolas. I know they existed since they appear on the CV Freight Car Classification sheets, although they apparently were never used in revenue service as they didn't appear in the ORER.

They tend to stay hidden in plain sight until you know what you're looking for - then they really jump out at you! Since they were assigned to cinder service they tend to appear in locomotive servicing areas such as New London, White River Junction, and St. Albans. I first noticed the end of one in a photo of New London.

According to a CV Freight Car Classification Sheet, these cars were built by Pressed Steel in 1923. They were 42'-11" long, with a width of 10'-3-1/2" and a height of 9'-1". The car classification sheet makes it seem as if all four were identical, although the capacity ranged between 44,900 and 47,200.  Although they were built in 1923, I suspect the CV got them later than that – possibly acquiring them from another railroad.

Adding to the confusion about these cars, the ones in the Classification Sheets show they were numbered 4463-4469 (obviously not consecutively!). I was thrilled to find the relatively clear side view of these cars. But note the numbers on the cars shown here. Of course, these photos date from 1951 and 1953, so perhaps the cars were renumbered at some point. But if so, why?

Although I don’t know much about the early history of the cars the few photos that have come to light show enough details to allow a reasonably accurate model (see the photos in this post). They were equipped with drop bottom doors, as evidence by the actuating rod for the door along the bottom of the sides.  The cars had flat steel plate ends with one or two ribs.

I haven’t seen any photos showing these cars in the pre-World War II Roman lettering (of course, if they arrived on the railroad later they may never have been painted in the Roman lettering). Sometime during the war years they would have been repainted in the then-standard “stacked” Gothic lettering with the Central Vermont roadname spelled out. During the late steam era the cars were painted standard Mineral Red (CN Red #11 from Scalecoat or Modelflex is a good match for this color). As they were used in cinder service, these cars tended to weather heavily.

My current layout doesn't have an engine servicing terminal, so I don't really need one of these cars but I'd still like to build one simply for the conversation value. I plan to use a Details Associates drop-bottom gondola kit as a starting point, although the Red Caboose (now Intermountain) GS gon may offer a better starting point. I actually have one of each in kit form in the stash! Detail Associates even offers an end (6222) that looks very close to those on the prototype. I will do a detailed post on the model when its complete.

This post is hardly a definitive history on these cars. I'm posting what I have now in the hope of unearthing some more details on these cars. If any readers have any info on these cars please share in the comment section!

Here's a link to the video:

New Life for an Iron Horse

I mentioned one of my goals for this weekend was to get CV no. 472 back into service.

This is an extensively detailed Bachmann Spectrum 2-8-0. It's actually a very, very early example of the model since it was the Model Railroader review sample. After Andy Sperandeo finished reviewing it he gave it to me

Iain Rice happened to be visiting Wisconsin at the time and I showed him the model and the drawings of the CV locomotive. We looked it over and noted the wheelbase and overall dimensions were pretty close to a CV N-5-a class engine. Iain mentioned it shouldn't be too difficult to get pretty close to a CV 2-8-0 starting with the Bachmann model. Not one to look a gift horse in the mouth, I sent him back to England with the locomotive and a shoebox full of Cal-Scale, Kemptron and Bowser detail parts.

I think the project was a little more involved than Iain bargained for - the photos here of the unpainted model show just how many details he added, moved, and removed, but it is remarkable how close it looks like a CV 2-8-0. 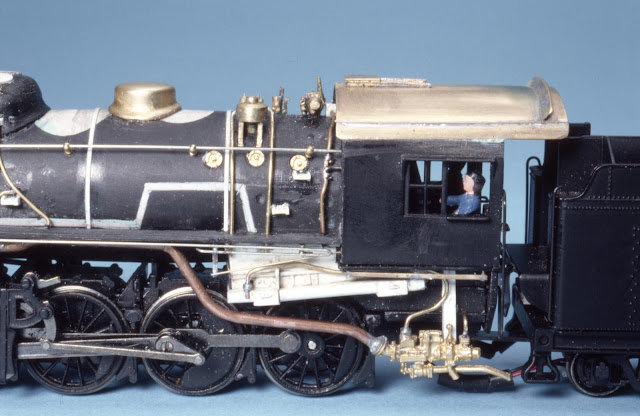 During the several months Iain was working on the engine another exciting new product arrived - a Soundtraxx DCC steam sound decoder. After the locomotive arrived back in the U. S., I installed the Soundtraxx decoder before painting, decaling and weathering the locomotive.

Number 472 was in regular service on both the first and second versions of my Southern New England. In 2015 I was getting ready for an op session when I noticed 472 was just not sounding or working right. I even mentioned it in this blog post.

She was "stored, awaiting disposition" for the next few years while other projects took priority.

A few weeks ago I dug the engine out the box and put it on the track. Not surprising the poor performance hadn't gone away with age. But I decided to swap out the old decoder and speaker. The nine-pin connectors made the actual decoder swap a simple matter. Swapping out the speaker was a little trickier, mostly because of the custom made baffle that I ended up having to remove to fit the new speaker in place.

I also took the time to dust the locomotive and tender off, and to clean the wheels and the copper pickup tabs on the engine and tender.

I'm pleased to report that 472 is back in service, looking and sounding better than ever!

I have a few items on my model railroad To Do list for this weekend. 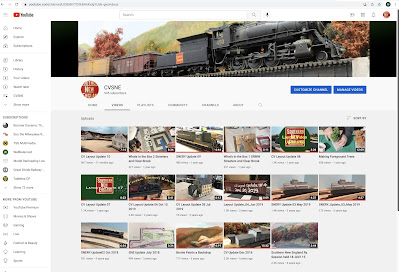 1. The first is to finally complete and upload a video update. It's been about 10 months or so since I posted an update to my You Tube channel. Of course, no one's knocking down my door asking for a video update - but I do have a (relatively) new computer and phone so I want to see if the video editing experience is any easier with this new hardware. 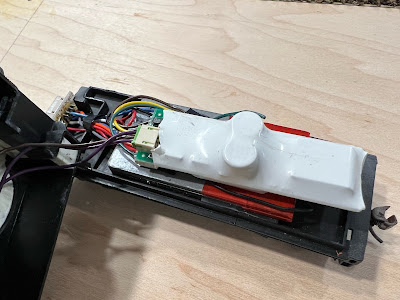 2. Replace the decoder in no. 472. This particular model is a Bachmann Spectrum 2-8-0. The Soundtraxx decoder I installed more than two decades ago started showing its age - and I ended up taking the engine out of service before one of the last op sessions on my previous layout. Time to see if swapping the decoder solves its problems.

3. Get the base scenery in place to the right of the Williams Creek trestle. I'v actually got the basic pieces of foam board cut for this area, it's merely a matter of devoting a couple of hours to gluing the pieces in place and carving the basic landforms.

Tune back in on Monday morning to see how well I did!