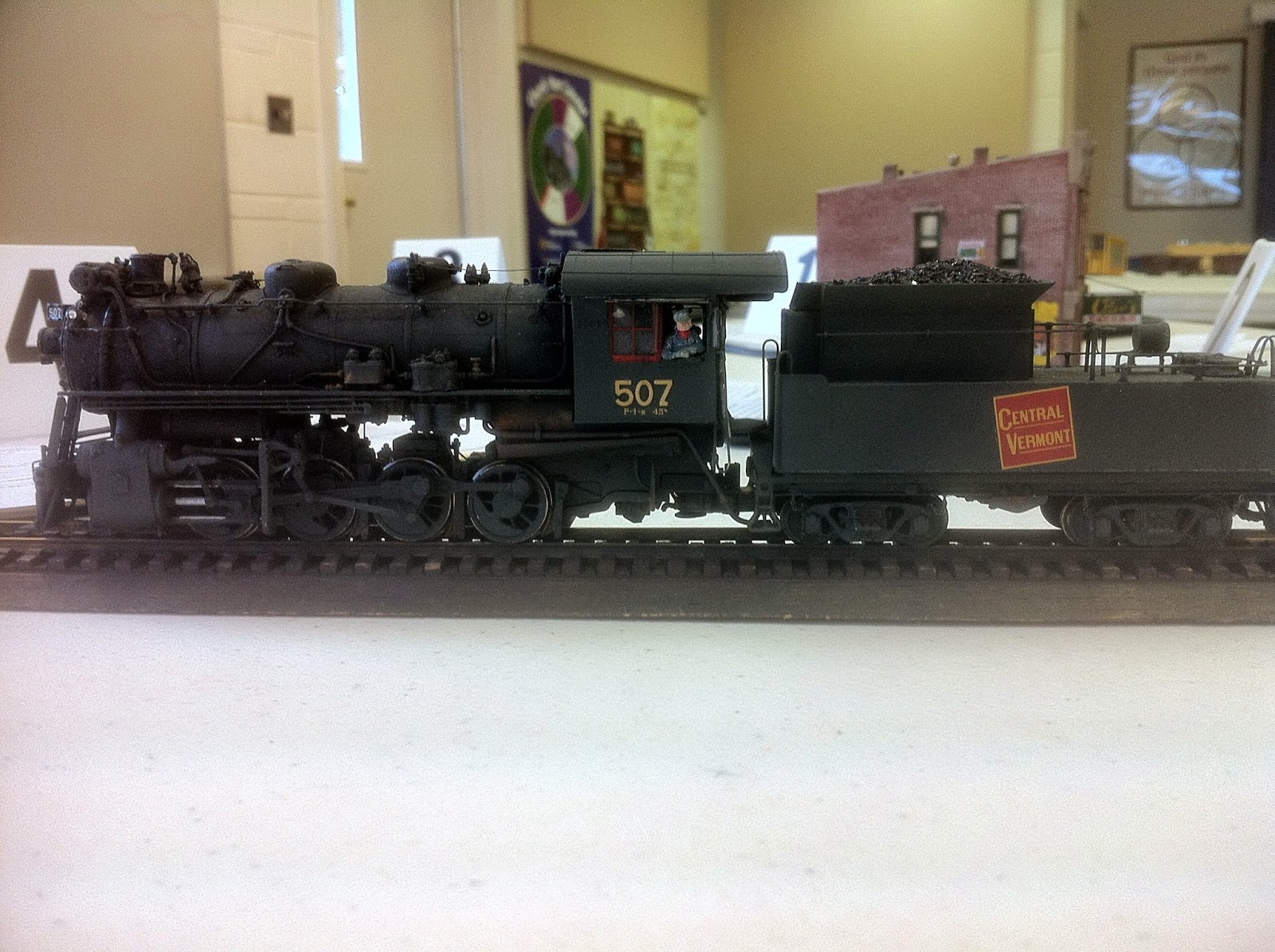 Yesterday I had the pleasure of attending our annual Mini-Con here in the Potomac Division of the NMRA. I was one of the judges in the contest room, so I didn't get to see any of the clinics. What I did get was a very close-up look at some excellent models, including this one by my good friend John Paganoni.
Officially, this is a "kit bashed" model - since the drive train and side rods are from a Life-Like-Proto-2000 USRA 0-8-0. I think a small section in the center of the boiler is also original to the Life-Like model. John also used some of the etched parts John Williams sold a few years ago for the tender shell and cab.
Everything - I mean everything - else on this model was extensively redetailed/reworked, and altered to match a Central Vermont P-1-a class 0-8-0 - specifically #507 as she looked in East New London, Conn., in 1951.
In the NMRA contest scoring matrix a "perfect" score is 125 points - this particular model ended up with 112 points. 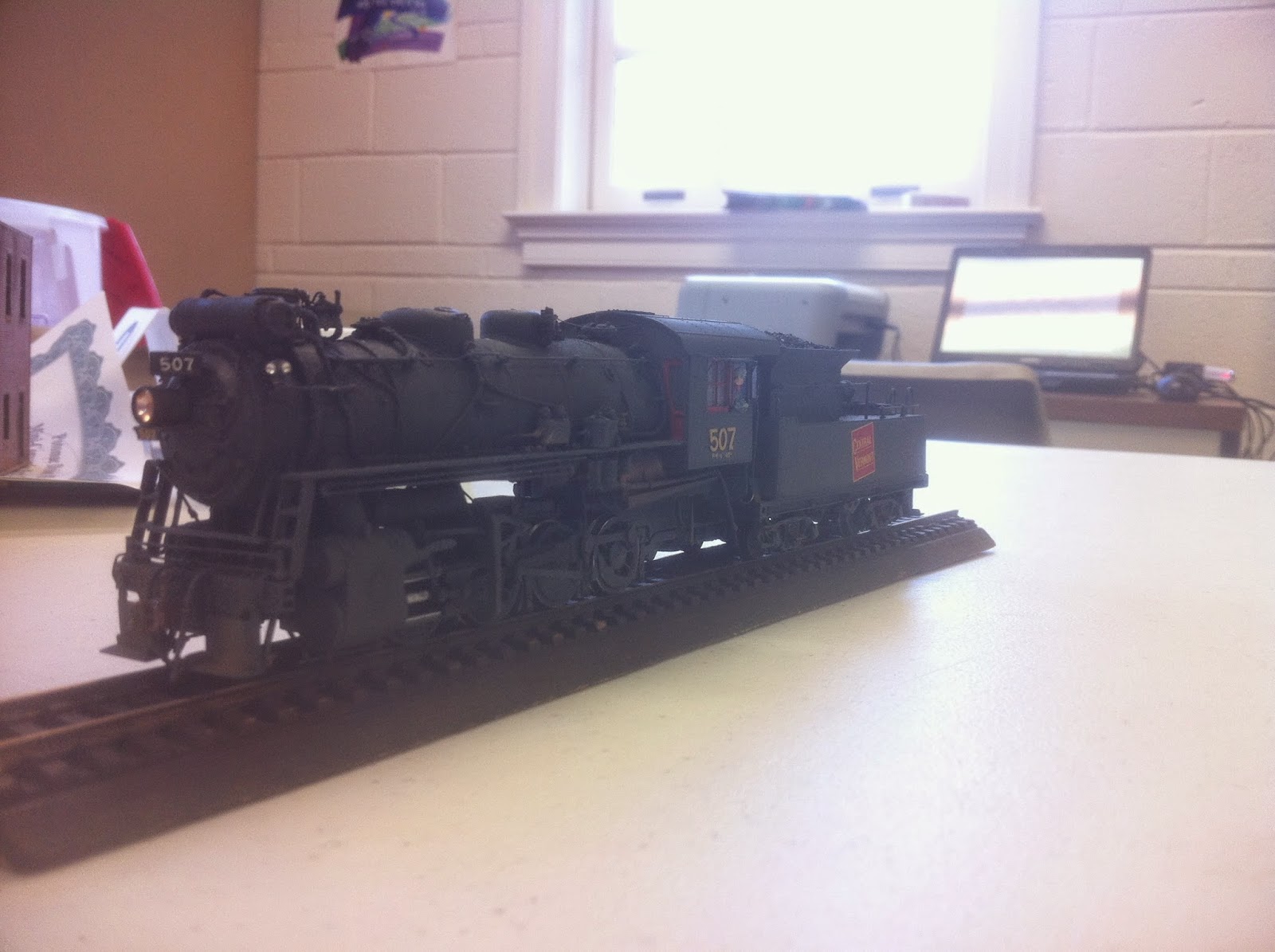 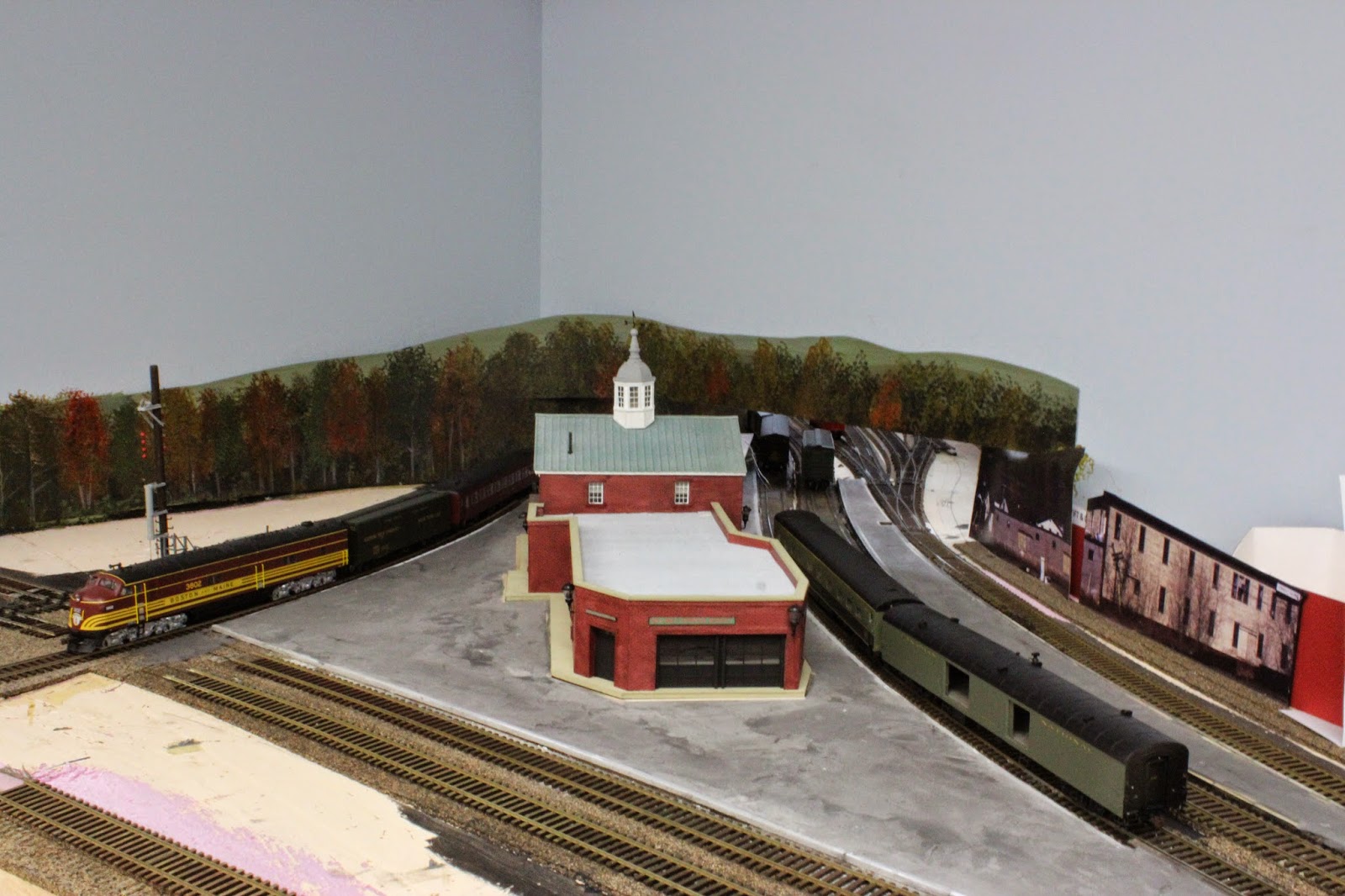 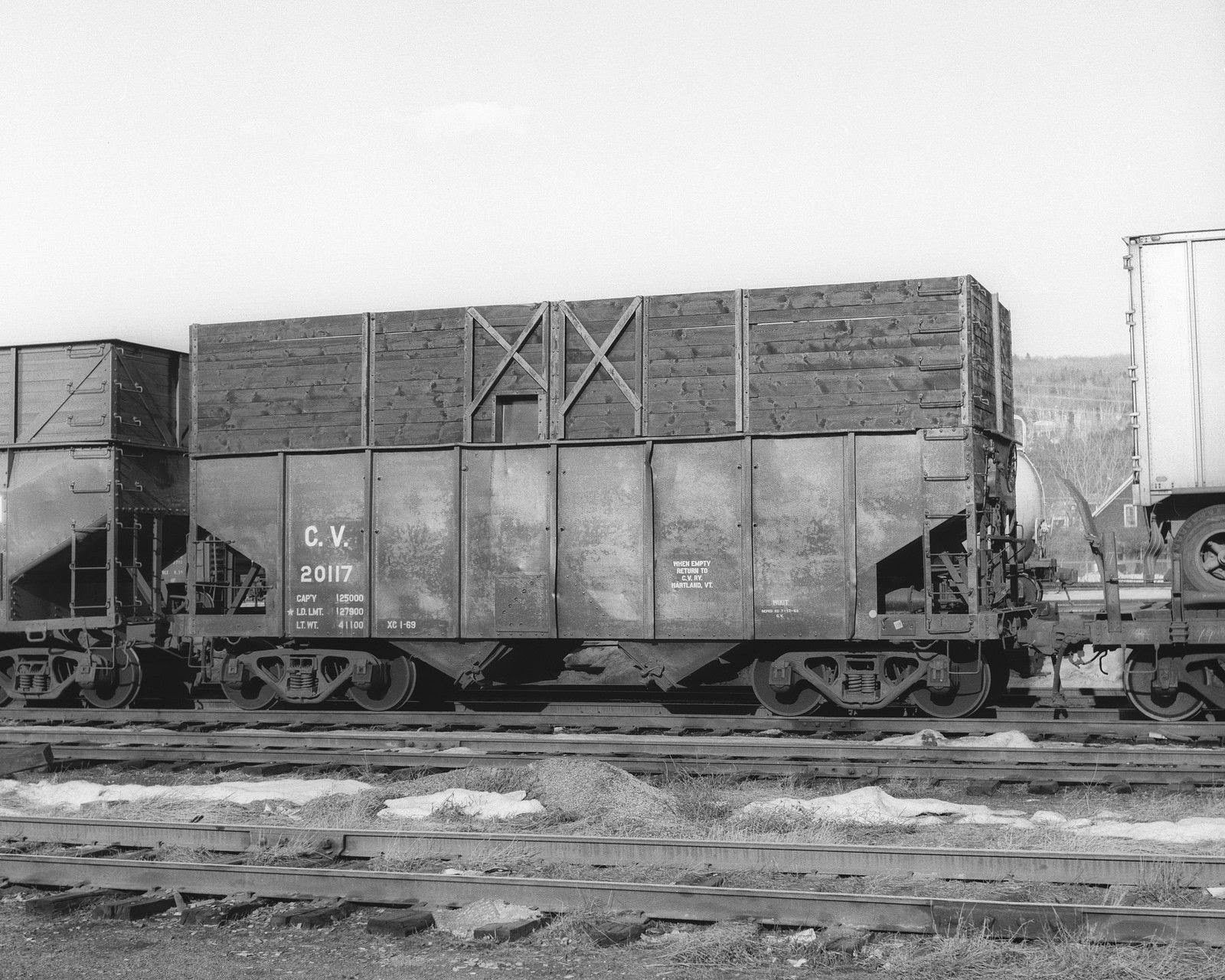 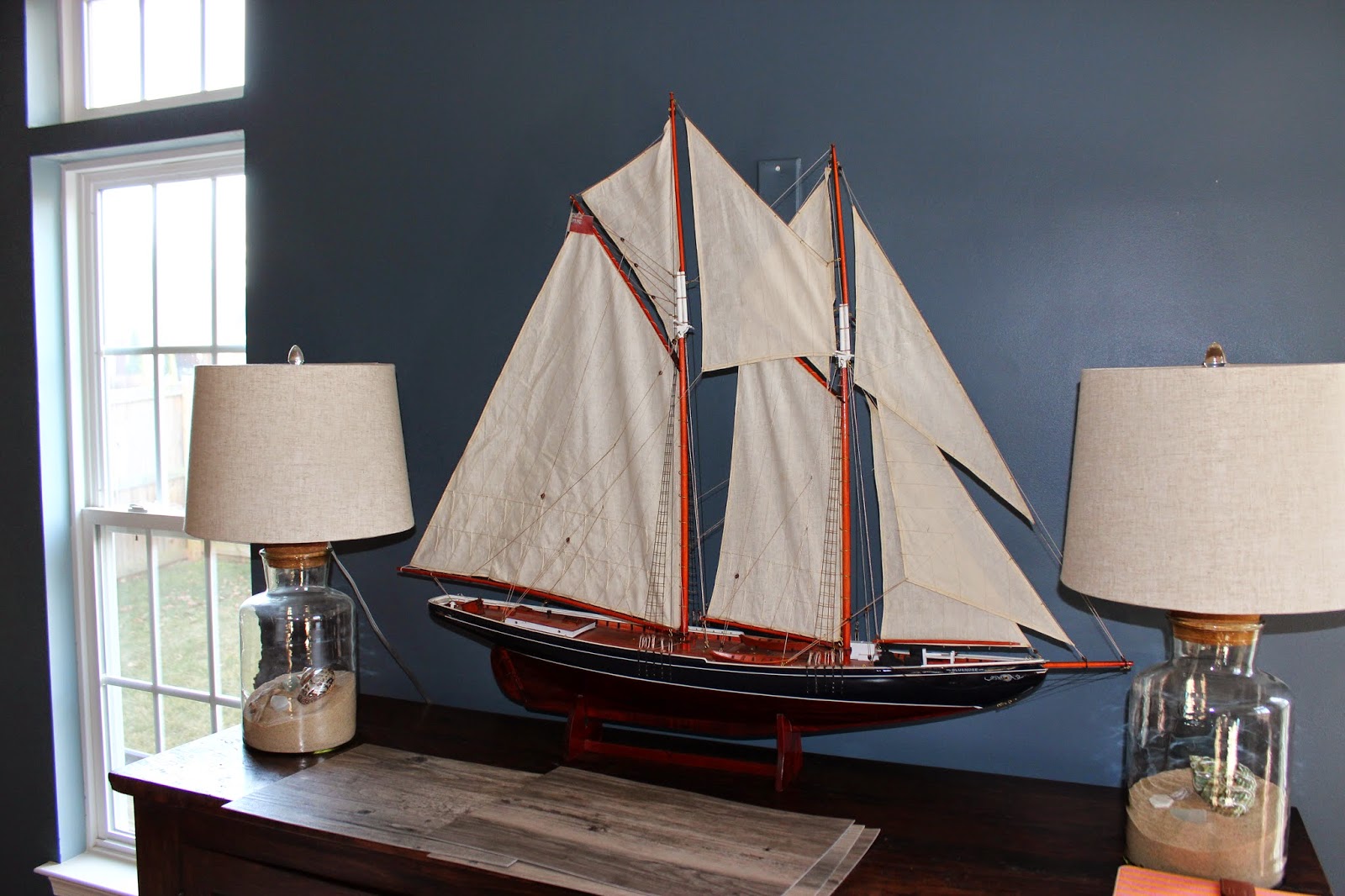 Here's a picture of my most recent contribution to our family room decor - the schooner Bluenose. This was a pre-finished "ready to assemble" model that took a fair portion of a rainy Sunday to convert from a box full of parts (sorry, no "before" photos) to a finished display piece. At least I didn't have to paint it!
The plan is for the ship to sit on a display shelf centered on this wall - the "driftwood" self-adhesive sheets will be used to cover the shelf. Unfortunately Ikea was out of stock….

Update: Dave Emery sent me this link to a Stan Rogers song about the schooner Bluenose. 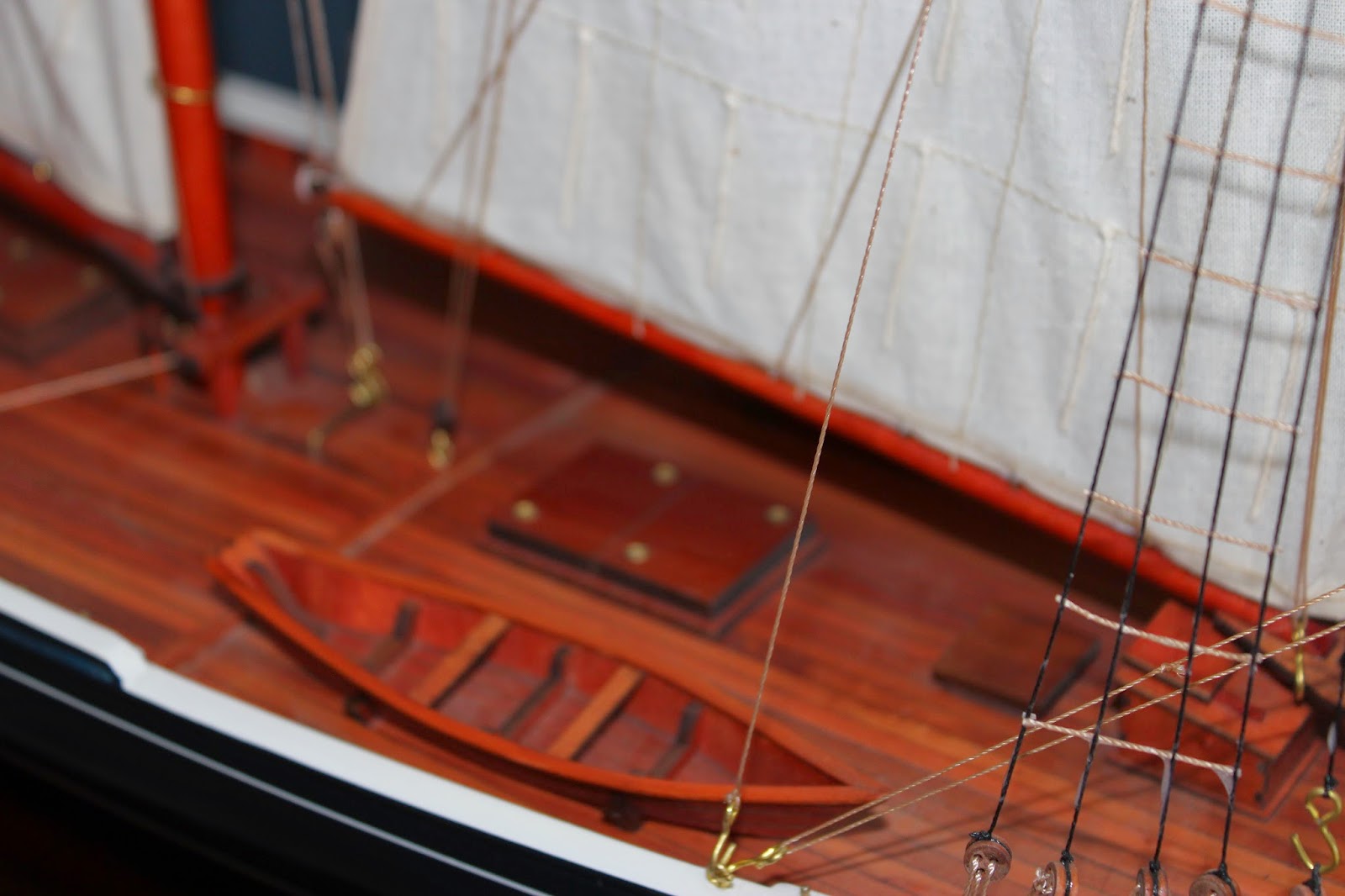 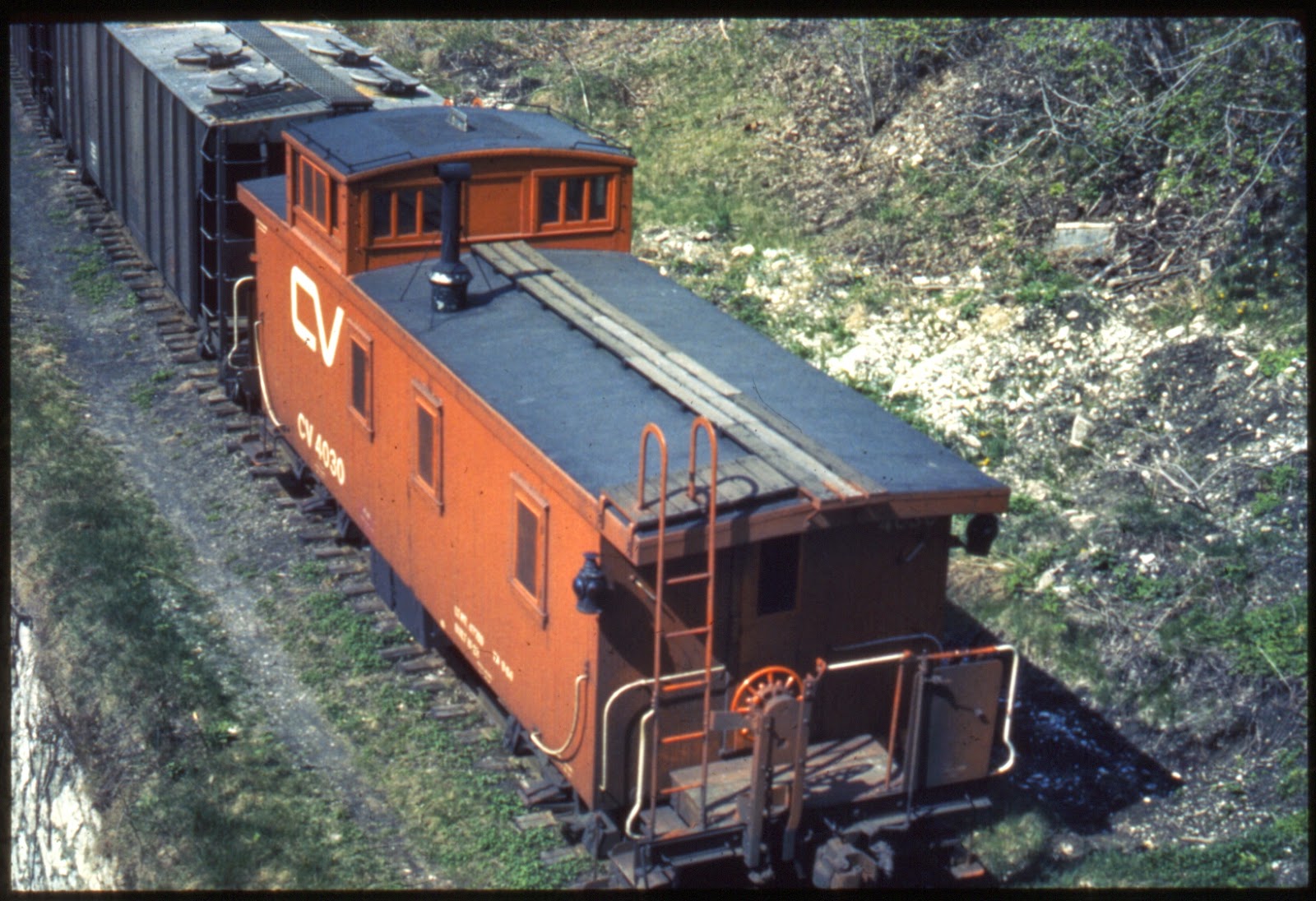 Prototype Modeling and the blogosphere(??)

I end my clinics with a slide showing the header and URL of my blog with the invitation "For more details see … " Like most clinicians I follow this up with a Q&A session. I've noticed the last few presentations I've gotten questions not about the layout, or the clinic, but about blogging in general.
This seems like a good subject to cover in my Getting Real column for Model Railroad Hobbyist since blogging has become a small,  but important part of my hobby.
To add some additional viewpoints to the column besides my own I'm reaching out to some other model railroad bloggers to ask them the following questions (these are some of the questions I've received from attendees at clinics or readers of my blog):

1. What type of blog engine do you use (bloodspot, Wordpress, etc…) and what are any advantages/disadvantages that you've identified?
2. Why did you start your blog?
3. How did you choose a theme for your blog? Have you stuck with that theme or has it evolved?
4. How much time per week (on average) do you spend blogging?
5. How important are comments/feedback? How do you handle comments? Also, have you ever received negative feedback or had any issues with resulting from the blog?
7. What's one piece of advice you would give a modeler thinking about starting a blog?

I'd like your feedback as well, even if you're not a blogger or planning to start a blog. So, for blog readers, I'll add the following questions:

8. How many model railroad blogs do you follow or read regularly?
9. Any particular reason you've chosen those?
10. Do you leave feedback or comments? If so, what was that experience like?
11. Do you read only the newest post or do you use the blog Search function as a research tool?
12. Do you prefer posts dealing with Prototype information, opinion pieces on the hobby, or modeling how-to? Any I've missed?

I look forward to hearing from you. 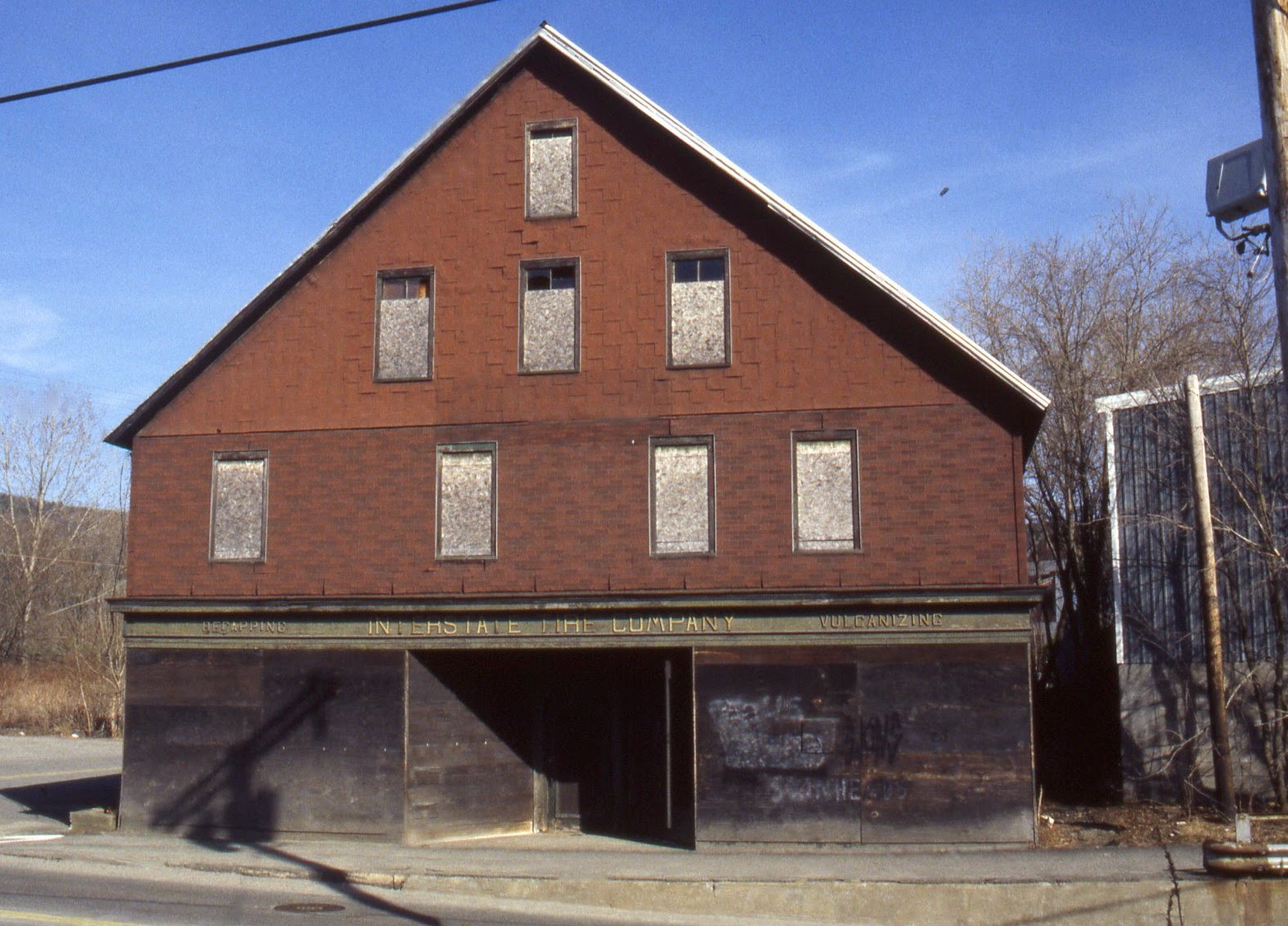 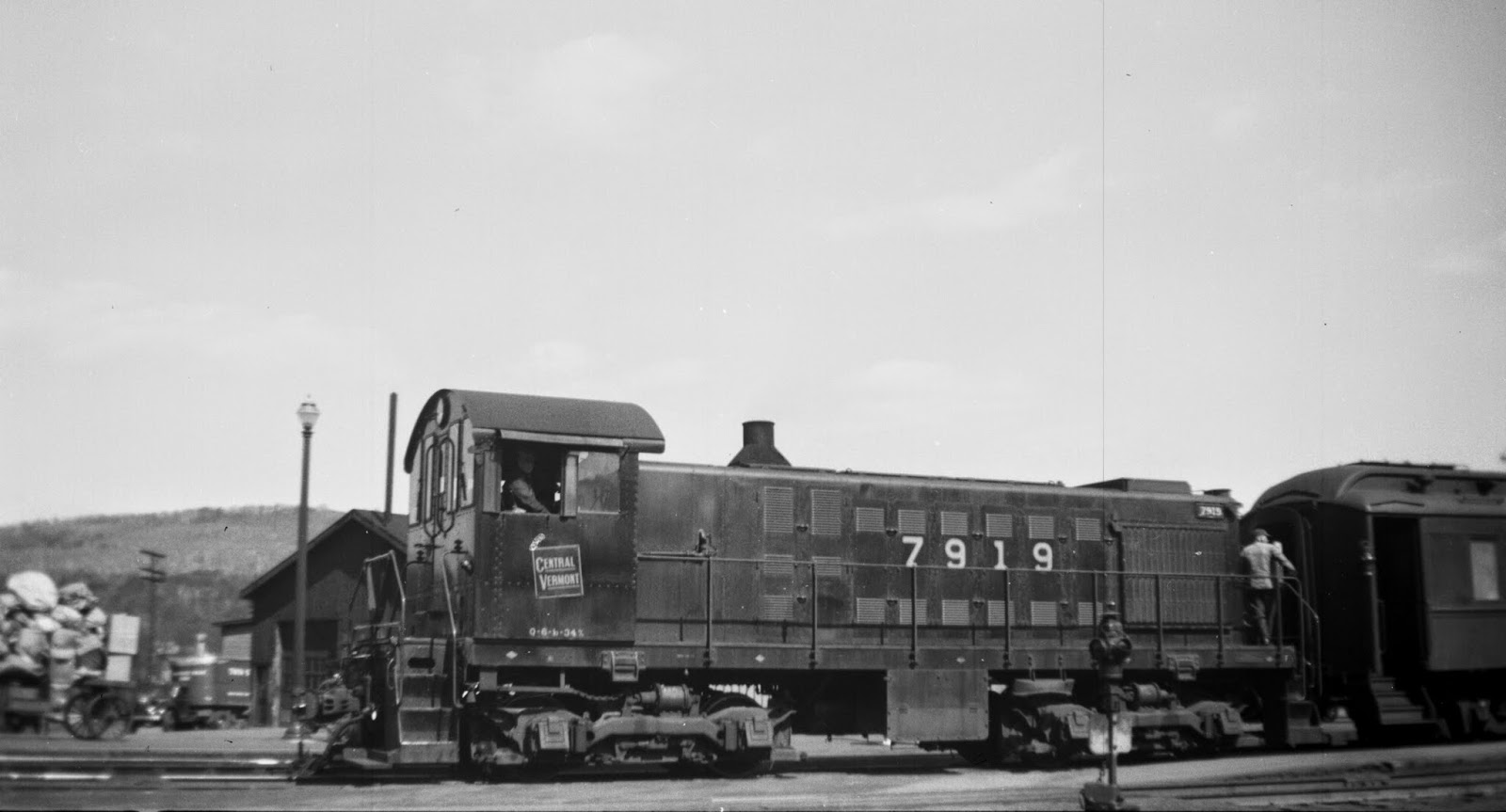