If you looked at Video Update #6 you saw a live demonstration of the swing gate. Actually, the gate in the video wasn't quite complete - so in the interest of full disclosure here are some photos showing that it is indeed more than just a "piece of plywood and a couple of hinges..." 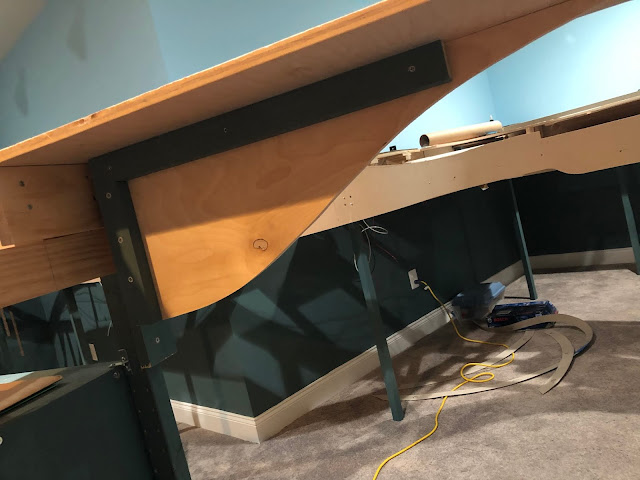 The underside of the plywood "bridge" is braced along most of its length by a plywood brace. Note how the brace gets thinner as it gets further from the hinges - an attempt to minimize sag and at the same time minimize the pressure on the hinges!
That plywood brace is itself strengthened by a couple of pieces of 1 x 2 arranged in an "L".

The hinge end with the bridge in the open position shows the hinge arrangement - nothing fancy here, I told Stic to just be sure everything was really sturdy! I think there's two boxes of screws holding this thing together! 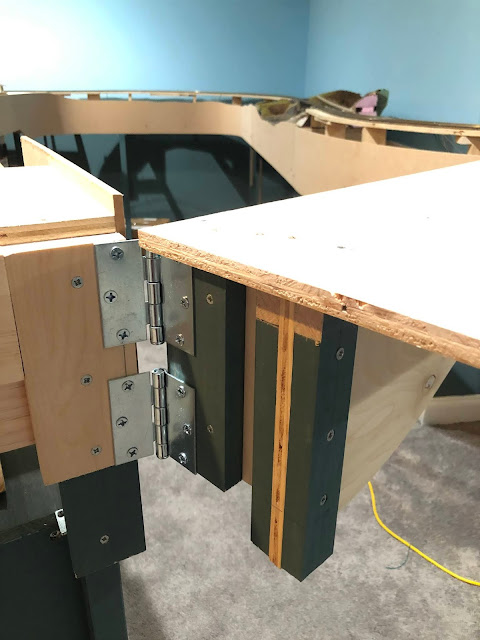 This shot shows the swing gate in its fully open position - it opens up enough to touch the fascia on the layout. 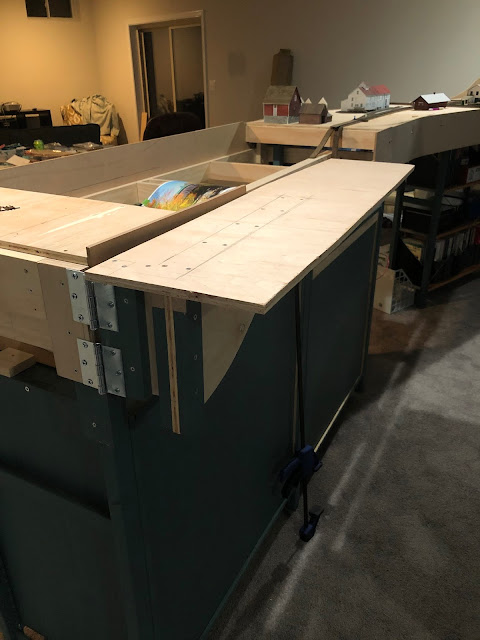 Next trick is to figure out how to get the track in place. Stic tells me that's my problem.
Thanks to Stic Harris for his help with this project, and with all the various thankless tasks I always seem to assign him!
Today also happens to be his 50th birthday. He's taking a well-earned respite from model railroading to enjoy coastal Maine with his lovely wife. And he's officially joined the ranks of those us who complain we're too stiff, sore, or otherwise impaired to work on top of or under our layouts! 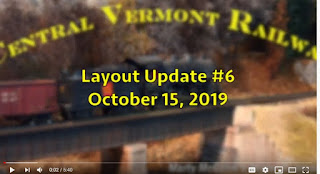 A video update on the Richford Branch layout - including the chance to see Stic Harris conduct the first "walkthrough" of the swing gate.

Plus some other stuff.

What else could you possibly waste 5 minutes and 41 seconds on? (don't worry, it's not Stic the whole time....)

Just click HERE to go directly to the video. 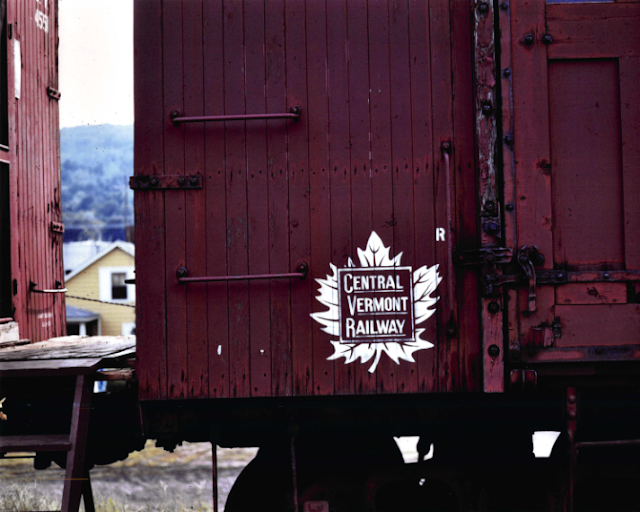 Just about reached the end ...

... of the woodworking phase of layout construction!
Two significant (at least to me) accomplishments in the model railroading realm this week.
First of all, I'm happy to report that the significant benchwork construction is (at long last) completed - that means all the subroaded and fascia has been installed, See below for an overall view of the layout: 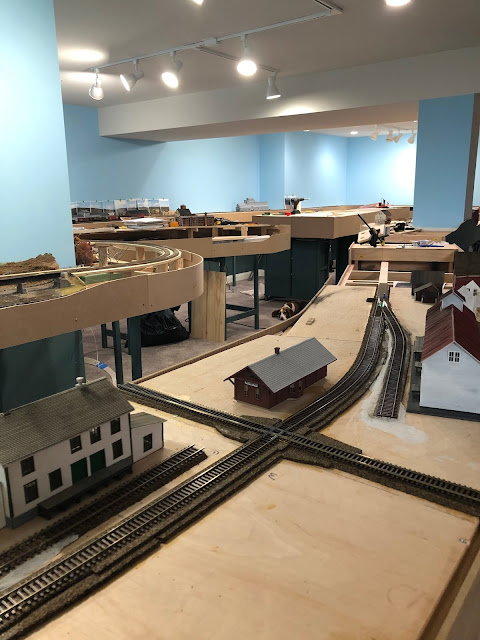 At this point the only construction left is to complete the swing gate and install a couple of shelves in some key locations. The shelves will prove useful for a place for visitors and operators to put their beverages - oh yes, and in case we ever operate the layout formally there'll be a place to store throttles and paperwork and the like that isn't the surface of the railroad!
There's still some track laying left to complete - primarily on the two peninsulas - the shot below shows the CV yard in Richford - obviously it's awaiting roadbed and track! 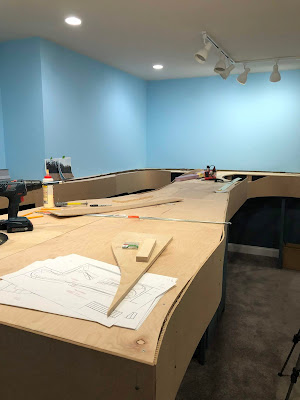 The other thing I finished was a clinic on the layout that I just presented at the NMRA Mid-East Regional Convention in King of Prussia, Penn. For those keeping score, this is actually the second all new clinic I developed in the last 6 weeks - I'm hoping that this one will be a layout progress clinic that I can regularly update. I'd like to get as much mileage out of this as possible!
The clinic was well received despite the 10 o'clock start time (that's 10pm!) and some issues getting my computer to talk to the projector. 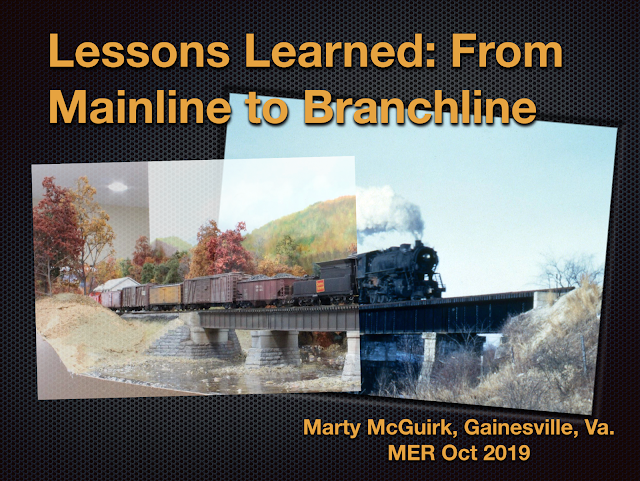 As I mentioned in a previous post, I had high hopes for completing the "major" benchwork construction this past weekend. And, though I made some significant progress on what will be the Richford peninsula, I didn't actually finish it.
Frankly I spent way too much time figuring out how to support the turntable "module". In reality, this is the old Palmer turntable mounted to the same piece of plywood I cut from SNE #1 when we moved out of the Oconomowoc house. Getting it level, lined up, and supported took the better part of last Sunday afternoon.
I managed a fair amount of time on the layout a couple of evenings this week - so I'm very close to getting the benchwork on the Richford peninsula checked off the to-do list.
Hope springs eternal to get this task completed this week. In the meantime, here's a photo showing the current state of the Richford peninsula.