One thing you need when you model a New England railroad is trees - lots of 'em. In my case they come in two distinct categories - foreground trees, ones that are "stand alone" items - and "filler" trees. I decided to spend some time over the last few evenings adding some of those "filler" trees to the area between the mainline and the backdrop. I've started "grassing up" the area between the mainline and fascia edge as well.
This is an example of "large scale" modeling - not in the proportion but in the amount of material needed. I didn't count how many individual Supertrees are now planted on the layout, but it took most of Sunday afternoon to prep the trees, paint them, and install them. I think the time was well spent since this portion of the layout is at last starting to look a little more complete.

I find it hard to believe, today marks the first anniversary of this blog.
It was also one year ago that I started the extensive rework of my layout. Here's the view from the bottom of the basement stairs in late October, 2010: 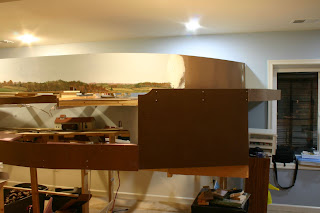 Here's a shot taken from the about the same spot this past September: 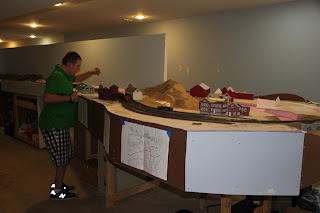 When I decided to change the layout I promised myself all the heavy construction work - benchwork, backdrops, and the like - would be finished within a year. I'm happy to report that I accomplished that, and I've even gotten a fair start at the scenery.
I do need to get the track in White River Junction and Essex Junction sections complete - and that's a goal for the remainder of this year.
The only other "goal" I have is to get the "Front Door" scenery completed - I need to get rid of the pink foam that's still visible in the mill stream area.
I enjoy posting my progress to this blog, and appreciate all the comments I receive on it. I hope you will continue to follow my adventures. Here's to a productive New Year on the Central Vermont!


Coming This Holiday Season . . . from Dog Butt Films, in conjunction with Leaping Hound Productions ....
Posted by CVSNE at 6:05:00 PM 4 comments: 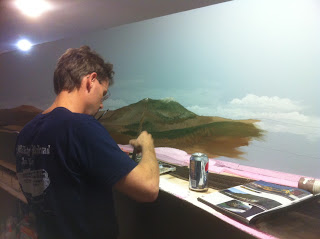 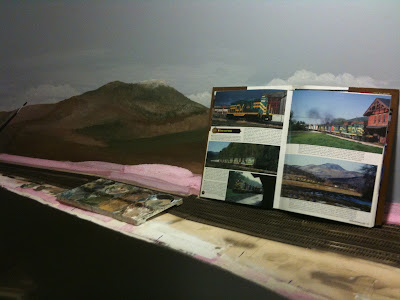 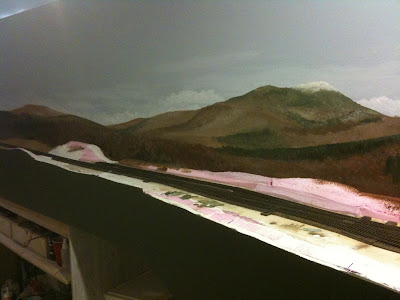 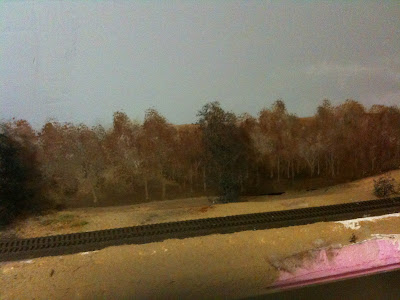 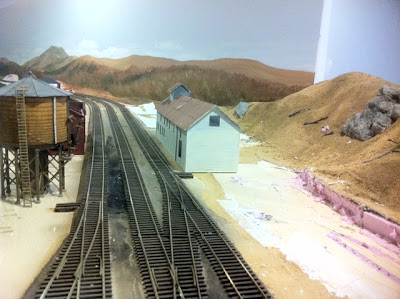 
Just back from an enjoyable weekend tour through the New Jersey countryside with Bernie Kempinski.  We started out early Saturday morning, heading north towards the Garden State. After paying homage to the governors of both Maryland and Delaware (it takes about 15 minutes and $9 to get through Delaware – Maryland is almost as expensive but at least you’re in the state longer) we arrived at Mike McNamara’s “Northeast Kingdom” HO layout.  Mike models the railroads in an around St. Johnsbury, Vt., in 1980.  Lots of colorful engines and freight cars.  Mike was a great host and we had a good time looking at his layout, taking some pictures, and shooting some videos of trains in action.

After lunch – at a local pizza joint, where surprisingly no one was named “Tony” (for the record, we did ask . . .) we headed north.  Lola, the GPS in my wife’s Honda Accord, decided to take us on a circular tour through downtown Princeton – but at least we saw a horse in the middle of the road.

When we arrived in Newton we checked into the hotel and Tony Koester picked us up and took us on a tour through the northern New Jersey countryside.  Tony pointed out all the old railroad archaeological artifacts and abandoned right-of-way.  It was very interesting, but difficult to see in the dark.

We stopped first at Perry Squier’s house.  After meeting “Richie” – a rather large (and hungry) horse, we went to the basement to look at Perry’s Pittsburg & Shawmut.  Set in 1923 this is a very nicely done coal-hauling railroad in the mountains of Pennsylvania.  I especially liked Perry’s signature scene of St. Mary’s Penn.  I also think Perry has done a wonderful job modeling what many consider the “Golden Age” of railroading – the era just before the “super power steam” of the early 1920s.

From Perry’s we headed to Ted Pamprin’s Chesapeake & Ohio.  Set deep in the New River Gorge in West Virginia I especially wanted to see for myself how Ted’s leafless trees look in person when covering a large mountainside.  I’m happy to report they look just fine. Ted had some great tips on landform modeling, including using leveling sand, secured with this thin adhesive, for basic ground cover.  Neat layout – his Thurmond, W.V. scene is right on – and looks great.

After a very nice dinner (although the wait was so long Bernie was able to do an impromptu version of his USMRR clinic on his iPad while we waited in the bar!) we headed over to Tony’s for an tour/indoctrination on his Nickel Plate.  This is a BIG layout – having edited the article on the track plan back in my MR days this was the first time I’d seen the layout basically in place (I visited Tony a few years ago before he had finished most of the basic infrastructure.  The NKP Clover Leaf is a big project – very impressive. I’d classify it as “industrial strength” model railroading – everything  – locomotives, throttles, freight cars, wheelsets, etc . . . has to be done in bulk.  It’s really quite a project, and I admire Tony for his dedication to bring his favorite railroad to life in his basement, and appreciate the chance to operate on it - I had a great time.


While we completely enjoyed the operating session, I, for one, left secure in the knowledge that style of layout was just not right – for me, anyway.  Seeing Mike’s, Perry’s, and Ted’s layouts confirmed, to me at least, that I really prefer the single deck layout arranged with a “panoramic” view over the multi-deck, long mainline at the expense of all else approach.  I felt completely vindicated in my decision to remove the upper deck from my own railroad.  I’m also continually tempted by an earlier era than I presently model – then I realize how much inventory I have on hand and think I should stick with the 1940s/50s era.

Overall, a great trip that left us motivated to work on our own railroads. Now that I have a few weeks at home, the weather is cold outside, the days are short, and it’s time to get something done on the Central Vermont!

Email ThisBlogThis!Share to TwitterShare to FacebookShare to Pinterest
Labels: Other modelers, Road Trips


I have been spending an hour or so a night for the last couple of weeks planning, and re-planning, the Essex Junction scene.
I’m happy to report these efforts are starting to pay off.
This scene and I go way back. The first layout I started building as an adult (when I determined the CV in the steam era was right for me) featured the Essex Junction scene. That one never got past the benchwork stage.  The second time I modeled it was in N scale on a small layout I built in a rented townhome when I was on the MR staff. That scene led to an article on Essex Junction that appeared in Model Railroad Planning.
It's finally time to do this scene again - this go 'round will be HO scale.
Essex Junction is, in reality, two different “scenes.”  The first, and most recognizable, is the area around the trainshed itself.  Here’s a familiar view of the trainshed.

The second, much less familiar scene was area around the wye, just a couple of blocks south of the trainshed.  It was rarely, if ever photographed – at least in its entirety.  One photo showing the wye is this very early image:
Using CV engineering department drawings and Sanborn Maps this map shows the track and most of the industries in, and around, Essex Junction in the early 1950s. 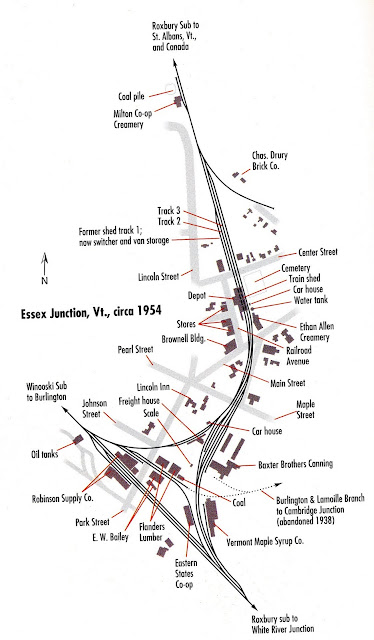 On the layout, I’m taking the approach of making whatever compromises I need to make to have the trainshed look as much like the pictures as possible, even if it means I have to “tweak” the wye scene slightly.  Perhaps the biggest compromise I made was to flip the location of the wye and trainshed, relative to the other modeled towns on the layout.  Coming north from Waterbury (on the layout, around the bend on the peninsula) a train should go through the wye and then past the shed on its way north to St. Albans.  On my layout the train will go through the shed and then the wye.  If I maintained the prototype elements in their correct orientation, the track would curve in the “wrong” direction relative to the most commonly photographed view of the scene.  I felt it was important to capture this angle for the trainshed scene to look right, even if it meant flipping the relative location of the shed and wye.  Besides, when I mocked up the scene with the elements in the “right” place there was little room for the wye trackage. The shape of the basement dictated the placement I’m using.
Due to the configuration of the layout and the basement, I can also add a live third leg of the wye to serve as a live interchange track representing the Burlington branch.  This same track will also permit me to reverse trains between sessions by backing them over from the north end staging yard.
I suppose there are some who would be bothered to no end by the compromises I’ve made on this scene.  I think the finished scene will look like Essex Junction, even if the individual elements are not arranged exactly like the prototype.