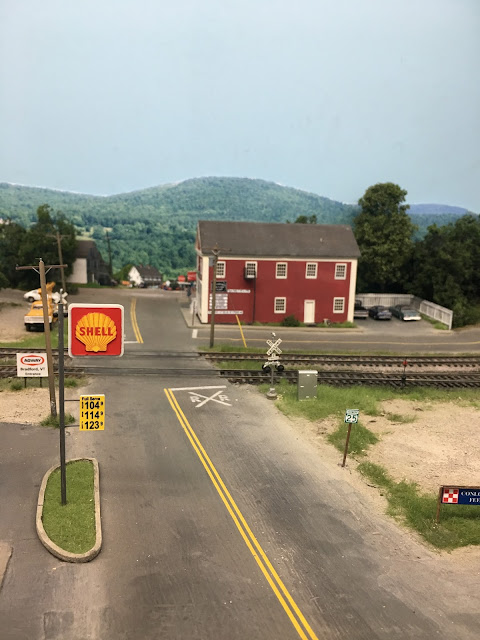 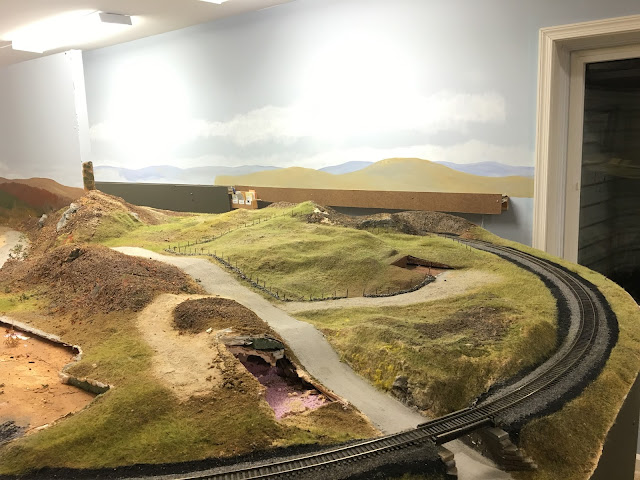 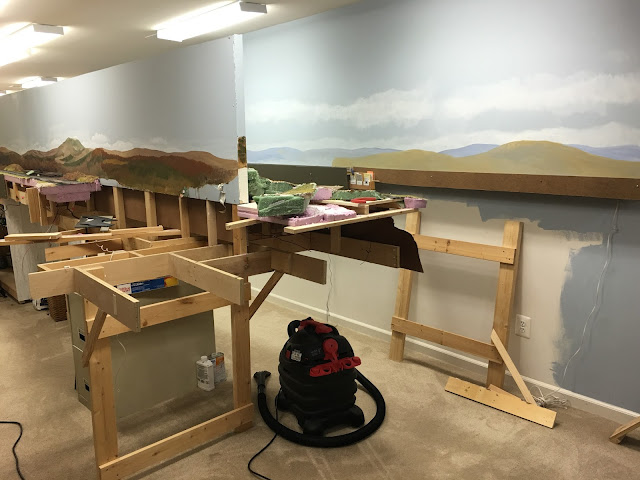 Total elapsed time, about two hours.
Because of how it was built, and rebuilt, this area had some of the most "complex" benchwork. I think taking the rest of the layout out will go even faster.
They always come out A LOT faster than they go in....
Thinking about the next layout makes the process a little easier.

We continue our trip up the Richford Branch with the location many consider the scenic highlight of the line - the bridge crossing the Missisquoi River in Sheldon Junction. This is milepost 10.11 on the line, measured from St. Albans.
The word "Junction" in the name gives a hint as to the other key element of this scene, the CV's crossing with the St. Johnsbury & Lake Champlain RR, Vermont's famed "Covered Bridge" railroad.
Again, this map was drawn using photos, valuation maps, and the railroad's engineering department drawings.
(Click on the map to enlarge it. 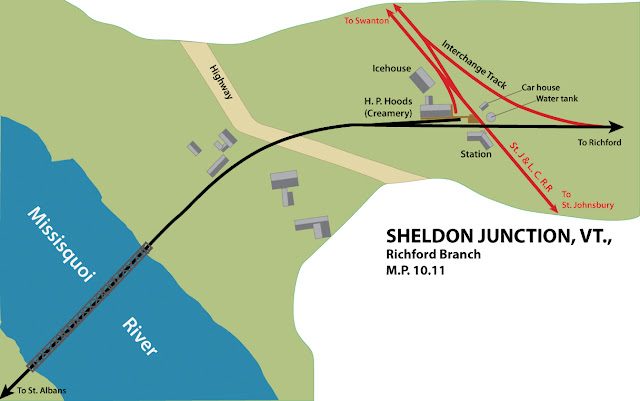 Thanks to all who have written individually or posted to the blog. I've been in the middle of a big project at work, and moving is well, all consuming, so I haven't been able to respond to all the notes, posts, comments, etc... Here's a quick rundown on where this project currently sits:
- The layout is still in place, but not for much longer. Thanks to my folks visiting last weekend and looking to help, the railroad is now devoid of trees ... most of the fall trees have been packed away for possible reuse. My dad proved to be quite the logger.... 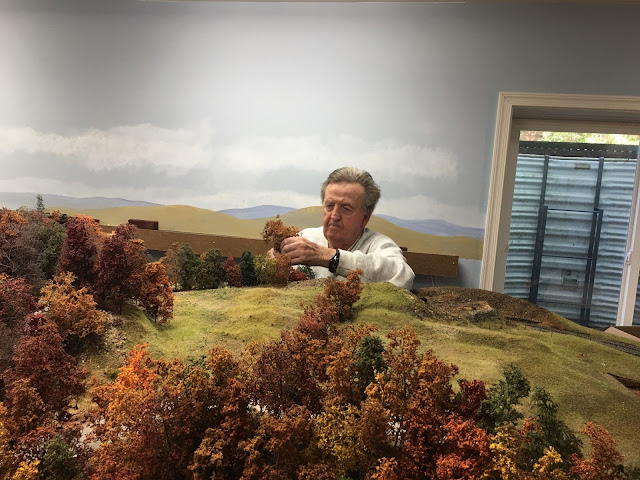 - Monday my folks helped me pack up my workshop - so the lathe, milling machine, scratchbuilding material etc... are all boxed up and ready to go into temporary storage. First, I have to haul all those (heavy) boxes upstairs!
- Over the course of the last couple of weeks of evenings I managed to pack up all the all the cars, locomotives, and structures, etc...
- All the salvageable track (ie. any track without ballast) has been removed from the layout. Any pieces of code 70 track longer than 2 feet have been bundled and packed away. All others bits and pieces of track, broken turnouts, etc...went to the curb.
Next step will be the worst - removing the layout framework itself. That's on the docket for next couple of weekends...
Posted by CVSNE at 2:48:00 PM 4 comments: 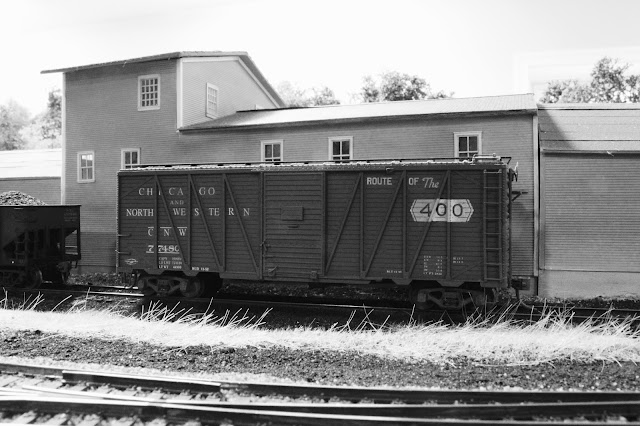 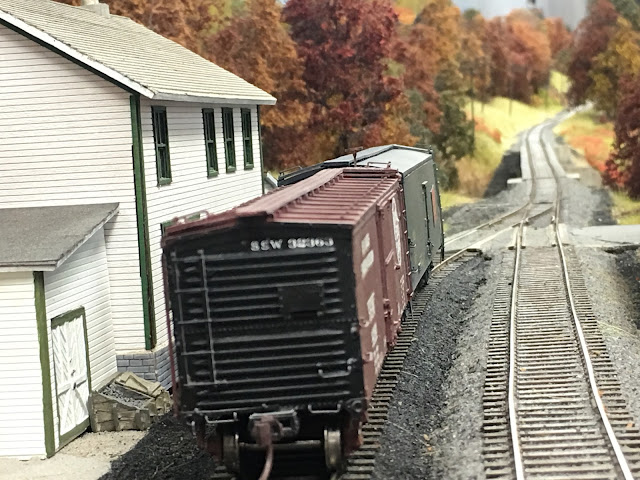 Since I posted the announcement about tearing down the current railroad I've received a lot of inquiries about the 'next' layout. Some have asked if I'm getting out of the hobby.
I've been involved in model railroading in one form or another since I was a kid, so no, I'm not going anywhere (sorry, if you hoped otherwise!) and yes, I do plan to build at least one more model railroad.
I honestly haven't made any final decisions. But I do have some possibilities in mind. As with most things, each has some strong and weak points. Here's where I'm at - subject to extensive change:

1. Central Vermont White River Jct. to Essex Junction, transition era - essentially, rebuild the layout I'm currently tearing down.
PLUSES: I can reuse virtually all the structures, rolling stock, locomotives, etc...
MINUSES: That's a LOT of railroad to cram into any space, build, maintain, and crew as I've learned from all the building, and rebuilding, it's not an easy stretch of railroad to fit into a basement.
But Bernie had a plan for a "dream" railroad that at least includes White River Junction in his last track plan book, so you never know...

2. Central Vermont - Richford Branch -
PLUSES - Could be built one town at a time. Start with Richford, get it finished, and then move down the line. There's several interesting industries - lots of creameries, a couple of feed mills, and a paper mill, as well as interchanges with the Canadian Pacific and St. Johnsbury & Lake Champlain.
MINUSES: Well, it's a branchline, so there is some limit to the variety of motive power and rolling stock - no 2-10-4s here....

3. Southern New England Railway - Basically, revisit my old freelance railroad - Similar to the layout shown in MRP 2000 - start at Palmer and work through the New England countryside.
PLUSES - Freelancing offers a lot of freedom, I can improve a lot of the issues I have with the CV specific prototype, but still have a railroad that looks a great deal like the CV, at least at first glance.
MINUSES - Executing a believable freelanced railroad is a LOT of work - and you constantly have to explain the history of the freelanced railroad to, well, everybody.

4. "Somewhere" in the Carolinas, set in the 1980s. This is getting away from the New England transition era layout - but I remember rail fanning that area at that time.
PLUSES - A fresh start is sometimes extremely appealing. I know a little, but not much, about rolling stock of that era for example. More to learn keeps the hobby fresh. It would offer a chance to model some different scenery - a wood dock with some shrimp boats tied up, with marsh grass along the banks of the rivers, would be neat and offer a scenery challenge.
MINUSES - This would represent a wholesale replacement of the considerable investment in time and money I've made in the transition era equipment.

5., 6, 7, etc., . . . summarized as "Something in Proto 48" (or N, S, scale, or even narrow gauge, or ??? . . .
I'm not discounting any options - I've actually gotten suggestions or hints to consider several of these, but I'm practical enough that it would be really, really difficult to deviate from HO at this time. 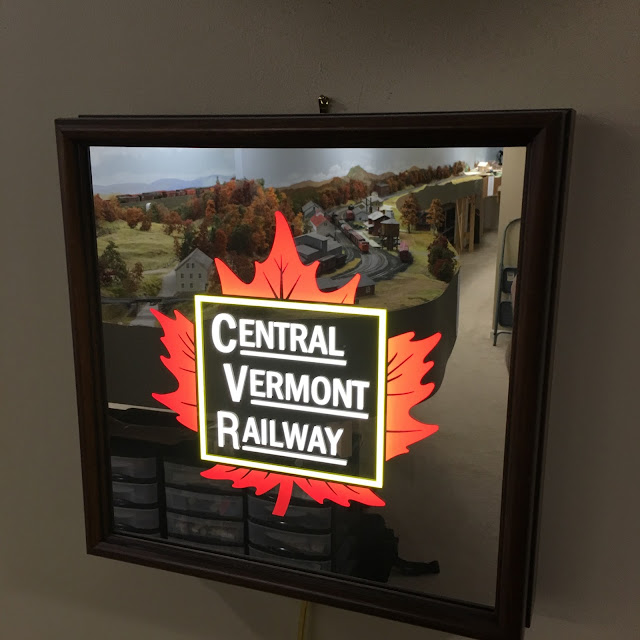 Petition to Abandon the Line

I had the pleasure of hosting an open house for the NMRA Potomac Division last Saturday. Considering this was the nicest weekend weather-wise we've had in about a month, I was pleasantly surprised by how many members (36 in total, according to the sign-in sheet) stopped by to see the railroad.
John Paganoni manned the check in desk upstairs, which allowed Christine to escape. Stic ran the trains back and forth (and back and forth). He seemed to be having a good time. Beauregard and Molly opted to go to Doggie Day Care for the afternoon, although they did have a chance to visit with Stic when they got home. 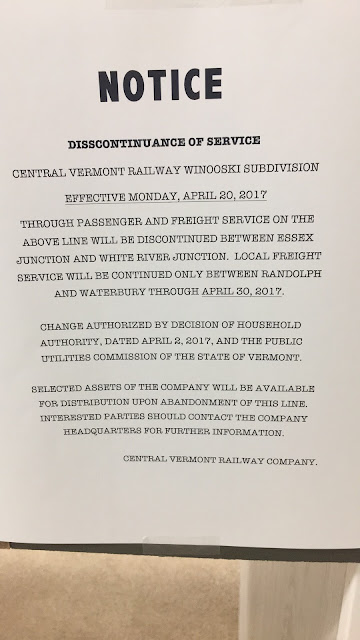 This layout's days are numbered - in fact I spent some time yesterday putting cars and locomotives back in their boxes, in preparation for the scrapper's train that is expected to show up sometime next week. I'll start by removing the around the walls portion of the layout, keeping the peninsula in place for a short while longer in order to have it evaluated for the NMRA Scenery Merit Award.

While some consideration was given to salvaging portions of the railroad, it seems much more logical to simply clean sheet the thing. So, with the exception of Williams Creek, which is a small section on it's own framework, the rest of the layout will be broken down to its basic components - with a lot of it going to the curb.