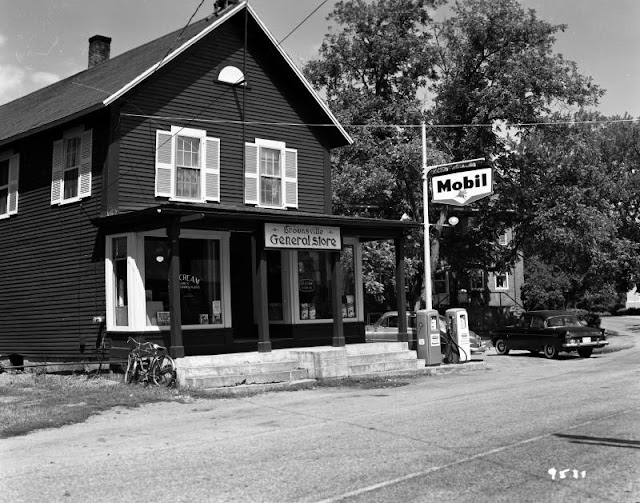 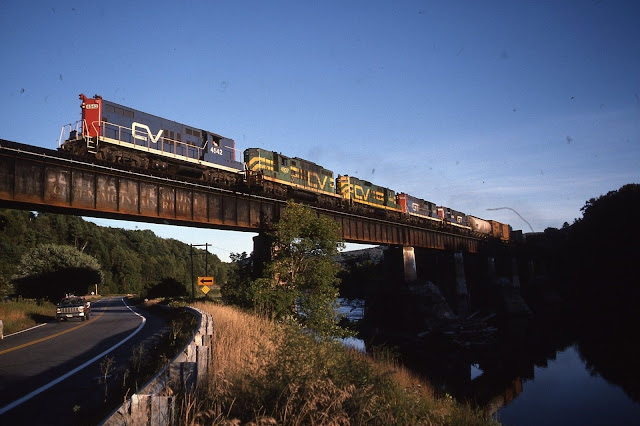 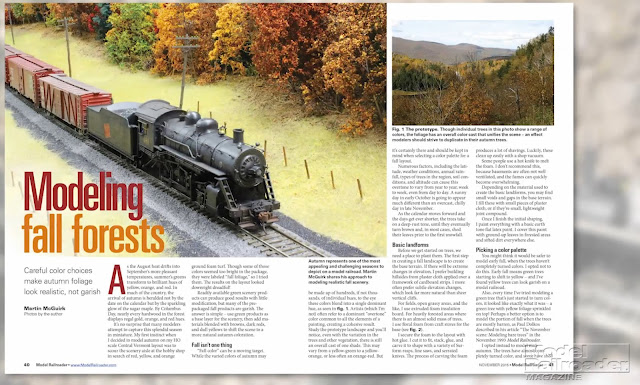 Model Railroader editor Neil Besougloff asked me to put together an article on how I create the fall scenery on the layout.
I did and sent the article to Neil a few months ago. It will be appearing in the November 2015 issue of MR - available shortly. You can see a snippet of above (screen capture from this "coming soon" preview.) 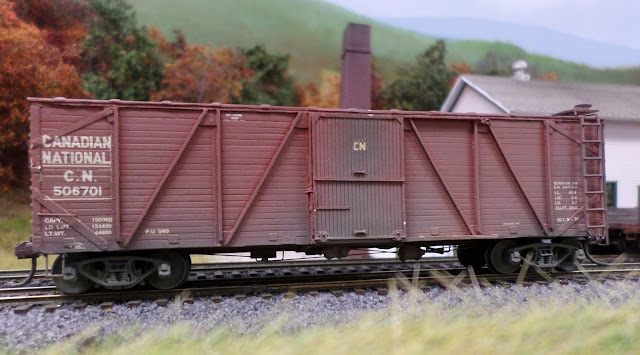 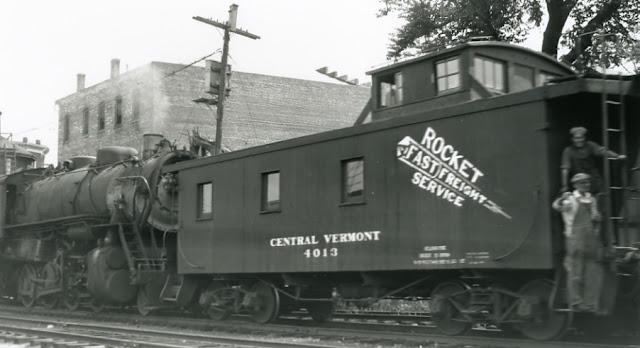 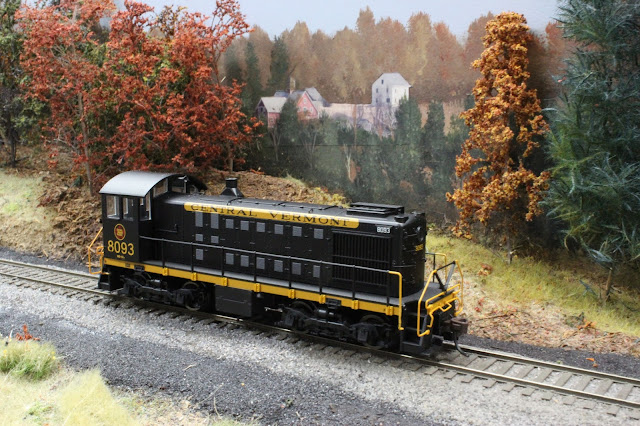 A rare event for any Central Vermont modeler is being able to get a factory-painted locomotive pre-painted for the home road. Come to think of it, other than some RS-11s I don't think anyone has done factory-painted models for the CV - at least not locomotives. 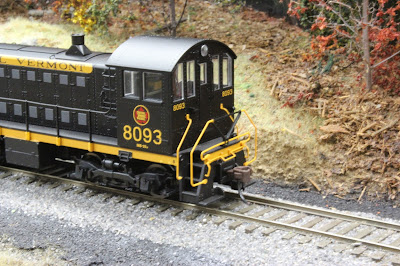 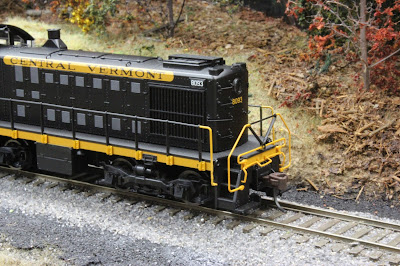 While it means a lot of fun modeling projects, I enjoy those rare moments when I can pretend we're like UP or Santa Fe modelers and simply open a box….
This is the new Atlas HO S-2 - with factory-installed ESU Lok Sound.

Just got back from the NMRA national in Portland. Actually, we got back Sunday night, but have only just now started to get caught up on things like this blog.
We had a great time - Portland is a fascinating place. I'd say it was weird. Apparently, the locals know this ... 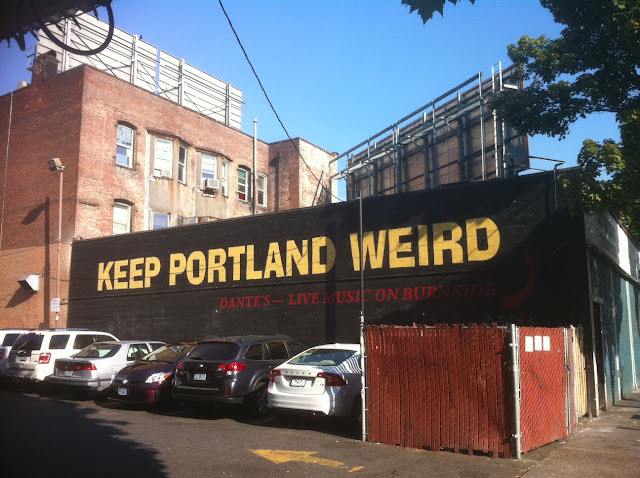 Couple of highlights of the trip included spending the day in the car with Bernie and Dale Miller taking in the Layout Design SIG tour....I'm sure we drove Dale nuts but he was a good sport about it. (For the record, we warned him...)
We saw some neat layouts on the tour - including a huge 40x40 foot GN layout - with this neat yard 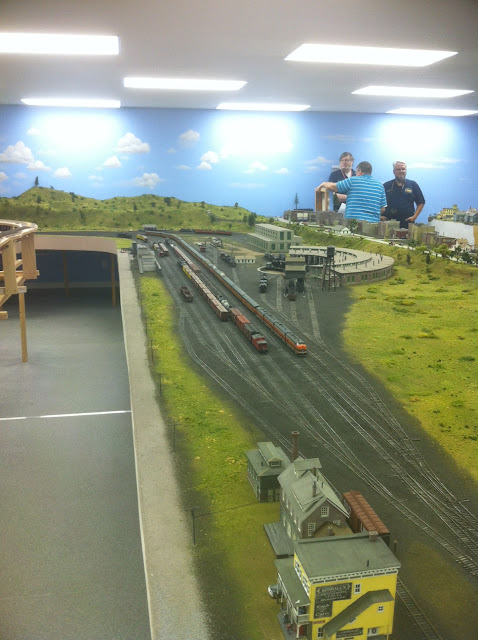 Bernie couldn't help reminding me what I could do with White River Junction in such a space! Photos of these huge home layouts (come to think of it, ALL the layouts, with the exception of the one with the car float described below, were pretty big!) were immediately texted to our wives as part of an ongoing spousal convincing strategy…to date such efforts haven't panned out all that well - but there's always hope!
Another highlight of the SIG tour was a double-deck layout with a car float on the lower deck connecting to a branch on the upper deck - the entire harbor section could be raised or lowered to move cars between the two sections. Quite neat, and very effective! 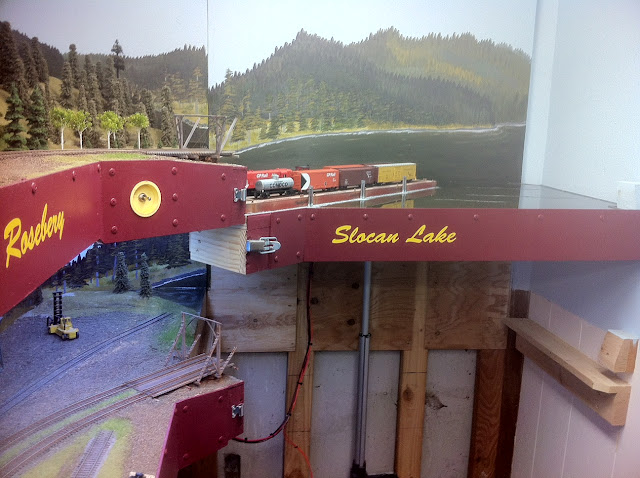 We also visited a neat club layout - another very large layout - but what really made it unusual was the "scratchbuilt" basement. These guys spent five years digging the basement out of the underside of a community center. We asked if this "discouraged" some members - apparently the club experienced some attrition, but those who stuck it out have a wonderful layout space. According to one member I spoke with, building the layout was almost inconsequential after hauling out thousands of buckets of dirt!
Back at the convention hotel I did two sessions of my Modeling October Scenery clinic - the first was at 10:00 pm on Thursday - which is 1:00 am East Coast time. I'm told it went well (I managed to keep Bernie awake... which is really no big accomplishment!)
I can't say how it went since honestly, I have no memory of it!
Second time I did the clinic I, and the audience, were a little more lively. I was happy to see Pete Magoun in the clinic - and appreciated his comments and questions. So much so that despite the fact that I know Pete, knew it WAS Pete, for some reason I kept calling him "Miles" - obviously I had Miles Hale on the brain....Sorry Pete!
Friday was at the National Train Show - Neil at Model Railroader confirmed my article on Modeling October Scenery would be in the November issue of MR, so look for it then!
At the National Train Show I took in all the various new products and manufacturers booths. On Saturday two friends of ours from Oregon (both non-model railroaders) wanted to see the train show. It was fascinating to see what held their interests compared to what a "hobbyist" would focus on. For example, there was a barnyard scene with moving chickens - (EDIT: Here it is in the Walther's Catalog) hold your fingers above the chickens, sprinkle on some imaginary chicken feed, and the little HO scale hens peck and turn around. Apparently it amuses an M.D. from Oregon for hours....or at least minutes!
I didn't take too many photos of the layouts in the show hall. I did think this scene on the same layout as the aforementioned chickens was worth sending to our youngest son...(I'll let you guess why!) 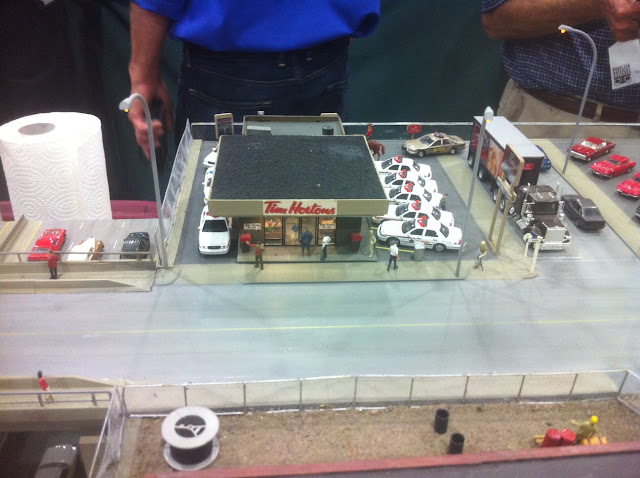 Two very large layouts that were extremely well done were the N and HO scale Free-Mo layouts. Here's a scene from the HO layout - one of many worthy of study. (Our friends were busy trying to find the little coyotes...easily amused I guess!) 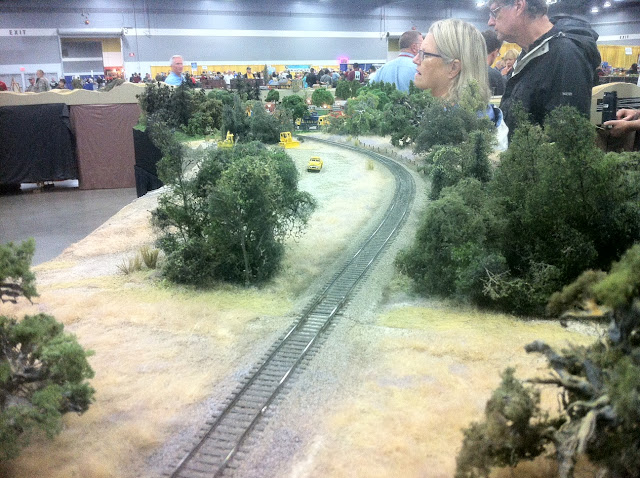 This On30 layout was a small stand alone layout - the modeling was excellent and the trees fantastic! I was also fascinated at his use of multi-color LEDs to create various colors and styles of lighting - I've heard people suggesting this but haven't seen it done. Two photos taken - lighting changed with a touch of a button on a handheld remote. 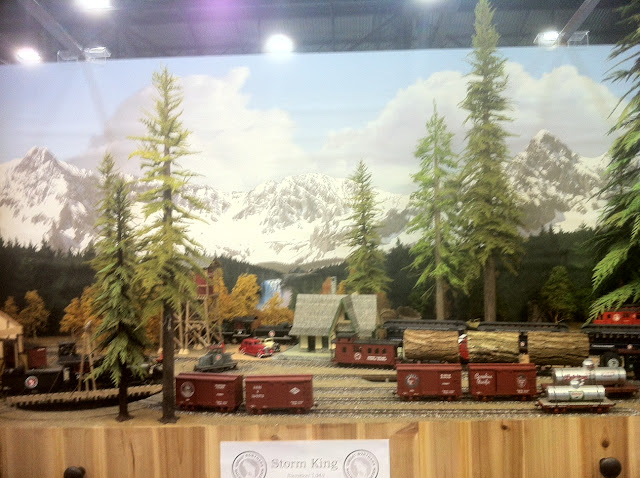 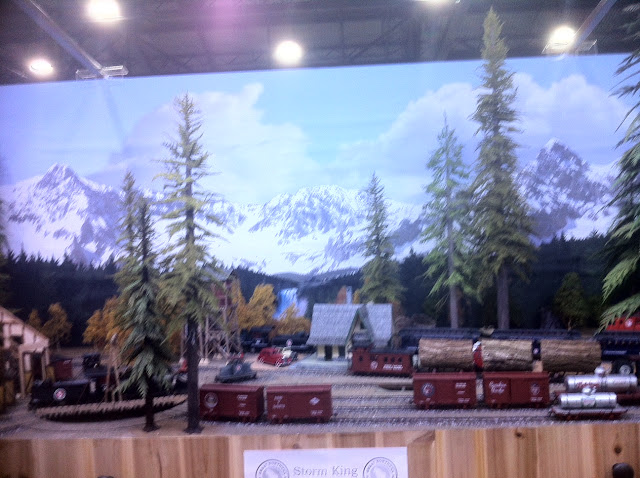 I had a good time visiting with lots of old friends, and made some new ones. I finally got to met Gerry Leone in person - I've been admiring his layout and modeling for years and it was great to have a chance to chat with him face to face.
Met a number of people whom I've only known through various podcasts over the years - and had dinner with a bunch of them on Saturday night.
All in all a great time. Christine had a wonderful time in Portland also. We'd be happy to go back.
Posted by CVSNE at 2:13:00 PM 8 comments: