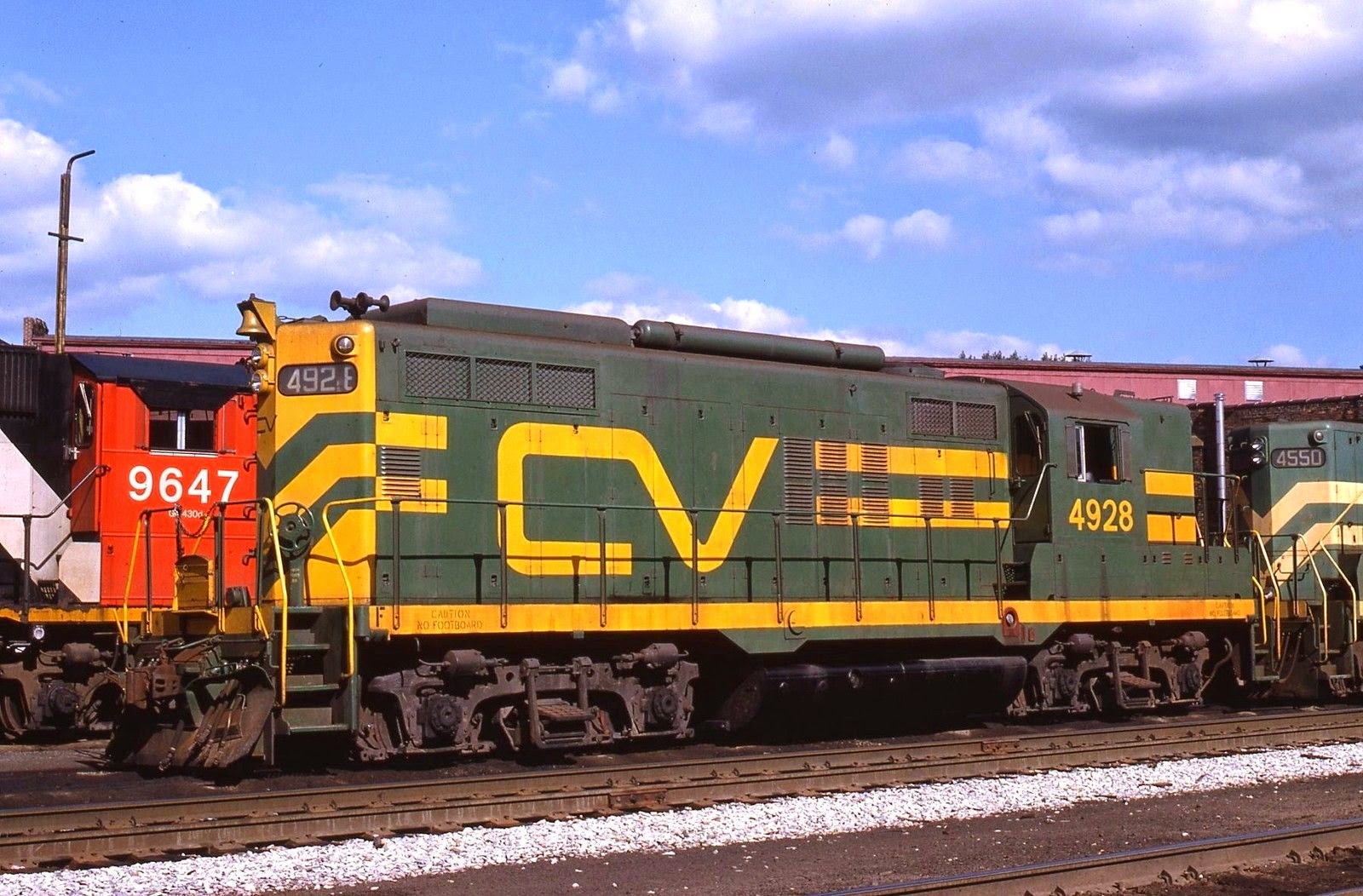 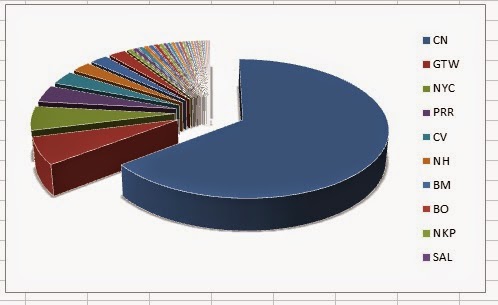 Each accounted for far fewer cars - or for a total so small it was insignificant.
I noted the percentage of the total by roadname didn't come even remotely close to reflecting the national fleet, although the totals seem to reflect some regional "bias" (greater percentages of New England/Northeastern region road names, but not by much). I was especially shocked at how few NYC and PRR cars (based on the % of these roads rosters compared with the national fleet at the time) appeared in our sample data. Not sure what I learned from this exercise, except that out of a fleet of 100 boxcars fully half should be CN, with almost any other road name represented as long as you don't include too many of any one road name. The thing is, if one were to model a roster to these percentages and then compare the resulting trains to prototype photos, the result may be defendable as somewhat "authentic," but I don't think they'd look right!
Posted by CVSNE at 2:12:00 PM 8 comments:

Okay, I'll admit my last post made me sound a little (but not much!) crankier than usual. That post actually came from an email I sent a friend who reported a less than satisfying visit from a model railroad "expert."
A combination of that, and some modeling "blahs" that have set in lately, led to that post.
I find looking at trains running on a beautifully executed layout is a great cure for those model railroading blahs....

Here's a link to a video showing one of my favorite layouts - Jim DuFour's HO scale Cheshire Branch of the Boston & Maine.
The video follows B&M 2-10-2 #2908. The Whyte system of locomotive classification indicates a 2-10-2 is a "Santa Fe" type - on the B&M they were nicknamed "Mudsuckers."
Click on the photo above for the link or click here:
http://youtu.be/LG0WnUKiZ7k
Enjoy!
Posted by CVSNE at 9:27:00 AM 1 comment:

The type of thing one reflects on during really long commutes
Model railroading is many things, but one thing it's not is some sort of epic struggle for the hearts and minds of men.  But you might think that's the case after reading some chat lists, blogs, and forums. Allow me to summarize:
"How much detail is enough for any one particular model on the layout?...Does every element have to be "hyper" detailed, or is "super detailed" sufficient?...If we're not approaching all this as true artists then we're just wasting time...Every project should somehow advance the state of the art…Oh, and while you're at it….Get more kids involved in the hobby."
You'd think we were splitting the atom or creating the next Mona Lisa ….

I get the model-building aspect of model railroading, I really do. And I even enjoy the challenge of working a local freight or switching the yard during formal (or even informal) operating sessions.
But I am puzzled by those who believe we need to duplicate every nuance of the prototype, including work rules, with the same fidelity we once reserved for locomotives. The latest buzzword seems to capsulize this approach as "recreating jobs." Frankly, I'm not sure I fully understand it. And please, don't bother trying to explain it to me.
Of course, that's fine, if that's your game, but frankly I think there are many equally valid reasons for building a model railroad that have nothing to do with "recreating jobs."
My goal that drives the considerable investment in time, energy, and money I've made in this hobby is to recreate, in three dimensions, several key scenes and the equipment from my prototype. Every time I've gotten further away from that goal - even a little bit - I ended up spending (wasting?) resources.
There was a point where I was getting advice from some very seasoned modelers/operators to do things that simply didn't sit well with me - but even when the advice started to seem at odd with my goals and I could sense things were going astray, I kept with it - for a while.  I did it since I figured this was my first large home layout and they'd built successful railroads - so they must know "truth."
This advice ranged from considering another prototype to model
- since that would offer more operating interest to the operating crew -
to focusing on a different era
- which is "easier" to get RTR equipment for than the one I chose -
to adding more infrastructure and additional trains
- to support a larger operating "crew" that may or not ever show up -
to the aforementioned focus on recreating jobs
- since that's what the "serious" modelers are doing ….
Notice a trend here?
All of this advice was well-meaning, but inherently wrong since it was predicated on what others thought I should be doing. And it was grounded in their goals and motivations, not mine.  And the further down this path I went the less and less I liked my layout.
In the end I decided to make whatever changes were needed to create the layout I wanted. Getting from there to here has required lots of thinking, planning, demolition, rebuilding, and tweaking - most of which I've shared through this blog. Think of it as "layout design with plywood and plaster" instead of pencil and paper.
The process is starting to pay dividends. Although it certainly has not been "fun" I can finally see the light at the end of the tunnel and this post represents a turning point in that I've at last finished the last of the major "rebuild" efforts that started close to three years ago.
That means there will hopefully be a lot more countryside and less raw plywood and styrofoam in the coming months.
So, what's next?
There's a lot of prototype research I'd like to do, and a lot of  modeling projects that have been on hold way too long while I've been screwing around building a layout designed to please a whole bunch of someones other than me.
As for everyone else? If they enjoy the layout enough to come look at it and/or operate it, that's fine.  If they don't, well, that's okay too. I'm not building it for anyone but myself. For me it's not high art - nor is it an attempt to "recreate jobs." Frankly, it's something between a craft/art project and a giant game board. Really, it's my own time machine, giving me a window into the past colored with my point of view of what I think it was like "back then."
And I'm at long last content with how things are shaping up.

It's taken me a LONG time to get to this point. - Marty 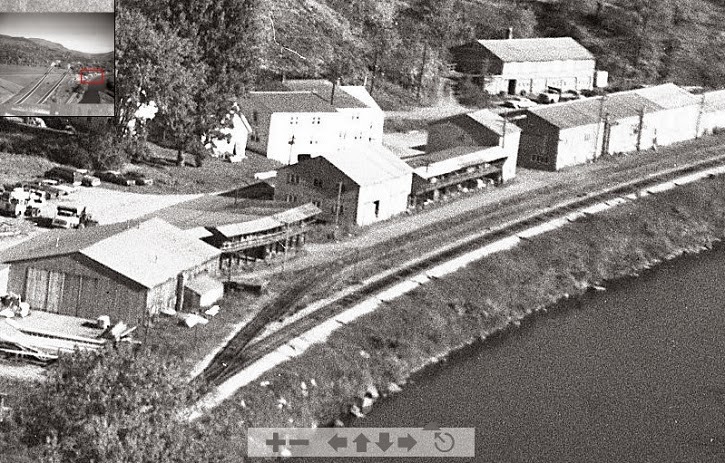 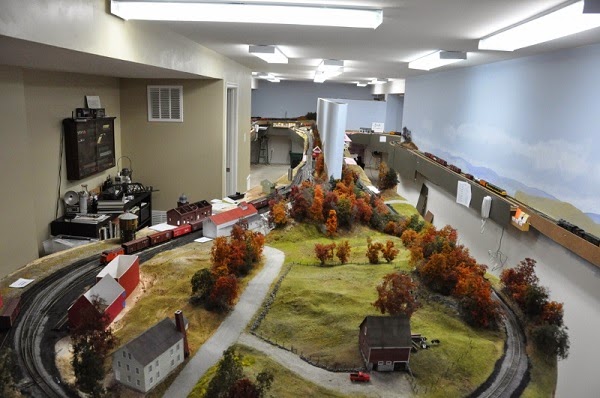 I figured it was time I published a brief description of the layout using the familiar Model Railroader Magazine style "Layout-At-A-Glance" format.


Prototype: Roxbury Subdivision of Central Vermont Railway
Locale: White River Junction – Richmond, VT (not all towns modeled)
Period: September, 1954
Scale: HO (1:87.1)
Layout Size (roughly): 15 x 48 with a stub ended staging yard in the utility room
Style: Around the walls with center peninsula
Benchwork: Open grid
Roadbed: Cork, trimmed to width of ties
Track:  Primarily Micro Engineering Code 70 w/#6 turnouts – with some Peco Code 83 curved turnouts
Mainline Run (approx.): 150' (north staging entrance to south staging entrance)
Maximum Grade: 0%
Minimum Radius: 32” main; 24” industrial sidings
Power & Control: Easy DCC (CVP Products) DCC, manual point-thrown turnouts
Backdrop: Handpainted on drywall (on walls) and 3/16" Masonite on center peninsula
Scenery: Combination of cardboard lattice and plaster cloth or pink foamboard in open areas with Florist foam in heavily wooded areas
_______________________________________________
As this blog closes in on 170,000 unique visits I'm amazed that so many are so interested in what I'm doing. I only hope the readers of this blog get some inspiration and ideas for their own modeling efforts - even in those cases where I provide an example of what NOT to do!
For my part I learn a little about the layout, and some things about myself, from each post I write. Reading through each line in the above offers some interesting insights hidden just behind the rather terse descriptions.
For example, when I started building this layout I thought I would handlay most of the turnouts - over time I've found I prefer using prefab track wherever possible. I have some handlaid turnouts and they work fine, but I don't relish the thought of handlaying turnouts, so I don't do it. At this point I think there's two or three handlaid turnouts on the layout - all in White River Junction.
I also find it's easy enough to transition from code 70 to code 83 that I've been happy with installing Peco code 83 turnouts where needed to match the track geometry. When I started I was hung up on having everything code 70 since it "matched" - some paint and ballast and I find I have to look for the transitions between the various rail sizes to find them.
Writing the "Scenery" description was the most telling - I use any of several scenery methods depending on the scene, the material I have on hand, and what I feel like working with at the time. I'm pretty sold on florist foam for areas that I know will be heavily forested - but otherwise it doesn't matter much whether I use plaster cloth or pink foamboard. A coat of paint and some ground texture and the results look the same.
This list was prepared strictly for the blog. At this point there's no plans to do a "layout visit" type article on the layout - the layout simply isn't far enough along and, frankly, I'm not sure it would be worthy of such publicity. My efforts on the layout tend to show up from time to time in my Getting Real column in Model Railroad Hobbyist. That seems to be enough exposure. Besides, I'm having too much fun sharing my efforts through this format.
Posted by CVSNE at 10:06:00 AM 4 comments: 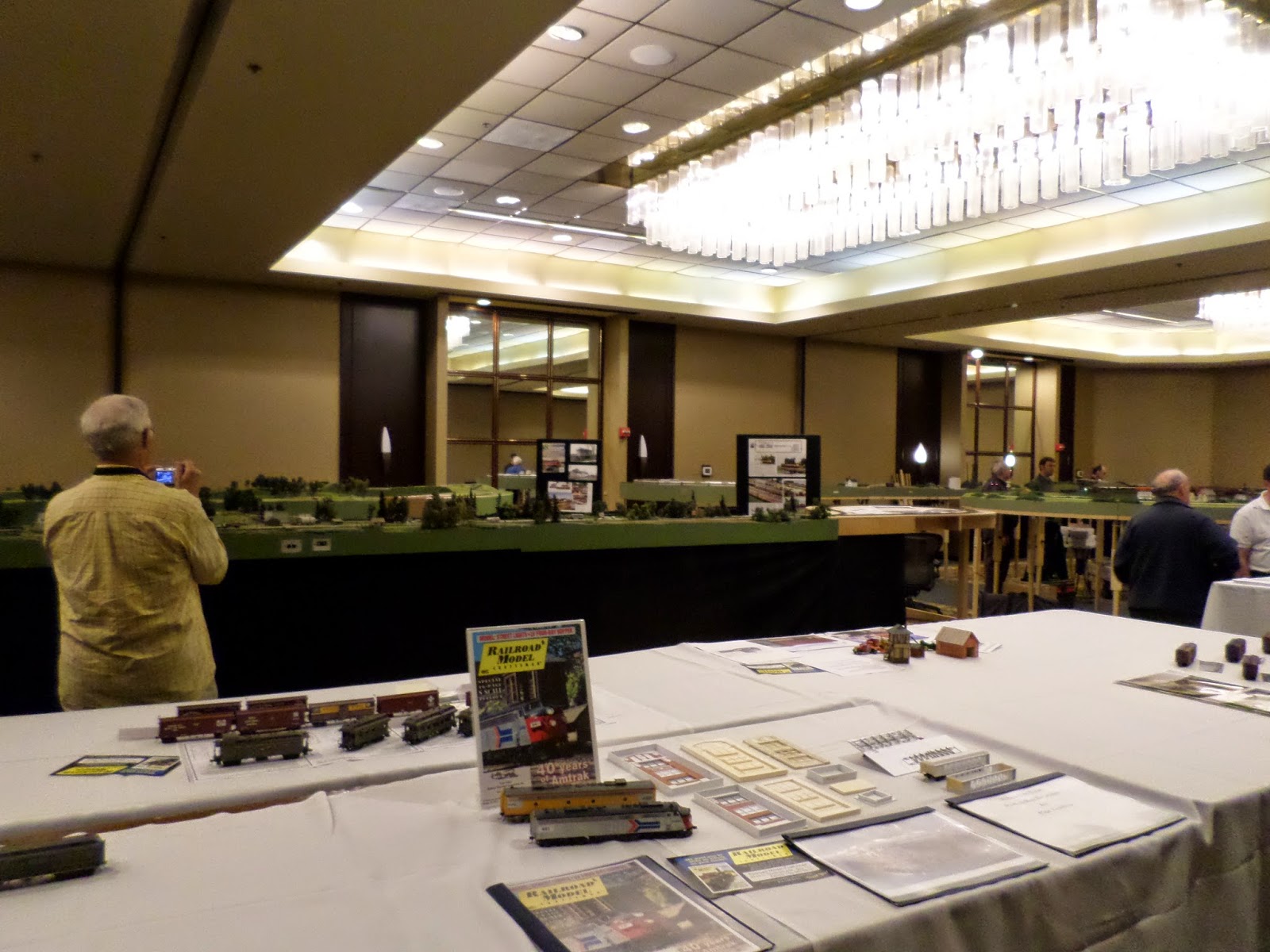 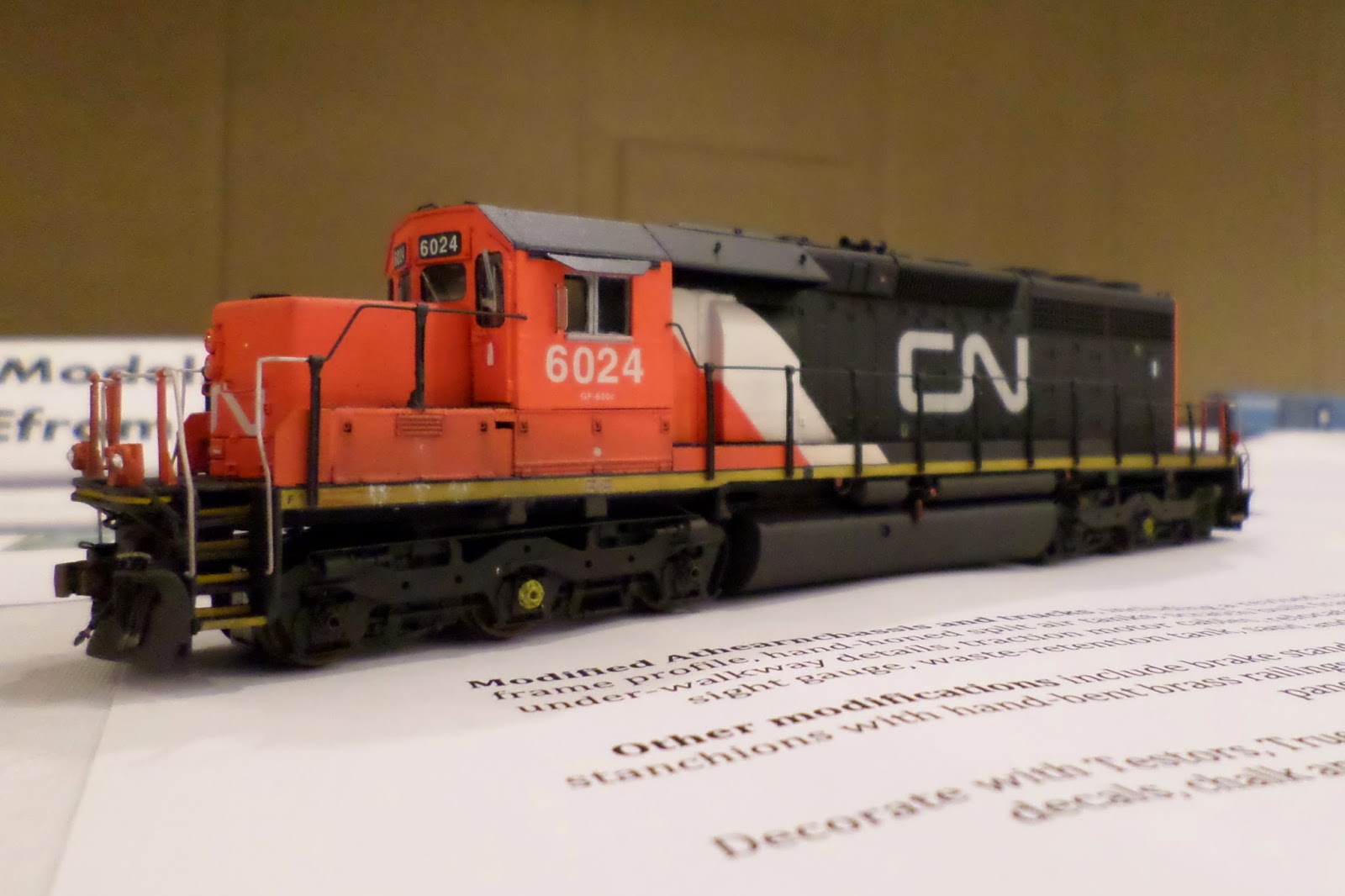 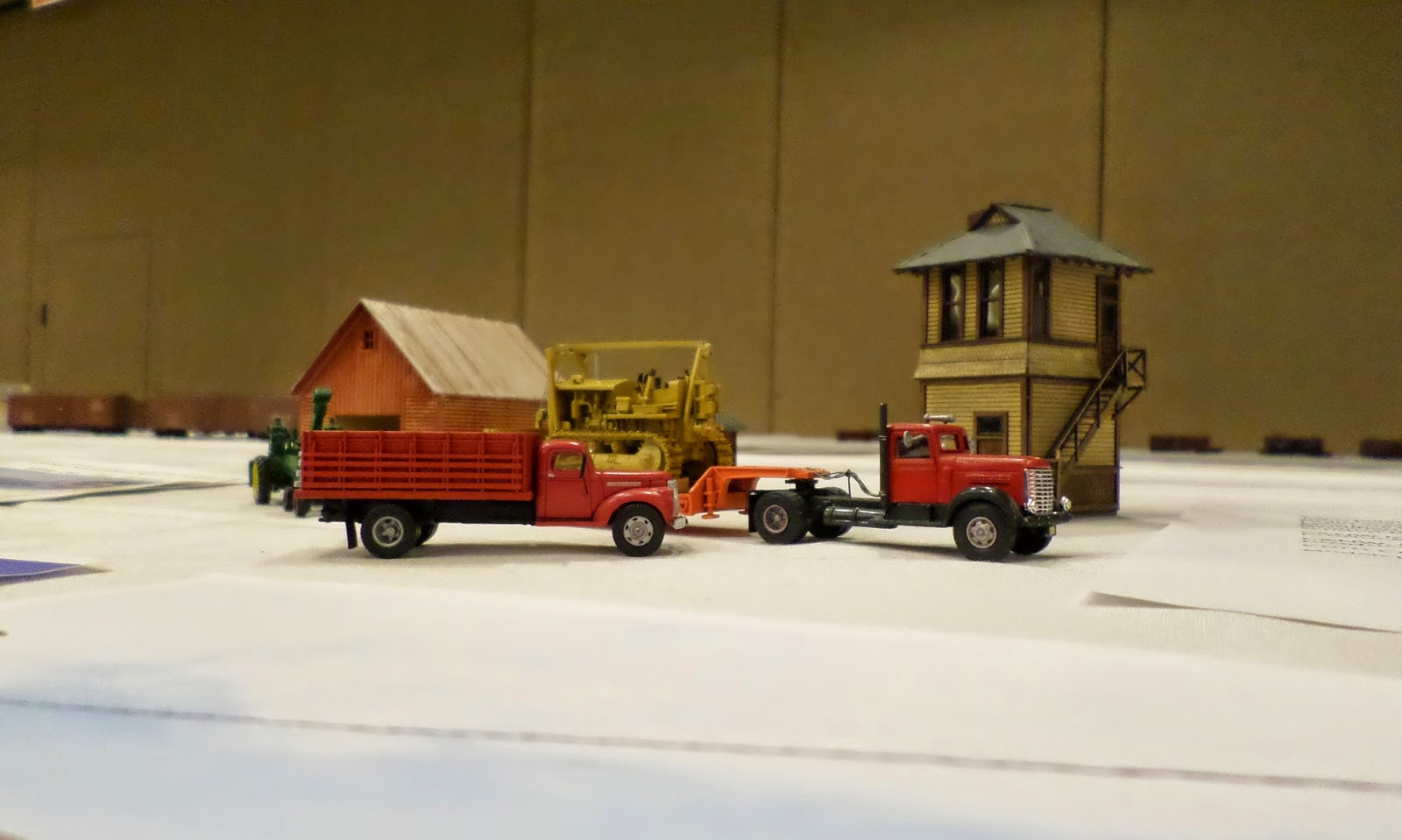 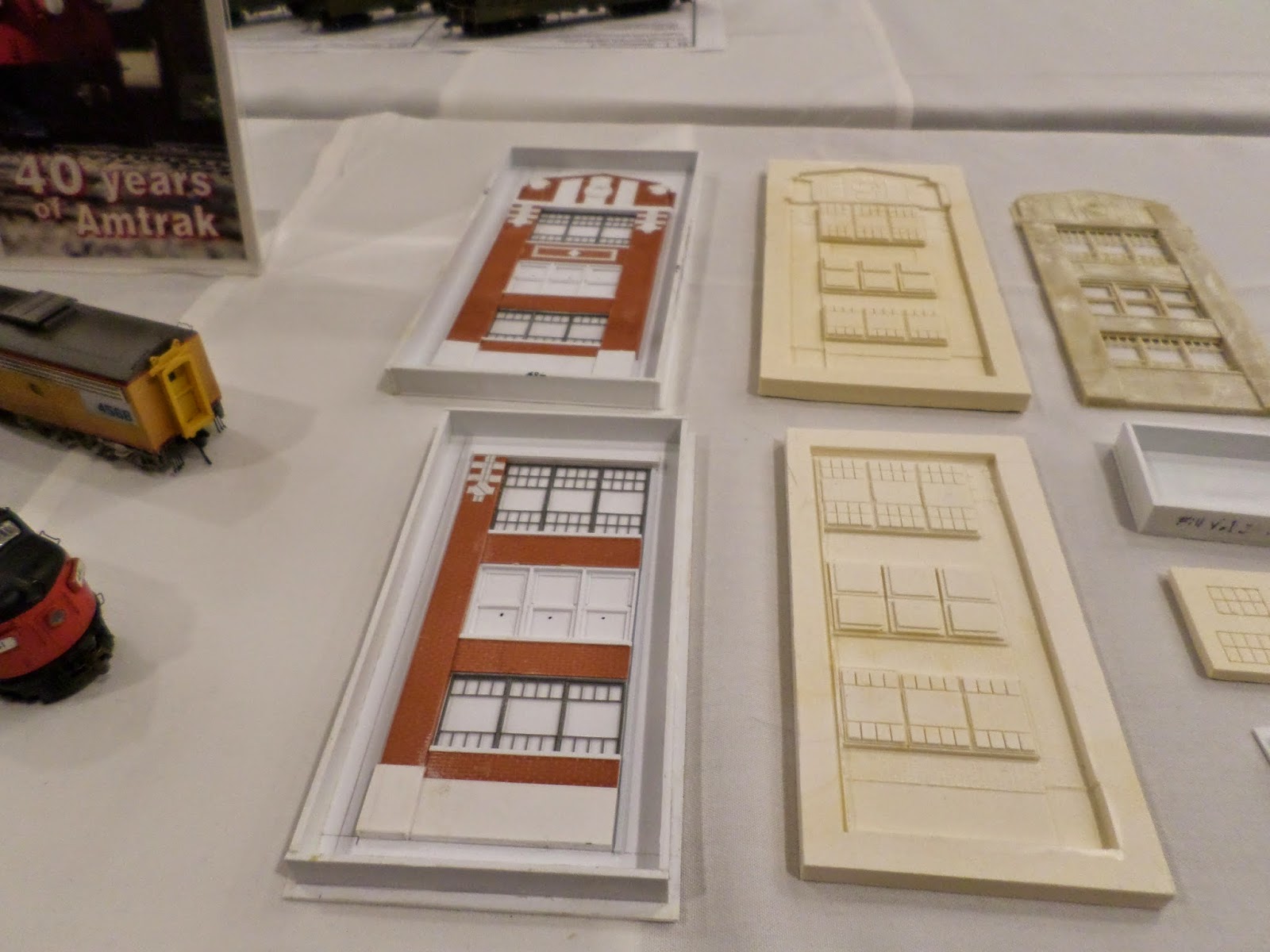 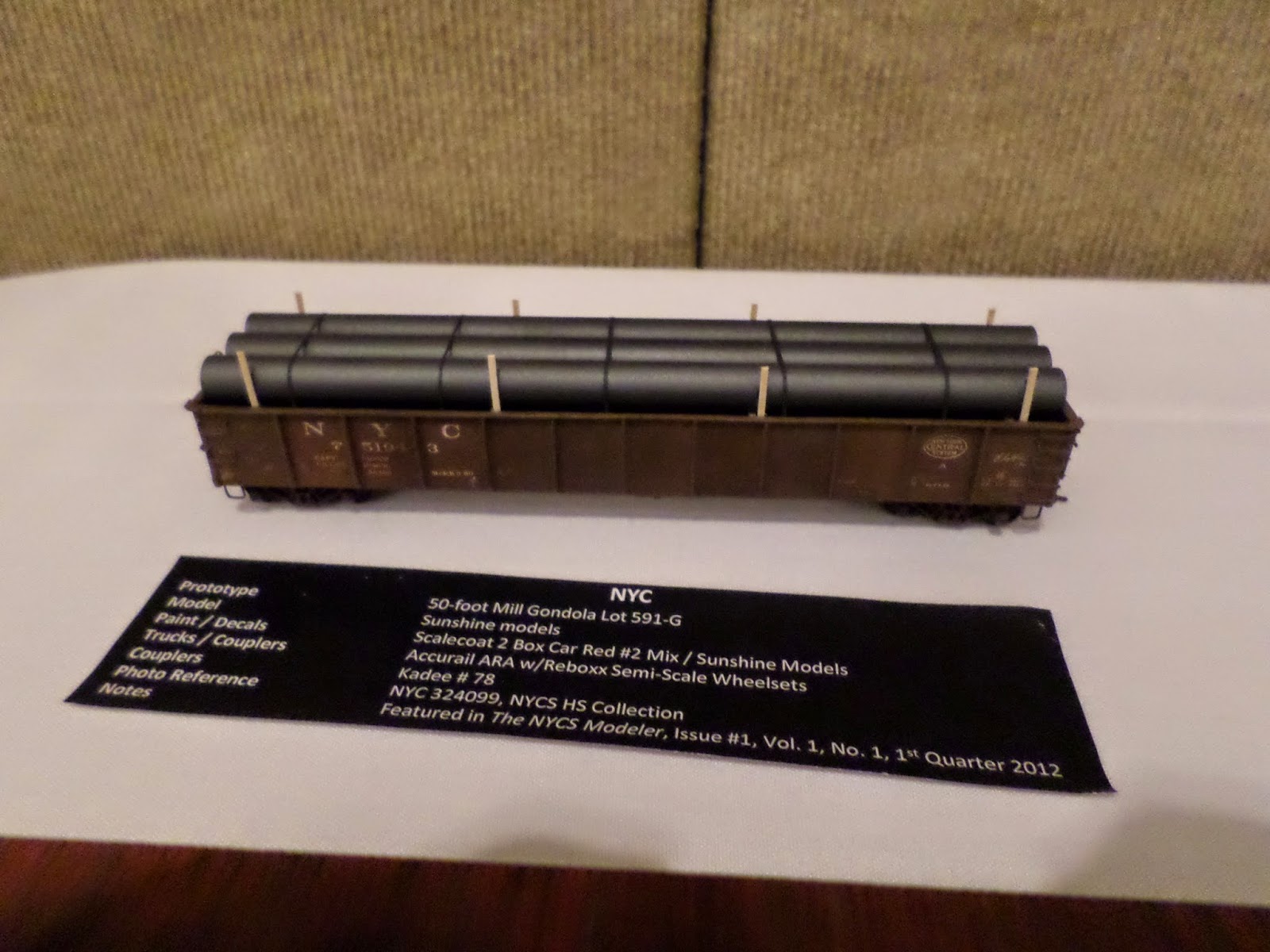 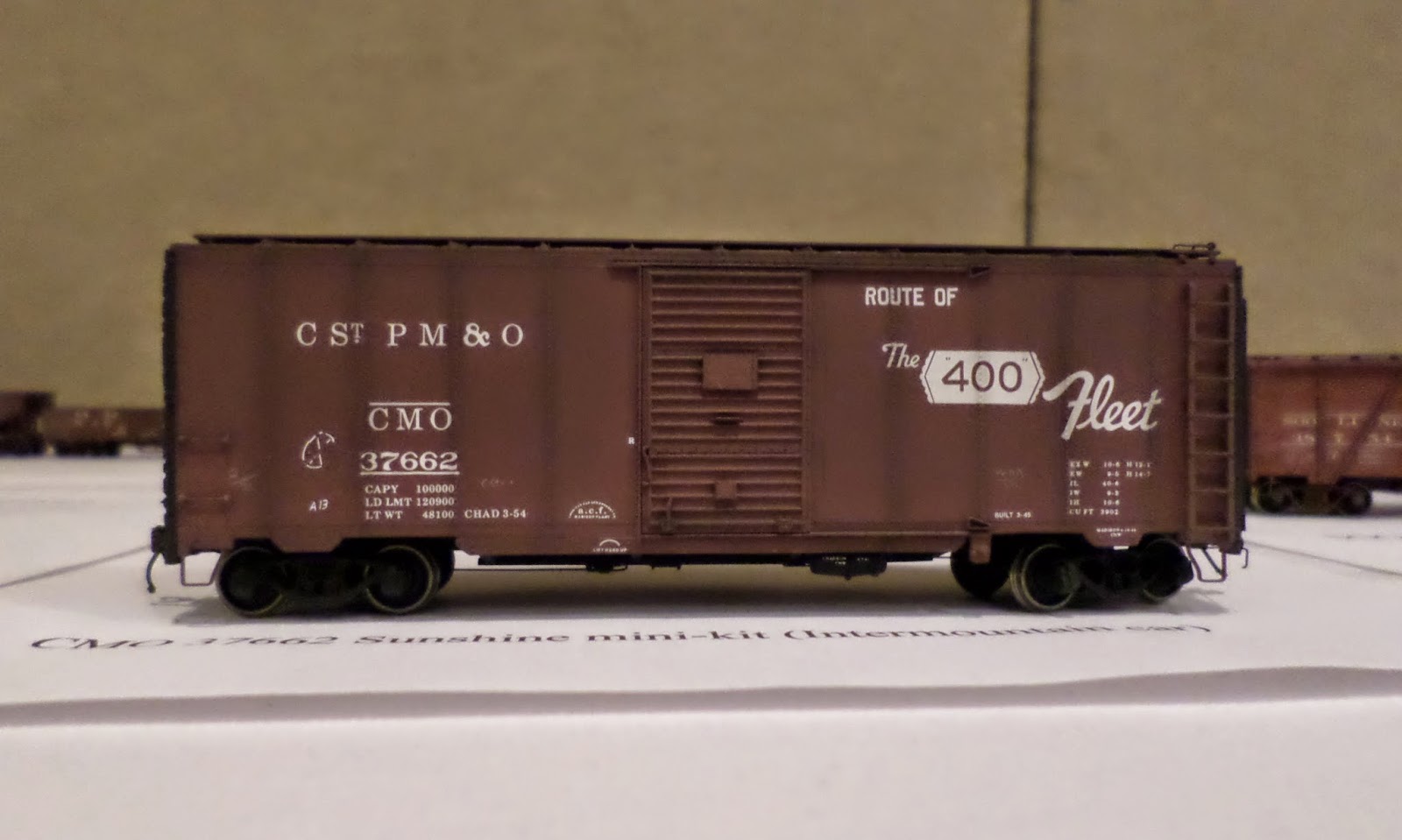 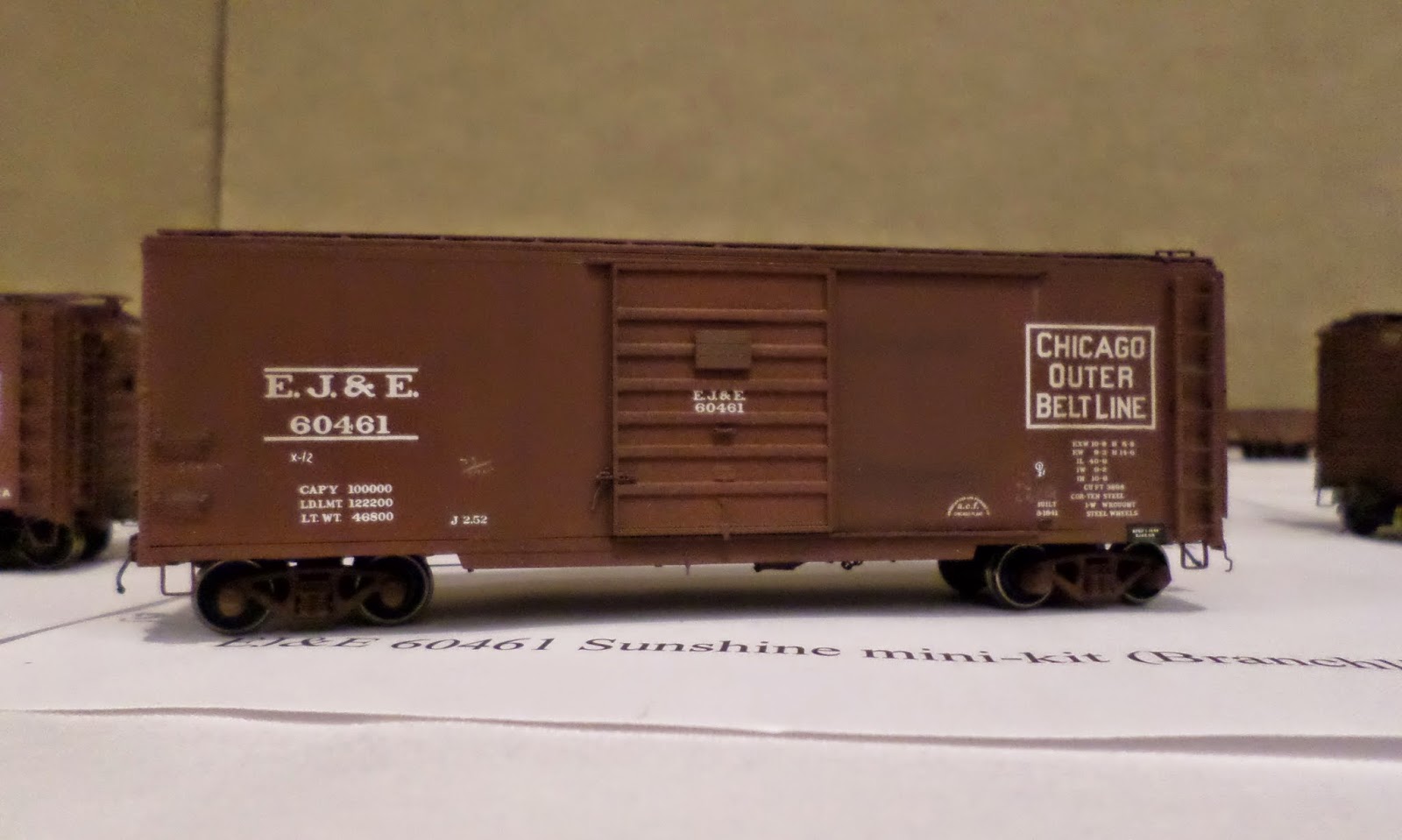 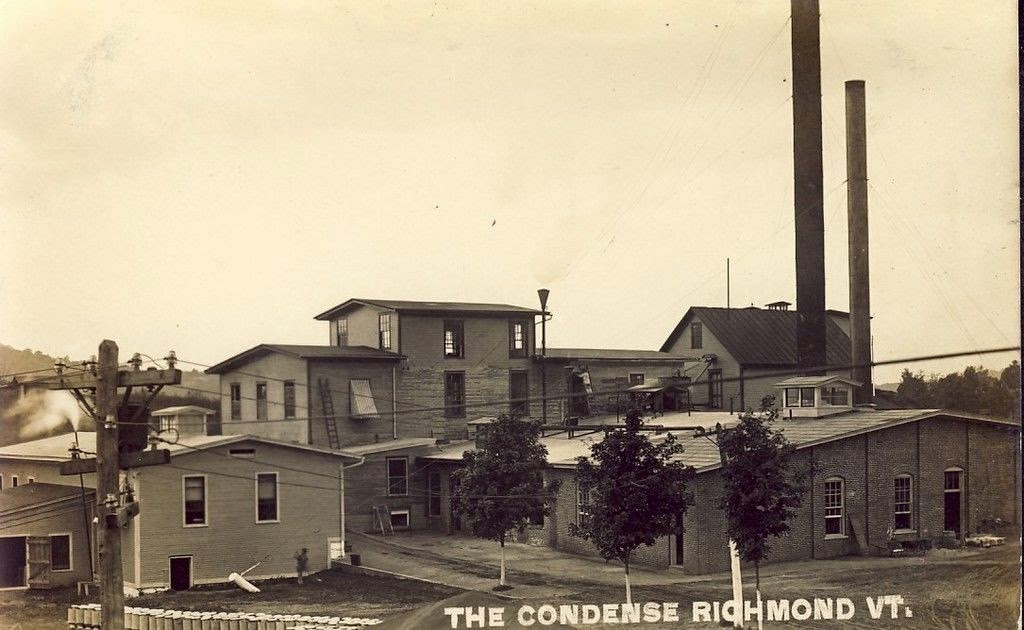 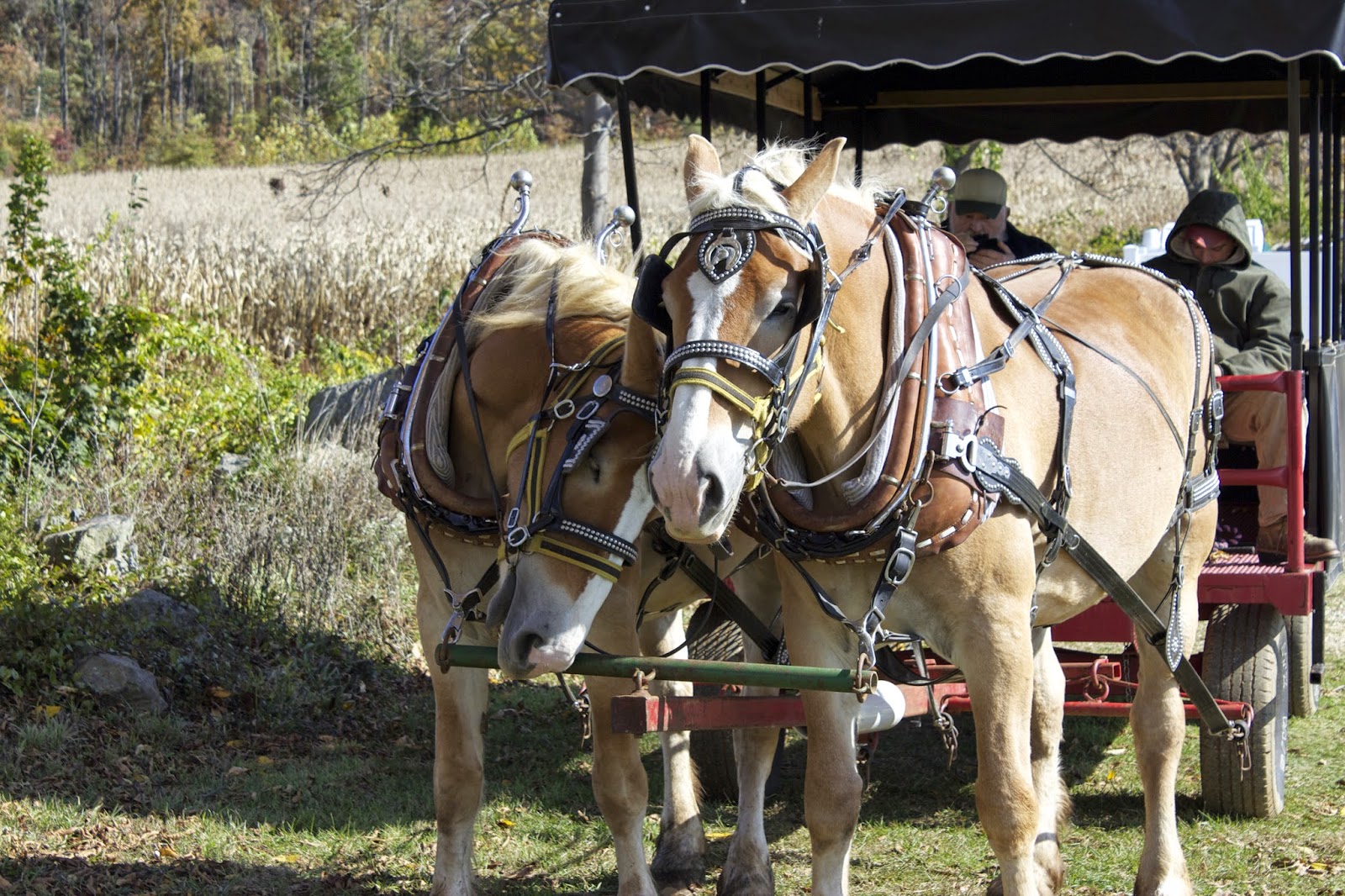