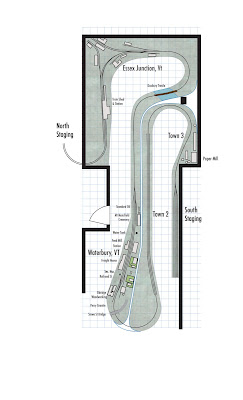 Currently, the basement looks like a bomb hit it - demo and/or reconstruction of model railroads is never pretty to look at, but I'm hopeful that like a Phoenix the new railroad will arise from the ashes "new and improved."

Seems appropriate to kick off this new blog with a look at the design for the revised layout. The footprint is similar in some ways to the existing layout, although there's no helix, and the peninsula connects to the around the wall portion of the layout at the opposite end of the room, relative to the former arrangement.

Here's a track plan showing the planned new layout arrangement. Note: This plan doesn't show all the details of every structure, siding, etc . . . and, I've deliberately left some "Towns" undetermined since I need to do some more research to narrow down the field.

Initial test posting to my new blog covering my HO scale layout inspired by the Central Vermont Railway
Posted by CVSNE at 7:04:00 PM No comments: