The inspiration for this scene is the prototype photo I bought from Bob's Photos a few years ago. Russ Greene at New England Brownstone used the photo to create his plaster abutment kits. The bridges are Micro-Engineering 50-foot deck girders. I wanted to have the river look more like a clear New England stream than a Midwestern or Appalachian muddy river (although this week I know plenty of rivers in Vermont look plenty muddy and murky . . .). 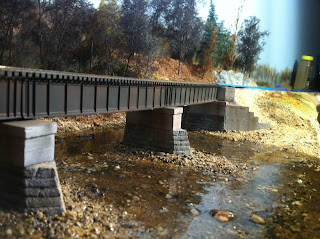 The sub-base of the river is 1/4" Masonite painted black and covered with a combination of sifted sand, gravel, and Scenic Express "River Bed" gravel. I left some of the black-painted Masonite showing between the rocks to represent deeper areas. I applied a coat of Envirotex, let it set up completely, then painted some tan riverbanks and some green/black areas on top of the Envirotex - again, not covering the surface completely. Once that dried I added a second layer of Envirotex. Since the Envirotex leaves a perfectly flat surface, I've been adding several coats of Min Wax Polycrylic Polyurethene. I think at this point I'm at six coats, and it's just starting to "bubble" a little - which is a bad thing on furniture (MinWax warns against too many coats) since the resulting surface looks rippled and a little like waves. 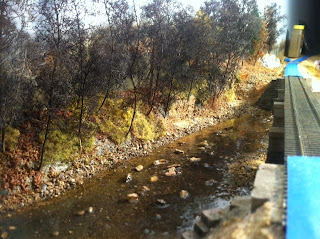 I still need to finish this up obviously (the blue tape on the track should be a hint). Still to come:
1. A few more coats of MinWax
2. There are one or two of the background Supertrees that look a little too wavy from the side - they will be replaced with some with straighter trunks.
3. Foliage, undergrowth etc . . . around the base of the piers
4. Adding some electrostatic grass to the embankments
5. The harvested field with the corn shocks (the field is not visible in these model shots)
6. And, obviously, a coat of paint on the fascia. 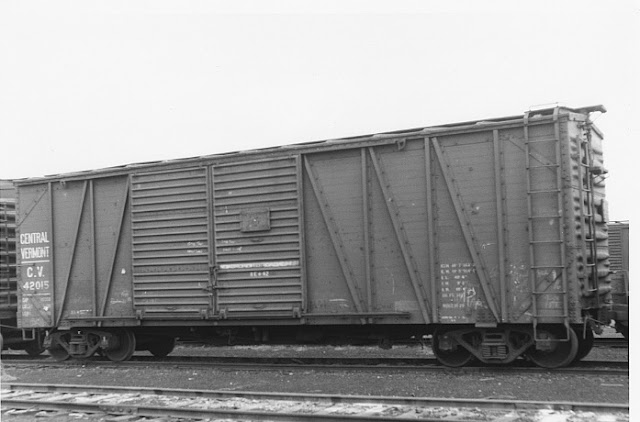 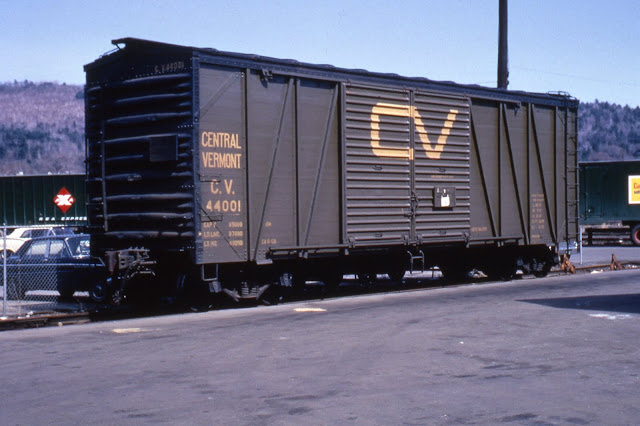 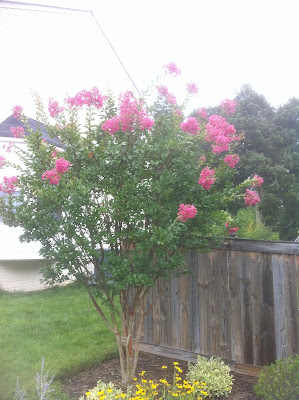 Here's a closeup of the bloom. When these die off they have to cut from the tree. It's one fall gardening chore I actually like doing! 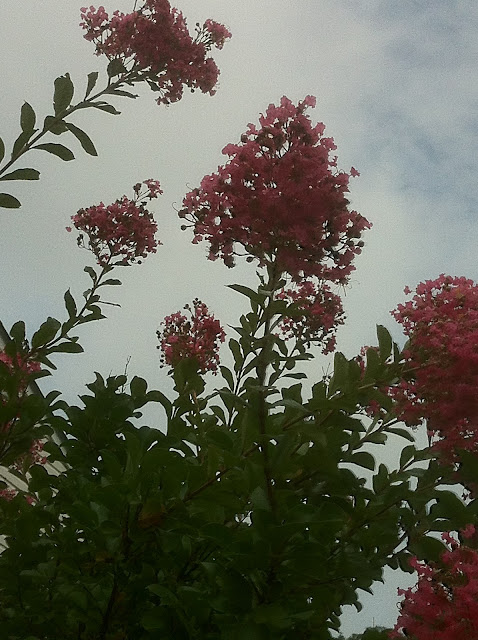 I want to work on some scenery - for a change of pace from track and wiring and also to have a place to pose some "finished" photos, especially around my bridge scene. The problem was I didn't have any foreground trees. So I decided my "weeknight" project - for those times when I had a few minutes in the evening - would be to build up some leafless deciduous trees.
Last spring we had a bunch of landscaping done - and we ended up with several Crape Myrtle plants. These flower in the summer, one flower on the end of each branch, and the seed pods and flowers turn brown in the fall. To get the plant to flower again you really need to remove the seed heads from the plant. Here's one of the plants in the side yard - this was taken in late spring. 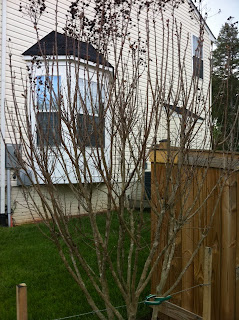 You can see the seed pods on the dried out bloom below - I kept these cuttings thinking they may make decent tree armatures. They do, but it takes a little bit of trimming. Of course, the seed pods have to be removed and the "droopy" ends of the branches need to be trimmed off as well. 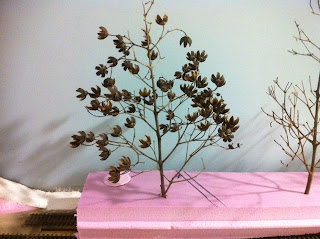 Here's the "stripped" armature - ready to have the finer branches added: 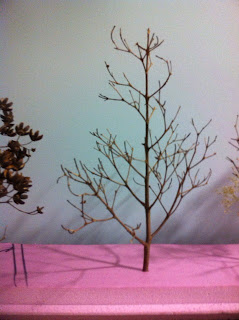 I used the pieces of the fine Super Trees sold by Scenic Express applied one at a time and secured in place with hot glue - much easier than the CA I used to use to build up trees. I always ended up with little bits of SuperTrees on my fingers!! 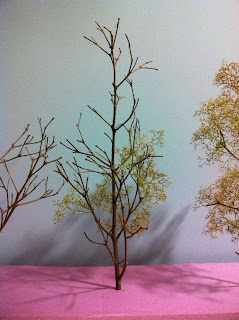 Here's a tree just about ready for the paint shop (I'll paint them primer gray with a dusting of "Camo Brown" on the ends) - On this one I also plan to remove that oddball branch on the bottom. 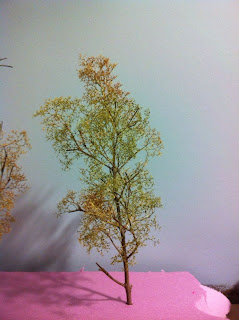 I don't plan to make forests of trees this way. This is strictly for foreground "specimen" trees. But I'm pleased with the way the Crepe Myrtle branches make the trunk and main branches look more robust and the Super Tree foliage adds the finer branch structure. I've made about a dozen of these in the last week of evenings - which should be more than enough to scenic the bridge scene. That's tomorrow's project.