Batting Clean Up - I

Batting Clean up. For those who aren't familiar with baseball, that's a baseball reference. Of course, with the way things have been going in the last four months, no one's been doing much batting, 'clean up' or otherwise!
We're all still healthy here, and hope all reading this are the same. I'm still on "max teleworking." For April and May all that commuting time I'd thought I'd be able to "convert" to hobby projects never really panned out. It seems like I just worked more hours every day. A couple of weeks ago things slowed down just enough to allow me to catch up on some hobby (and gardening) projects.
Instead of starting (yet) another modeling project, I opted to focus whatever extra hobby time I had on finishing up some half completed (half started?) projects.

Structure Bases
When I scrapped my old layout before we moved I did my best to carefully remove the structures and packed them so they wouldn't be damaged. For the most part I was successful, but I really think I got lucky. One thing I'm trying this time around is placing each structure on its own base. The dimensions of these bases (I'm using Gatorboard) is determined by the structure's dimensions plus a buffer. At this point I've got about a dozen structures installed on scenic bases. A couple of these are shown below.
Of course, Threshers Mill needs a mill pond and falls, so once I'd determined where it would go on the layout I made an extra large base for it. 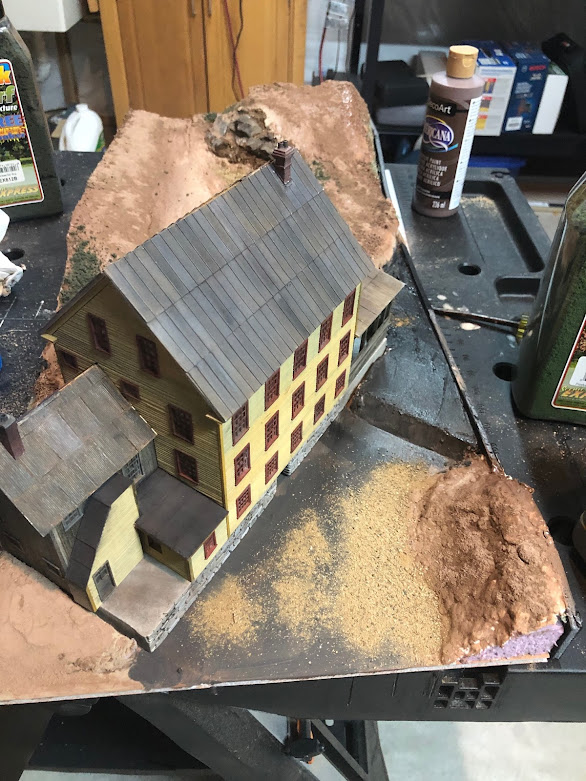 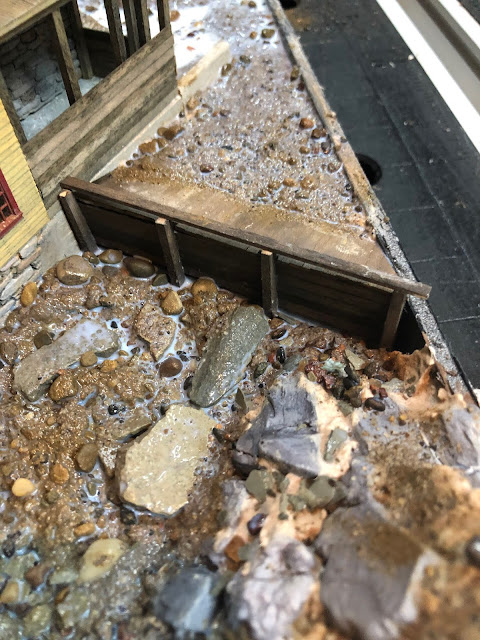 This old Branchline Creamery dates back to the first Southern New England layout and needed some repairs before it got installed on it's own base. I plan to replace this one "someday" - but for now it will serve as a nice placeholder. 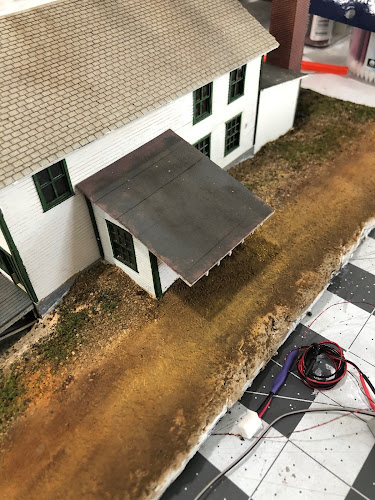 And ... Let There Be Light (Sometimes)
You may have noticed the wires under the creamery base in the photo above. I've been retrofitting LED lighting in several of the structures as I place them on bases. The two main requirements to determine is a structure gets lighting are:
(1) How logical is the lighting for that building and, most important;
(2) How easy is it to add lighting?
In some cases, it's not possible without risking extensive damage. I'll have more thoughts on lighting in a future blog post.
And Finally, For Now
I have some other Batting Clean Up projects to share - but here's another before we close out this chapter. The photo below shows blending the roadbed into the surrounding terrain.But that's not the real point of the image. 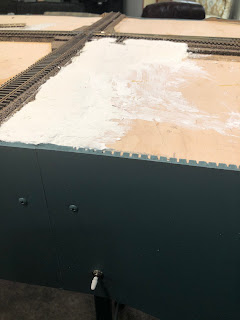 The real point is the toggle switch on the fascia. After several layouts where I used hand thrown turnouts I've opted to return to powering the turnouts with Tortoise switch motors on this layout. To that end I've got the entire outer "loop" powered at this point. This is one of those projects I really have to be in the mood to do. I'll get on a roll and install four motors in an evening. Then I don't want to look at a Tortoise for a week. But slow and steady wins the race.... Get it? Tortoise? Slow and steady??
"I'm here all week folks....!!"
.