I've discussed some of the frustrations I have with the main yard scene on the layout in previous posts.
Bob Sprague, who's had a number of layout designs published in MR over the years, came by a few months ago and after we reviewed the list of what was bothering me (outlined in more detail below) he prepared this drawing showing a possible solution. This drawing shows the "main peninsula" exactly as it exists. Changes to the main peninsula are off the table. 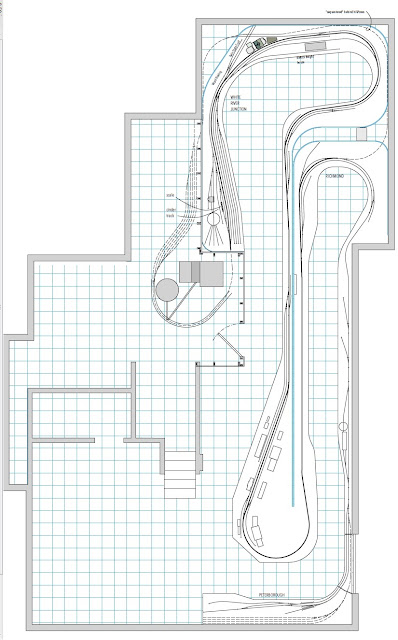 The top wall and left side walls (relative to the drawing above) basically the location of the main yard does not reflect the current state of the railroad. At this point the station "wye" scene (not actually a complete wye) is where the turntable is shown on this plan - the turntable is in the upper left hand corner.The south-end staging yard is currently on a stub-ended shelf that juts into the middle of the furnace room. This drawing shows a revision to the staging yard that wraps the line around the furnace and creates a double-ended fiddle yard on one end.The other change on this plan from what's in the basement presently is the right side of the room (relative to the drawing) - currently the north end staging yard is along that wall - I'd like to move that from the wall to another location. Pluses to the current arrangement:
1. Current arrangement represents the "prototype" orientation of White River Jct. - from the north you go through the CV yard, past the engine terminal and then arrive at the station.

Cons to the current arrangement:
1. The station in its current location is kind of hidden - the proposed plan would make the station - a signature scene - the first thing you see when you walk down the main aisle.2. The current location of the turntable is too far from the aisle to effectively work as the "hostler" and there's no room for the roundhouse - which means this section of the layout languishes simply because I can't figure out how to make it work. And frankly we never seem to use the turntable during an op session.

In essence the main issue is the station is a "curved scene" - the curve in front of the station is a longtime favorite of prototype railfans - and the same north yard is an inherently straight scene - (on the prototype it's arrow straight for a couple of miles).
Naturally, I ended up with the "straight" scene in the corner - meaning the yard has a 90-degree bend in the middle.

There is one "con" to the proposed new arrangement - actually two:
1. I'd have to scrap what I have and rebuild the thing
2. The orientation of the elements in WRJ don't match the prototype - you'd pass the station before arriving at the yard from the north - exactly the opposite of what really happens.

But, although the orientation will be reversed from the prototype the arrangement in the "new" plan has the yard and engine terminal in a "straight" part of the layout and the station in the corner.... I've been toying back and forth with these plans for several months - thought it was time to share it with the world and see what the reaction is.

I gave you some feedback, so we will see what everyone else says.

Looks like a much more user-friendly setup! And I like the fact that the station would be more in focus.

Interesting re-design. There’s a lot to like, but the prospect of another round of major surgery has to be daunting! Thanks for sharing and thanks for the blog as a whole. (I’m a long-time lurker - first time commenter.) FWIW, it seems to me that you’ve given the “correct” way a real try and clearly aren’t happy with it and don’t seem to be maximizing all the cool terminal functions that you could get out of the WRJ area. I can see why you’re tempted to give this design or some variation thereof a try... Good luck! - Todd Hermann

Todd, Thanks for commenting. Yes, the possibility of (yet another) big rebuild is "daunting" - what I would do, if this comes to pass, is to build the "new yard" as a series of sections (Free Mo like modules?) before removing the current yard. Only when the "new" yard is built would the old one be removed and the new sections installed in its place.

Hi Tore,
Yes, that's "Plus #1" for considering this - having the station be front and center when viewing the layout.

Marty, as long as we're considering heresy: since the big "con" to the proposed arrangement is the north/south orientation, what if you corrected the orientation as drawn and instead of trains leaving the station heading north to Waterbury they were headed south through Claremont Jct. and Bellows Falls?

I appreciate this is MAJOR surgery (mentally, if not physically), but what is laid out as Waterbury could become Windsor, VT, and Richmond Claremont Jct. Operationally, this would give you interchange traffic with the Claremont & Concord, and all the BM and CP traffic you could ask for.