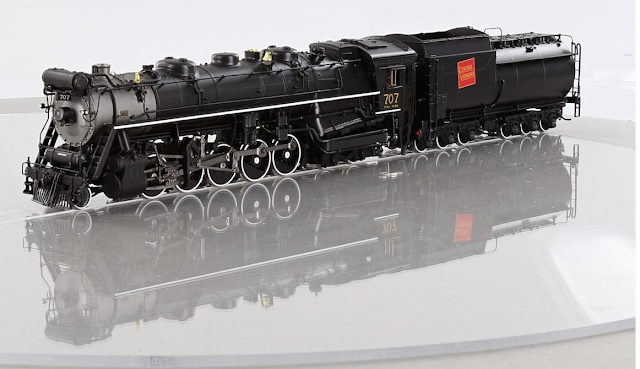 As I was talking through the possibilities of a "mainline" layout design with Bernie Kempinski at lunch the other day I mentioned that one requirement of any mainline layout would be the ability to run this thing. This "thing" is a Central Vermont T-3-a class 2-10-4 imported by Division Point about a decade ago.
I was so enamored with it that I sold my two "old school" PFM 2-10-4s. Yes, this model is more accurate than the PFM model, but honestly if I'd known how much of curve hog these engines were going to be I would have kept my PFM models and lived with the compromises.
I was going to use the money  to purchase this model when my bride surprised me with one as an anniversary present.
Since that day I occasionally get asked if I'm going to run my "nice" engine.
When asked how it runs I also answer honestly - it runs great... in a straight line.
Curves are a real challenge with this thing.
A combination of flanged driving wheels, long wheelbase, outside frame on the trailing truck that has components tucked inside the ashpan, not to mention the full diaphragm between the locomotive and tender and you have a recipe for a curve hog of immense proportions.
I've actually never been able to determine this things real minimum radius (the importer claimed something like 30" or some such!) - on the old layout it would almost get around a 34" radius curve - the drivers would normally lift about halfway through the curve and the trailing truck was truly hanging up.
For the track plan we're sketching I'm assuming that 48" curves should work. I have place in the apartment to test the engine on a curved section of track.
That all leads to the reason for this post - does anyone have experience getting one of these beasts successfully around a curve?
And if so, what radius?

Hi Marty: I had one at one time. My layout minimum mainline radius is 36” and it wouldn’t go around that. I managed to solve the trailing truck shorting issue but drivers still lifted on the curves. I called DVP and he asked if it was a true 36” radius curve, whatever that meant. He stated they prided themselves in accurate models but I guess models that don’t work on curves. There is just no play in the drivers or blind driver to compensate for the long wheel base. I eventually traded it for a DVP CN 4-6-2 which also had its own demons. It has now left the building also. I know others with the same issues. To get back to your question, you might get away with 48” but who knows. Stick to 2-8-0’s and geeps....Don

Why not lay some flex track on a temporary base and see what it will go round?

Terry,
Perfectly reasonable suggestion - and normally it's exactly what I would do. Only problem is our current living situation precludes setting up a temporary base as there isn't enough room to swing the proverbial cat* - let alone a large radius HO test track.

*"Swinging the proverbial (or any other kind) of cat does not, in any way, condone animal abuse. While I'm more certainly a dog person I don't hate cats - don't trust them much as they always seem to be plotting the overthrow of the free world - but I don't hate them...

Barry,
That's the basic idea behind the conceptual layout design we were toying with. A large layout, no doubt, but extremely simple, high scenery to track ratio, and a chance to run the larger engines.
We are working with a 48" minimum at this point but I certainly wouldn't start building anything without conducting sufficient tests to demonstrate that the 2-10-4s (and 4-8-2s, also curve hogs...) would perform on such curves.
If they don't I'll revert to another possibility, or as Don suggested, stick to GP9s and 2-8-0s!

Don, Thanks - I was remembering your misadventures with the 2-10-4 (didn't know about the 4-6-2!) but was hoping you might have concluded what a minimum radius might be.
Sounds like something between 37" and ?? is the answer. I'm not entirely convinced this thing will get around any curve....

Marty, big engines look good on big curves but like Don I also stick with 2-8-0s and four wheel diesels. Of course my curves are about 28-30" radius so considerably smaller although they handle my IC E6 and 85' coaches well.
I am with on the cats...always been a dog man.

Barry,
I plan to stick with such very broad curves even if I limit the steam to 2-8-0s. Let's say the 2-10-4 will get around a 48" radius (which I have space for) - great! I'll stick with the theme for the layout that can incorporate such beasts into the scheme.
But in this theoretical example, if 2-10-4s show they require say, 60" radius (which I don't have room for!), I'll rethink the layout theme to something more 2-8-0/four-axle diesel centric - say, Palmer to Millers Falls, and perhaps drop the curve radius down to 44" - still plenty generous but something that would offer just a little more aisle space if necessary.
Frankly, the Richford branch theme layout was using 36" and 38" radius curves.
Again, while we're building the house I have the luxury of engaging in such machinations. I don't plan to make any final decisions until well after we've moved in.

A yard of track on a window sill might be sufficient to indicate what sort of curvature gives the engine trouble - it does not have to be a full circle. That simple test could establish what sort of radius or alternative engineering needed.

I don't know if it's super-relevant, Marty, but the NMRA does have an RP for curvature. These engines have a 22' wheelbase over the drivers, which would put them in the 32" range, assuming the wheels have the standard back-to-back. It sounds, however, like you should include the trailing truck in the rigid wheelbase, which probably makes them at least 28' (the longest in the spec), and the NMRA RP indicates 40" minimum. That sounds to be in line with Don Janes's experience.

The specific theory that underlies this is the versine formula. There is an explanation here: https://pwayblog.com/2016/05/09/the-versine-formulae/, and we had one in the Proto:87 Journal, back in the 90's but that is no longer available online as it was a PDF only and I've since taken it down. Let me know if you'd like me to dig it out.

Good luck! It would be great to see a big steam layout.

Is it possible the machine just needs a little breaking in and loosening up? If I sat on a shelf for a decade I imagine I wouldn't go around tight corners either. :)

Hi Colin,
While I'm sure the mechanism would benefit from some run time, I don't really think that's the overarching problem here. The locomotive runs fine... turning, well, that's not so good....!!!! Marty

Thanks Rene, the NMRA RP does seem to validate the 42"+ minimum these engines require -
although the full height diaphragm between the engine and tender is also adding something to that minimum along with the rigid wheelbase.
My guess is these things will need all of at least 48" to "look right." I will not editorialize on the state of the current crop of brass models except to say the PFM models of the same prototype had no issues with 30" curves. Of course they were different models from a different time when the mindset was one of building brass engines to run, not merely create box or shelf queen collectibles. Marty

Hi Marty:
I don't have an answer for you about curve radii, unfortunately. But I did want to comment that I like your line of thinking about designing the new layout to support this 700 series locomotive. The broad curves required may be a "minimum" for a 2-10-4... but where they will really shine will be when you enjoy watching a 2-8-0 haul a string of 40-foot boxcars around these curves, and realize just how realistic that looks compared to a 30" curve!
I've written on my own blog about how if I had 50% more space for my layout, I'd fill it by extending the single-track mainline run between towns, and by broadening the curves.
Layout designers often talk about "minimums" - the tightest curve, the sharpest frog, etc. - yet I wonder what our layouts would look like if we talked instead about "maximums"?
- Trevor (Port Rowan in 1:64)
PS: I have a lovely S scale CNR 2-10-2 with enclosed deck plate between engine and tender, which goes around a 40" radius. The diaphragm is designed to slide back and forth on the front face of the tender as the locomotive goes around a corner. It works really well. Not sure if you're ready to brass-bash your CV 2-10-4, though - the better option, I think, is to broaden the curves until it can negotiate them, then add at least 10%.

I came across this discussion and apologize if you already figured it out. Since you are in an apartment why not build two or three foam board modules big enough to test the engine and set them up on the floor for a few hours so you can sort out what radius you need?
I was in a similar situation and was able to get permission from the wife to take over the living room floor on Saturday mornings.