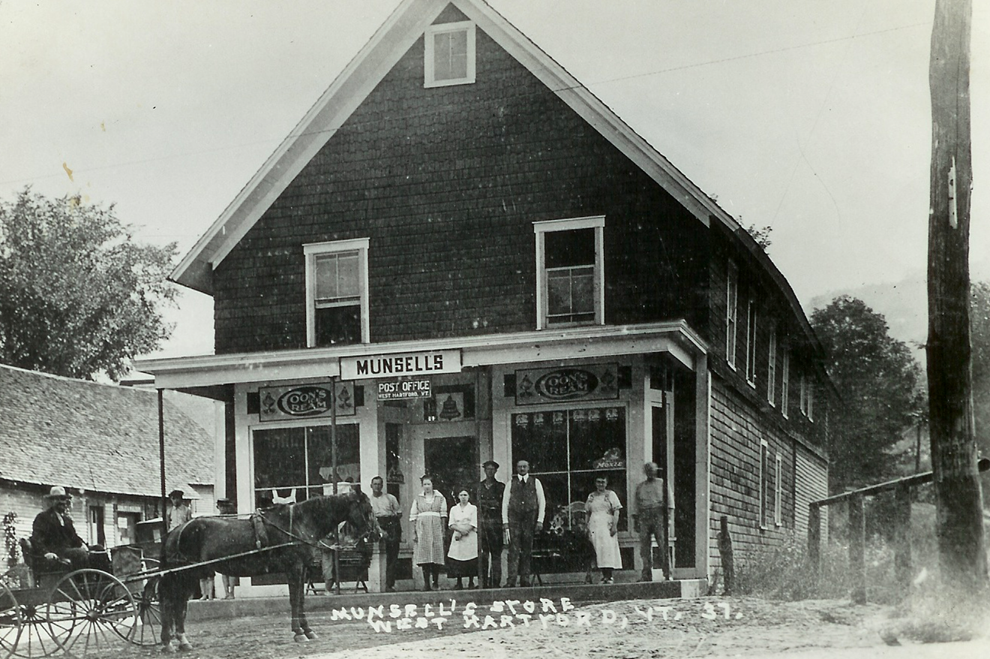 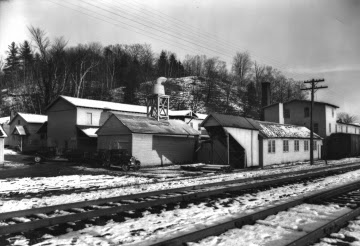 "We're taking on water" is a routine operation on a steam locomotive....on a ship the phrase can have a much different "intensity." In a house, well it's a precursor to a long night of scrambling to keep everything that isn't yet wet dry, cleaning up the water, pitching the unsalvagable, and then figuring out where the water came from in the first place.
We've been in this house almost six years and through some heavy rain storms, hurricanes, and the like we've never had a drop - not even a puddle - of water in the basement....it had gotten to the point where I turn on the sump pump every month or so just to make sure it's still there.
Last night I went into the utility room to start setting up my new "toys" when I heard a "Squish" as I walked across the floor. Looking down I could see a large section of the floor was wet. I have two shelves in that room where I store some of Christine's blank artists canvases - and my stash of unbuilt resin car kits. The stuff on the top shelf was soaked. The instant I noticed this I heard a yell from the powder room directly above where I was standing "Honey, the floor is soaked!"
I really don't know what the source of the water is, or was, although I suspect it's the supply line into the toilet or sink in that bathroom. I've turned the water off to both of them and will investigate further this afternoon.
Damage to the unbuilt kits could have been much, much worse. I wasn't concerned about the resin parts, since they're pretty immune to water. Decals, on the hand, are another matter.
Some of them are unsalvagable, the rest are sitting away from the soaked kit boxes and (hopefully) will dry out and still be usable.
What a mess. 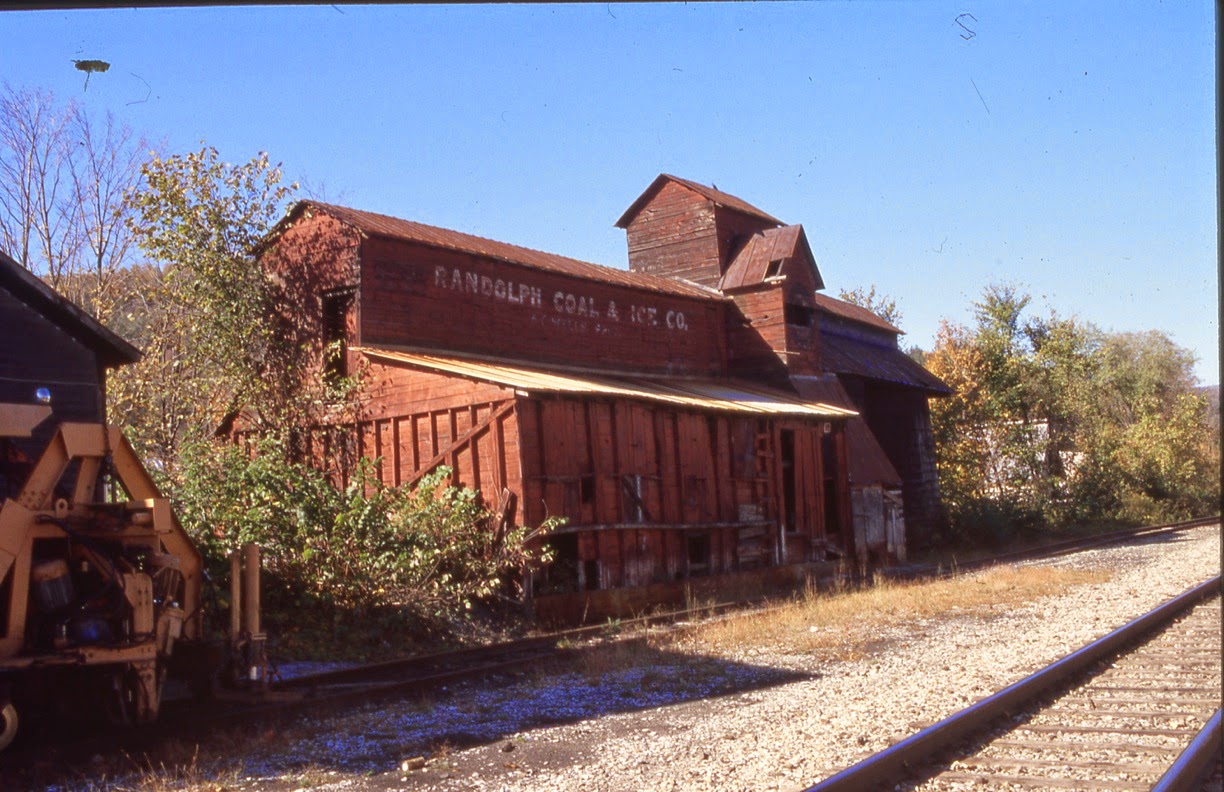 John Hajnosz made a comment on the last Wordless Wednesday asking if the coal dealer in Randolph was still standing. As far as I can tell it still is.

I was paging through Google maps today looking for some street views for the towns I'm modeling on the layout. I sawWaterbury now has a street view so I "walk" over the station, and pan to where the CV Freight house is...

or was.
Obviously from the foliage on the trees, this was taken sometime last summer.
No matter that this is "yesterday's news" - the lesson remains clear - get those pictures now as tomorrow that pet structure may well look like this. 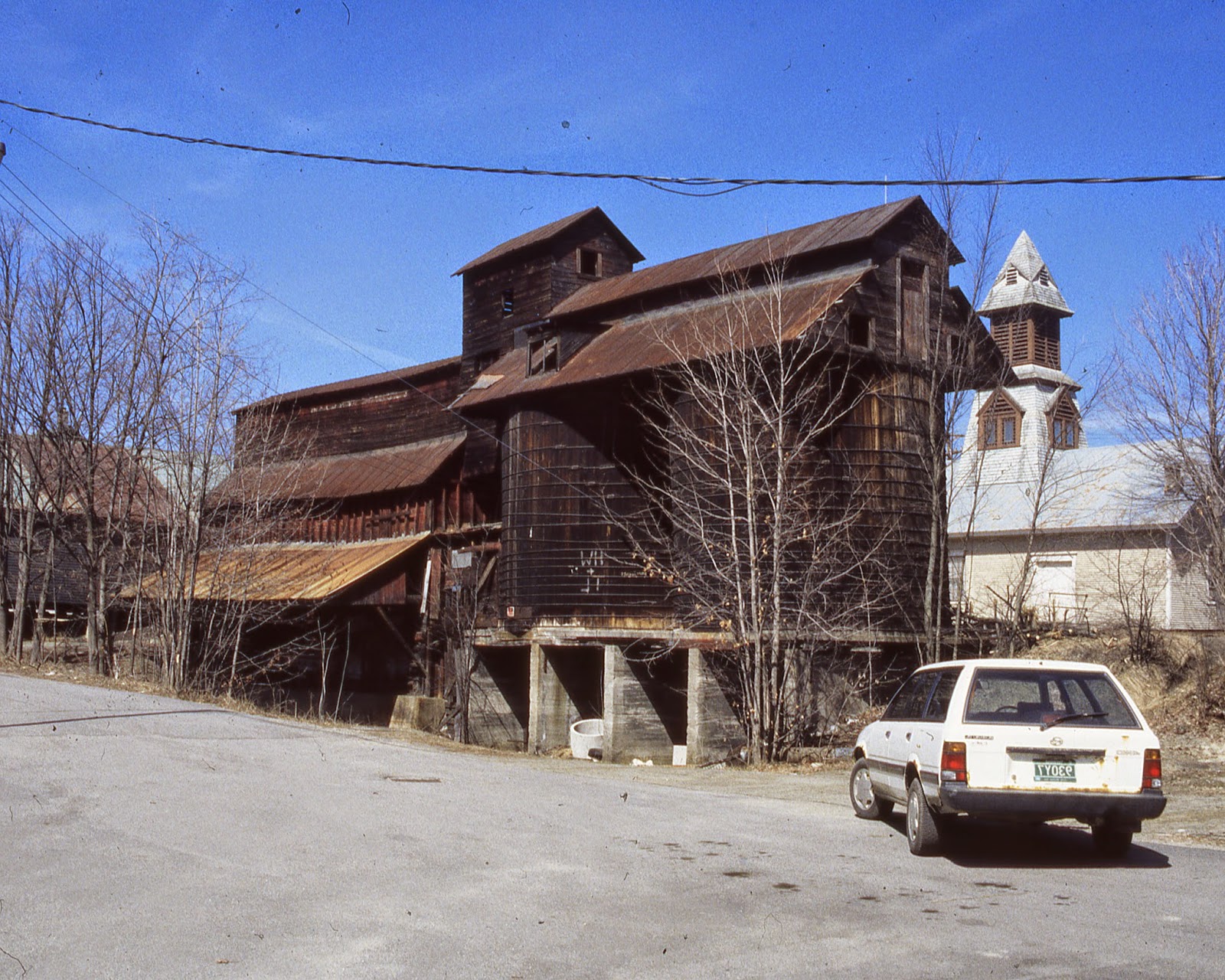 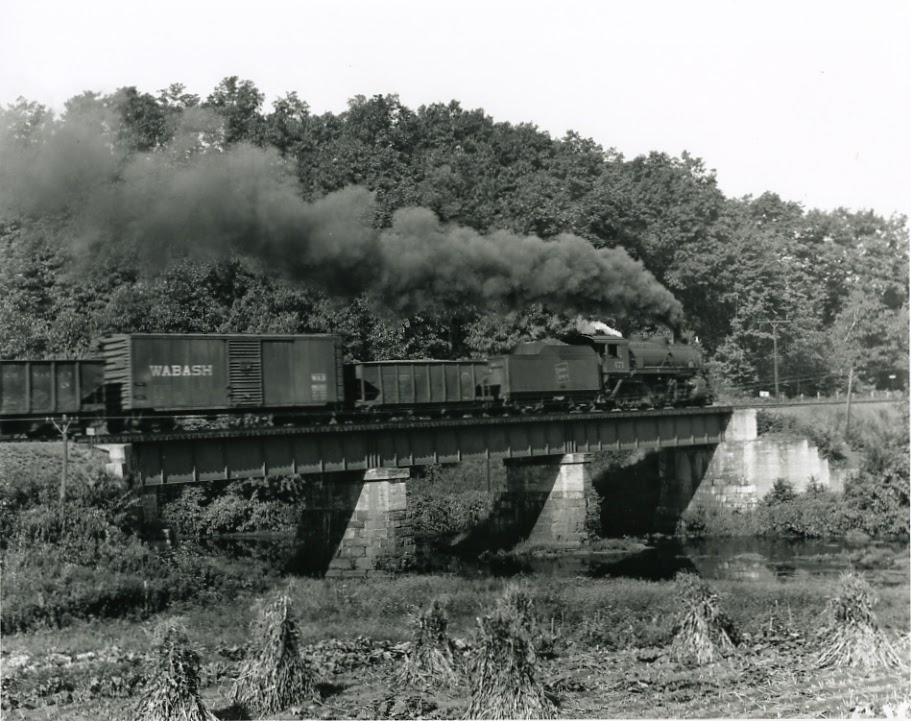 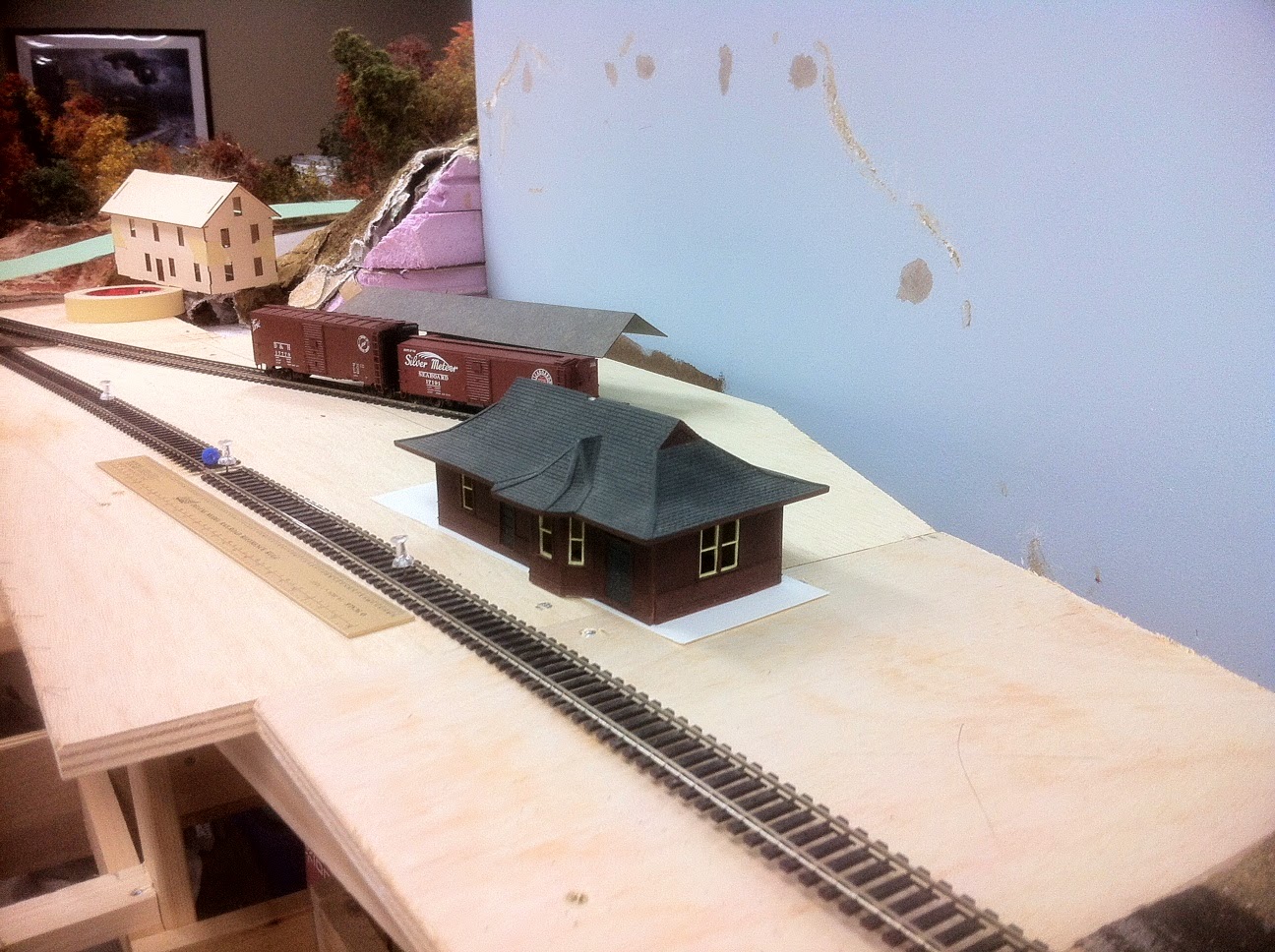 - I'm sure the readers of this blog are getting plenty sick of seeing pictures of raw benchwork and the somewhat endless look at construction and reconstruction. I know I'm sick of looking at it! Hopefully this Williams Creek relocation project is the last of the "deconstruction" and we can do nothing but move forward! -
I got the plywood sub roadbed installed on Sunday afternoon. Since then I've been playing with various arrangements for the Williams Creek scene. The Williams Creek project really includes the bridge scene and river itself as well the mainline on either side of the bridge – a total of about 17 feet of single track mainline. I've played around a lot with this section of the layout for several years, and I found it the least satisfying area on the entire railroad both visually and operationally.
I  considered all kinds of possibilities ranging from a large water-powered mill complex, to a small town, to a large “destination industry” like a paper mill or plywood plant. I’ve arranged, and rearranged structures and track so many different ways I’ve lost track.
In the end, the answer became clear – simpler is better – “Less is More” as some of my friends are fond of saying.
The photos above show where I am at this point, a country lane coming down the hill with a Greek Revival country store (red with white trim). There’s a small frame station - preferably a CN/GT/CV standard design (frame because every other station on the layout is brick). The station is well-weathered and even somewhat neglected in my 1954 era. Perhaps the bridge and building gang use the baggage section for storage of tools. There's still an operator stationed here, but the office is only open for a few hours a day.
Behind the station a single spur comes off the main at an angle and services a small - very small “industry.” Perhaps a small freight house - or the freight house that's been leased by a local lumber company. Or maybe a team track that’s currently being used by the State Highway department to receive road-building materials. Perhaps it’s used to store MofW cars. In any event, it’s going to be something very simple.

Bill Schamburg said it more poetically:
“There is a need for counterpoint on a layout unless you are in a Jackson Pollock mode. The natural and built landscapes exist in an organized manner. Leave breathing room, cluster things, create "high visual elements," and remember that human activity is often nodal, then provide visual relief. After all, why do city folks go for "a ride in the country?" (And, country mice have been known to head for the city for a weekend.) Some call it negative space, but it it has a positive influence on the impact and realism of a model RR, be it prototype-specific or a derivation.”

So while the structures in this scene – the general store, bridge, and old depot, will be interesting there’s going to be a lot of other elements needed to create a realistic scene. Telegraph poles, fence posts, the agents automobile parked next to the station, track details like joint bars and switchstands, the variations in ground textures, grasses, and specific trees are the elements I’ll be focused on here. Taken by themselves they aren’t that noticeable. When combined they should produce something special. And it should be fun. And lest you think I made this scene up out of whole cloth, here’s the prototype photo that provided more than a little inspiration for this scene: 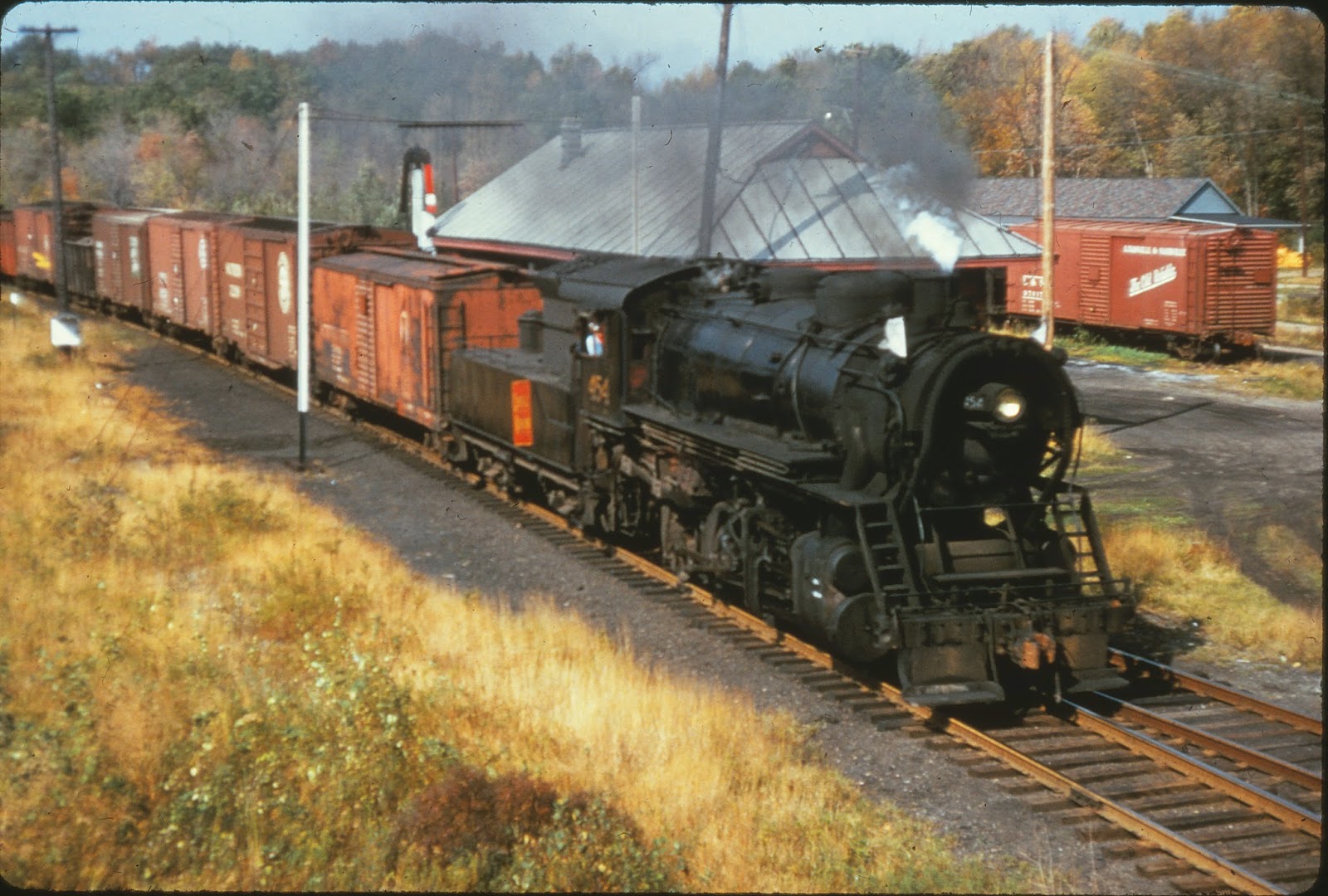