As originally planned, Stafford Mills (essentially my freelanced version of Sheldon Springs) was the location of a major single industry - in this case a paper mill complex located at the end of a dedicated stub peninsula. But as I built the layout I realized there would be room for a siding with one or two very small industries at opposite the junction switch on the passing siding (the junction switch with the mill lead forks off from the mainline).

In this case I didn't have to remove anything so this wasn't so much a "rework" as it was an addition or an enhancement. I could even make the argument this didn't add any additional track to the layout since I'd removed a turnout and a siding from the junction area as part of the rework of that trackage I described a few months ago.

I was out of Micro Engineering no. 6 code 70 turnouts - as is everyone else. So I decided to handlay the necessary turnout. Although this added a couple of evenings to the project I'm glad I did - the turnout works perfectly, and cars and locomotives (even brass steam locomotives!) pass through both routes without so much as a click! I'm not wishing any additional work on myself, but if any of the Micro Engineering turnouts on the rest of the railroad fail or prove troublesome I'm simply going to replace them with handlaid ones.

The buildings shown in the photos are strictly placeholders and may, or may not, end up in these locations permanently. I kind of like the idea of a station in between the mill lead and mainline, so that will likely stay (I may build a different station for the spot. The one shown is a model of the Richmond, Vermont station - although that perhaps the closest to a "standard" CV small depot design as the railroad had. But there are a couple of Grand Trunk (NEL) stations I've always liked and may well scratchbuild one of those for this spot. 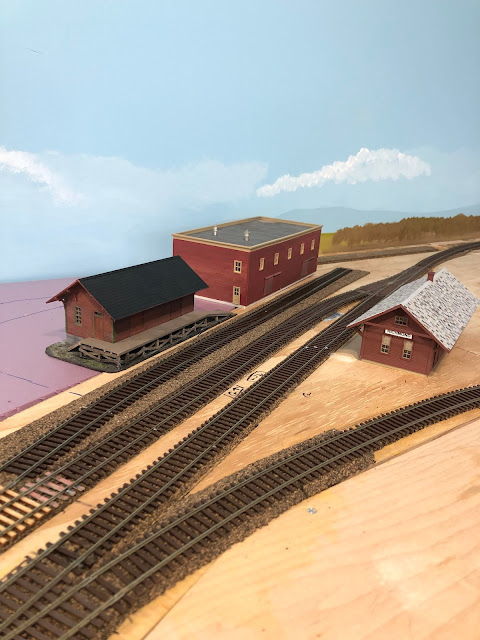 The freighthouse is a Walthers cheapo model that I painted and lettered in "close enough" CV colors. It's not bad .... but the weakest point is the platform - despite my best efforts it's still too bulky. I should have replaced it with a scratchbuilt wood one. I do have a BEST Trains kit that may work better in this spot, if I decide to stick with the freight house. 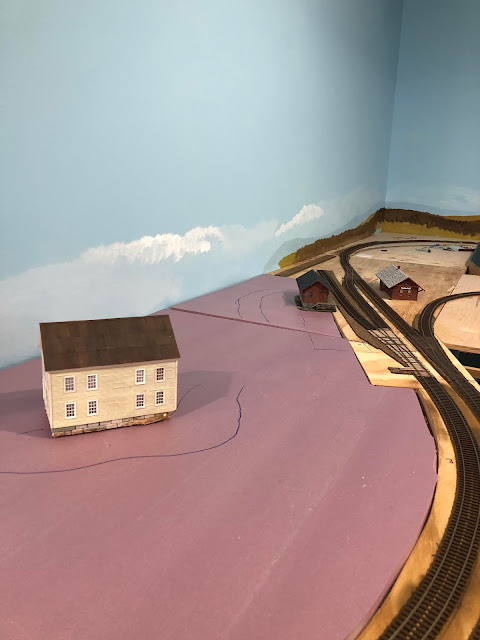 My ultimate plan for the area with inside the mainline curve (with the yellow building) is to ultimately have a mill river with one or two larger wooden mill structures over a mill stream, complete with mill falls, etc. ... But that sounds like it may take months/years to get completed. This may well simply end up as some open fields and a tree line "for now" to get a large portion of the landscape to look finished with the idea I could revisit it at some future point.

Have you changed the trackwork (The branch from the main) into Sheldon Jct/Stafford Mills?

No changes.
When I laid out the benchwork I saw I had room to angle the track from the wall, so that's what I did. The original track plan had the track running parallel to the wall on the left in these photos.