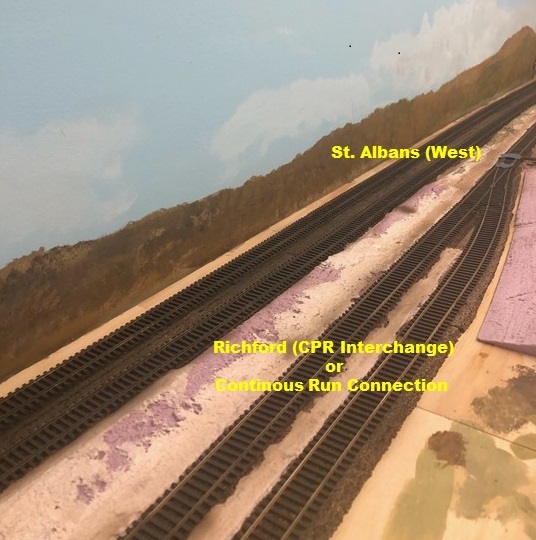 Over the last few evenings I've completed the basic landforms for the area where trains will emerge from the staging tracks onto the scenicked portion of the layout. As mentioned previously, the staging tracks aren't hidden from view (since hidden from view in this case would also mean "difficult to access"!). They will, however, be screened from view by a low rise in the ground, and perhaps trees and bushes. At the point where the staging tracks emerge from hiding trains will round a bend and appear from behind a more dense stand of trees. At least that's the plan. We'll see how effective it is in practice.

Some questions and comments indicate a little bit of confusion with what exactly is going on in this corner of the layout. Really, it may seem complicated or confusing but when you see it in person it makes perfect sense.

I will try to clear this up with a couple of labeled photos.

A few months back I described how I added a couple of new staging tracks to the layout. There are actually two stub-ended "screened" tracks along the right hand (short) wall if you view the track plan in the Richford Branch layout description tab above.

These represent the originating point of the Richford Branch in St. Albans, Vermont. These are labeled St. Albans (west) in the image above. As you can see in the photo above there are two other double-ended siding tracks visible in the foreground. These tracks serve a dual purpose. First of all, their primary function is to represent the interchange connection with the CPR in Richford at the other end of the branch. But since these two tracks are double-ended they could also provide additional "surge" staging capacity for another train originating in St. Albans. And their third, and perhaps most important function, at least to me, is to provide a continuous run connection. 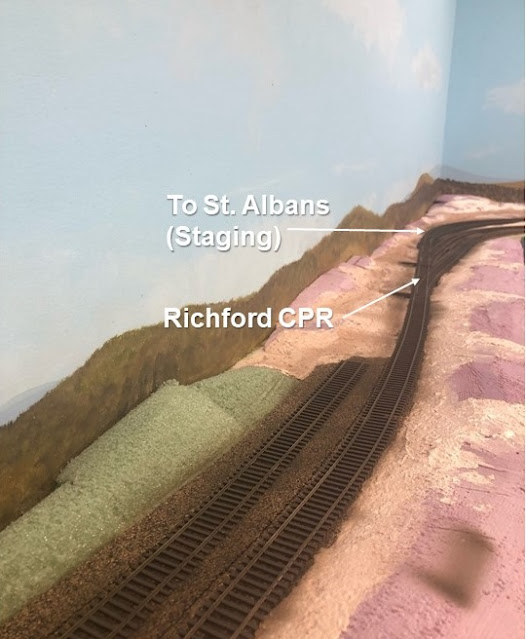 The second photo shows the other end of the staging yard. This is the point where trains coming from St. Albans will first appear "on scene." This photo also shows the other end of those double ended Richford CPR interchange tracks. I've built up the basic landforms out of foam board and florist foam to create a scene with a slight slope to the foreground between the track and aisle and a slight hillside between the track and wall. I'm hoping this will prove to be a good place for "roster shots" of rolling stock.

Since all this "staging" is really integrated into the rest of the layout visually my intention is to scenic it, ballast the track, etc...

To the casual observer it will just look like a few more tracks - perhaps with a train or cut of cars spotted on it - but won't be a visually jarring distraction from the rest of the layout.

Hope that clears things up!

Hi Marty,
Could you kindly contact me via email on rene@proto87.org regarding the Railway Modellers' Meet of British Columbia?
Many thanks
Rene Gourley