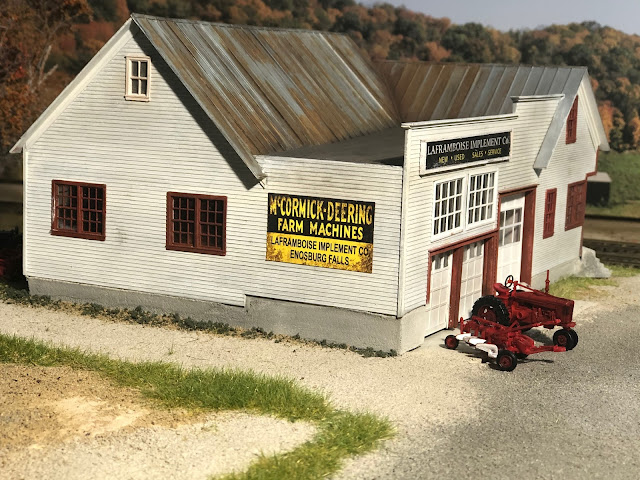 Progress continues in the basement, but some limited summertime activities and a distraction (more on that below) have kept me away from any long duration model railroad work sessions.

I did, however, manage to get the implement dealer completed, mostly in preparation for a clinic I'm called "Researching and Scratchbuilding Tips for Prototype Structures" at an online RPM meet later today. I wanted to finish the building for the clinic, which I did, but the bigger challenge was taking what was a long clinic (last time I presented this live it ran 55 minutes), adding more information to it, and then editing it down to fit the 30 minute time slot. I think I'm in good shape - but I did remove some of the "here's two or three ways you can do this step" - limiting the talk to what I actually did.

We'll see how that works out. I'm doing the same clinic for our local NMRA division later in the year (October, as I recall). So at least I'll get one more use out of it. I think the idea of 30 minute clinic slots is particularly good - frankly I think it should be used when (or if) we get back to having live meets and conventions. I've sat through a lot of clinics over the years that would have benefitted from some harsh editing!

On to the main topic for today's post. When I built the implement dealer I added a poured concrete foundation made from .040" plain sheet styrene. I did sand the surface of the styrene prior to painting in order to get it to look like something other than smooth plastic. I painted it and thought it looked okay - until I took some test photos of the building, Those foundation walls were missing any texture. 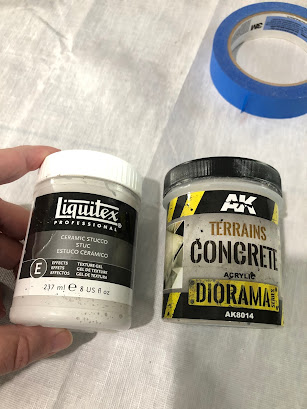 I have AK Interactive's Concrete (they make an identical material for asphalt, the only difference is the color). It's basically some sort of joint compound-like stuff with a gritty texture added. And, while the texture is great for larger scales, or even HO scale pavement if you apply it carefully and smooth it well - it's really meant for larger scales such as 1/32nd military models and the like. In HO it looks just a little too chunky to make a convincing concrete wall. 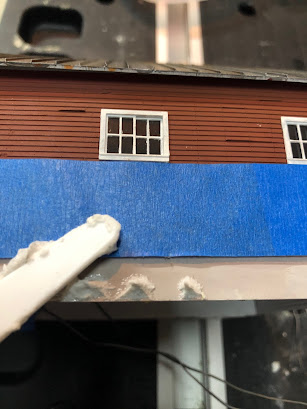 I showed the AK Interactive stuff to my wife (leaving out how much I'd paid for a tiny tub of this stuff!) and explained the chunky problem. She dug through her art supplies and handed me acontainer of "Ceramic Stucco Medium" - basically matte gel medium with some fine, gritty material added. The difference was this gritty material was much finer than the AK Interactive stuff.

After I taped off the clapboard sections of the walls to avoid any overspill, I dabbed this stuff right out of the jar (you can thin it and color it with acrylic paints, in fact that's what it's made for) along the base of the styrene. In this case, I didn't color it, or even paint it. It dries to nice "almost new" concrete color out of the jar. It has a decent working time - so I had lots of time to spread it smooth with an artists spatula. 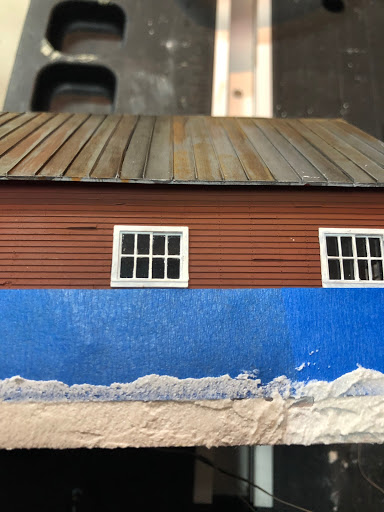 I found it naturally formed some uneven spots in various places - looking exactly like a poured concrete wall. If you were modeling a stucco building you could easily use this to create a look of failing stucco with the underlying brick showing through. Or, if you wanted it to look like patched concrete you could let an initial application dry, and then add a second partial coat in a different color. 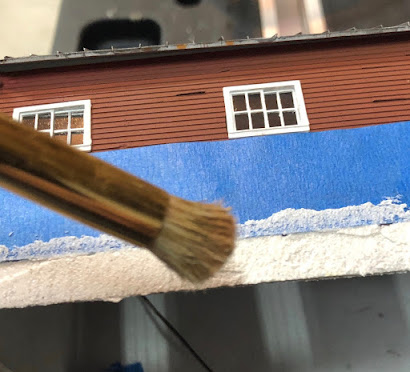 Before the next step I suggest letting it dry completely - preferably 24 hours or so. When it dried it looked just a little too heavy - but some light sanding to just knock the surface down, followed by a couple of applications of Pan Pastels gave some variation to the color and helped smooth the surface just a little. One more tip - if you're going to color it add the paint to the material before you apply it. I don't think "surface painting" this after it's dried would be as effective.

All in all I'm pretty pleased with the final result: 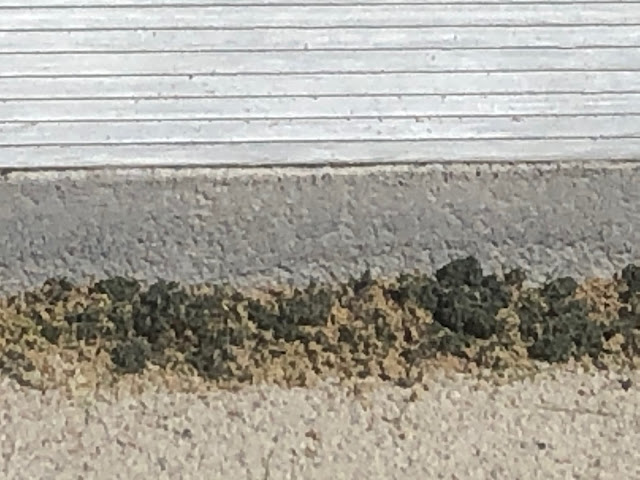 About that distraction - over the last couple of weeks of evenings I've been painting some 28mm Revolutionary War (American War of Independence to any Brits out there!) figures. Years ago I was heavily into wargaming - even did some re-enacting way, way back when. I was never into "winning" war games - but I did always enjoy researching the uniforms and painting figures to represent them. I haven't done any miniature figure painting for many, many, years - but out of the blue a few weeks ago I dug out a couple of old boxes of figures and decided to paint them. I quickly found I'm really out of practice.

But here's a very much in progress shot of a British Regiment - the various figures shown are representative of the Center (also called Line, or "Hat"), Grenadier, and Light Companies of His Majesty's 63rd Regiment of Foot. 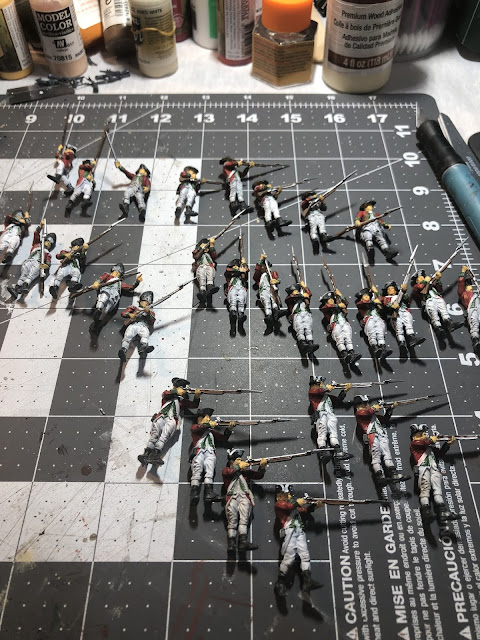 Thank you for your step by step clinic on concrete creation. I’ve been holding off on 2 freight house loading platforms waiting for a good formula for concrete.

Joe,
No problem.
I had to stop by Michaels this morning and noted they have the Liquidtex brand Ceramic Stucco mixture in stock.
Good luck!

Nice job on the concrete.

I'm going to try it on a pad for the machine shop.
Looks with a little sanding it will work just fine.

I am starting this week on a building with a concrete foundation, so your post couldn't have been more timely. Thanks!