I haven't been able to turn up a lot of detail on the Derby & Ball Co., but have found a few interesting facts that I'm including here in the hope that more information may reveal itself.
Derby and Ball is an example of a manufacturing company that changed with the times and adapted to new markets when their original product was no longer in demand. The company was founded by Albert Derby, one of the principals in a company called Frost, Derby & Co. The company started manufacturing scythe snaths in 1857. In 1882, Franklin P. Ball, who had been engaged in the manufacture of scythe snaths in Springfield, Vt. since 1852, joined the firm which was renamed Derby & Ball. The company had two locations - one was in Bellows Falls, the other in Waterbury. The Waterbury facility specialized in manufacturing the wooden (primarily willow) handles for the various scytes. 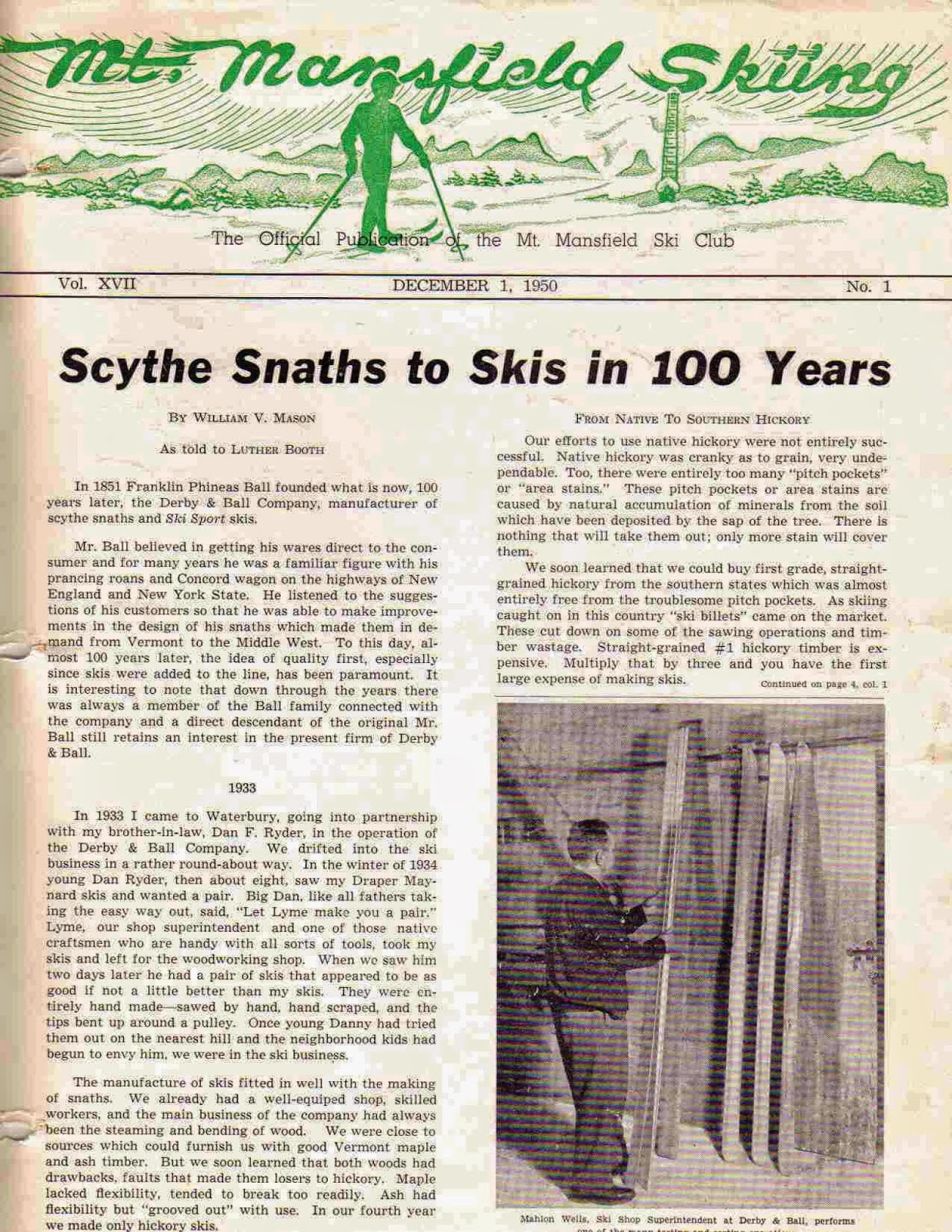 The company would last into the early 1960s but not as a manufacturer of scythes or even baseball bats. (The bats were only made for a few years before that business was sold to the makers of Louisville Slugger.) Recreational skiing started becoming popular in the years before WWII, and purely by accident the company started to make skis in 1934. A December 1950 newsletter of the Mt. Mansfield Ski Club explains the story behind how the company got involved in the ski business and explained how the skis were made.
Posted by CVSNE at 9:56:00 AM

Marty, Just letting you know that I have using your information and photo posts to build a slice of the Derby and Ball Co. You also mentioned the Mt Mansfield Trolley RR. I used a photo in one of Don Valentines magazines to build the trolley shed and lastly I also built the structure that was across the CV freight house just north of Waterbury station from the photo you posted from the Ambassador. Thanks again, JOHN

I'm actually the fellow that secured the scan of that catalog! Good to see that it came in handy for someone. The original is in a library, and they seem as rare as hen's teeth as the catalog itself directs the owner to destroy all previous copies of their catalogs! Derby & Ball may have used the railroads to ship their product, but the railroads were actually big *customers* of theirs. Post roughly 1920 or so the largest buyers of scythes and snaths were the railroads for maintaining their rights of way. This is part of the reason for so many scythe snaths in the post-1920 era being so heavy and thick. The clerks were doing the buying but relatively unskilled grunt workers were doing the labor. Since a well-made snath is a light and willowy thing not able to withstand much abuse (proper mowing is very low impact--slicing, not hacking) and would be prone to frequent destruction in untrained hands the clerks demanded heavy snaths that were difficult to break. They weren't doing the swinging, so they didn't much care if the tools were tiring to use! I have one snath by them that is so thick in the neck that I can't get my hand around it! However, the No.50 model was their most popular model and what I consider a good general-use snath. They still were a bit overbuilt because they were made for the general scythe-using public rather than the veteran mower, but were well made snaths and my favorite of the *commonly found* vintage scythe snaths.

Thank you for this informative post. Just got a beautiful old Derby and Ball scythe for Christmas so searching for the history.

I also have one, but I fear it lost its label.

That would have been the Dominion Snath Co., eh? If you have any history or artifacts to share I'd be very interested!

Hello, I did some research on the manufacturing of baseball bats made by Derby Ball & Edwards Corp., and the Derby Bat Corp. I found an article in a 1939 newspaper that the Derby Bat Corp. went out of business in 1938. I can't find anything in reference to "that business was sold to the makers of Louisville Slugger" Can you provide me with a reference to this information? Thank You Steven Keyman

Hello, I found the reference about Louisville slugger in a Jan, 13, 1933 newspaper and the story was retracted 3 days later as being "erroneously reported" Derby ball Edwards relocated the factory from Waterbury to Barre in 1933. J.A Hellerich, makers of Louisville Slugger purchased "personal property connected with the baseball bat business, and did not secure any patented process" I'm suspicious of the last part of that statement as this is the same time frame that Louisville Slugger patented their "Powerized" process for treating baseball bats. Thank you Steven KeyMan

How would you tell the model #? Is it imprinted on the scythe?

It was usually marked on a paper label, but some snath manufacturers imprinted it on the wood during certain time periods. The best way to ID them if a label is not present is by matching their hardware against other known, marked examples, or period documents that detail the model.

I have a Dominion Snath Co scythe, which my grandfather used on his farm in New Zealand (probably imported into New Zealand about 1920 or so). As a child in the 1950's and early 1960's, I used to watch him cutting the long grass at his house (he was retired by then). After he died I inherited his beloved scythe. Yesterday I got it out of storage as I want to clear the long grass from about an acre of inaccessible land. It's probably 65 years since the scythe has been used. The diamond-shaped paper label (#50) is in good shape, as is the snath wooden handle. The blade is badly rusted. But I've started on the process of de-rusting it and bringing that blade back from the dead.

In trolling through the internet and reading between the lines, I found a legal document which indicated to me that the Dominion Snath Company was ruled to be liable for unpaid or disputed import taxes by the US Government. This was 1966, the same year as the company ceased business. Governments are the killer of small enterprise, it would seem.

Quite to the contrary, the Dominion Snath Co. was a fairly large company, and was a familial offshoot of the famed Derby & Ball, which was the single largest snath manufacturer in North America. However, by 1966 the market for snaths was insufficient to keep the company afloat. The unpaid taxes are more likely the result of having insufficient funds to pay due to being deeply in debt rather than taxes from the government being in any way responsible for the collapse of the company. They were simply not diversified enough in their product selection to whether the downturn in demand for snaths during that time period.

Any idea what the 105 was for and when manufactured? Any other info you have in the item?

The 105 was an unbelievably hefty bush snath and was best suited for railroad crew use 'cause the laborers were generally pretty low-skill and beat up their tools a lot. They're a real baseball bat of a snath, but can be shaved down to a more appropriate thickness for general use. To the best of my knowledge they were still making snaths up through at least the late 1950's if not early 60's but the 105's I've seen were mostly 1930's through 1950's

I've had a DERBY & BALL scythe for a couple years. I dont remember where I got it, probably an auction or estate sale somewhere. Label is about 95% complete.