In between painting the basement walls and boxing up household goods I did manage to find enough time to draw up Sheldon Springs. Sheldon Springs is located west of Sheldon Junction (see the close up map here). Highlight of Sheldon Springs is the Missisquoi Pulp & Paper Co. plant, which is by far the largest single industrial customer on the Richford Branch. The first map is an overall view of the area and shows how the various elements fit together. (Click on the maps to enlarge).

The Missisquoi Pulp & Paper plant was located on a spur that swung northwest from the Richford Branch proper. The mill itself was located downhill from the CV tracks at the base of a fairly steep hill. The paper mill had a small switch engine (even had it's own engine house between the mill and CV main). But the CV did switch the mill, although CV engines couldn't operate past the points denoted with the red "B" on the diagram below. 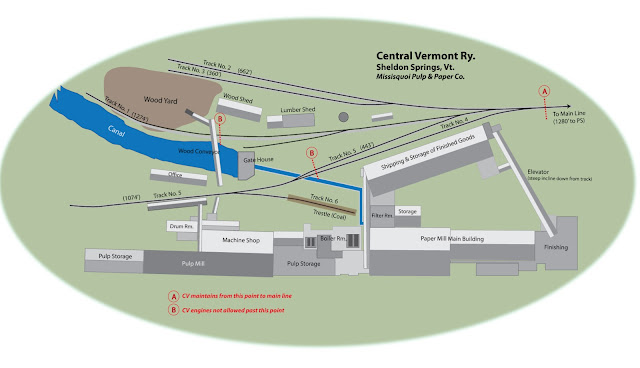 Typically the Richford freight required two engines for power. George Corey provided this shot of N-5-a 2-8-0 no. 466 shoving on the rear end of the Richford-bound freight at Sheldon Springs on February 23, 1957. Within a month steam would be dead on the CV. (And yes, freight car nuts should check out the GTW rebuilt boxcar ahead of the van). 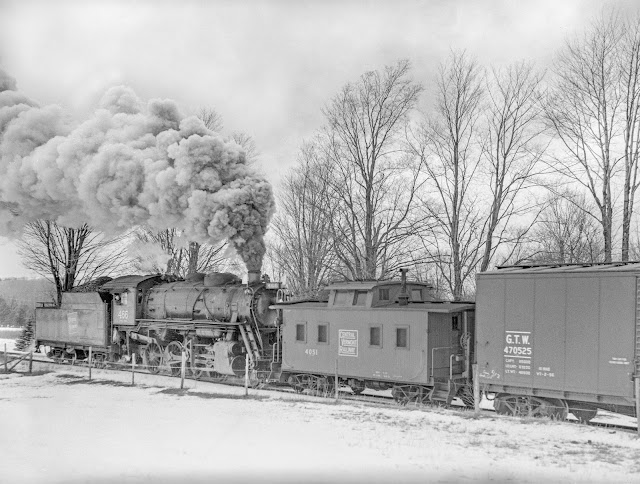 This is looking like a really great project Marty! What was the reason for the two engines? Did it have anything to do with the grade on the branch – or did it facilitate switching at the mill? I suspect it's the former, since I don't think it became a practice until recent years to use a locomotive on each end to facilitate switching. And what a great photo from George! Very evocative and lots to see – including a very cool fence along the right-of-way. Of course the caboose & the freight car are pretty amazing as well :-)

The two engines were used to handle the grades on the branch and didn't have anything to do with switching the mill. In fact, the St. Albans switcher - an Alco S-2 or S-4 would often shove the Richford local up the first hill out of St. Albans and then uncouple on the fly, leaving the two Consols to handle the train the rest of the way.

I followed the local from St. Albans to Richford in April 1972. It had two CV SW1200's and perhaps ten cars. The two units were working hard to get up the grades. I would be happy to scan the slides for you. In June I followed the old ROW from Richford to Sheldon Jct. The grading is still very evident and ROW appears to be used as a trail for ATV's and snowmobiles.

Depending on your era there is opportunity for the SJLC 70 tonners at Sheldon Jct. and the CPR's RS-2's at Richford. I have also seen a photo of a CPR E-8 northbound in the trainshed at St. Albans. It was in the original paint scheme so had to be between 1949 and 1953. No info but the speculation is the CPR Conn River line was out of service so the Alouette from Boston was rerouted over the CV from WRJ to St. Albans and then up the Richford branch to Richford to regain the CPR Newport Sub. and on to Montreal.

As a bit of history, I found Sheldon Springs as a destination in the 1884 Pennsylvania RR Summer Excursions book. It states "Sheldon Springs has no less than 20 mineral springs. It is claimed some of these are efficacious in the treatment of cancer." It had two hotels, each with a capacity of 150. Excursion No. 1280 was by train from Philly to NYC, steamer to Albany, D&H to Ticonderoga, Lake Champlain steamer to Burlington, and CV to St. Albans.

Hi, Marty:
I've sent you three photos from Sheldon Springs in 1981 via Facebook... please check your PMs for a message request. This is a very cool place.
Steve Hunter

Ian,
Sorry for the delay in responding but dealing with the house(s) and move caught up with me before I had a chance to respond.
thanks so much for sharing your recollections of the Richford branch - the story about the Alouette possibly detouring up the branch seems plausible. Even if it didn't use the Richford Branch a "washout" somewhere in the area on another line would justify running a couple of extra trains up and down the branch in those cases where I had a large operating crew over.
And more to the point, I would certainly be interested in seeing any photos you would be willing to share -- you can reach me via private email at mjmcguirkATcomcastDOTnet! thanks! Marty