The space in the basement for the new layout has been roughly defined, meaning it’s sufficient to start some rough sketches of potential benchwork shapes and the like. Or so I thought.
These sketches are nothing more than doodles … and attempts to apply the John Armstrong’s by the squares and “givens and druthers” approach proved equally unsatisfying.  It simply wasn’t working for me.
Mike Cougill and Trevor Marshall have written extensively about their model railroading and layout design philosophy on their respective blogs.  Rather than attempting to review it all here, I’ll suggest you read them for yourself (See here and here for some examples, but be sure to look around at both of these excellent blogs while you're there).
I believe the essence of what they’re saying can be boiled down to “What story are you trying to tell?”  While this is a novel approach to thinking about model railroading, military modelers and miniaturists have done for years. Meaning we might be able to learn something from them.
Typically we jump right into layout design by figuring out how to fit the longest possible run into the space.  The question of “why” is left unanswered.  Instead, thousands of gallons of ink are spilled on explanatory text “I’m modeling the XY&Z railroad from Town A to Point B…” I’ve edited and you’ve read more than our share of such exposes so I won’t belabor the point.  Instead I’ll simply ask shouldn’t the story we’re telling be painfully obvious with nothing more than a single glance?  For example, see Sheperd Paine’s “How to Build Dioramas” – a book that should be a part of every modeler’s library.  Paine was a master at crafting a storyline for each of his dioramas. Check out the cover photo of the diorama depicting an aircraft assembly line in WWII – what stories does that one image tell? 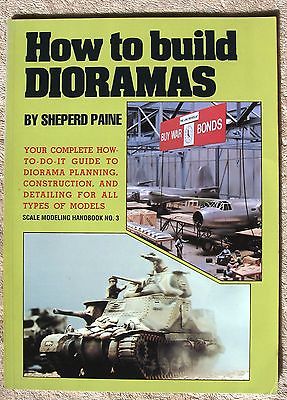 Truly gifted artists and craftsman imbue their work with an indelible stamp.  And, while I think most model railroads fall well short of being “art” some model railroads do indeed cross that threshold.  These are the layouts built by excellent craftsman with a strong, well defined theme – a story they’re telling.
Mike Cougill frequently refers to model railroading not as a hobby, but as “the craft.”  And I think it’s no accident that defining the story you’re trying to tell, not only about railroading but about yourself and your relationship to “the craft” extends far beyond the trains, curve radii, dispatching methods or other minutia that bogs us down way too early in the design process.
While it may be a little too philosophical for some, all this resonated with me to a certain extent.  I should add these same ideas are applicable individual projects as well as the layout.
I don't know how much all of this will impact the ultimate layout design, but asking yourself “What Story do I want to tell?” is worthwhile. I know I’m going to come up with an answer before I cut the first piece of lumber for the new layout. And I'm going to keep the answer in mind throughout the process of designing and building the railroad.
Posted by CVSNE at 11:30:00 AM

Another excellent and though-provoking post. And I couldn't agree more - you need to figure out what story you're telling first, and then have that be the hub around which everything (and I mean EVERYthing) revolves. This goes beyond prototype modeling alone (though that's an excellent approach that answers a lot of the questions outright), and sets the whole context in which your layout is viewed, not only from a macro standpoint setting your layout in time & space (Modeling the New Haven's Connecticut Valley Lines during the Autumn of 1948), but from a micro standpoint as well ("trustees" aka prisoners unloading coal from a hopper on the bulk track at Wethersfield station for the power plant at the prison; Dave Messer's bike leaning against the station; John Wallace waving to the local as it goes by the end of his street). To the extent that we want our layouts to be a time machine, we have to know the story we want to tell. And keeping a high level of attention to detail (historic as well as model detail) will help tell that story -
and all the little "mini-scene" stories - most effectively.

Thanks for another provocative post - as always, I'm really enjoying following your journey and am excited to see how your approach and choices evolve.

Marty, there is something really significant transcending your recent posts about dismantling an old project and starting a new one. That philosophical aspect is required... and a necessity. Too often, we gloss over it, starting right away on the next projects with blind enthusiasm supposed to wash over our doubts and questions. As you said, telling a story should be the first concern and it should be self explanatory. I smiled when you worte about all that virtual ink spent trying to explain a project. Art (and craft) that needs explanation to appreciate fail miserably at their task. Isn't weird that model railroading - a hobby that can tell a story in real time - is so unable to address that key issue.

That said, I just wanted to add that once you've nailed a scenario, you know have the story elements required in hand to start framing it (a.k.a. translate it into a working layout). The last layout can be seen as a rehearsal where you tried many things. And I found out recently that space had very little to do about the quality of a story. The givens and druthers is useless to some extent... obvious and useful information that can't give a real direction and meaning behind a project.

Chris, Having had the pleasure of seeing and operating your railroad a few times, I'll say you're doing an excellent job telling a story! Thanks!
Marty

Matthieu,
I have the luxury of plenty of time to think through this - after all the new house is nothing more than a graded lot at this point, and construction won't start until late next month!
In the meantime, I'm well into erasing the remaining vestiges of the old layout from the layout room (I spent the weekend repainting the walls for example). I suppose it's now dismantled in my head as well as in the basement.
The point about "gallons of ink spilled" came to mind as I sorted through stacks of magazines - formulaic layout "visit" stories that lack imagination or inspiration, all suffering from an incredible sameness. I don't claim to have the answer, but think on the whole our story-telling could improve, and authors and editors need to be diligent about identifying the one or two things that are truly noteworthy about a particular layout and dive into those in depth.
As far as the Givens and Druthers go. I think we do need to establish some standards and design to them, but I find diving right into "G&Ds" can tend to cause us to focus on the "mechanical" issues way too early in the design process.
For example, when we met with the architect who designed our new house he didn't start by asking us what kind of cabinet door hardware we wanted or other minutia - he started by asking us how we want to live in the space, and then arranged the floor plan to suit.

Thanks for the mention Marty. It will be fun to see how you interpret the ideas and make them your own.

No problem. Appreciate your blog and enjoy reading it! I can't wait to see how I interpret the ideas either....
Marty

Two thoughts - One - I'd bet a person could take any of John Armstrong's layout designs (okay, maybe not the ones he did for Atlas...but perhaps even those!) and find the story he is trying to tell, for himself or on behalf of a client. But sometimes the story may be, "I have all these neat trains and want to play with them...Look at all these trains!" That's an easy story to tell to anyone. Consider the audience. John's client either had a story in mind or he helped them discover that through the G&D process.

Two - Marc Davis, legendary Disney Imagineer, is credited with the ability to tell a story (most often humorous) in under a second, flat. See this blog post:

Can our layouts do the same? I suspect military modelers and diorama makers have something of this innate sense.

And a third, related thought: while we may have to explain a technical issue (like how to activate staging turnouts, our DCC system, etc.) to a visiting operator, how much story-telling does the layout do vs. op session paperwork, verbal instructions, etc.?

Best wishes on the planning work, and thanks for digging deep on this issue.

First my thanks for the blog entry alerting me to the thought provoking writing of Shepard Paine and Mike Cougill. I was familiar with Trevor Marshall but not the other two individuals. For me the timing is close to perfect.

Like you you i have recently torn down a small to mid-sized layout [9 x 12] as the result of a need to move from a large living space to an apartment roughly one quarter the size of our present living space. Also like you I have some time before the move occurs and ave been thinking about what i want to do next. The ideas expressed by the folks you highlighted have me digging deeper into the basic questions I so easily skipped over. That in itself is an interesting journey.

My initial focus has been on some of the ideas in Lance Mindheim's writings. Which to some degree complement the ideas expressed by Mike, Shep and Trevor. I now have no clear idea where this journey will take me but I am already enjoying the ride.

A final thought before I go. Could Lance's ideas about small shelf layout be helpful to resolving
your earlier diverging paths paths post by using the shelf to explore the Carolina modern short line ideas?