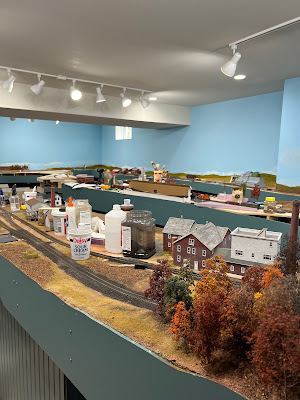 This is a fairly long blog post. After not doing much of anything model railroading related for a few weeks, there's been a flurry of different activities going on in the layout room this past weekend. Not only do I want to get some of these items off the to-do list for the open house, spending some time in the basement definitely helped take my mind off another, less pleasant aspect of the last two weeks (more on that below). Stic came by and we finished up the final benchwork cutting and fitting for the rework of the paper mill peninsula. The recessed area in the foreground will be part of the mill race. We worked through the details of the track arrangement, sticking pretty close to the plan (seen HERE) although I did add another spur that ends at the mill race that I only recently noticed in a few prototype photos. 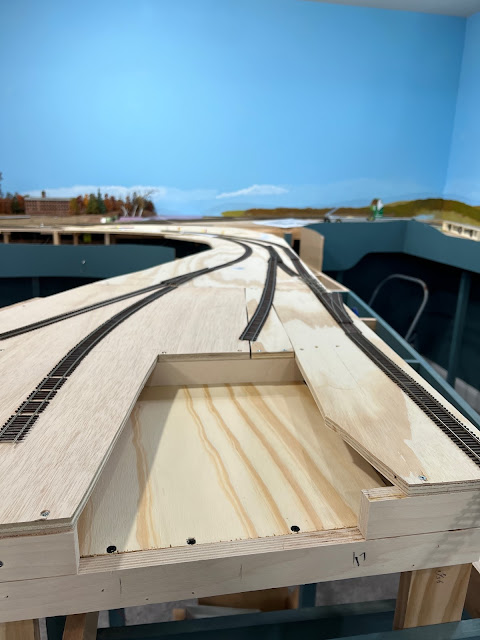 The track is (obviously) temporarily positioned in this photo. I'd hoped to avoid hand laying a turnout but frankly the track will flow much better if I do so that's a big item on the to-do list this week. Goal for the MARPM open house is get the track in place, wired, and tested and the fascia installed. 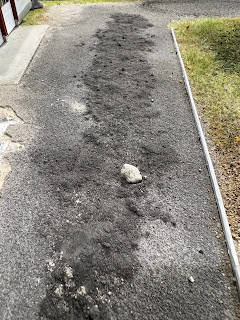 One easy task was getting a couple more roads paved. I smoothed out my custom blend of gray and dark gray (almost black) sanded tile grout using a foam brush, and soaked it. After it dried overnight it looked like older, faded asphalt pavement - exactly the look I was going for. 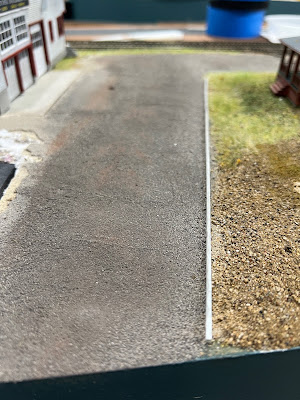 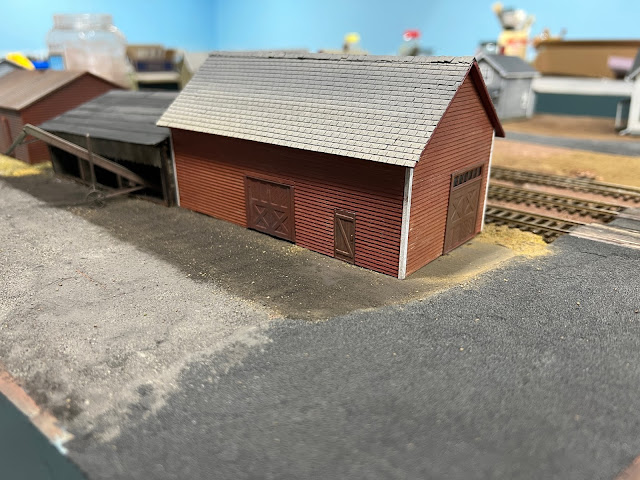 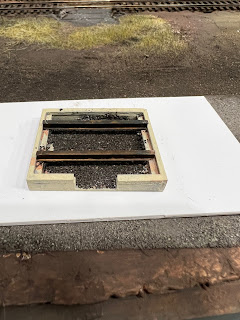 In an old photo of Enosburg Falls there was a garage like building facing Pleasant Street just south of the tracks. There was also a small door at approximately boxcar floor height alongside the track. Somewhere in the past someone told me this was actually a small warehouse for a local lumber dealer. I cobbled up my version of the building in an afternoon. Behind the building, and along the tracks, there was a coal shed. It's shown here with the shed from MineMount Models McGuirk Coal kit. I may end up building a different shed for this spot, but the overall dimensions will be similar. I also cobbled up a coal drop for this lumber/coal dealer using some styrene sheet. 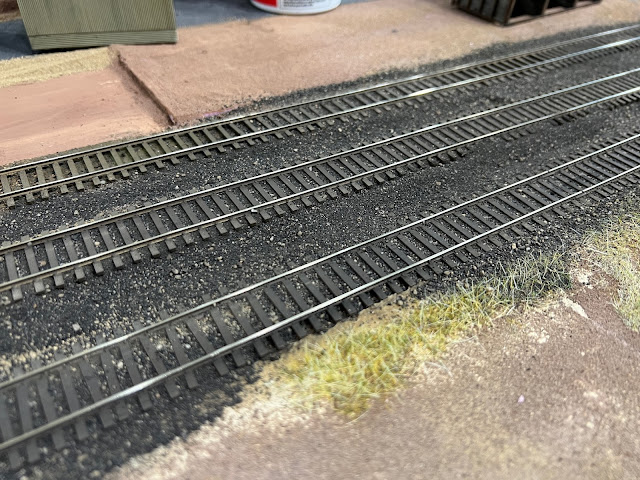 The other ongoing project, which is going to take a while, is ballasting the track that's in place. I managed to get a lot of the track in Enosburg Falls ballasted yesterday. I'll simply keep the stuff needed to complete ballasting at hand and do a little bit every evening - perfect task for 15-30 minutes a day! 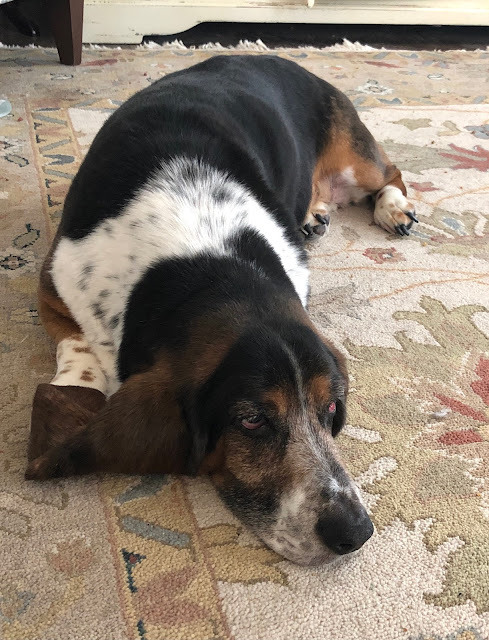 Anyone who's come to visit or operate on my layouts, watched my videos, or even followed this blog know about our Basset Hounds - Beauregard and Molly. We adopted them in 2008 when they were just shy of a year old and they've been part of lives - and my model railroading buddies - ever since.

He lost his sight suddenly last winter but since he was a scent hound he recovered from that quite well - although he could no longer safely go up and down stairs. Then in May he starting suffering from repeated bouts of a canine version of vertigo that he frankly never really got over. This was compounded by other health issues more recently. While he was a real trooper until the end we knew in our hearts he wasn't happy and was simply fighting his best to stay around for us. And that didn't seem fair. Sadly, last week we made the gut wrenching decision to say goodbye to Beau. We miss him terribly and really haven't adjusted to not having him around.

Every dog owner will tell you they've had one dog that they simply can't forget. And although I love Molly, Beau always was and will always be my "one truly special dog."

The photo below shows Beau in the alert Basset position. Next to him is a pair of my dad's socks that Beau had liberated from Dad's suitcase. 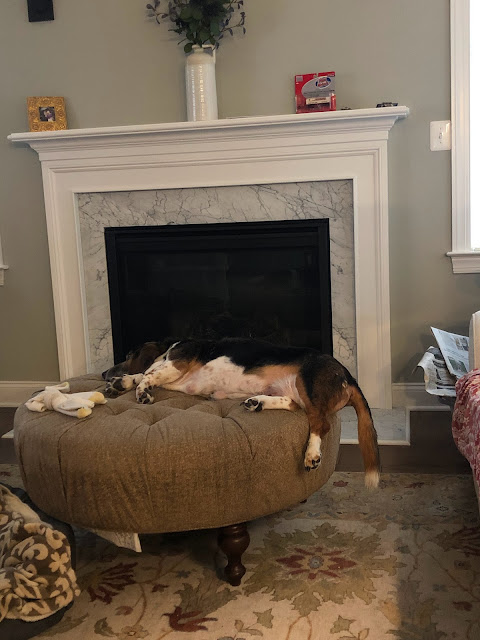 As my Dad described him years ago "He's not a dog, he's a clown wearing a dog costume!"

Marty, As with other dog owners, I can only express my sorrow for your loss. You now have a gaping hole that will never be filled fully. That first few weeks is tough. I still use a photo of our Brittany, Phreddie as my computer desktop. The photo you have of Beau assuming his normal position may well serve that function for you. I am glad you had the diversion of preparing for the MARPM Open House to distract you. R.I.P. Beau.

Marty, as a child my dog was a Basset named Toby. I know too well the hole you're feeling in your heart right now. I'm so sorry for your loss.

Marty, I am sorry to hear about Beau. My wife and I are members of a basset hound rescue group ourselves and share a passion for this special breed. There are no dogs quite like them.

I feel almost selfish at a time like this asking you about your grout road technique, so instead I will try and search your website for information. It looks really good.

I am sorry for your loss. It is heartbreaking to lose a special friend like Beau. I know your pain and wish you the best. Again, very sorry.

Just a quick note to let every one of you you know I've appreciated the kind words both here on the blog and through private emails regarding Beau. We'll never forget him! Thanks so much for your kindness.
Marty and Christine McGuirk