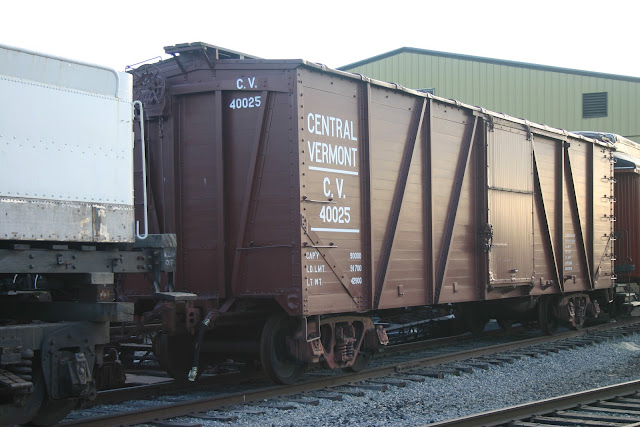 I was in Lancaster, Penn., for the Fine Scale Modeler Expo a few weeks ago. As I reported then, I took a trip to the nearby Strasburg Railroad, which is home to a number of nicely restored steam era freight cars, including a Central Vermont 40,000-series car.

It wasn’t in the best place for photography, but I did manage to get a couple of pictures in the late-afternoon light that show off the details of the car.
History
The Central Vermont received 200 of these single-sheathed 40-foot boxcars from American Car & Foundry in late 1924. These cars, numbered 40000-40199, represent some of the earliest examples of what are commonly referred to as “alternate” standard ARA boxcars. Although never proposed as a standard by the ARA’s Committee on Car Construction, more cars were constructed to this Howe truss design with two diagonals on either side of the door, than were built to the ARA standard single sheath design.

The underframe was wood, with six stringers in place of the typical single pair of steel, Z-section stringers.


The CV’s cars were delivered with wood six-foot doors, Andrews trucks, and Hutchins roofs. They had an inside height of 8 feet, 6 inches. As built, they were equipped with vertical brake staffs, but all would eventually be retrofitted with geared handbrakes and Ajax brakewheels. they also came equipped with Carmer uncoupling levers. The sides had seven grab irons, while the ends were equipped with six rung ladders with the stiles mounted far enough from the end to clear the diagonal brace on the end.
The ends of these cars were perhaps their most unusual feature. They were composite ends (wood with two vertical and two diagonal braces). Spanning these braces across the top was a pressed steel component referred to as a top end plate. The Car Builder’s Cyclopedia, defines an End Plate as: 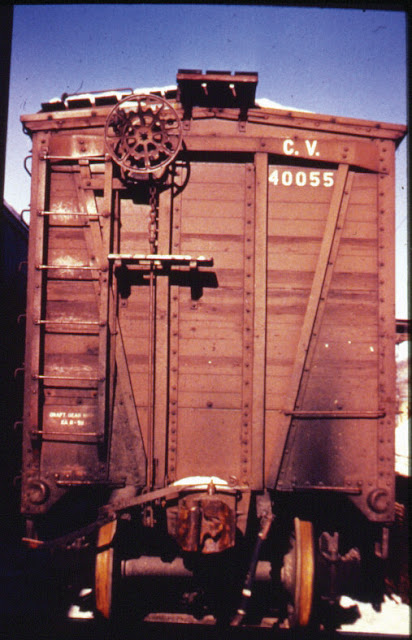 “A member across the end and connecting the tops of the end posts of a car body and fastened at the ends to the two side plates. It is usually made of the proper form to serve as an end carline.”*

Other single sheathed cars with composite ends used end plates of course, but what seems to make the ones of the CV’s 40000-series cars somewhat unusual is the fact that it was a pressed steel component, not fabricated from standard structural steel components.
The cars remained in service, pretty much as built, through the late 1950s and early 1960s when many of them were retired or placed in some form of company service.
Approximately 25 of these cars were modified with the addition of grain hatches to the roof and hopper bottoms for grain service.
Painting and Lettering
As delivered the cars featured the CV’s then-standard Roman lettering, with “Central Vermont” spelled out across all three “panels” to the left of the doors, and no "CV" initials, with the car numbers centered underneath. 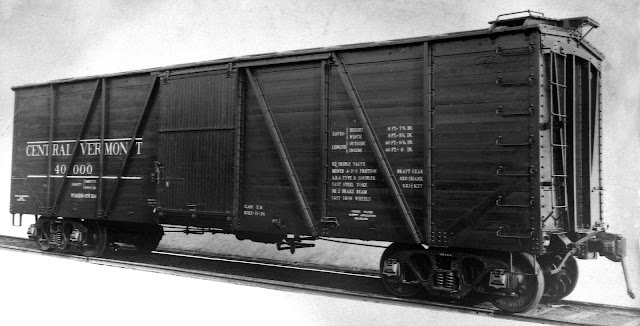 During the Second World War (January 1942), the CV changed to the stacked Gothic lettering, with the road name spelled out in two lines, with the addition of "CV" reporting marks above the car number, like that shown on the restored car at Strasburg, and on this car: 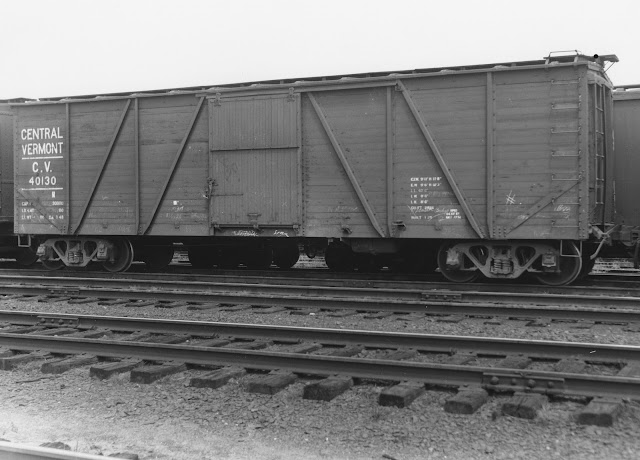 Initially, there was a white line above the “CV and below the car numbers. In later repaintings through the 1950s these lines tended to be removed, like in this view of 40050: 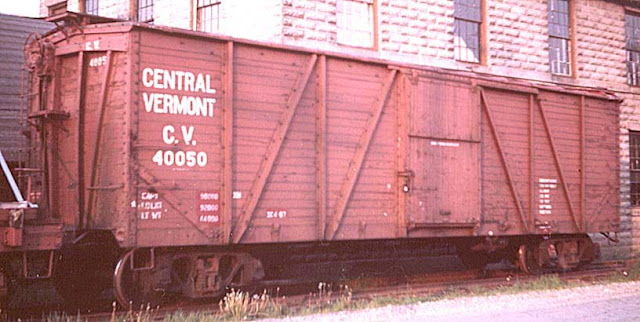 The final paint scheme on these cars was in the early 1960s with the addition of the intertwined CV logo on the door.
Models
A “layout quality” representation of these cars can be made using the old Train Miniature single-sheathed (incorrectly called by modelers “outside braced”) cars. John Nehrich described such a conversion in an old issue of Mainline Modeler, later reprinted in a book by Hundman Publications. Both are long out of print, but you can find old issues of Mainline Modeler at swap meets or on eBay.
About 15-20 years ago Steam Shack produced a series of resin freight car models for a number of CV boxcars, including the 40000-series cars. These models were made for Steam Shack by Funaro & Camerlengo, who still offers these as their Kit 7060 (as built cars) or Kit 7061 (cars equipped with roof hatches and hopper bottoms).
There are some issues with the F&C kit - the sides are rendered as heavily weathered - which some feel is a little on the heavy side (I tend to agree), making the model look like the prototype did late in life and not as these cars would have looked in service. There's also some issues with the ends - primarily the height of the end sill - on the resin cars it's much taller than on the prototype. But the Steam Shack/F&C kits do represent a good starting place for an accurate model.

*Thanks to Dennis Storzek for his help in determining the most accurate description for the components of these cars.

Thanks for these details on an interesting prototype. I did not realize these cars were built in 1924.
- Eric
http://designbuildop.hansmanns.org/

I'm browsing through Kaminski's American Car & Foundry book and on page 168 is a single sheathed IC box car built in 1914 with a similar top plate.

Randy, Thanks for the reference I need to check that out. - Marty

Marty, do you have any information or photos of the underframe of those flour loading boxcars, JOHN CVRHS

Or search the "Freight Cars" tab in the Labels section and scroll down until you see the post.

I didn't do a 41,000-series post since they were pretty well covered by Ed Beaudette's MR article - but I can certainly work one up.