The photo above is a panoramic shot showing most of the scenery I worked on over the last few evenings. Overall, I'm pleased with how it's turning out. I do need to add some additional textures and over growth, some more fence lines, and a couple of vertical elements such as foreground trees. But I consider this scene about 75% complete.
As I mentioned previously I'm doing my "Modeling the October Scene" clinic for Hindsight 2020 next weekend.

The last time I did this clinic was back in 2016 - so I figured I should at least try and update it with some of the newer products and techniques I'd played around with since then. Once I got the mainline realigned around the curve just outside the junction (a project that included changing a former spur into the new St. J interchange track!) I needed to patch the scenery around the curve.

And once I got the static grass guns out I simply kept going around the bend.

I liked the rock outcroppings on the hill behind the curve but the largest rock always looked like it was "floating" with nothing beneath it. A maxim of model railroad scenery is "hide it with a bush" - this is taking that to extremes - but some foliage netting (green and fall rust) looks like overgrowth and blends the rock outcropping into the scene. 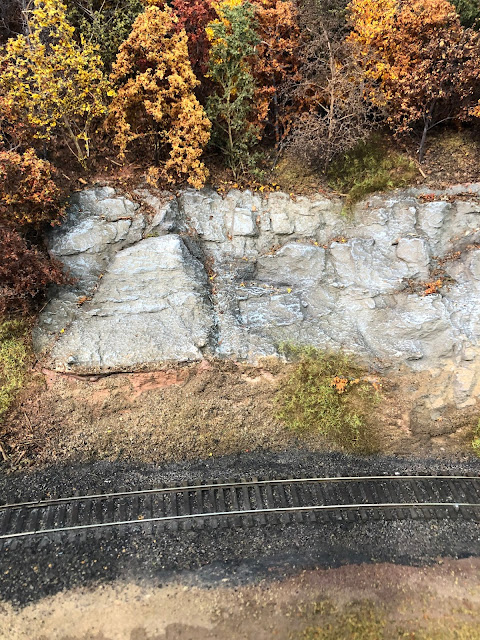 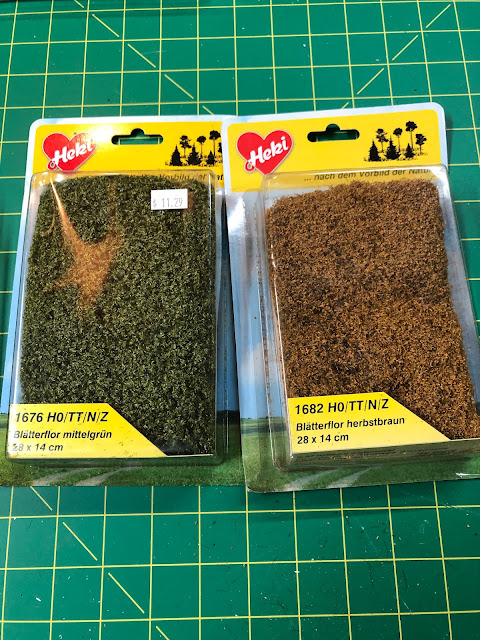 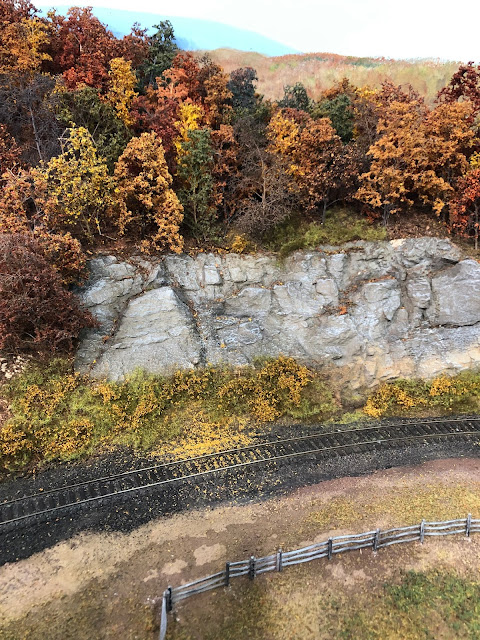 The barn (a BEST Trains kit) has found it's way into the scene - as has a Branchline creamery kit. Although not specific CV prototypes both buildings look the part.

The creamery was installed about a year ago, removed, and then re-installed. At some point I may replace it with a scratchbuilt model, but there's only so many hours in the day .... It does need some signage though! These two photos show the relationship between the creamery and barn. I'm considering adding a row of trees between them (basically to the right of the creamery in these two photos) to isolate the two scenes just a little. 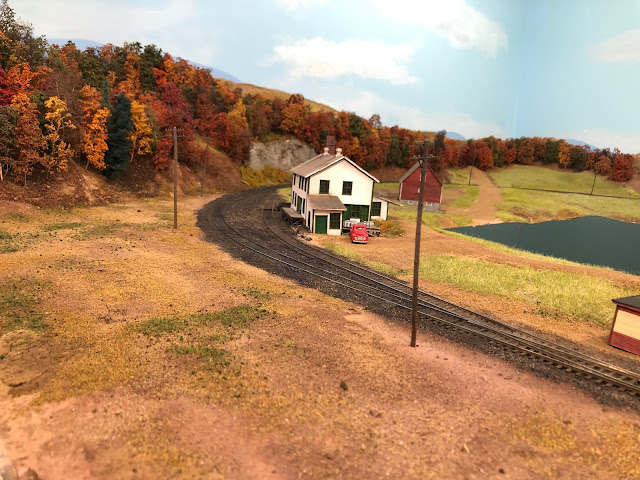 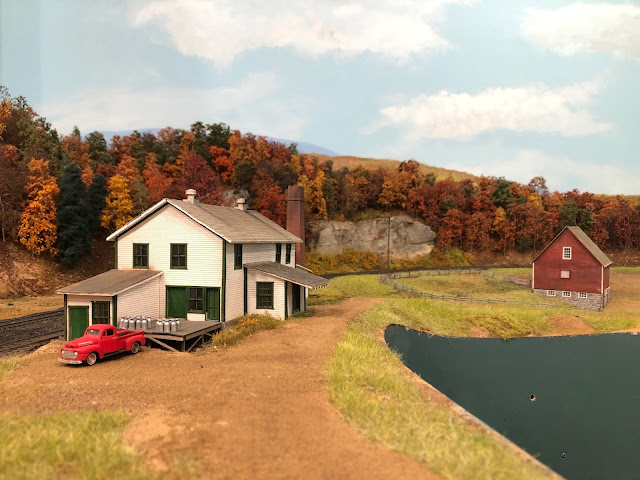 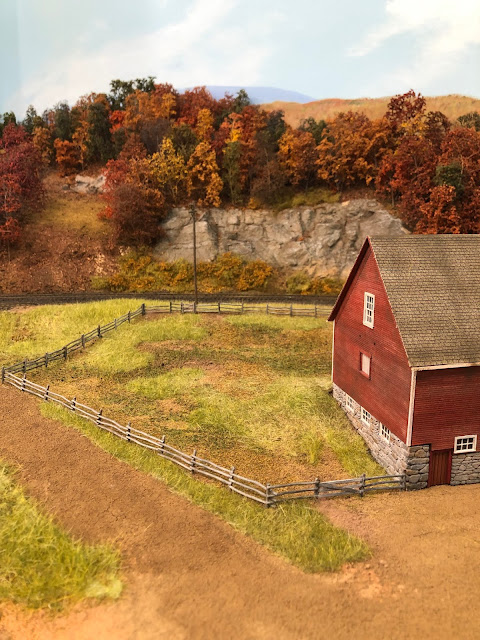 Although the barnyard looks okay (I really tried to vary the textures and types of grass and make it "patchy" on purpose) the area in front of the barn is still the neatest I've every seen. At some point I need to add well-weathered tractors, old wagons, stuff under tarps, etc... I have some of this stuff, just need to dig it out and weather it. 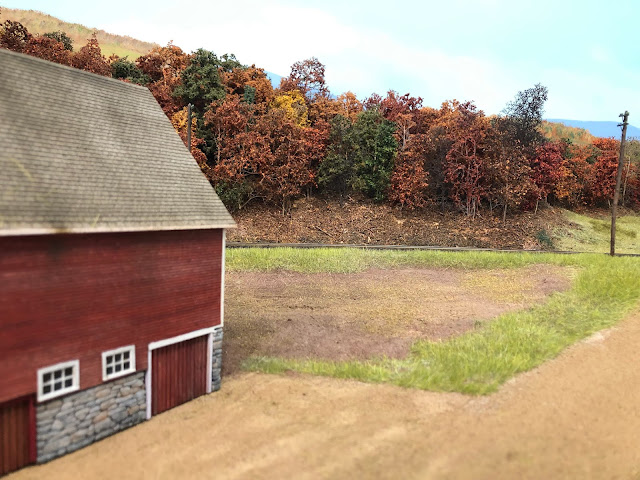 That blank piece of ground to the right of the barn in the photo above is "post harvested" something. I may go back and add a cornfield - maybe a pumpkin patch? My inclination is to leave it like it is for now.
And, in the interest of full disclosure, I'll stand back and you can see what the area immediately out of the view from the camera looks like! And yes, the new St. J interchange track is buried in there .... somewhere!! 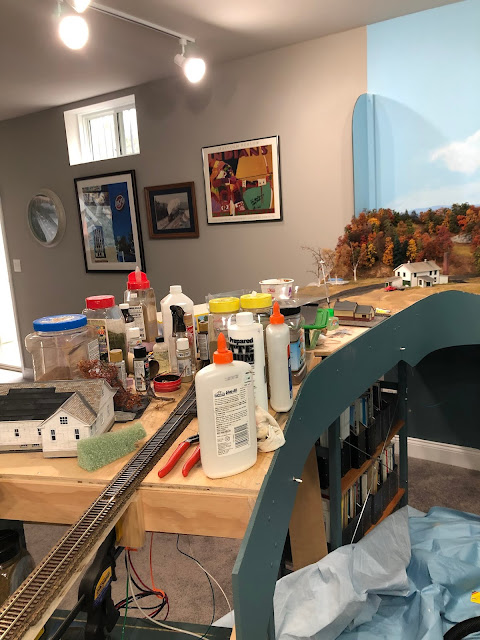 Email ThisBlogThis!Share to TwitterShare to FacebookShare to Pinterest
Labels: Scenery, Tips and Techniques

That's coming together really well! Looking forward to your Hindsight talk this weekend...