Trimming a Clinic to Length and more "Field Testing"

Taking a break during a busy day to post a few thoughts now that I've just about got my Modeling the October Scene clinic completed.

1. I'm actually going to present only the first half of the full clinic. (I'm doing the same clinic in person for our local NMRA Division in November - but the Hindsight Clinics are only 30 minutes long! So this one will cover scene planning, grasses and ground covers, and trees. The "season specific" stuff is going into the second half hour....

2. One thing I DO want to address is which specific "Fall" I'm modeling. After all, "Fall" ranges from all green (basically summer) to snow covered (essentially winter) and everything in between. My current layout is set in the "Past Peak" portion of the season - the leaves are still on the trees, but are no longer in full "neon" bright colors. The grasses are a mix of greens and tans, even in the same area. I did locate one photo (taken by Dave Sweetland) that shows "my" season: 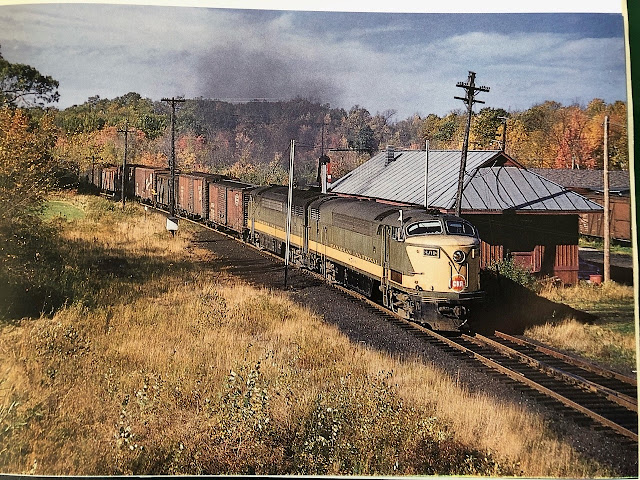 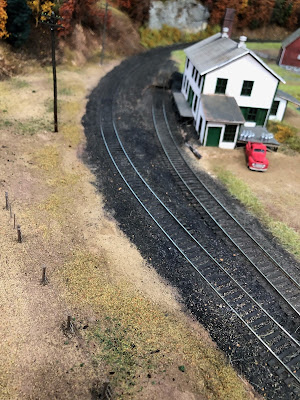 3. I thought the area across the tracks from the creamery appeared just a little unfinished. It's one thing to allow for "white space" but another to just slap some ground textures down and call it "done"! I added a fence line, shown in the photo below, which certainly helped. But often you'll see a wildly overgrown strip between the railroad right-of-way and the field. I wanted to try and capture that. 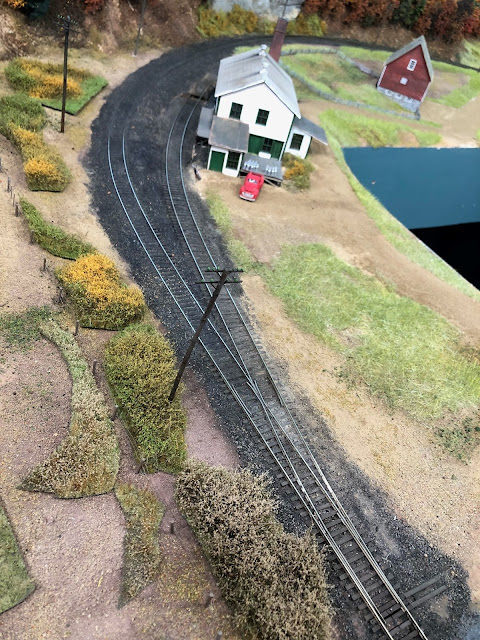 4. After seeing and hearing great things about Martin Wellberg's line of scenery mats, I purchased a couple of the fall mats through Scenic Express. At this point I've cut one or two up into strips and started arranging them. Obviously I still need to fill in all the gaps  between the intense overgrowth of the mat and the plain ground. Jury is still out on this one ... but it's fun to experiment. 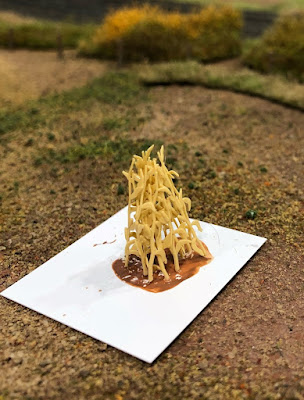 5. Speaking of experimenting - I've been playing around with making corn shocks (basically the corn "teepees" that were once commonplace in farm fields in the autumn. I've tried little pieces harvested from real grasses and weeds, wire with ground foam, and even trying to carve them from balsa foam. All of these met with zero success. I did have a package of Walthers "corn" sitting on the shelf so on a whim I simply duplicated what the farmers did - and cut the individual stalks off the sprue and arranged them to look like a corn shock. Obviously version 1.0 shown here needs a lot of work, but it's the most promising approach to date.

Reminds me of a package of Ramen noodles. I think if you colored them first and then glued them together the overall "look" would be there.

Yes, painting and weathering these things is going to be key - the Walthers corn really doesn't seem to want to take paint at all. The next time I'll certainly give them a coat of Dullcoate before anything else.

That was a great Clinic today, thank you for it. I am very smitten with the Martin Wellberg mats from seeing them in your presentation and your post here. I was going to ask on the Groups site what they were as I saw the name in your presentation but didn't write it down at the time. I am looking to create some rough undergrowth on a diorama I am working on, and they might be just the trick to create the rougher undergrowth and blend around them with regular static grass. Something to think about and evaluate now.