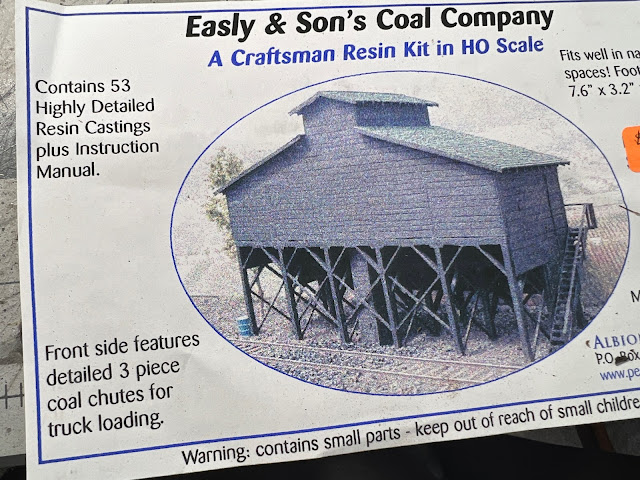 There's a fairly large open spot along the condensary spur between the condensary building and the creamery that seemed ideally suited for something like a coal dealer. And I had a kit squirreled away that I felt would be an ideal fit for this spot. Don't ask where I got it - it's entirely possible it showed up at MR as a review sample - more likely I picked it up at a train show for a price I couldn't resist. (If I paid more than a $1 for it I got ripped off). The "list price" on the thing was $75.00!!

I thought with relatively few parts this would relatively quick project - something to fill the open area between those two buildings until I could devote the time to a more detailed Finescale Miniatures coal bin kit I have for this spot.

Saturday evening I dug out the kit. It's a resin kit. The large pieces, such as the boards on the sides and ends of the bin, are actually nicely detailed. So I pulled the various pieces out of the box and arranged them on the table.

Step one in the instructions went on about "Some flash may be present" and "to carefully trim away" any flash.  Here's what "some flash" looks like: 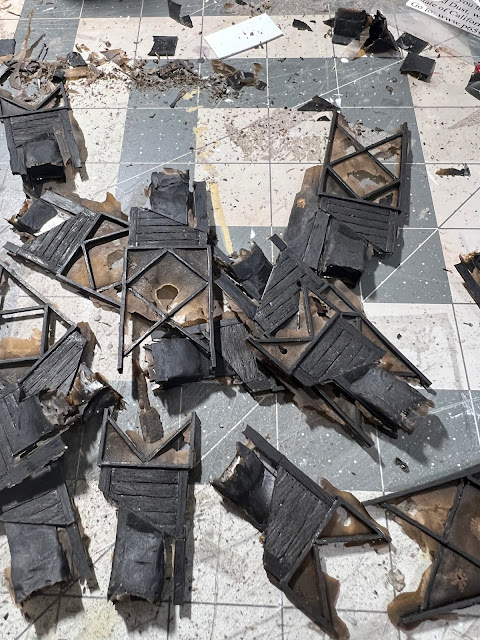 And it didn't help that this wasn't some more modern flexible resin - this stuff was like the old Westerfield "glass" resin - only much thicker with huge gates that were larger than some of the parts!  And in many cases it was difficult to discern the line between "part" and "flash." I should have surrendered right then and there but I persisted and spent most of Sunday afternoon (it was too hot and muggy to do anything outside) clearing the flash. Frankly I thought things were looking pretty good. 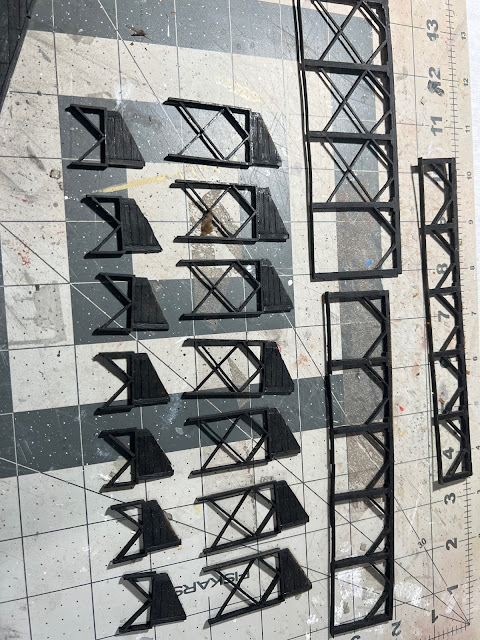 What's not evident in the photos was how the parts were warped and twisted. I tried my normal assortment of tricks to straighten and align the resin parts. This usually resulted in the brittle, hard resin breaking and shattering. But I pressed on.

I started trying to attach the leg assemblies to the bin walls and managed to break the taller leg section in a couple of spots. Frankly that helped since gluing the pieces back together got rid of more of the warps and twists.  Then I noticed the leg assembly was considerably longer than the bin - and shorter than the other leg sections - so even without the warp the thing simply wasn't going to ever fit right.

I decided to let the model sit for a couple of days - sometimes stepping away from a project helps solve whatever problems you're having.

Not in this case.

So last night I came to the conclusion that I'd wasted an entire afternoon and a couple of evenings of modeling time on this thing that would never produce a satisfying result.

So I cut my losses and did what I should have done as soon as I removed the pieces from the box - I pitched the thing. Guess I know why this company never did a second kit ...

Eugh. That stinks. "A" for effort though!

Very interesting and enlightening post. You are not the type of person to throw a model or manufacturer under the bus, and also have a very good skill set, so your analysis of the kit is very useful and eye opening. I too own this kit and have been carting it around for years in case I built an Erie module in lieu of my usual C&O interests. I purchased it ages ago at a meet and apparently paid 30 dollars. I found it intriguing as I had seen few resin structure kits at the time. A some point I did some test fitting and was also put off by all the junk resin but did not move on putting it together at that time. While I am not yet prepared to junk it I think this kit will remain in the box as your verdict seems pretty definitive. I may go look for it and take out the parts and see how it looks. I appreciate your review and all your posts.

My experience with this kit can be summed up as "sometimes a man has to know his limitations..."

My first instinct was to stick with it - I was thinking about scratchbuilding a new set of leg assemblies - when I remembered this was supposed to be a "stand in" ....