Pulling together the Junction Scene

With the freight car catch up project completed, I've redirected my efforts to finishing up the Junction/River scene, based in spirit, if not entirely in fact, on Sheldon Junction, Vt.

I've been making good progress on South river Model Works Streeters & Clear Brook kit, and have managed to get the store walls assembled, meaning I'm at the point in this project where I can start locating an appropriate spot for thing. One nice thing about this particular store is the fact that there is little or selective compression, meaning it's the size an HO scale country store should be, and not, as is often the case with a craftsman structure kit, more like an N scale building with HO windows!

A logical place for it seems to be some place between the bridge and St. J & LC crossing. 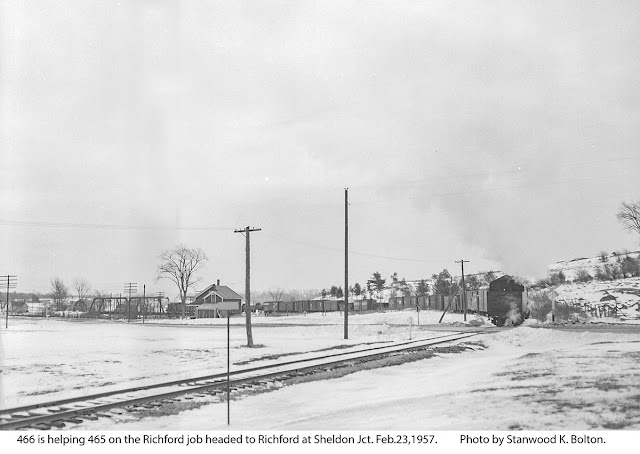 Here's the prototype inspiration for my scene. Note the bridge to the left, behind the darker structure.

I have seen numerous references to a store being located at Sheldon Junction - and though I'm not modeling the prototype exactly, including the South River Streeters Store doesn't seem like much of a stretch. I don't think the building in the b&w photo is a store - I think it may be an old creamery that has been converted to a residence.

My plan was to place the feed mill that's part of the SRMW kit on the siding in the foreground (the one that dead ends in front of the St. J track by the crossing).

1. One of the neat things about the kit's feed mill is the way the rear shed addition is slightly downhill from the main part of the building. While the structure is designed to be built on either or a slope or flat ground, the slope adds a lot of character. Problem is the rear of the building would be at the St. J. track - meaning the ground would have to slope UP sharply to the meet the track. I think it could be done, but there's a river to the right - and the feed mill may very well end up below water level.  At best, the whole thing may look forced.

2. I haven't assembled the walls on yet, but placing the foundation in position looks like to me like the building will just seem, well, small.

3. This last one is really more aesthetic than practical, but the store and feedmill are shown arranged on a single diorama on the SRMW kit box. In other words, they go together. And that might not be a good thing. While most people won't know the difference, people familiar with these kits will instantly look at the scene and say "hey that's Streeter's from South River - I have that kit also...!" Not something I want to hear either from visitors - or from myself in my head. Seems the best way to prevent that is to not use the kits next to one another in a scene.

This last item is of course the bane of kits when it comes to a prototype model railroad layout. You really do need to scratchbuild most, if not all, of the buildings if the goal is to get something realistic, and not merely artistic.

I do have a feed mill leftover from the old layout. It's based on a structure that once stood across the tracks from the Waterbury, Vt. station. It's prototype size, which means it looks like it can handle a car or two of feed a week. It's also finished, which is a rare commodity around here, and not one to be taken lightly.

After playing around with several arrangements, the photo below seems to include the essential elements. The white house in the center of the photo is a stand in for the structure in the prototype shot. I plan to build a new model for this scene. Besides, I want something that's painted a color other than white - even if that "other" color is some form of barn red! 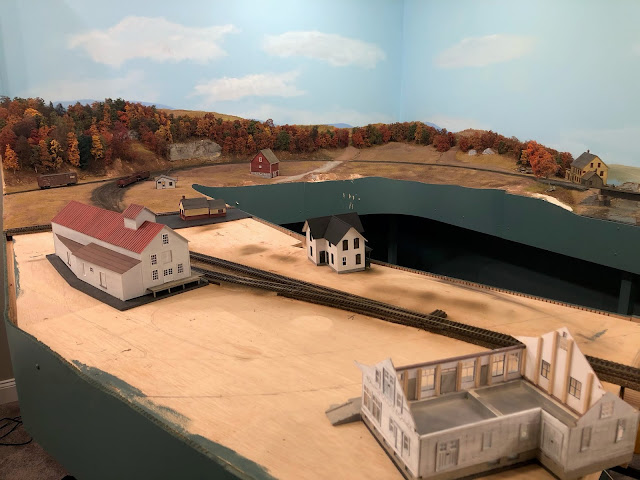 Interesting photo Marty! If I'm not mistaken, it looks like they've got an engine at both ends of the train. Did they need a helper along the trip, or was this train set up this way to deal with facing switches and no passing tracks?

It's a double header - the Richford local was frequently double-headed. In fact, sometimes the St. Albans switcher would shove it out of the yard, meaning the train would have an N-5 on the front, one mid train, and an S-2 shoving on the van.
The Alco diesel would cut off on the fly once the train got over the grade out of Italy Yard.