Although we’re not completely “moved in” to the new house (read: the cars are still in the driveway as the garage is plenty full of boxes) we are almost moved in – which means I’m looking forward to getting started on the new layout – hopefully at some point this summer. With that in mind, I’ve been thinking through how to approach building the layout.
The first possible approach is to build all the benchwork, lay track (even using something like Atlas code 83 track and turnouts as a temporary track), wire up the DCC system and be railroading. At that point I can go back and add more detailed track, scenery, structures and the like one scene at a time.
One of my favorite model railroad design books is John Armstrong’s “Creative Layout Design” that I got when it was first published in 1978. While the cover and interior layout of the book screams “1970s”!!, and some of the plans show the too-tight aisles and stacked track of many of Armstrong’s plans, the text and reasoning behind the designs is still valid – and the layout designs in this book were among John’s most creative and innovative.
One of the most unusual designs is for a large scale indoor layout based on the Maine Central’s interchange with a two-foot railroad. What was interesting and relevant to the topic of this blog post is the way John suggested approaching the project.
He included a table in the book that showed how someone could approach this particular project that required virtually everything be scratchbuilt. First build a section of layout, then build a narrow gauge locomotive, a combine, and several flat cars… once that was done build the connecting MEC standard gauge track, followed by an MEC Ten Wheeler… that sort of thing.
So how would that look on my Richford project? 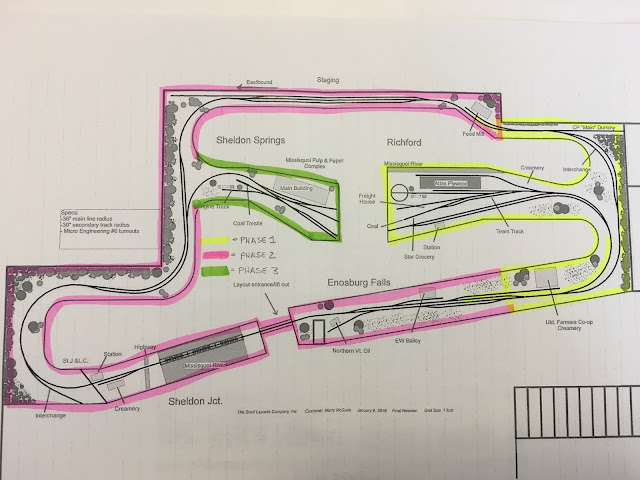 The trackplan highlights how I’d divide the layout construction into three phases – the first would be the Richford peninsula proper, with enough benchwork on either end of the base of the peninsula to firmly secure it in place and allow for a temporary staging track on both ends. Why start with Richford?
The answer in my case is that, with the exception of the plywood plant and perhaps the Richford depot, I have structures that I can use here.
Phase II would continue the benchwork around the walls (not shown is there may be a Phase IIa, Phase IIb approach – where I’d complete “Enosburg Falls” before completing Sheldon Junction, or some such.
Phase III would see the Sheldon Springs peninsula added.

Taking some inspiration from the approach outlined in Creative Layout Design, I’d plan on completing other other projects to the list. For example, I have two CV brass N-5-a 2-8-0s. Both of them need decoders and a paint job. With my prior layout the work on the layout took priority over all else, meaning I was using “stand in” locomotives awaiting a chance to “get to” the correct locomotives. Likewise, I had a lot of unweathered, out of the box freight cars to “fill out” the trains – with unbuilt resin kits in sitting in their boxes.

Here's a tabular view of how this might look for Phase I:

* This particular task is already complete as I have far more than 32 “completed” cars! ("Completed" means mechanically tuned, detailed including complete underbody, and weathered). The quantity of 32 is based on the total track capacity of Richford, divided by 50% - with one staged 14 car train. Thirty two cars is too many cars on the Phase I layout at once, so some of the 32 would serve to add variety to trains even at an early stage.

Once I reach “Task 8” in the table above I can either proceed to start Phase II or refine and “tweak” Phase I perhaps by adding more details to the scenery, scratchbuilding the structures to replace the mockups, build more freight cars and the like.
Of course one could combine both approaches shown – build all the benchwork, lay temporary track, and then go through a step-by-step approach for each scene as shown above.
My goal here is not to create Gandtt charts, schedules and the like but instead to develop something of a methodical approach – otherwise it can become far too easy to either get bogged down in the constant slog of a huge undertaking, or end up jumping from one project to another in such a manner that nothing gets done.

Interesting discussion. I fully agree with this approach as it is similar to what I did, although I deviated as time went on. My main regret was not having a more fully developed overall plan, but I did like the approach of building sections at a time. You have an overall plan, so you know where you are going at all times, but can focus on the main "event" only. This works as long as you do not feel the need to run a long train or do a full op session. Given your past experiences and start/restarts that you have chronicled, I think this approach is better suited to your goals. Having a plan like this is a good way to approach it and ensure success, in my opinion.