One thing I've toyed with over the last couple of years is an era change. I've long modeled "1954" since it represented the point when the CV's RS-3s were delivered.
But modeling the Richford Branch eliminates the RS-3s, and many other road units, such as the Canadian National C-Liners, FAs, etc... from "accurately" appearing on the layout. (If you promise not to tell anyone, I will still run those inaccurate locomotives for fun when, you know, nobody is looking.)
That leads us back to the potential era shift.
Moving backwards in time is still a possibility - but for now let's talk about moving forward on the timeline to the year...????
Moving too far forward on the timeline and the traffic on the Richford branch begins to seriously tail off - moving forward to "today" and I'll be modeling a bike path....
So I can't go too far forward.
Power on the Richford Branch for several years after the railroad dieselized was a single GP9. In later years several (four, if I remember correctly) SW1200s were transferred from the GTW to the CV. After that, power on the Richford local was typically a pair of SW1200s like the ones shown here. 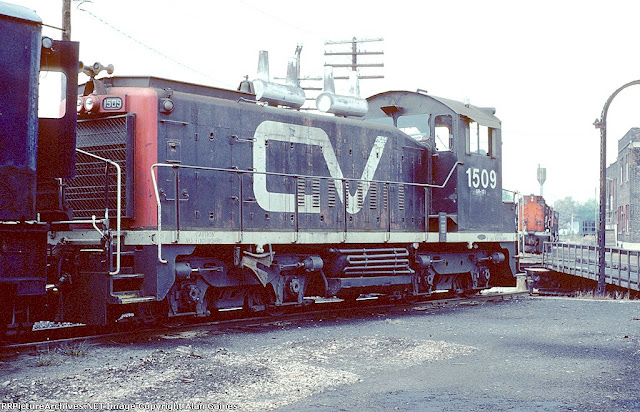 Which leads to a question for all the diesel modelers out there (of which I'm not one). What's the best approach to a good-running, good looking SW1200 that best matches the GTW/CV prototypes?

Not sure what parts may be around yet, but there have been some good Canadian detail parts to do most of the important details like the air line cooling coils alongside the fuel tank.Check out Rapido for a model base--that may already cover what you need. Failing that, a Proto2000 SW should be your starting point. Your choice as to whether you replace the cab with the excellent Cannon cab (thin walls for that "greenhouse" at the end). The rest of it looks like fiddling with creating details like the raised grid over the radiator opening at the top and the air horn bracket. These are good examples of the character found in switchers, particularly those from north of the 49th parallel! Good, funky fun!

A little birdy told me Rapido is going to make a run of their new SW1200rs in American Roads, once they're finished with the CP and CN runs.. :) GTW, CV etc...

I had the same thoughts as you about building one myself.

I acquired a Proto 2000 sw900/1200 along with a set of Rapido GMD1 flexcoil trucks. Unfortunately the Rapido Flex coils won't work because the gear tower is on the end of the truck vs. the center for the Proto units. So it ends up coming up through the battery box if it were used. I even designed the number bracket for 3d printing as there is no commercial part available. The project stopped when I heard about the upcoming Rapido units... The other option would be the New Walthers release of sw1200's with flexcolis and my 3d printed number board installed.

I'd sent a note to Rapido a few months ago asking if they were going to do the GTW/CV versions and never heard back. As long as it's actually more accurate than some of the other CV products that some other companies make, I'll go ahead and wait for them.
thanks,

Ive always wanted a pair of these sw1200s, as my dad and my grandpa and the rest of my dads family remember seeing them back in the 70’s, as they lived in East Berkshire for many years. I wish they took more than just two pictures lol! I was at the Springfield Train Show in Massachusetts this January, and spoke with not only a direct representative from Rapido, but also the people who advocated for them, and they will be announcing CV and GTW sw1200s after the current run comes out this fall, so we’re all looking forward to them in a couple years! In the meantime, I’d work with either an older Athearn or Proto 2000 unit, using available detail parts, as I have seen people build accurate models before.

Walthers has a new model coming out in a few months that matches these.

In looking at the Walthers website, it looks like this offers the best option - Walthers Part # 920-48444 - the undec unit. Although it isn't offered with a decoder installed.
OR I could get a New Haven one and strip it.
Also, I'm not entirely sure the Walthers Flexcoil frames match the CV style.

Actually, the New Haven unit has the wrong handrails - and the CN unit Walthers is doing doesn't have the Flexicoil trucks - looks like the GN units may be the closest..even though its dual headlights are vertical not horizontal.