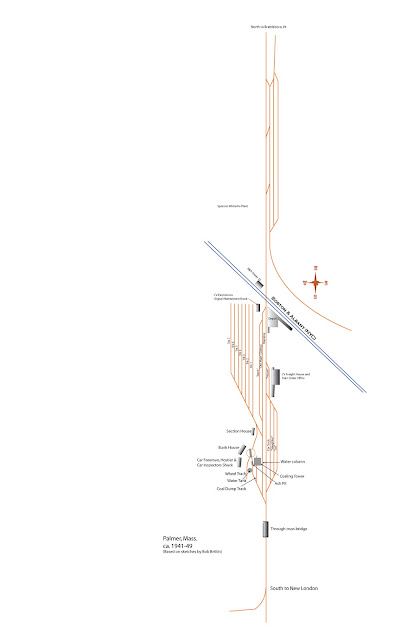 Mahty,
Wheyah ah you livin these days?
Uh few yeahs ago my wife asked me tuh build a Lionel Christmas train faw owah grandson so I abandoned the New Haven foah Lionel. Didun take too long befoah I got the scale urge agin and stahted tiny table layouts based on KCS and Frisco (we ah "temporarily" teachin in NW Ahkansas). But I did want tuh see if a Lionel Christmas layout could be anything but hideous and so took one of those 42 x 62 ovals and stahted in on makin it look like the Grand Trunk (that's THE Grand Trunk and not some Western impostuh). The tiny layout is entering phase two (scale) aftuh poking along faw a couple of yeahs with CP, CN, and MEC Lionel. That Lionel Mikado Jr. is about the right height faw a NH J1 while still havin a nice feel for the GT. Lot of trees and a moose pretty much make up thuh scenery. Wahl, nice tuh see yaw CV takin such nice shape aftuh abandonin nothwest Rho Disland. Who want tuh go tuh Providence anyway?
Best, Bob Madison (late Ninigret Cove Branch)

Interesting diagram. Is it "roughly to scale" or a schematic? I ask because the lead for the yard seems awfully short. If a layout designer did that, he'd hear all kinds of blow back from people about how it should be at least as long as the longest classification track, etc.
It's also interesting to see a stub-end yard on the prototype. I know they exist, but I don't see many of them. It sure looks like a model railway to me.
Are you planning to tear out the layout and build Palmer?
Cheers!
- Trevor (Port Rowan in 1:64)

Trevor, I'd say it's proportionally correct. The Palmer yard was the inspiration for the yard on my first SNE layout. When that plan appeared in MRP 2000 the first comment I received was about the "too short" yard lead. Actually, I'd (or more accurately, Iain Rice) included something of lead on the model layout - but as you mentioned, it didn't obey the model railroad "rule" of being as long as the longest class track. If I have a chance I'll try to clean up and scan the engineering department blueprints of Palmer to eliminate any confusion!
At this point I'm not planning another tear-out of any kind. I'm trying to keep to the "adding stuff" side of the coin when it comes to the layout.
Currently, I've been struggling with the exact track/structure etc.. arrangement for Essex Junction - perhaps a blog update is in order.