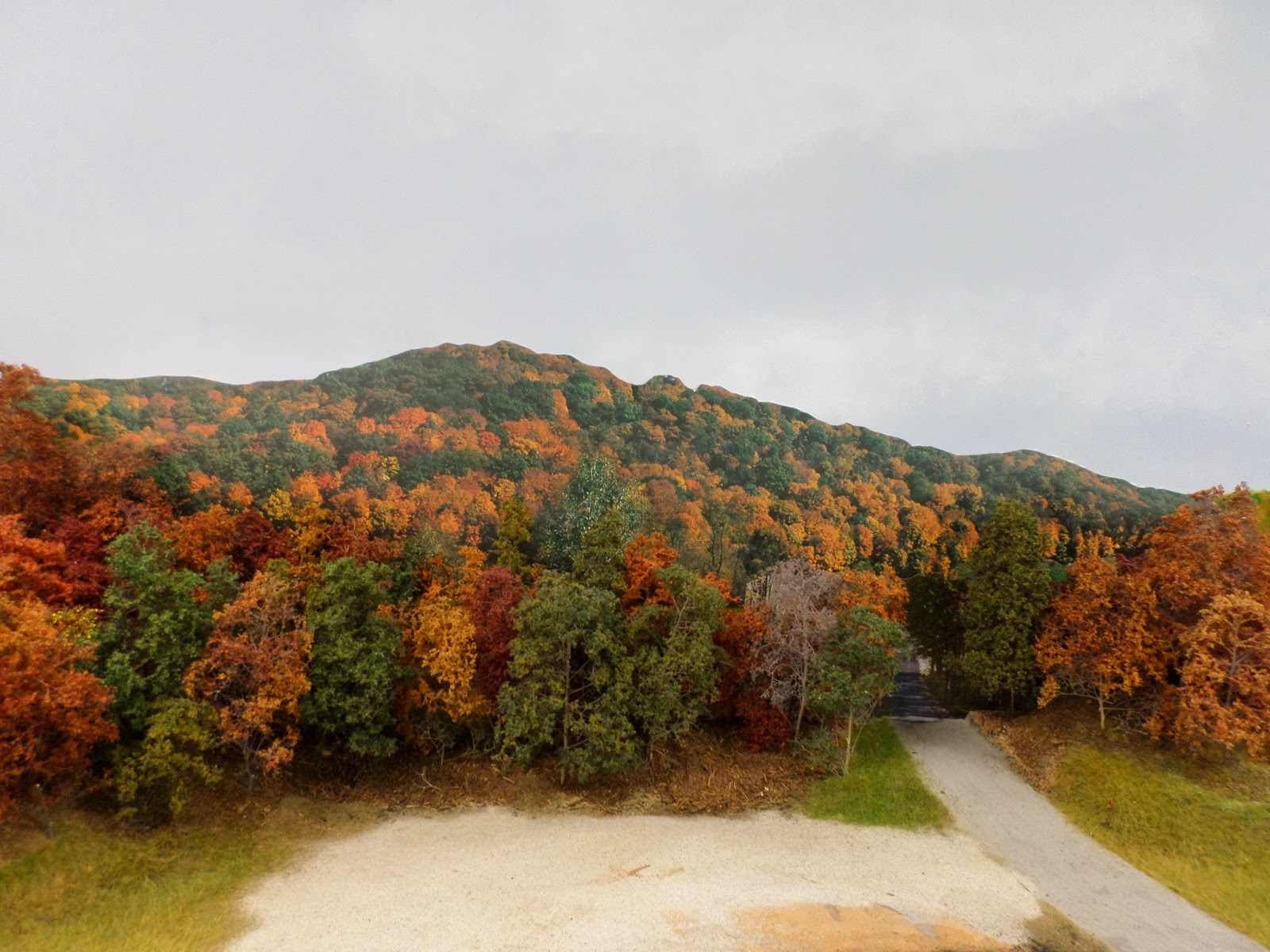 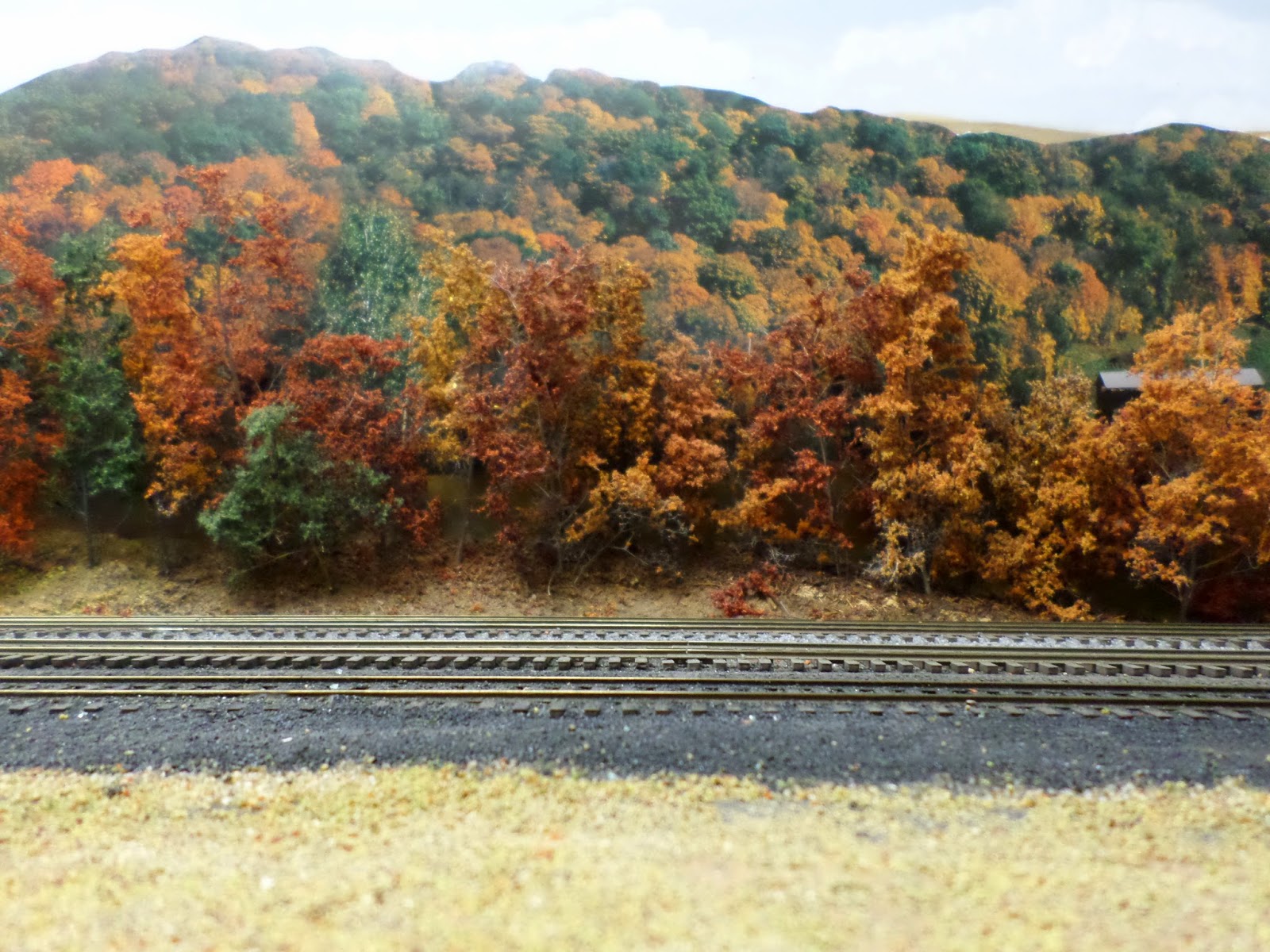 Yes, it's a question that divides otherwise peace-loving and agreeable model railroaders into two warring camps - do we use photos for a backdrop or go with a painted image?
Painting an effective backdrop is a skill - and a talent. It can be mastered but it's not easy.
Frankly, anyone can put a photo behind the scene on the layout.
And you'd think a photo, being a photo, would automatically be "better." It's not. It takes some skill and talent - and the right photos - to get a photo backdrop to look right.
Biggest issue I've seen with photo backdrops is the way the backdrop colors aren't even close to the colors of the scenery on the model railroad. Another issue is the photo backdrops can be just a little too much in the viewer's face, and there can be issues with light and shadow that are in a real photo but don't translate (or conflict) with the shadows and lighting on the layout.
Clearly there's no easy answer.
One of the most talented model railroaders I know who's built world-class layouts, has identified his limits and decided that plain "sky blue" with perhaps a slightly lighter horizon line with perhaps a very thin streak of "ground," is enough backdrop for him.
I decided to do a little experiment with a photo backdrop put temporarily in place of some of my attempts at painting.
I'm not sure what this proves, other than I'm not much of a painter.
I also haven't made a decision one way or the other - but I know what way I'm leaning.
In the meantime I have to finish prepping my clinic for Cocoa Beach, so I doubt I'll get this resolved before then.

I will probably be in the minority here but I like the painted backdrop better!

Me too. I feel that our models are an artistic representation of the real thing. Thus, they look better in an artistic setting rather than being compared to real life.
I think your backdrop painting looks great Marty. Wanna come over and help me paint mine?

Thanks for the kind words. I actually kind of enjoy the process of painting - I'm not great at it mind you, but I find myself getting "lost" in it - it can be very relaxing. Then I realize I've been at it for a while and my shoulders and elbows are sore...is there such a thing as "painter's elbow?"
I appreciate the "realism" vs. "art" approach - there's an additional somewhat practical concern. On the Model Rail Radio FB page someone mentioned the cost of photo backdrops - they have to do 20 feet. I have about 10 times that....
I think some of my foreground trees are a little too dense and the color needs some variation. I also need to lower the "front" ridgeline - the mountains closest to the viewer and use the modeled trees as that line. The distant mountains and the "hazy" horizon above the modeled trees looks pretty appealing to me - and the that's the whole point of this, isn't it?

Darel, Instead of asking me for help, ask Mike Danneman! That's what I did when I had a narrow gauge layout (yes, in my dark secret past I had an Sn3 layout....) !!!
Mike has, hands down, the only painted backdrop that looked just like a photograph!

I know right? And he only lives a few blocks away. Our horses were together at one time.
Seems you, your Sn3 layout and the Narrow Gauge Circle club were long ago already!

I have been largely unhappy in using photo backdrops in my layout projects. I have observed that photo backdrops frequently look much better in photos of the layout than when you see the layout in person. There are many reasons for this and Marty has touched on this above. A contrast in Color, saturation, perspective, shadows, and level of detail in the photo and the models can create perceptual dissonance. For example, an overly detailed photo backdrop can make the foreground objects (ie models) look more unrealistic or toy like. The last photo in Marty's post is an example of that.

I prefer the situation where the backdrop has a level of detail and color palette that matches the layout.That is very hard to achieve with photos.

For my own ACW layout, photos really are not an option, as no color photos exist. I have used small elements such as buildings cut out and colorized and those work well.

In my WWI layout I was able to use artwork sketched by American officers to depicts the destroyed buildings on the backdrop in the town scene. I also used a few colorized photos to depict buildings.

In working on the backdrop for JD's PRR layout, I am using cutouts of individual buildings arranged on an custom painted scene. Before I cut out the buildings, I process them in photoshop so they look more painterly and not true photorealistic.