Traffic in (and out) of a plywood plant

Most of the industries along the Central Vermont, at least in Vermont, can be summed up in one word - lumber. 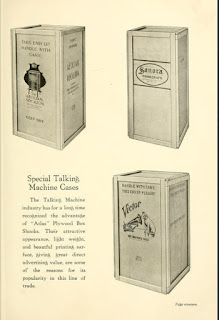 Furniture makers, door and window manufacturers, and even ski and baseball bat manufacturers all had one thing in common - their raw material was primarily hardwoods harvested from the verdent Green Mountains. One could even say another famed Vermont product - maple syrup - was directly related to the lumber industry.
So it was no surprise to me when I learned one of the larger industries (click on photo above to enlarge) along the CV yard in Richford was a plywood manufacturing facility. Specifically, this  particular plant specialized in making plywood shipping crates for shipping a variety of items, including "special talking machines."
So the outbound shipments are fairly obvious. Plywood crates, shipped flat in "shooks" (kind of like the Ikea of its day, I guess!) that can go almost anywhere other products are made. 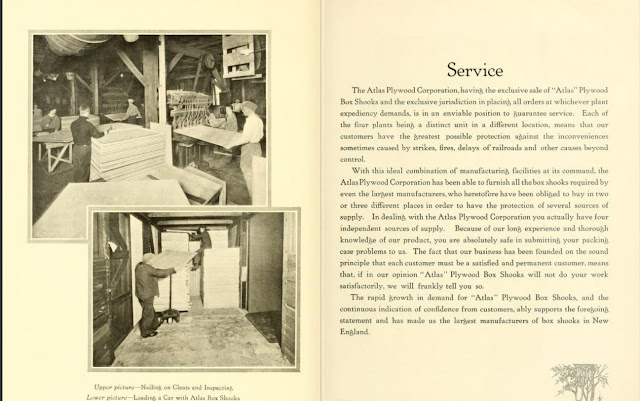 But I'm wondering what, if anything, would be shipped in to the plant? 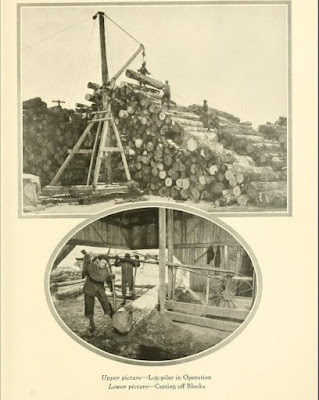 To make plywood you start with a log, strip the bark, and slice it into thin strips, called "plys."Glue is applied to the plys and they are stacked with the grain running alternate directions from one layer to the next and then they are subject to high temperature steam before the stacked plys are placed into a hydraulic press (below) that laminates the layers together forming, you guessed it, "plywood." 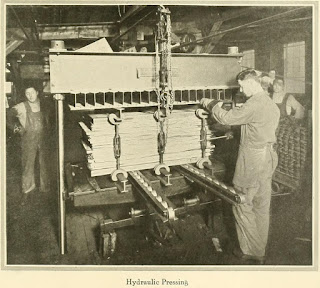 The raw sheets are then heated and stacked to dry, and will eventually be cut to size and/or sanded before being shipped to the customer (the illustrations with this post came from a 1921 Atlas Co. brochure - you can find the entire brochure HERE).
I'm fairly certain the plant in Richford generated enough wood scrap that the boilers - visible at the location of the stacks in the photo above - were likely wood fired, but who knows - it's possible they were coal fired or the coal provided supplemental power to the plant.
"Adhesive" of some sort may also have been delivered to the plant - at least that seems fairly logical. I don't believe the plant received wood by rail, although it may have in earlier times or in the event a unique species of wood was needed.
Turning up the brochure has given me enough knowledge to press forward with planning how to model the industry on the layout.
Posted by CVSNE at 12:03:00 PM

Thar was a very interesting article.

Are you sure wood was not received by rail? This text, last on page 14, indicates that timber could be received by rail, at least occasionally: "In addition to their own large holdings in northern Vermont and Maine, all four companies have access to large tracts in Canada, timber from which can be brought in by rail duty free."