As I've mentioned previously, I've been working with layout designer (and my good friend) Lance Mindheim on designing the plan for the new layout. Shown below (click to enlarge) is the layout design in the "current final" state - Lance and I both decided to forego any further tweaks or adjustments to this plan "on paper" - adjustments and tweaks may well be made full size as the layout is built - but with the possibility of the finished layout being a little smaller than shown here the basic footprint and theme are a 90% solution.
I'll post some more details on how the plan could be built and operated (which in turn will explain the layout design proper) in the future. 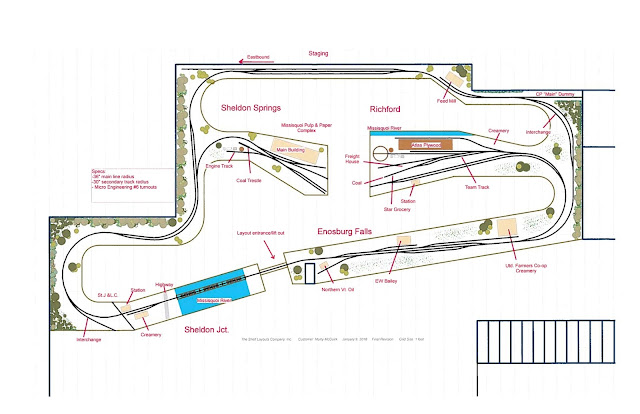 I like it Marty! It really captures the CV line nicely! I might have moved the switch to Richford further beyond Enosburg Falls so that you get the wye outside of Richford before it connects to the CP main, but then you'd lose some length for the CP interchange (unless of course you switch to N scale - just kidding). I look forward to seeing your progress!

Looks great Marty. I think it fits the space nicely and leaves lots of room for people.

Fantastic plan Marty. You should have a blast building that. In later years didn’t the SJLC or LVRC operate from Sheldon Jct. to St. Albans to interchange after developing bridge problems to the west? I wouldn’t be able to resist a plausible excuse to include those Salzburg 70 tonners.

I think this occurred during the LVRC years, 1980. After initially operating through Sheldon Jct. to an interchange point with the CV at Fonda Jct., the LVRC changed operations to use the CV route from Sheldon Jct. to operate direct into St. Albans. This helped alleviate issues with #447 stopping on grade to pick up LVRC cars, and also helped the LVRC get its eastbound cars sooner (i.e. direct from St. Albans, not via the Richford job droppingthem at Sheldon Jct.). This is based on my research. I.m not sure if STJLC ever operated direct into St. Albans.

The plan does include some interesting operation areas. It is manageable in scope. The scenes are not too compressed, which is good. But it just doesn't feel like a railroad in the Vermont mountains to me. I have trouble envisioning how the scenery will contribute to the mountain feel.

I would suggest that the plan include some view blocks. As it stands now, you'll be able to see the whole layout from any other point on the layout. That will make the layout seem smaller, and not a rural branch line where towns are miles apart.

It's entirely possible the 180-degree curve at the lower left may be curtailed - I need to mock it up full size and see how it fits the space.

I understand your point, and I think the layout will include some view blocks in the form of low hills and tree lines that will interfere with the sight lines. Personally, I have no issue with being able to see the whole layout "sorta" from any other point. Lance and I discussed this extensively - the basement has 10-foot ceilings - so does that mean I run backdrops up to the ceiling? Or make the whole space seemed scrunched by dropping a valence down from the overhead and artificially lowering the ceiling height. I'd rather play up the space - much better in my mind than creating a rabbit warren of backdrops that add complexity to the project and play absolute havoc with things like lighting.

I should also add the Richford line isn't really "mountain" railroading - actually most of the line is located in a fairly broad, relatively flat valley - so there aren't any spot where there are vertical cliffs or steep embankments like on the CV mainline around Waterbury.

Curtailed? I like it! It gives you space to model that fantastic bridge at Sheldon Junction.
If the horseshoe nature of it bothers you, I'd bury the upper left portion of it in trees.

Hi Marty:
Over all, I really like this plan. It's not overly crowded. It will provide fun for you (running solo, 90% of the time, I suspect - because we all do) and a couple of friends when they visit. It's definitely an achievable layout - one that you can get running in months (not years), and bring to a high state of completion while still leaving time for other interests and commitments. Well done, Lance - and well done to you for simplifying.

As for questions... do you have sufficient staging? I image it is for a branch line. But you know how that goes. More importantly, I guess - how will you store excess stock? I built a set of soft-close drawers using IKEA kitchen cabinets (lowers) under my sector plate. Two banks of 36" cabinets, each with six drawers, has given me space for a couple hundred 40 foot cars - and that's in S scale. (In reality, a drawer is for my DCC system, another is for locomotives, a third is for paperwork and other materials needed to operate the layout - but I still have more space than I should need.)

How about turning locomotives in staging? Are you comfortable with doing that by hand? I do on my layout - it's not an issue for me. But not everybody likes to use the 0-5-0 - especially not on motive power.

I like the use of the CP track at Richford to incorporate a continuous run option for breaking in motive power, keeping something moving if you have non-railway enthusiasts who want to see the trains, or for when you just want to see something roll. Nice touch. I suppose it also allows you to use a CPR locomotive to make the interchange active. Maybe the CPR train can hide on the spur at left in staging.