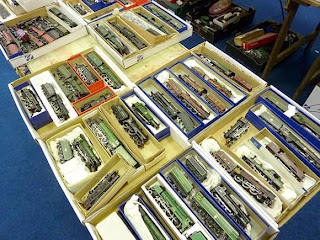 I haven’t posted in a couple of weeks since frankly autumn yard chores, medical issues (nothing serious), and acting on a promise to at long last get my wife’s dollhouse wired, have taken most of my attention.
I'm heading to the Fine Scale Expo in Pittsfield, Mass., at the end of the week. Don’t know what I’ll buy at the show, but it will likely not be too much. About three years ago, when I started the layout rework, I came to the conclusion that I had too much model railroad stuff. I have less now than I did then but that’s because I’ve been on a focused, long term (seemingly endless) effort to downsize. Like most model railroaders, I found it way too easy to end up with lots of stuff. Some of the causes of this were:


1. The manufacturers themselves. The limited run approach to producing model trains means if you don’t buy it now, it may not be available when you do want it. This leads to the idea that you “need” 10 or 15 of the latest freight car when it comes out – even if there’s no layout to run them on. The result seems to be a version of a well-stocked hobbyshop in every model railroader’s basement. Of course, this is really a form of “Checkbook” modeling (“Chequebook Modelling” to my Canadian friends…..) and can lead directly to that tendency to over accumulate.
2. Model railroading is somewhat unique in the sheer volume of published hobby material. At one time I subscribed to 5 or 6 monthly model railroad and prototype magazines – and had literally a hundred or more railroad books. Want a Railroad Model Craftsman from 1974? Or Model Railroader? Or Narrow Gauge Gazette? Or Trains?  I had them all, and more. And every issue published. All stored in magazine sleeves or stacked in very, very heavy boxes.
3. The tendency of model railroaders to find a variety of scales/gauges/prototypes/eras etc…. appealing. In other words, “Rubber gauging” – known in our house as the “shiny object syndrome.” A neat article would appear on an On30 layout, and I’d figure “I’d like to build one of those someday” – (see #1 above).
4. Model trains are (mostly) plastic and/or metal – and they have an almost infinite shelf life, meaning they don’t go bad. They just sit there.
5. For the decade or so I worked in the model train industry a trip to shows or visits to manufacturers would produce all kinds of “samples” – and like a kid in a candy store I found it hard to say “no.” So, I ended up with lots of stuff, most of which I’ve never opened. 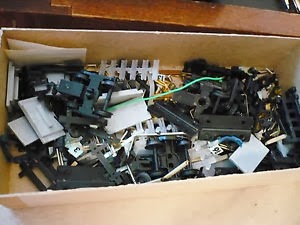 You'd think modeling a somewhat obscure prototype like the Central Vermont would make finding something to buy almost impossible. You'd be wrong. Most model railroaders I know, myself included, have enough items stashed aside under the layout and in closets that we rival a well-stocked hobby shop. Is this hoarding? Or is it simply being a knowledgeable collector who knows what he/she needs for the layout, and is buying it now for future use?
What brought this to mind was an ongoing discussion on the Model Rail Radio podcast, hosted by Tom Barbalet. As an aside, if you’ve never listened to the show I encourage you to give it a try.
The question of what to do with no longer wanted/needed model railroad “stuff” comes up from time to time on the show.
Hoarding has been publicized in recent times thanks to reality television programs featured on A&E, TLC and Animal Planet.  Perhaps more in common with model railroading is a show on SyFy called “Collection Intervention” (http://www.syfy.com/collectionintervention/about) that features collectors (usually comic book or toy collectors) whose collections have come to completely dominate their homes and their lives.
Without sounding like Dr. Phil I will offer the following. From everything I’ve read Hoarding and Collecting are two different things. Hoarding IS A DISEASE, and not a very fun one at that. It is a form of obsessive compulsive disorder where the person assigns a value to everything that passes through their hands. There are very excessive forms of hoarding – where everything, including what any sane person would consider refuse – is saved.
To me, a hoarder is someone who doesn't know what they have, never intends on selling anything, and is actually damaging what they do have with neglect, improper storage, etc.
So I would say no, model railroaders are not “Hoarders,” at least not in the clinical sense.
True collectors tend to buy and sell things to get to their definition of the best collection of their chosen field. They tend to be focused The buying and selling keeps things moving around, and they eventually end up in the 'right ' hands.
But wait – while there is certainly a valid part of the model railroading hobby that is “Collecting” – be it Hornby, LGB, Lionel, or even vintage HO rolling stock - that’s not what most scale model railroaders envision themselves doing. We’re not trying to build a “collection,” we’re trying to recreate a vision of the world. Which means we’re all about using the stuff we acquire – albeit at some point in the future! And while using it does provide us with enjoyment and satisfaction it also, by definition, “ruins” the collector’s value.


So, secure in the knowledge that I’m NOT a hoarder I set about “right sizing” the assortment of model railroad stuff residing in our basement. This has been an ongoing process – taking close to three years of effort.  In my case, focus became the key. Focus on one scale, one prototype railroad, and one era.
First, I completely cut out purchasing new model railroad items until I’d finished my inventory/purge process. eBay and swap meets mean the stuff will be there if and when I want it at some point in the future.  I did make an exception for specific Central Vermont items that I know were needed for the railroad and I knew to be rare.

Second, I ditched the paper – almost completely. I did keep most of the books - for now. As far as the magazines go, Prototype Modeler, Model Railroading, and Rail Model Journal are all available for free on line. So they were the first to go. Kalmbach released a complete set of Model Railroader on DVD – so all the MRs went to the recycling center next (I kept the bound volumes for the years I was on the staff). The Narrow Gauge Gazette is a wonderful magazine with inspirational photography – but I’m not a narrow gauger, and frankly while the pictures are inspiring I can’t recall the last time I used a modeling tip or technique from the Gazette that required me to save boxes of these things. So, off they went. N Scale Railroading and N Scale are very nice magazines, that aren’t applicable to my current modeling. They went to a friend who is into N scale – along with a couple of large boxes of N scale stuff. I also reduced the number of Mainline Modeler magazines from virtually all of them to a small selection of issues that had drawings of structures, cars, and locomotives I might want to build someday.
Where did these magazines go? Our local library has a magazine drop off system where you can bring old copies of magazines for other patrons to pick up and read at their leisure. At some point, I’m not sure when, the older materials are cleared out and taken to the recycling center. I’d like to think that most of the model train magazines went to someone who was interested in trains and has either created, or rekindled the once latent interest, of another model railroader or two.
Third – a real commitment to focus on one scale and gauge meant that all the extraneous stuff – including HO stuff for other eras and prototypes, and all that oddball stuff of different scales and gauges – went up for sale. The $ generated from the sales actually financed the purchase of a few specific CV pieces. eBay, several model train “Yard Sale” Yahoo Groups, and the like became the best ways to move the items. I found the key is to realize that the vast majority of this stuff doesn’t “hold its value” – and you better be prepared to take pennies on the dollars in most cases. The goal is to get the layout room cleared out, not beat the S&P Index…..but take solace in the fact that it will be out from under foot.
At train meets when I was selling this stuff if a young person seemed interested in a particular item I “significantly” discounted it. You might think this was “cutting into my profits.” There are no profits, remember?
And finally, what of all that stuff that I had been given over the years? Most of it has found its way to new homes – I try to give it to friends based on their specific interest. When my friends got tired of seeing me coming with more stuff (remember, most of them had their own boxes of stuff!)  I’ve been known to give it away at swap meets. My goal with going to a swap meet is not to bring anything home.
I’m finally at the point where I have so little “extra” left that I don’t need to go sell at swap meets anymore. I still have plenty of stuff left – more than enough for a few modeling lifetimes, but my checkbook modeling days are at an end.

Great commentary, and a very enjoyable read. I have a number of friends who are in a similar predicament as yours. However, their efforts at downsizing pale in comparison to what you've been able to accomplish. And I think most of us on the hobby have fallen victim to some of the causes you mention above.

I thought I was in a similar boat until I finished 4 tracks on the west end staging yard. Now I need a lot more freight cars and locomotives to be able to effectively use those tracks. A friend told me last week that I'm like the guy who builds a beautiful set of book cases but doesn't have any books to put on them. And what model railroader doesn't already have more equipment than they can possibly ever use! Well, I guess there's one...

Great post Marty!
I have a buddy of which we've traded the same boxes full of kits and equipment back and forth for what seems like forever. God I wish they would just go away.
Some of the rolling stock has more actual miles on them than their prototypes ever did!

Ah the rubber-gauger comment strikes a thread. And I have always been better at buying more things than actually getting the railroad built. Easier to surf eBay than to work on the layout.

Enjoyed the article about model train collecting, it rings true for those of us who are enthusiasts. I did want to add my support to the Canadians spelling of cheque book, being a member of the English speaking world including New Zealand, South Africa, Australia and of course the mother country England.

I'm sorry, and I don't mean to sound old-fashioned, but model railroading and asburgers syndrome basically go hand-in-hand, as does violent behavior and asburger's syndrome (anyone remember Handy Hook?)
So, yes, you are a hoarder, at least as bad as those TV shows, which, in my humble opinion, should be required viewing. We need to start acting like adults and not overgrown children living in Never-Never Land, and if that means having the government monitor our behavior, then so be it!