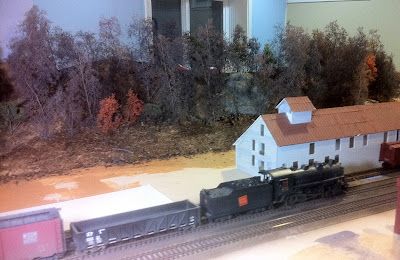 I haven't posted much in the last two weeks, but that doesn't mean things haven't been moving forward on the layout.  Some of this progress is not all that compelling. I mean, how many posts about putting down flex track and wiring feeders does anyone need? I also did a pretty major cleanup because three friends from our local operating group (Paul Dolkos, Mat Thompson, and Bob Warren) stopped by on the President's Day holiday to see the layout.

The Waterbury rework I mentioned before is complete. I made these changes so I could more closely match the arrangement of the prototype industries. I’d originally used commercial Micro-Engineering turnouts on the feed mill/freight house siding. But due to the fixed geometry of commercial turnouts I didn’t have enough length to include the feed mill, freight house, the two-story storage building, and the sheds for one of two rail-served retail coal yards.  Starting late last week I reworked the track at Waterbury, replacing the ME turnouts with a handlaid curved turnout that lengthened the siding by more than a foot. This meant I could slide the feed mill to the right as the scene is viewed from the aisle, opening up enough space for the coal sheds and other structures. You can see the before and after photos to the right. 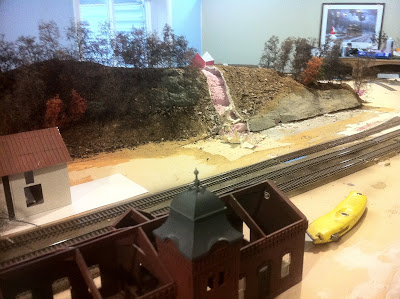 A few weeks ago I built a hill as a peninsula view divider but the adjustment in the track to slide the feedmill to the right meant the structure was right up against the hillside (I wanted a road behind the mill structure).  So part 2 of the Waterbury rework was to push the hill back, effectively creating more room for the town scene and taking real estate away from the millstream scene on the other side. I did this by removing the trees from the center of the hill, and then cutting the hill in half and carefully separating it from the from the layout base. 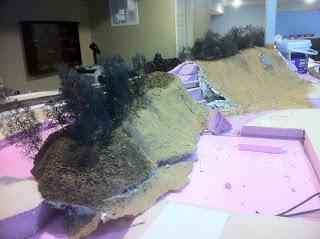 Then I positioned the end of the hill in its new location and patched the gap with plaster cloth. I added some rock outcroppings and applied earth colored paint and basic ground texture.  Once that had dried, I stained the rock castings, added some additional grasses and ground cover, and replaced the trees.

I like how these efforts opened up the area behind the tracks in Waterbury.  And the longer siding means there’s room to add the coal sheds. All the structures in Waterbury are obviously unfinished, but the templates for the freight house and the attached two-story warehouse show there's room for them, along with the coal sheds, represented here with a small white box. 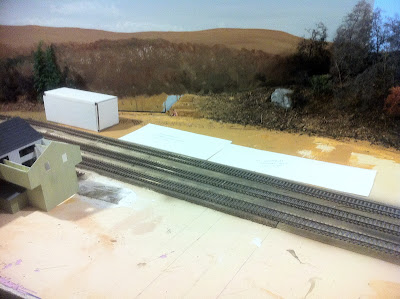