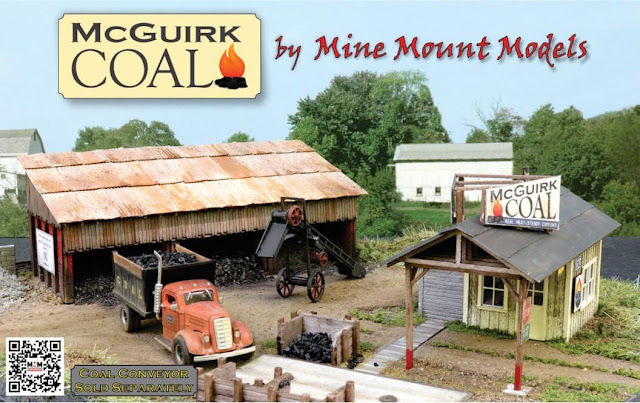 Mine Mount Models has released a very typical small town coal dealer. This isn't a fancy "bunker" dealer (like several Finescale Miniatures kits featuring tall wooden bins with hoist mechanisms). Those Finescale coal dealer kits are really cool, and frankly some of the most prototypically accurate kits in the FSM line, but they are big facilities, like those you would have seen in a big city in the steam era through the early diesel era.

Mine Mount Models new kit (named McGuirk Coal, since I suggested it to Mine Mount Models President Ron Klaiss!!) represents a much more typical smaller dealer with a low shed-like coal bunker. And while I'm honored he named the kit after our family, even if he didn't I'd still be suggesting you find room for at least one (or more!) of these in your steam era or early diesel era town. You could even model it abandoned and forlorn in later years! 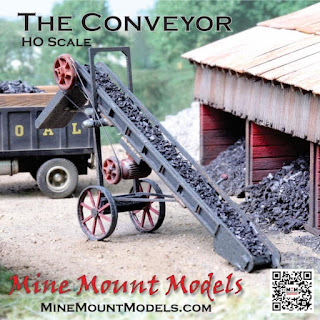 Ron is also offering a coal conveyor (actually it could be used for any bulk material such as stone or gravel). While Walthers makes a decent plastic coal conveyor this one is a noticeably different style, and is far more detailed than the Walthers one.

You can buy either McGuirk Coal and the conveyor separately, or you can combine them (which I did) and save a few sheckles.

You can order McGuirk Coal from this link: https://minemountmodels.com/shop/ols/products/mcguirk-coal-ho-scale or simply click HERE.

Marty, Can you help me understand how the coal would get from a hopper car into the bunker? The ads for this and other similar models show the bunkers hard against the siding, and it would seem that the only way to get the coal from the rail car to the bunker would be by hand shoveling. This would seem to work with gondolas, but it seems to me less likely with a hopper car. I'm not criticizing this kit or any other, just trying to understand the process because these ground-level bins seem ubiquitous in small New England towns. Thanks for whatever insight you can provide,

Marty Nice kit. An an appropriate name for it!

Marty, I'm modelling the CV Millers Falls scene and the last structure I need to build is the coal shed. You sent me a photo of the track side of the shed but do you know or have any photos of the street side. I'm thinking of purchasing this structure and modifying it to be more of a match of the Millers Falls shed. I would also need to get dimentional info on the shed from the manufacturer. Thanks for the heads-up JOHN CVRHS

Very cool to have a kit named after you. I may have to check out that coal conveyor, I may have use for something like that on my layout.