I got some more backdrop painted yesterday - the image below (please excuse the mess on the peninsula!) shows a view of the backdrop from the main "viewing aisle" in front of the layout. 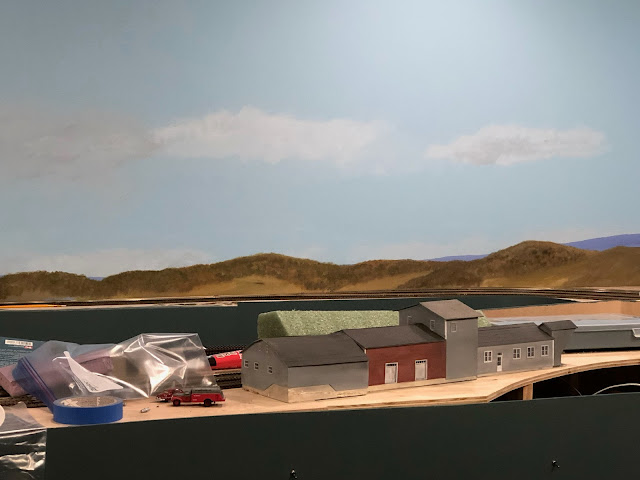 Longtime SNE fans may recall this tale of the design and construction of the famed helical tunnel on SNE #2:

"As you recall, last year the Company contracted with Colonel Niezgrabny Inzynier Kempinski to survey the route of the Southern New England from Tidewater to the Mashantucket Valley. This is, by all measures, considered easy country to accommodate a railroad line – with numerous watercourses and relatively low gradients – none exceeding 300 feet in a mile.Therefore, I was as shocked as you were to learn that the Company had undertaken the construction of a major tunneling project. I was especially shocked to find Colonel Kempinski, lately of the Polish Army Corps of Engineers and a recent immigrant to our land, had commenced, with nothing more than a rough sketch on the back of a napkin, construction of a tunnel only slightly shorter than the famed Hoosac Tunnel with a constant circular curve. The net result is a linear run of mainline approaching 1.5 miles with the two portals within sight of each other on the same side of a low ridge separated by approximately 150 feet in the vertical plane.My initial reaction was to sever all ties with the Colonel and send him back to his native Poland. Apparently the Polish Navy would like him to speak with him directly regarding his unique submarine door design (intended to improve air circulation, but at great cost).However, after speaking briefly with the Colonel (through a translater as no one can understand his Polish or broken English) I believe more than a fair share of the confusion for this debacle lies squarely with our own Chief Engineer's failure to provide the Colonel with detailed surveys of the intended route. According to witnesses, the Colonel kept inquiring of the Chief Engineer "Gdzie jest mapa?, "Gdzie jest mapa?." Unbeknown to any Southern New England employee this means "Where is the map?" Our men thought he was looking for directions to the facility since he was frantically jumping up and down.When one our younger employees said something to the effect "The Company is going around in circles" – apparently the Colonel's English is just good enough to take that statement as an indication of the intended route. So, we ended up with a tunnel that takes a lot of time to traverse and goes nowhere but up. 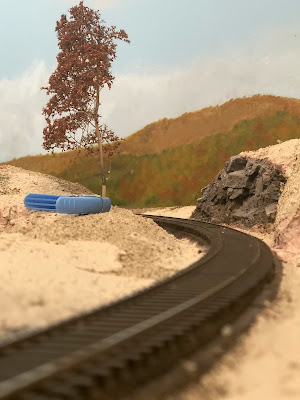 You'll also likely receive a communication from the Colonel regarding a tremendous personal injury he suffered when a large tunnel boring drill fell on his foot. His constitution is quite remarkable- I know of few men who can withstand the force of a 100+-foot long drill hitting their foot and continue working. But I assure you the Company bears no responsibility for loss or damages . . . what do you expect when you hire a guy to build a railroad who shows up wearing open toed shoes and who's name, roughly translated, means "clumsy engineer." 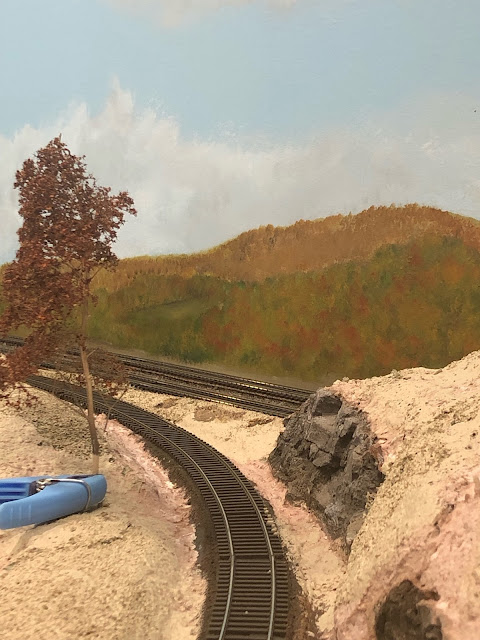 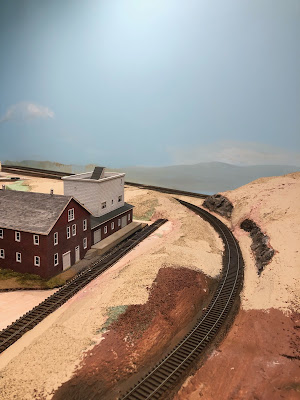 All kidding aside, I took a couple of quick snap shots of the curve area to see where and how many trees and other elements I need to position to effectively screen the view of the two staging tracks.  Here's an overhead shot (you can see the condensary building in place to the left) as well as eye level and track level views of the same spot.

*(The quote above is one of a series of emails from my SNE Mailing List. But it's firmly rooted in fact - Bernie Kempinski and I did indeed build a helix without any complex drawings - or even measurements. And he did wear open toed shoes and dropped a rather large drill bit right on his foot. Luckily, it wasn't on the carpeted floor! And if the email above seems silly it's nothing compared to the Schneider's Row series of reports....)

What a great story teller you are! Sorry about the foot Bernie hope it healed okay!!