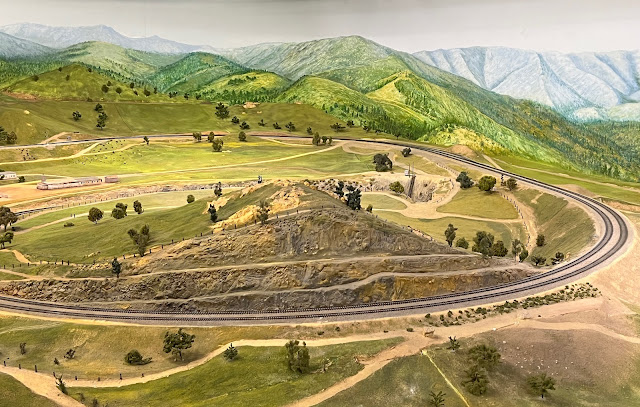 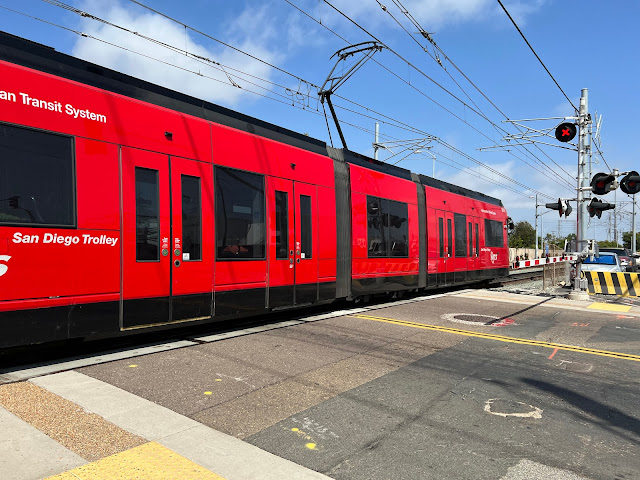 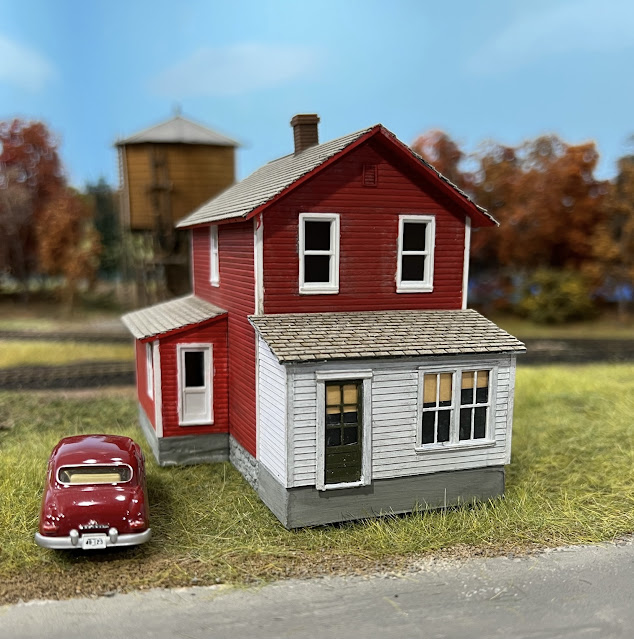 Before I left on my current work trip I got a start at building some houses that will eventually end up on Depot Street in Enosburg Falls. This one is started as a City Classics Company House kit. Although the houses I need to create the look of a small New England town in the 1940s/50s don't have to be fancy or large, the company house was just a little too basic. I dressed up the City Classics kit by adding an enclosed front porch using Evergreen clapboard siding and a Tichy window and doors. I removed the casement window that was part of the Tichy door casting. I also replaced the plain kit roof with Best Trains 3-tab shingles. I also painted the house red with white trim (the enclosed porch remained white) and added a Tichy chimney casting to the roof in place of the one included in the kit, which seemed a little small. Still need to add a ridge cap and the front and side steps. I can also see a couple of spots where the trim needs to be touched up. 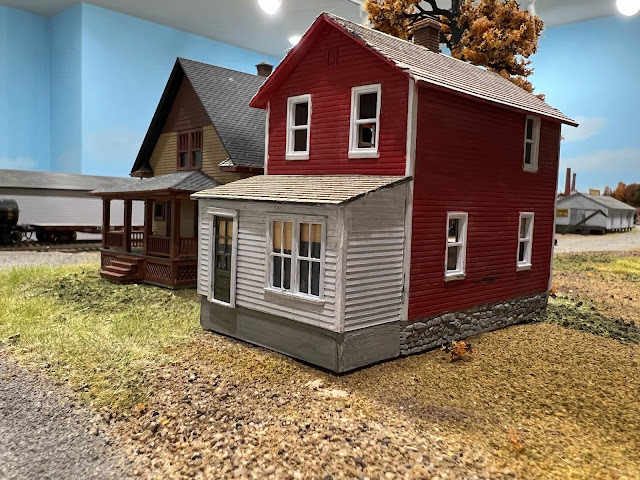 Eventually I need six or seven houses to create the impression of a residential street. I've gotten a start on a couple of others that I'll finish up when I get home. 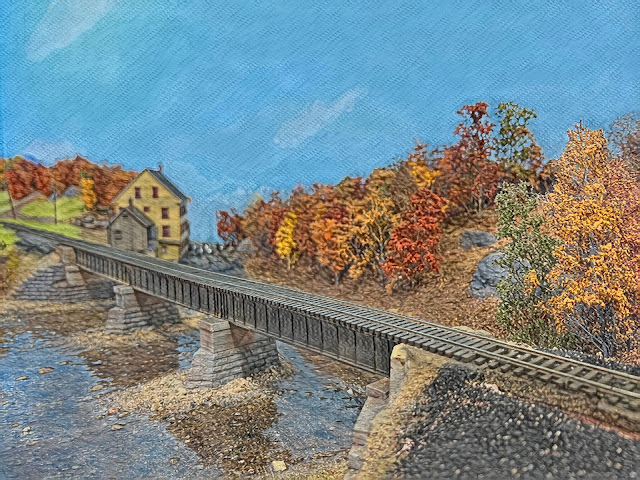 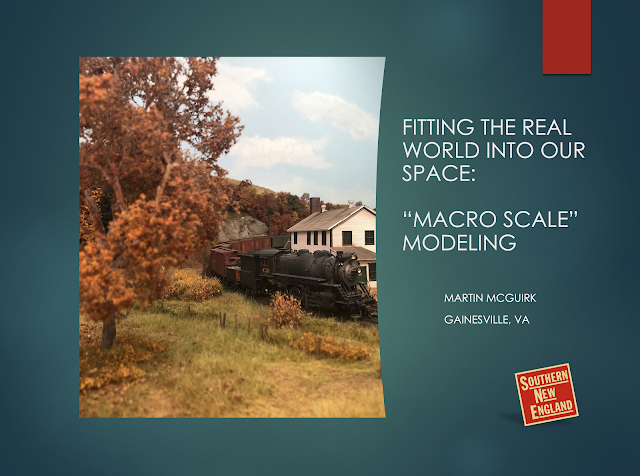 As a rule I prefer to give "how-to" clinics - I figure at least the audience members can look past my clunky presentation and at least pick up a tip or two!

But when I asked to present the keynote for the Railway Modellers Meet in British Columbia I decided to step outside my comfort zone and offer not a "how to" but a "why to do" clinic. Unfortunately I missed the chance to give this presentation in person, but I did an online virtual talk last night.*

In general the clinic went well. Nobody threw virtual tomatoes at me, and I didn't have any of the "CLINIC HELPERS" that I've written about before!

I'd give the clinic a solid C+. If we're grading on a curve I'd bump that up to a B-. Not bad considering some people (who I've never spoken to by the way) have written over the years to say I don't seem all that bright.

What's with this "Macro" Modeling?

The idea behind "Macro" prototype modeling is while we as model railroaders have gotten really, really, good at locomotives, rolling stock, some structures. But even if the individual models are superbly and accurately detailed sometimes our layouts fail to look much like the real world.

The talk somehow got split into two, not necessarily cohesive sections. The latter half focuses on three ways to make a layout look bigger - Selective Compression, Forced Perspective, and something I called "Controlling Viewing Angles." With some clarification and some more specific how-to examples I think these would form the basis for a talk titled "Expanding Your Layout Horizons" or some such.

That leaves the first half of last night's clinic. It seemed to me that it got a little muddy - I talked about the importance of identifying signature elements - those items that are "must haves" that firmly set the scene in a place and time - and I also mentioned how knowing what story you want to tell is an important aspect of model railroad design that's sometimes overlooked. In other words, a bunch of the pieces were there - but I don't think I clearly made the point.

Here's one slide from the clinic - I included it because I wanted to emphasize the "know what story you're trying to tell". Modern theme parks, such as Disney, MGM etc... spend buckets of money to create "immersive" experiences. Perhaps that idea should have been the basis on the first half of my clinic? A clinic that focuses on model railroads as "Immersive Story Telling" experiences? 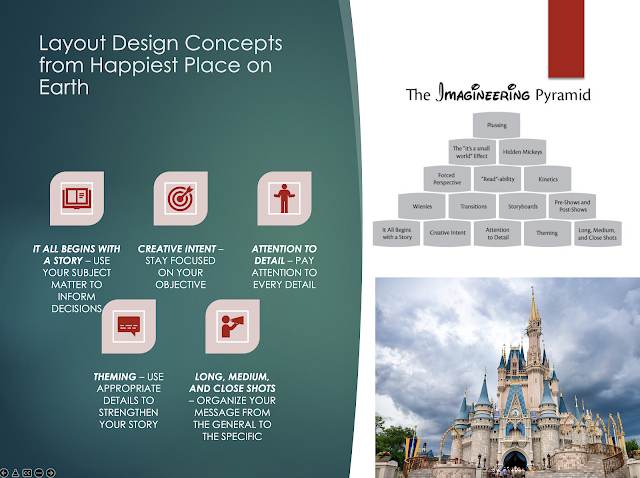 I didn't attempt to answer this question in my clinic and I won't be so bold as to elaborate on it here. A short answer is "I Think Model Railroads Can be Art." Detailed model building is really considered more of a craft - not "fine art".

I'm sure someone is already posting comments on how "such and such ... is a model railroad artist." Most of the time when we try to answer this question we focus on model railroads as visual art - after all really good artist/model railroaders use fine art techniques - they've mastered color, texture, and sculpting, augmenting that with mastery of the craft of model building - all that mechanical stuff like tight joints, no visible glue marks or out of scale elements.

But what if we expand our thinking beyond visual arts to include other art forms, such as story telling? Consider this - when someone asks you to describe your layout do you engage your left brain and rattle off a bunch of specs and minutia? Or do you relay the story your layout is trying to tell?

Close, But no Cigar

One of the keys of "Immersive Story Telling" is to immerse the viewer in the builder's vision. Upon reflection, I should have tied this back into the "Controlling Viewing Angles" portion of the clinic. I sort of did with this slide - which shows how the "alcove" area on my layout can be divided up into "interest zones" in order to make the layout seem larger. 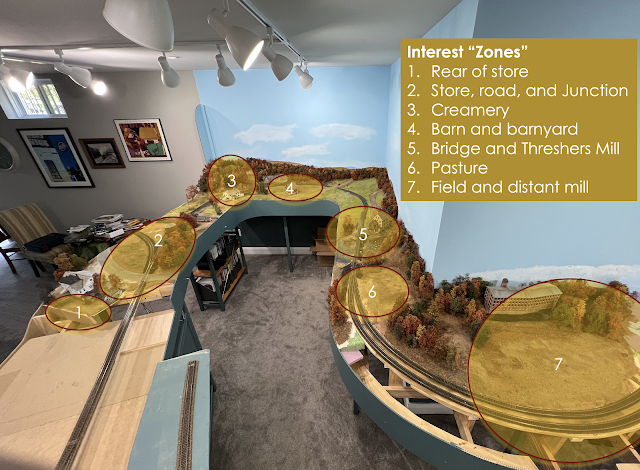 I could have taken this a step further and shown how this relates to the design of a theme park - with visual view blocks between each of the key "vignettes,"  an approach not only intended to make the layout seem larger, but that also contribute to immersive story telling.

Who knows, maybe I'll pursue this further. But I'm probably not qualified to ... you know, I'm not all that bright. 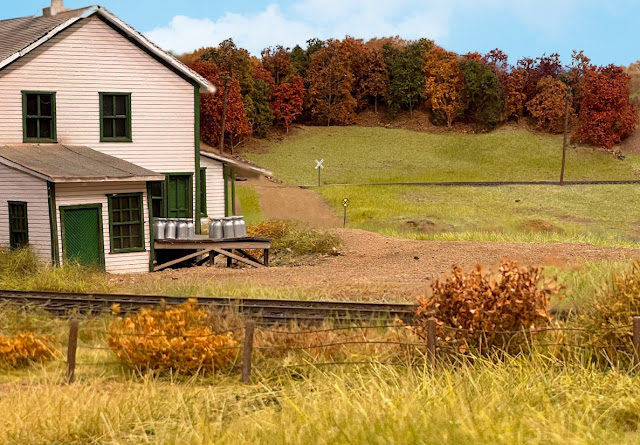 Planted the trees on the hillside behind the Williams Creek trestle. These represent the last of the trees my dad and I salvaged from the last layout - hope he's pleased with how this looks! I tried to gradually increase the height of the trees from the background to the foreground (left to right in the photo above). I think it adds to the effect of distance. I also cleaned off the water using warm water and a makeup sponge. I was shocked at how dirty the water was! But the stream itself looks better than it has in a long time.
Still need to do some additional textures on the bank opposite the mill building proper - and to add the details to the front of the mill building. 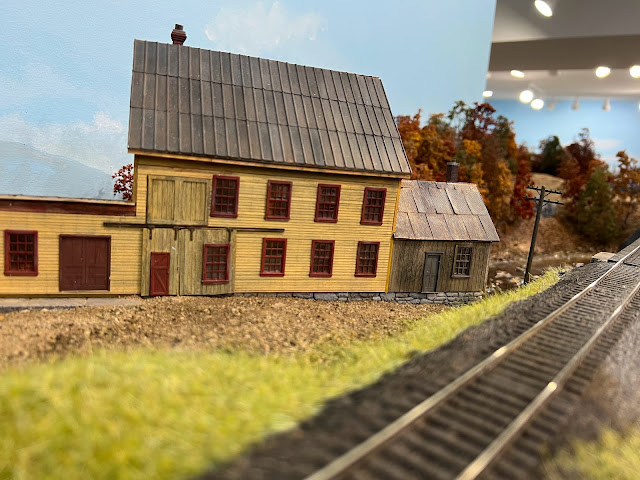 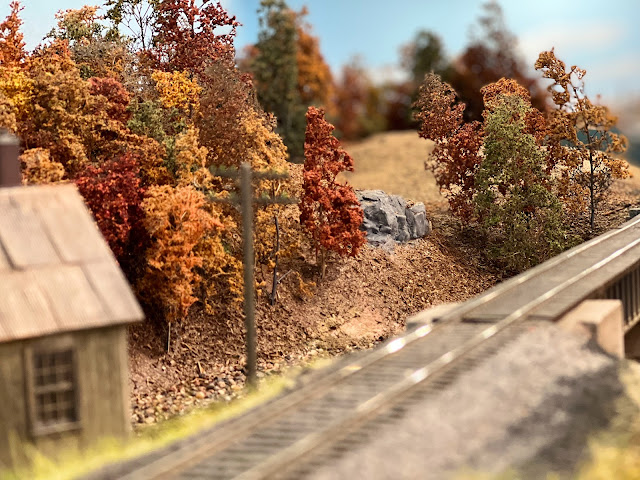 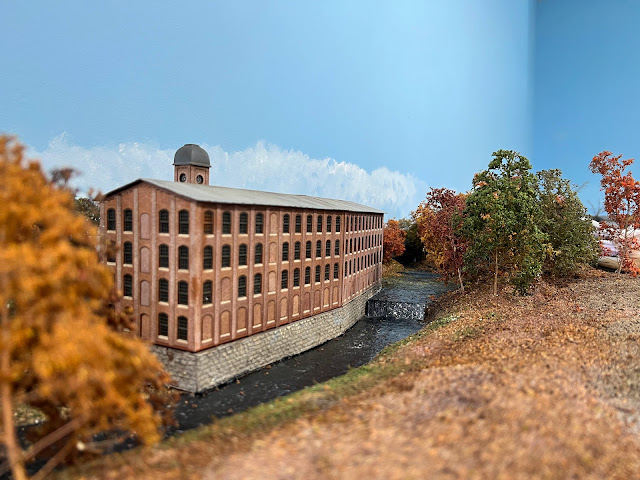 Glad I didn't spend more effort than I did on the covered bridge. After I got the smaller distant trees installed the bridge pretty much disappeared from view!

But I know it's there. 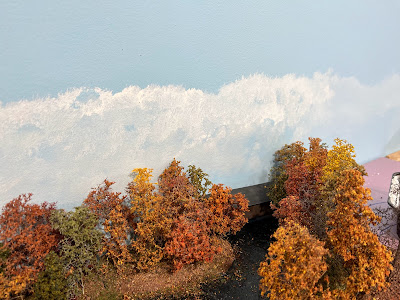 You can see if it you look really hard - of course you have to stand on a step stool and lean in over the layout ... but if you do that you'll notice it masks the joint between the river and the wall - which was kinda the whole point!