Replace a steel bridge with a wood trestle?

One of the most familiar scenes on my old layout was the Williams Creek* bridge. It was featured on the blog header several times. I also blogged about it on many occasions, including this post, which illustrates how it was actually in three locations (and two heights) on the layout. I also wrote a whole series of posts showing how I built and moved (and then moved yet again) the thing. So I've gotten lots of mileage out of it. 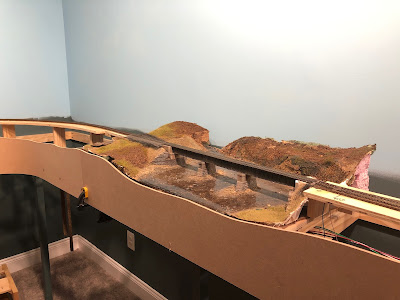 The Williams Creek bridge was built on it's own benchwork, meaning it was fairly easy to save when the layout was dismantled. In fact, it's the only piece of that layout I saved. As you can in the photo at right, it's been installed on the Richford Branch layout. It's just a little too long for the spot it's sitting in, but it does fit, although there's going to have to be some extensive and tricky blending of the river into the wall to fill a triangular-shaped gap. But it could be done. The question is should it.
What the Richford Branch had plenty of is wood trestles - right up to the point it was abandoned. What my layout has none of at this point are wood trestles. And precious few places where they would fit. However, one location that would be ideal for a trestle (or two) and some pastureland is the section where the Williams Creek bridge is currently installed. But as much as the Williams Creek Bridge doesn't really "fit" on the Richford Branch, a scene like the one in the George Corey photo below would truly capture the essence of the prototype: 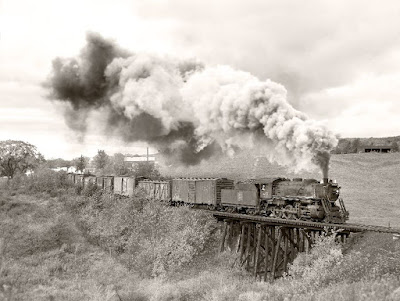 Although I'm making every effort to avoid the "do-loops" which produced nothing but lack of progress on the previous layout, I think this one change may be appropriate. I can always keep the Williams Creek Bridge as a photo diorama.

*The name Williams Creek is not the prototype name for this bridge - it's named in honor of my college roommate and best friend, Brigadier General Zeb Williams, USA, Ret.

Well the wooden one is a nice fit. But the steel bridge just seems like a perfect fit. I would keep it.

The steel bridge is really nice, and I would hate to lose it. But then, I'm really partial to wooden trestles. :-)

The wood trestle scene is neat. Tells a different story. Make the switch when the time is right.

Love that steel bridge, but wooden trestles are great too! (don't see a ton of those on layouts these days) I imagine the solution will reveal itself soon enough.

Honestly, the fact you raise the question means you feel you are compromising on your vision. While I do love that steel bridge and how it has become an icon of your work over the years, I feel you should go with the wooden trestle. I recently visited the area and feels it would makes more sense. However, I think you could keep the steel bridge on spot for a while. As you said, adding more work to an already immense task isn't a great idea. When most other scenes will reach a satifying level, you can build the wooden trestle. That said, the steel bridge being mounted on its own benchwork, it would make a terrific diorama to shoot pictures of rolling stock and motive power! The decision is yours... and think you should give yoruself time to think about it.