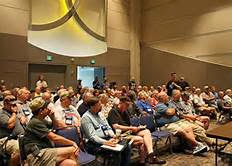 I usually don't delve into editorializing on this blog, but this subject is near and dear to my heart. Clinics are a large part of many model railroad conventions and meetings. The overwhelming majority of people I've met through model railroading have been polite, well adjusted folks who have always offered me their sincere thanks for taking the time to prepare and present a clinic.  And, whether you agree or disagree with what a clinician is saying, I think it's important to remember a little common courtesy will go a long way towards making the event a more pleasant experience for everyone.
An ongoing discussion on the Steam Era Freight Cars Yahoo Group centers on clinic etiquette, specifically the tendency of some individuals to, for lack of a better term, "hijack" another presenter's clinic. Apparently several attendees noticed this during the recently concluded Cocoa Beach RPM meet.
I wasn't at Cocoa this year but it is a phenomenon I've noticed at numerous NMRA and RPM events. I've given, and attended, my share of clinics over the years - some I think have been pretty good, others, well, let's say anyone can have a bad day and leave it at that. I certainly do not make, and have never made, claims of perfection (just ask anyone who knows me....) but I've learned a lot since I stood trembling at the front of the room to give my very first clinic back in 1985 or so.

I'm basically a reserved person who does not relish speaking to large groups. I’ll do clinics when invited but I have never actively sought out speaking engagements of any type. Over the years I've had some wonderful feedback after and even during my clinics and I'd like to think my presentations have been better for it. And I have no issue whatsoever with someone asking a question during a clinic.  I find questions are usually easily dealt with in real time without unduly impacting the flow of the clinic.
It’s important to be sensitive to the fact that attendees at any clinic range from those who know more than the clinician, to those with a passing interest in the topic (such as the area served by the railroad, the time period etc...), up to and including those who fell asleep during the previous presentation!

Let’s face it, over time in some subsets of the hobby (such as steam era freight cars) we’ve learned "more and more about less and less." Trying to judge where to draw the line on information presented during a clinic is a tightrope - how much is too much, or too little information? You can't assume the same level of interest or prior knowledge of the subject matter.
You have to consider the audience. While the nuances of New England geography may be obvious to you, or me, you have to remember that's not the case for everyone. I'll never forget getting through an entire talk on Essex Junction only to have someone ask "Now, where exactly is Vermont? Somewhere around Pennsylvania, right?"  So now every CV-related clinic I give includes a slide showing a map of New England in context with the rest of the country. "The six little states in the upper right-hand corner..." is how I typically introduce this slide. Is such a slide redundant at the New England Prototype Meet? I hope so. But it certainly isn't when I'm giving that same clinic in Santa Fe, N.M.
A number of years ago I attended a clinic on SP&S freight cars (a topic I know less than a little about). The clinician had done a good job outlining the various types of cars, paint schemes, etc… stuff a non-modeler of the SP&S might want to know but he failed to get through all his slides thanks in no small part to the stream of drivel, factoids, and other minutia from one buffoon who felt the need to share everything he’d ever heard, read, or otherwise could regurgitate on the subject.
In other words, a clinic hijacker.
I believe that's what the fellow on the Steam Era Freight Car list was referring to – loud mouths who, in my experience, fit one of three broad categories:
(1) Those who feel the need to comment and joke on everything. Usually they think they’re being funny. Mostly they're not. Stand-up comedy is a profession. Leave it to the professionals.
(2) Those who feel they are having a one-on-one conversation with the clinician; and
(3) Those who seem to feel they should be giving the clinic, but they weren’t asked – so they simply try to give the clinic “ad hoc” (such as with the aforementioned SP&S clinic).
I've found the easiest way to deal with all of these characters as a clinician is to politely tell them "We have a lot to cover, and we haven't gotten through the information yet. Please hold your comments to the end.”
This seems to placate the vast majority of them. On only one occasion that I can recall that didn’t work. This was back in my early clinic giving career, before I'd learned some other ways of dealing with disruptive audience members. This individual was fairly belligerent – an unfriendly tone with extensive comments on what he felt was important about each slide - and his constant interruption caused me to lose my train of thought completely. Not knowing what else to do, I turned off the projector, sat down in the front of the room, and asked him to let me know when he was finished talking. Some other audience members took over at that point and that individual wasn’t a problem after that.

Well said Marty.
It's hard enough to do a clinic as it is.
It's akin to the "When I build my layout..." crowd who always have the answer after you admit to a problem. No clinician needs helpers.

I was in a session this past July at the NMRA National in Atlanta where that happened. A gentleman couldn't help but comment on everything - interrupting the flow of the presentation and adding no value. My wife, who happened to be sitting in with me, commented that people like that should stick to commenting on YouTube videos. I felt really bad for the presenter - and everyone else in the room. I wish the presenter had done as you now do - ask him to hold it all to the end. (Of course he probably would have exploded!!)

Been to a few local clinics where the same individual feels the need to comment on everything, year after year after year. It is something we all have grown used to after all these years, but I am sure the presenters are rattled. I'd name names, but... HA!

Thanks for bringing it right out in the open. Nicely done.

Really good points, Marty! While I've certainly participated from the audience a few times, but it is the presenter's clinic. You have to assume that the people in the room came to hear what the presenter listed in the program had to say.

From the presenter's perspective you can simply ask people to hold the comments and questions for the end as "we've got a lot of material to cover and not much time, please feel free to approach me after the clinic" or hold it to simple clarifications. Once when I was doing my "Phones for Ops" clinic I had a guy with a very different perspective who kept popping up and and advocating his approach. I finally told him that if he knew what he knew he was not my intended audience (e.g. regular modelers who could wire a layout but didn't know about phones) and suggested that he prepare a clinic on his approach for next year's meet.

He left the room and was never heard from again

Beware when an audience member asks, "Isn't it true that ........?" I have found these kind of questions presage a disruptor. If I sense that is happening, I tend to answer questions like that with a terse answer, like "yes," "no," or "I don't know" and move on. They usually get the hint.

I ran into a guy like this at a talk to an historical society. In that case the event organizer spoke up and told him to be quiet.