A glimpse into my modeling past

I stumbled across this photo (actually, a 35mm slide that I scanned) the other day when searching for some other images. The two cars in the foreground are nothing to write home about except they represent several “firsts” in my modeling and writing careers.
As a rule I don't get emotionally attached to models that no longer meet my needs or those I feel don’t live up to my current standards. Years of frequent moves have made me pretty brutal when it comes to deciding whether to keep, sell, or even pitch old models. But for some reason I’ve kept both the NH boxcar and the milkcar. I doubt I’ll run them on the layout in regular service,  but I couldn't resist taking them out of the display case and posing them on the current layout. 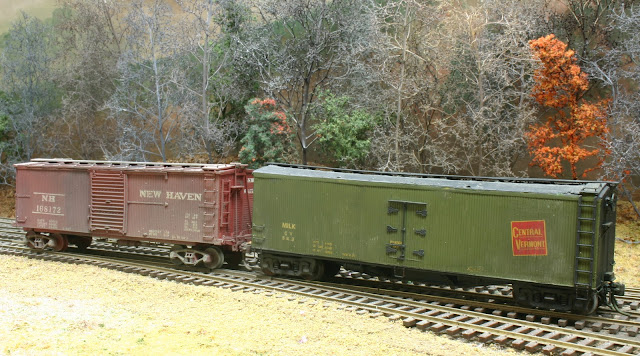 About those "firsts." The New Haven boxcar, most likely a New Haven Historical Society kit made by Funaro & Camerlengo, was the first resin house car kit I’d built. Interestingly, F&C has just recently re-released these cars, this time with one-piece bodies. When I built this one I didn’t realize you should always verify the lengths of the two sides are the same, and sand them if necessary – so the car is somewhat out of kilter. Also, I didn’t quite get the grab irons on straight. Finally, since I didn’t brace the inside of the car over time one of the side walls has developed a slight bow along its length. 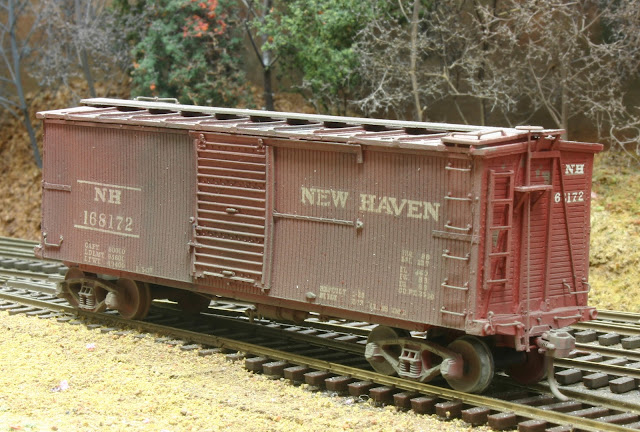 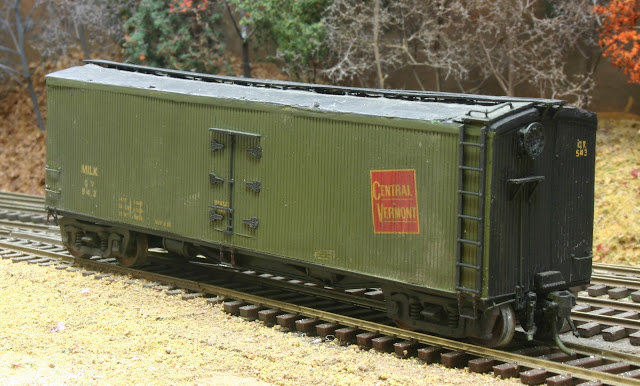 The Central Vermont milkcar is also a first. It’s the first piece of rolling stock I ever scratchbuilt. I’m not positive, but I believe I built this model when home for the summer between my sophomore and junior years in college. I based the model on measurements I took of a car sitting outside Barre, Vermont. The underframe is from a cut-down Athearn express reefer that I shortened by cutting 10 or so feet out of the center and gluing back together. The car body is constructed entirely of styrene. The roof is tissue paper held in place using a heavy coat of Floquil paint. It melted the paper into the plastic. I’m not sure, but I believe the hardware came from a Grandt Line – likely a narrow gauge reefer set. The car was brush-painted using SMP Accu-paint since I didn't have an airbrush at the time. Accu-paint was as thin as printers ink, so it probably took 10 coats to get decent coverage, although there are still some "holidays" visible in the paint finish.
The trickiest part of the milk car was the lettering – I used a New England Rail Service steam locomotive and milk car decal set for most of the car, although the “Milk” lettering in the NERS decal sheet didn’t match the prototype photo I followed. So I pieced the “Milk” lettering together from an alphabet set of dry transfers.
Both models in the lead photo are posed on the layout I had in my parent’s basement. This is also the only picture I have of that layout, which remained in my folks basement for many years after I moved out. The backdrop was hand-painted, and the trees (I was modeling autumn even then!) were made using several types of weeds with ground foam applied and colored using some of the tips and techniques in an RMC article by Les Jordan that appeared in the October 1979 issue of RMC.
About that publishing first… I wrote an article on how I built the milkcar and submitted it to RMC. Editor Bill Schamburg, a good friend to this day, expressed an interest in it, but said I needed better photos.  Believe it or not, the photo at the top of this post represented my best effort at the time.  Bill looked it over and sent it,and the article, back to me. My old camera and equipment weren't up to the task of taking publishable model photos.
In looking at the old photo, I’d give the technical aspects of the picture a D-. However, the scenery, although crude, wasn’t that bad. Say a C+. I won’t attempt to grade my efforts at the two cars, but it sure was fun finding this photo.