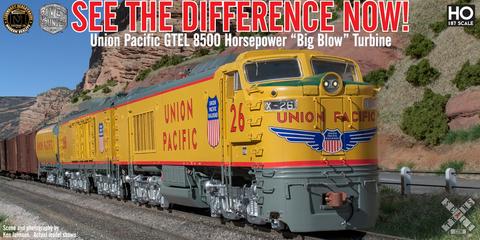 With all the neat new stuff coming out in what one friend of mine described once as "designer plastic" - especially in HO scale - it's easy to feel like a kid in a candy store.

Impulse buying is not necessarily a bad thing - after all this is a hobby and as long as you're not taking food away from the table for indulges like model railroading no harm no foul.

One of my favorite prototype locomotives because they're just cool is the Union Pacific's turbines. Besides, what railroad other than the UP could get away with calling a locomotive the "Big Blow." (I actually prefer the N&W's "Jawn Henry" - but come on, no one will EVER make that in plastic, will they???).

Enter the Scale Trains Union Pacific Turbine. I saw these announced a few months ago and immediately passed since well, you know they aren't really a "fit" for the Central Vermont.


What if, just maybe, my prototype freelanced subsidiary of the CV, the Southern New England, acquired a few turbine sets???? I mean, someone made GG-1's painted for the SP Daylight and I've even seen an RGS Galloping Goose painted in a Santa Fe Warbonnet!
Imagine if you will a set of Big Blows painted green and yellow ... what a wonderful sight they would make winding (and screaming!) their way through my depiction of the tranquil New England countryside.


There might be some, uh, "operational challenges" to overcome. Consider the wood overpasses and covered bridge over the tracks just south of Everett....the equivalent of jet exhaust might take it's toll on the century+ old wood?


On second thought, maybe not. Perhaps Bernie should get a set to switch the LAPT?
Posted by CVSNE at 9:20:00 AM

Hi Marty:
I've joked with friends that if ScaleTrains.com did the Big Blow in Mike Confalone's "Allagash" colors, they'd sell a ton of them to MRH subscribers...
Cheers!
- Trevor (Saved by S Scale, where there's almost nothing... but that doesn't explain what a CNR 2-10-2 is doing on Port Rowan in 1:64...)

Marty,
Go for it !
The green & gold would look awesome.
A freelanced deflector would take care of the exhaust issues (It worked on helicopters).

Hello Marty,
I have just joined your Site as I do like and appreciate your 'before' & 'after' photos and text concerning your CV Layout's scenery, structures and buildings. I can certainly learn a great deal from your efforts and achievements. Many Thanks. KEV.