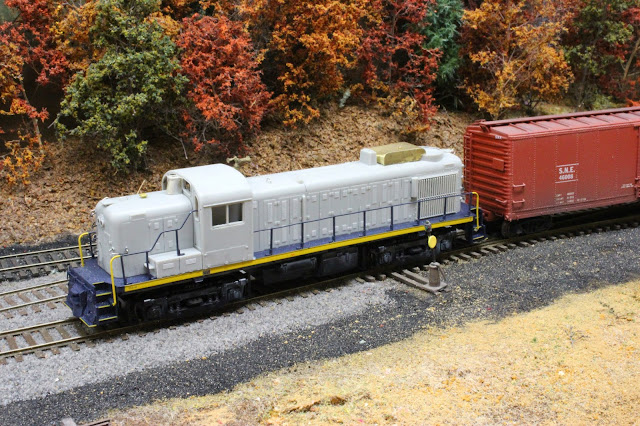 As I mentioned in the previous post, I've been working on three different projects over the last few weeks as time, interest, and available materials dictate. 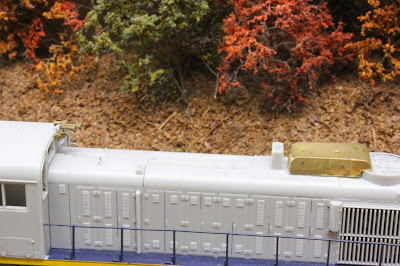 One of these is to at long last get some of the "orphan" locomotives (I have engines on the layout painted for everything from Reading to B&O to Erie, to Western Pacific…) into more appropriate colors.
I apply the same rule to the diesel fleet that I do to the steam locomotive roster.
Locomotives that match a CV prototype get painted and lettered for their prototype (brass steamers, for example, like the 450 in the blog header art).
But if it's a Bachmann 2-8-0 fleet engine it will get some minor detail enhancements and get painted and lettered Southern New England.
That's the case with a quartet of Atlas RS-3s that I'm working on.
Yes, the CV had RS-3s, but they were Phase 3 RS-3s. The Atlas model isn't. 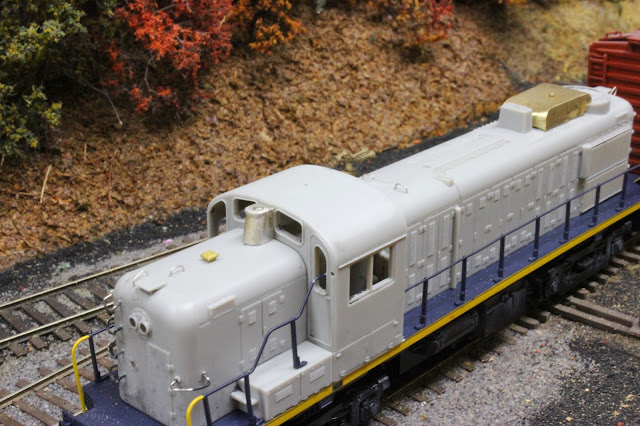 At this point the engines have had some "CV family" details added - primarily a new horn and bracket, a steam generator stack, lift rings, and a winterization hatch.
(Unfortunately I ran out of winterization hatches, so I need to find some more or scratch build the things for two of the engines.)
My hope is I can get these into the paint booth and onto the rails in time for the next scheduled op session.

Marty:
This is a terrific way to combine the satisfaction of prototype modeling with the realities of trying to find appropriate equipment. Done carefully, one should be able to build a convincing roster without stretching plausibility. I can see this also being useful for filling out rosters of freight cars, passenger cars and cabooses. Very inspirational!
- Trevor (who models in a scale that often means accepting compromises, because "S" is for "Sorry - that was never made"...)

Port Rowan in 1:64
An S scale study of a CNR branch line in Southern Ontario - in its twilight years.
http://themodelrailwayshow.com/cn1950s

Thanks Trevor!
"Prototype freelancing" (a term I think is pretty silly, it's either freelancing or it isn't) is somewhat out of vogue these days, but I find it's a useful way to get from here to there, especially with the demands of a full time job, other interests, AND a large layout.
I fully acknowledge that some of my friends are a little confused by this, but I like the opportunity to let my hair down from time to time and not worry quite so much about every little detail.
Take the 2-8-0s for example. On the layout, during an operating session a Bachmann 2-8-0 with a red tender herald and a few additional details and weathering looks "right" - it's not "accurate" of course, but frankly they run better than the brass imports and if someone elbows one off the layout I can shrug it off a lot easier than if the same thing happened to one of the brass engines.
It's the difference between a realist painting and an impressionist. Some days I'm the former, other the latter.
My goal is to get the layout to appear "complete" - that necessitates from compromise.
I'm not saying anything new here of course, Allen McClelland summed it up with oft-misunderstood phrase "Good enough."

Hi Marty:
As you've pointed out, the Bachmann 2-8-0 runs better than brass. I wonder which is more detrimental during an operating session? A semi-accurate SNE 2-8-0 that runs smoothly at all speed ranges but, perhaps, does not have the exact boiler profile? Or the perfectly rendered miniature of a CV 2-8-0 that jerks or jackrabbits? Certainly, for photographs, the brass cannot be beat. But for running? I'd want whichever model lets me forget it's a model, so I can concentrate on the time table, the waybills and the other aspects of emulating a real railroad...
Cheers!
- Trevor

Of course, with a fair amount of effort you can get the Bachmann 2-8-0 to be virtually identical to the brass imports - I often line up the model Iain Rice did for me next to an imported model of the same locomotive.
Yes, there are differences.
On the layout they're virtually identical and most people can't pick out the Bachmann engine from the brass one. (Until they start running them, that is!)

Marty, If you had a choice of numbers on a CV phase 3 RS-3 would you model the original #'s or the renumbering. I may send Bowser a suggestion on their future phase 3 RS-3 project. JOHN

1859 and 1860. They were the as-delivered numbers and they wore them on the CV longer than the 39xx series numbers.