The University of Vermont maintains an excellent web site that includes a number of vintage images of the Vermont countryside. I check the site from time to time since they are obviously still adding digital versions of these old prints to the online collection.
This image dates to 1938 (there is also one available for 1940 - enter "Waterbury-aerial-1940" into the search window on the UVM site). Clicking on the photo should take you to the UVM web site where you can select the "Zoomify" tool - a little magnifying glass icon - and zoom in on different sections of the photos. 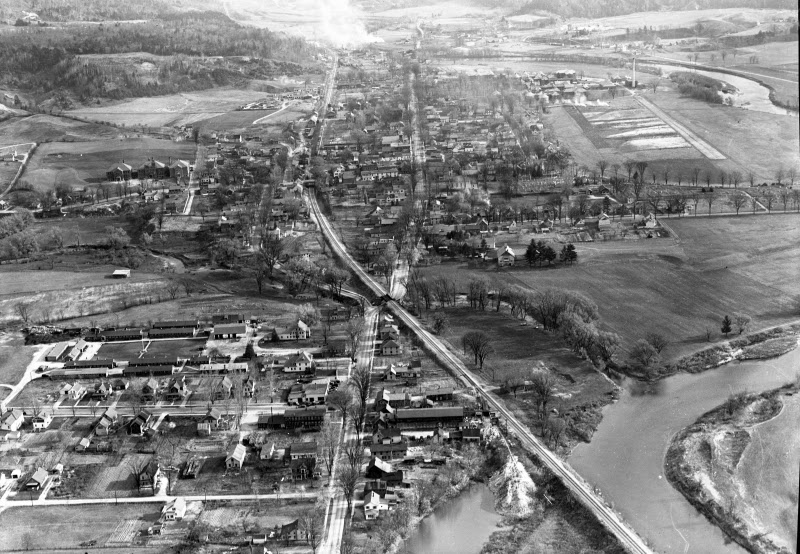 A few notes:
1. Starting at the station area, you can follow the mainline to the top of the photo. The way the track curves to the left is the inspiration for the way the mainline bends around the end of the peninsula on my layout.
2. You can clearly see the station area, with the feedmill, coal sheds, and a creamery just beyond the station.
3. There's a large industry across the tracks and just north of the station. I believe this might be the Pilgrim Plywood plant, but I'm not sure.
4. In the far distance (where the mainline curves to the left at the top of the image) you can make out the Demeritt Canning Co. to the left of the track. Derby & Ball is to the right.
5. The "Rock of Ages" shed would become the Cooley-Wright foundry during my modeled era.
And, if you're not particularly interested in Waterbury you'll find similar aerial views (and lots of views from ground level as well) of Essex Junction, White River Junction, Randolph, Burlington, etc...

Email ThisBlogThis!Share to TwitterShare to FacebookShare to Pinterest
Labels: Waterbury

Marty, I could never figure out what that sign was stenciled on the roof of that structure, ROCK OF AGES, I used a photo from one of the CV hardcover books and made a condensed version of the above. I will consider lettering the roof. After looking at the photo I came pretty close to positioning the structures with the photo material I had to work with, I just wishI had this material sooner, I would have given Waterbury more space on the layout. On a related note, I am in the process of having a laser kit made of Waterbury station. At a CV meeting. in Waterbury a couple of years ago an announcement was made that a commercial kit was going to be made but it was cancelled. I ripped up a section of the layout to accommodate this scene not knowing that the station wasn't going to be produced. I began to scratchbuild the structure from photos, then plans in the model railroader were published, took them to a commercial laser art builder of model homes for real estate agents and he said no problem doing this project, pricey but worth it. Keep that info coming Sincerely JOHN HAJNOSZ CVRHS